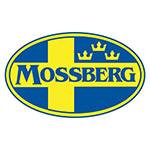 Mossberg is the oldest continuously family owned and operated manufacturer of firearms in America, in business for over 100 years … and they’ve never stopped raising the bar …