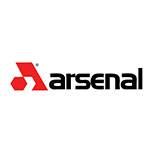 Tracing its history all the way back to Bulgaria’s first armory in 1878—and forward to modern day Las Vegas—Arsenal is the premier importer and provider of some of the world’s finest AK-style rifles.

Arsenal Inc. was founded in 2000 as the licensed domestic manufacturer and distributor of products from Arsenal AD in Bulgaria. That gave American shooters a direct line to the Bulgarian manufacturer well-known for producing some of the Soviet Union’s finest AK-47 rifles.

Arsenal’s rock-solid AK-pattern rifles come with hammer-forged, chrome-lined barrels available in a wide variety of calibers—from .223 Remington and 5.45x39mm to the classic 7.62x39mm.

With a reputation for exceptional quality and top-notch construction, Arsenal’s various rifles—including the SLR-FR series of folding stock, stamped-receiver AK-variants and the SAM7R AK-variants with milled receivers—are some of the most coveted and collected rifles in America.

Known for flawless feeding and immaculate performance, you can never go wrong with Arsenal magazines. Arsenal products come with a one-year limited warranty to ensure reliable function and superior craftsmanship.