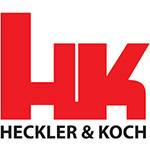 From the iconic MP5 to the G3 battle rifle, the USP and its cousin the Mark 23 pistol, few manufacturers can claim the same level of success and recognition as Heckler & Koch, or HK for short.

Founded in the aftermath of World War II, originally using dismantled machinery to produce parts for bicycles and sewing machines, Heckler & Koch came into their own in 1956, when they responded to the West German government’s need for a new service rifle with their G3.

Just over a decade later, HK made history with the first iteration of their now-classic delayed blowback MP5 machine pistol, and the rest is history.

While many of their weapons are hard to buy as a civilian, each one has been battle proven and most are still today trusted by members of Special Forces, SWAT and special police units.

Even newer models like the G36, MP9, UMP, HK416 have developed a huge following despite their often-exorbitant prices. Their commercially-available pistols like the VP9, VP9-SK, HK45 and P30L have become popular choices for competition and concealed carry.

HK magazines are produced to the same level of finish and quality as HK’s firearms, with no compromises made in terms of reliability, fit and function. So you can buy with confidence, knowing you’ll get a magazine that keeps up with the world-class performance of your favorite HK pistols.

There is some interchangeability between different HK pistol magazines, so pay close attention to each listing to see which magazines will work with which different guns.

Scroll down to check out our HK magazines: