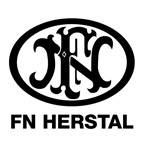 Founded in the small Belgian city of Herstal all the way back in 1889, Fabrique Nationale (FN) has become a world-class producer of combat-firearms and next-generation equipment.

During their early history, FN manufactured a wide range of motor vehicles (including cars, trucks and motorcycles) in addition to firearms. But their early partnership with firearms legend John Moses Browning solidified destiny toward becoming both an innovative and practical producer of combat-ready firearms.

From their early Model 1910 pistols to Browning’s “GP35 High Power” (soon to be known as the iconic Hi-Power) and the legendary “Ma Deuce” M2 Browning Heavy Machine Gun, FN was making a name for themselves. By the 1970’s, the FN FAL was already one of the most widely-used service rifles in the world.

On the modern battlefield, their weapons can be found in service all across the globe. That includes the FN SCAR battle rifle in 7.62x51mm—a favorite of Special Forces like the Navy Seals—to their Squad Automatic Weapons (SAW) like the M240, M249 and FN Minimi and American made M4 carbine rifles.

FN has also been a key innovator of small arms and pistols, including the P90 and FN Five seveN (both chambered in a proprietary 5.7mm cartridge) to the police-ready FN-509, FNX, FNS and FNC pistol.

Newer designs like the FN SLP shotgun and FN Ballista bolt-action rifle have garnered even greater acclaim over recent years as FN continues to push the boundaries and innovate—never content to settle for mere perfection.

FN maintains a manufacturing facility in Virginia and South Carolina under the “FN America” subsidiary, where contracts are filled for US military firearms. Each of their products comes with an implied lifetime warranty, with users reporting quick and reliable service from FN USA.

FN factory magazines deliver the same quality and combat-ready performance we’ve come to expect from their top-notch firearms, ensuring years of reliable operation at and consistent feeding at good prices.