Small guns are where the industry has been sitting for quite some time. This goes for all types of firearms in the industry. Concealed carry guns are insanely small and popular, with the SIG P365 being wildly popular and a best seller. Weapons like the Shockwave are mini 12 gauges, and they are also insanely popular. SBRs have never been more popular since E-Form 1s get processed in weeks instead of months. Also, rifle caliber pistols have never been more popular, and that’s where we land today. We are looking at the Saint Victor AR 10 pistol, and it indeed sits in a category by itself.

I know what you are thinking, why would anyone want a 308 caliber pistol. Intermediate calibers like the 5.56 and 7.62×39 are okay out of short barrels, but a full-powered rifle round seems silly. The Saint Victor AR 10 pistol sports a 10.3-inch barrel, and that’s quite short for such a powerful caliber. 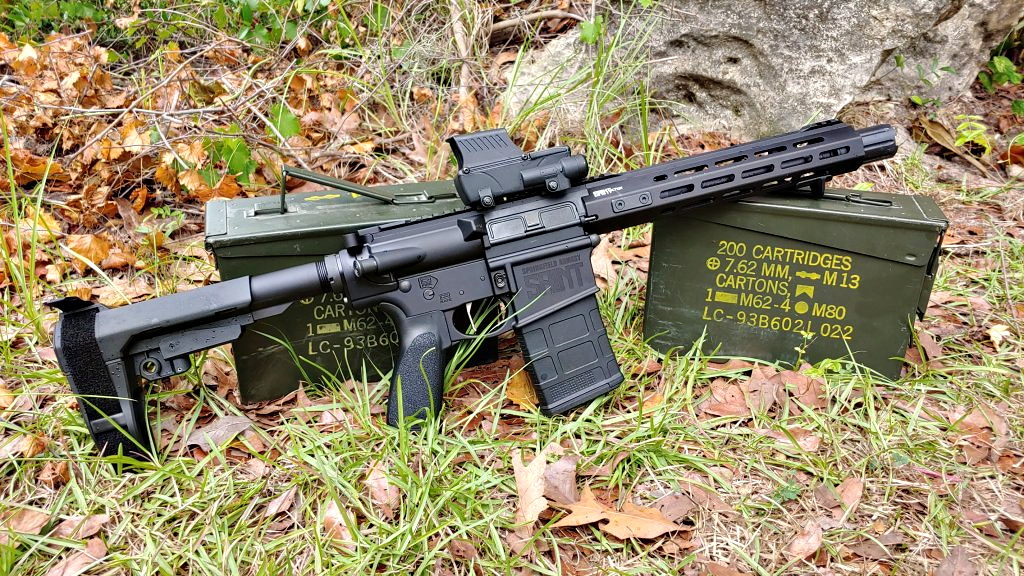 The velocity takes a beating, and with 147-grain FMJ loads, you are losing 400 feet per second when measured against a 20-inch barrel. That also affects your effective range, but with a AR 10 pistol, I doubt long-range shooting is your game.

The biggest reason I can think from a practical perspective is for a short and compact weapon you can strap to an ATV or similar off-road vehicle and have a lot of power in a tiny package. This gun would be quite capable of dealing death to coyotes, hogs, and even bears. A 308 you can fire quite rapidly is a potent tool.

Especially for herd animals like coyotes and hogs, and having the ability to drill a mad bear a few times is convenient, to say the least. Also, like a pistol, it might be legal to open carry in a place where a rifle is not, and it might be legal to have in or on your vehicle loaded and ready versus the requirements for a rifle. 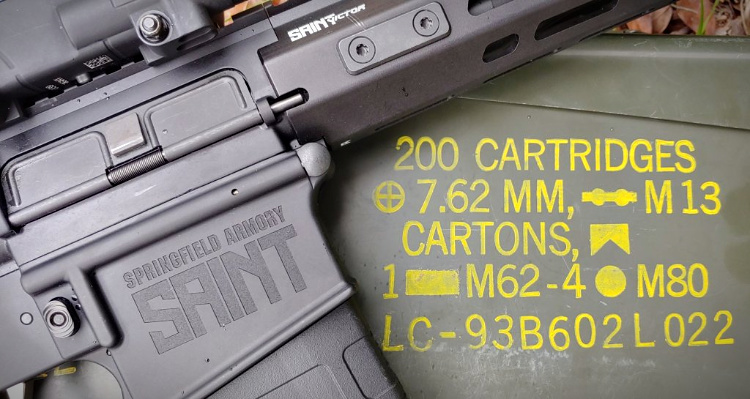 On the other hand, practical is nonpractical, and the most nonpractical reason for this to exist is this is America, pound sand. I want something loud and vicious and mean, and I want it now. I also want it in a platform that’s super easy to upgrade, easy to shoot, and is a proven platform.

As we mentioned, the barrel is 10.3 inches long, and the overall length with the brace collapsed is only 28.25 inches long. The gun weighs a rather hefty 8 pounds and 6 ounces. The weight is mostly in the center of the weapon, which makes it somewhat well balanced. It’s heavy, but not annoyingly so. 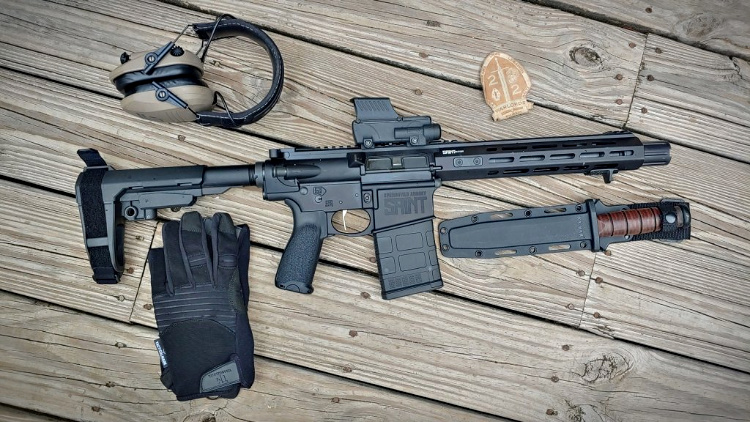 The Saint Victor AR 10 Pistol is the mid-tier Springfield AR, and this particular AR 10 pistol is not available in the plain Saint or the Saint Edge line. The Victor series gives you some basic upgrades that are quite nice to have.

The most obvious upgrade is the M-LOK free-floating handguard. This handguard is also designed to be super light, and Springfield trimmed the rail section along the top just down to a point to mount a front sight. The handguard is also superbly slim and allows you to get a very excellent grip on it.

The trigger is a flat-faced nickel boron design that is quite smooth and grit-free throughout its travel. It’s a single-stage trigger that is rather impressive to be included on the gun. The pistol grip is a BCM Gunfighter grip that I always love and appreciate. To the rear, we have the pistol brace, which is my personal favorite, the SBA3. This brace collapses and allows for five different positions for comfortable forearm strapping.

Moving to the tip of the barrel, we have a two-piece blast diverter that is very much a needed device on this little pistol. It’s designed to propel blast and concussion forward of the shooter. With a barrel this short in a caliber this potent, then you need this device. There is also a handy handguard to make sure your hand stays behind the muzzle with a C-Clamp style grip.

It’s so &^*(%$# loud. The gun’s brutally loud, and I love it. I don’t have fillings because my teeth are perfect, but if I did, I would feel this gun in my fillings. It’s so much fun to shoot and best described as obnoxious. The two-piece muzzle device does an excellent job of propelling the blast forward and away from you as the shooter. The muzzle flash is there, but not blindly or discomforting. I wouldn’t shoot it indoors at night though. 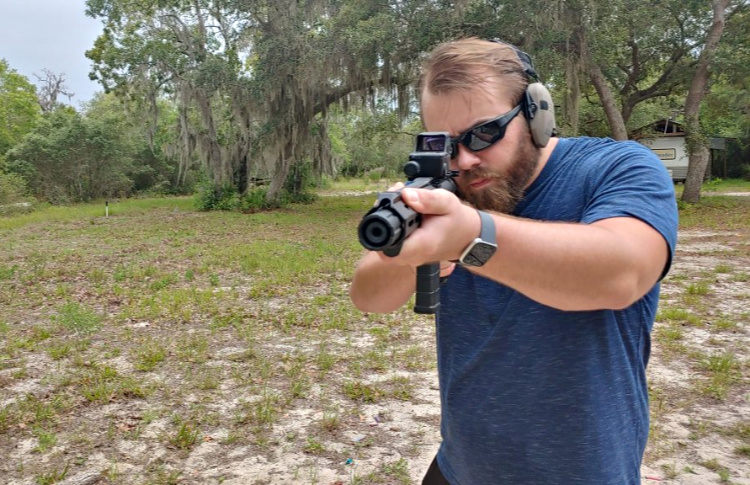 The recoil is there, but it’s not uncomfortable or painful or anything crazy like that. The muzzle rise is most certainly a thing here, and it jumps a bit with every shot. You can recover pretty quickly and get a follow on shot off. You can shoot fast enough to get a decent par time with a failure to stop drill.

The barrel must be pretty thick because it takes a bit for the handguard to heat up. After about a hundred rounds of 308 fired rapidly, you’ll feet the heat, though. It’s not painfully hot, but it can get there if you run rapid-fire drills back to back over and over. It’ll get to the point where gloves are a must-have.

The Saint Victor AR 10 pistol doesn’t come with sights, so I strapped on a Meprolight Foresight, one of my all-time favorite optics. Accuracy with 147-grain M80 rounds wasn’t bad. I used a healthy dose of Atlanta Arms 168 grain precision loaded ammo, which made a big difference in my group size. They shrunk by about a quarter at 100 yards. One hundred yards is where I could max out my range, and at 100 yards, my best group was 1.5 inches with the precision loaded ammunition. 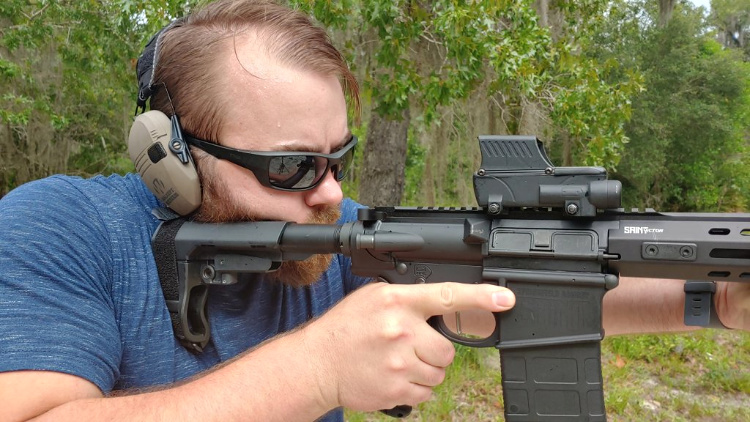 The more disposable 147-grain loads are a bit cheaper, and I got a few functional 1.75-inch groups, but 2 inches or so were more average. Keep in mind this is an AR 10 pistol and not a rifle. 2 MOA with cheap ammo isn’t bad. I’d hunt with that and trust it for closer range engagements.

Reliability wasn’t an issue, with the current ‘Rona scare I was only able to shoot a few hundred rounds. I did test various sot and ballistic tip ammo types. These rounds are common for hunting, and they feed and cycle fine.

This gun brings the boom. It’s so loud and obnoxious; it’s hard not to be charmed by it. The Saint Victor AR 10 pistol is a little Warhammer. If you miss with your swing, you might regret it, but a can of man and some training will help. This little guy is a ton of fun, and while it might be purposeless to most, the Springfield Saint AR 10 Pistol is a well-made weapon that shoots straight and shoots reliably.