I’ve long been a fan of Smith & Wesson guns. While I don’t like everything the company has done – internal locks on revolvers, for example – more often than not, they seem to get it right.

When the first generation of M&P striker-fired pistols came out a few years ago, I immediately liked them. The guns felt good in my hand, were extremely accurate and looked a lot better than some of the alternatives. Nevertheless, my Glock 19 was still my go-to self-defense gun.

Why did I stick with the G19 when I liked the M&P guns so much? Two reasons. First, I was already heavily invested in the Glock platform with dozens of spare magazines and holsters. Secondly, Smith & Wesson did not make a pistol in the M&P line that matched the size of the G19. 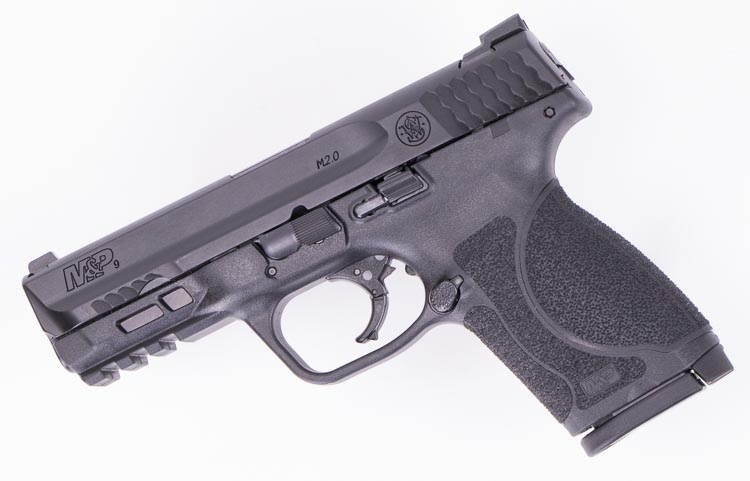 The G19 is, to me, a nearly perfect balance of size in a fighting handgun. It is large enough to be considered a duty pistol and carried by any cop or soldier. However, it is still compact enough that it can be carried in a concealed manner in many situations. Other than my J-frame Smith & Wesson in a pocket holster, my second-generation Glock 19 in a Milt Sparks Summer Special II has been with me more than any of my other guns.

Unless Smith & Wesson came out with a G19-sized M&P, I was going to stick with my Glock.

Well, it looks like Smith & Wesson is making a play for all of the G19 fans with its latest introduction: the M&P M2.0 Compact. This is an all new pistol for the company. It is smaller than the full-size M&P, but larger than the first generation compact M&P guns. In fact, it is right about the same size as the Glock 19. 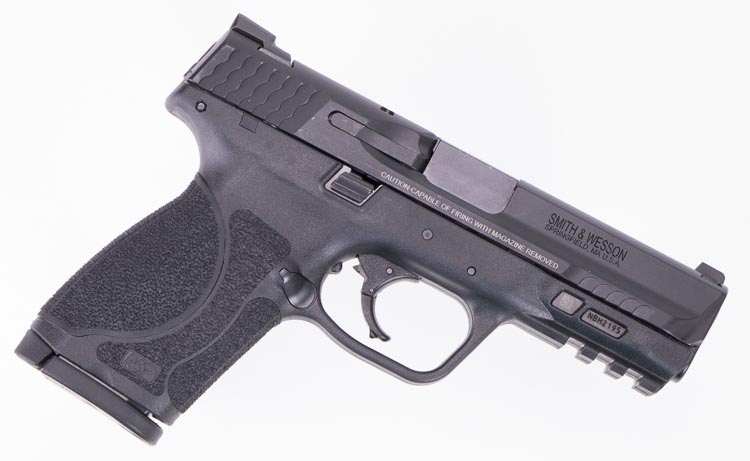 Looking at this gun, there is little doubt that the pistol is part of the M&P M2.0 series. It has the same general lines as its bigger brother, and Smith & Wesson gave it the same second generation treatment the full-size guns got. The M2.0 treatment includes a new texture on the grip, an expansion of the palmswell grip sizes, enhancement of the stainless steel internal chassis and an improved trigger.

The M&P M2.0 Compact comes in two different calibers and has models with and without thumb safeties. The following specifications are for the 9mm version of the gun without a thumb safety. The thumb safety models carry the same suggested retail price. Models in .40 S&W have two fewer rounds in each of the magazines and are 0.7 ounces lighter.

I spent a lot of time testing the full-size M&P9 M2.0 earlier this year and liked the gun a lot. You can read my review of the gun by clicking here. When Smith & Wesson sent me this compact a few months back, I was eager to try it out. Based on my prior experience with the full-size pistol, I had high expectations for this model. It did not disappoint.

My shooting background is from a practical perspective: law enforcement and self-defense. Though I encourage people to participate in the shooting sports, I am more concerned about a gun’s usefulness in a fighting role than a gaming one. I mention this so you have a context for my observations about this gun. 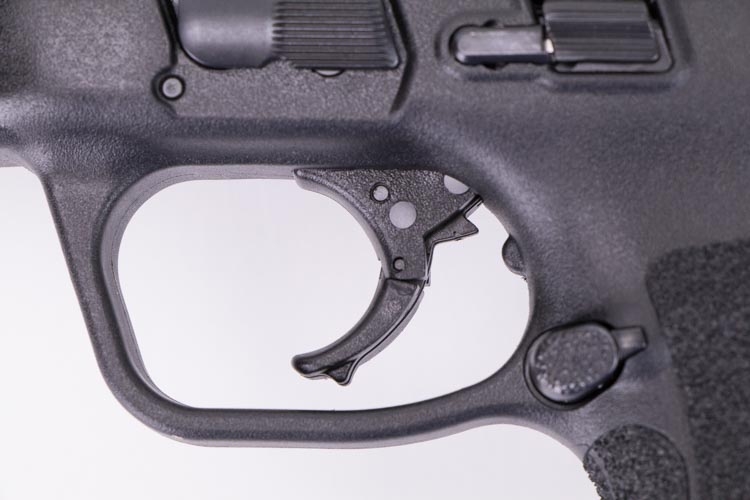 So far, I’ve put a little more than 700 rounds through this gun. About half of these rounds were from three different brands of FMJ ammo (115 and 124 grain). The balance of the rounds shot to date have been self-defense loads ranging in weight from 50 grains through 147 grains. Measured velocities range from the mid-900 fps to more than 2,000 fps.

Through all of these widely different ammunition loads, I experienced no malfunctions of any kind. More rounds will give me an indication of the gun’s long-term durability. However, it does seem reliable out of the box.

The gun is more accurate than I am. Even so, I was able to shoot sub-1” groups with five rounds at seven yards with no brace or rest. For a guy who’s hands aren’t as steady as they were 20 years ago, that’s accurate enough for me. I have no doubts that this gun in the hands of a pro-shooter could turn in half inch groups at this relatively close distance. 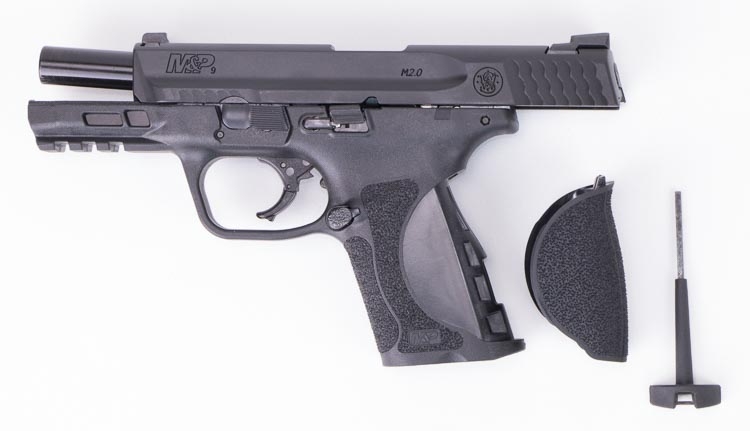 At 25 yards, my groups opened up a bit. Again, I put the fault on me. Even so, sub-4” groups keep all five rounds in the center mass with room to spare.

I really like the aggressive texture that Smith & Wesson chose for the M2.0 series of M&P pistols. It works very well to lock the gun into your hand when shooting. It can be slightly abrasive on someone if his or her hands are relatively soft and they do a lot of shooting at one time. However, it is not going to be painful or draw blood.

I’m still not a fan of the M&P triggers. The M2.0 series has a more pronounced break and reset than the original triggers. Even so, they aren’t as good as many of the other striker-fired triggers on the market. Frankly, the Walther PPS and HK VP9 have significantly better triggers than the Smith & Wesson guns. I also prefer the Glock triggers, but the difference between the Glock and M&P is smaller.

Am I ready to trade my Glock 19 in for a new M&P M2.0 Compact? No. It’s not because I think the Smith & Wesson is inferior to the Glock. I believe the two guns are on par with one another. However, I simply have too much money invested in Glock 19 holsters and magazines to change platforms. 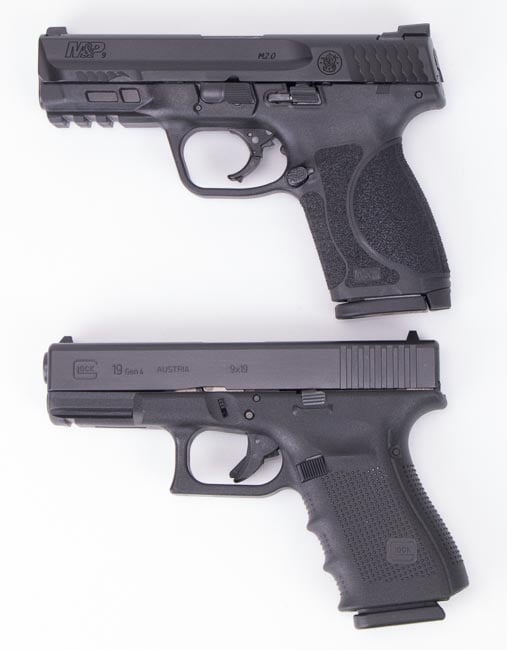 However, if I was new to the concealed carry or home defense market, my view might be a bit different. Both the Glock 19 and the M&P9 M2.0 Compact offer excellent performance at reasonable prices. Compared to the Gen4 Glock 19, I think the Smith & Wesson looks better and feels more suited to my hand.

The new Compact pistol is a solid fighting handgun. If it is better than your preferred self-defense pistol is a personal choice, but it is worth a look.