It isn’t just the wrinkles in your face, the watch on your wrist, or the clothes you wear that mark your age.  Sometimes, it’s the old school guns you carry…EDC guns like the ones you might feature on Throwback Thursday.

You can learn from us old Yodas, younglings. (Yes, I speak Star Wars, Millennium Boy! In case you didn’t backtrack it, my generation watched the first one in theaters when it came out. It’s one reason we can appreciate “a more elegant weapon from a more civilized age.”)

Now, I’ll confess that I’m carrying a Glock 19 as I write this, but none of us can deny that older designs still work as they always did…we just have to understand why some people still carry them, and yes, that includes some of the Younglings, who made the choice to carry old school guns through critical thinking and not just the momentum of old-fart-itude.

What? Only six shots? Maybe even only five?

Yes, but the DA revolver has benefits, too.

For those new to the gun — the people Jeff Cooper’s disciple Mark Moritz famously dubbed NDPs, or Non-Dedicated Personnel — the DA wheel gun makes a lot of good sense. No slide to struggle with. No worries about “having a round in the chamber,” and if you don’t think that’s A Thing, you haven’t been on the gun-related Internet much lately.  Super-easy to open and close the cylinder, to press a rod and eject the cartridges…in short, to see if it’s loaded or not.  These old school guns are easy to clean. Not dependent on cartridge shape or power level to function. Get one in double-action-only format and you’ll never have to worry about lowering the hammer from a cocked position under stress (yes, that can get scary), or being accused of an indefensible negligent discharge due to hair trigger (yes, I’ve seen that too).

Sure, that long and relatively heavy trigger stroke takes some practice to learn to shoot. Nothing comes without a price.  But the rolling trigger press of a double action, once mastered, will teach you to distribute your trigger pressure and make you a better shot with your short-pull autoloader, no matter what the speed.  And you’ll discover something else: except for the finest of target-grade semi-automatics, the revolver will be more accurate.  Take equal quality center-fire revolvers and autos from the same maker (Ruger, for example, or Smith & Wesson) and put ‘em in a machine rest or on a bench rest in skilled hands.  You’ll find the groups from the revolver will generally be smaller than those from the semiautomatic.

In the late 1920s, Walther came up with auto pistols which fired the first shot with a long, heavy double-action pull and cycled themselves to easy, short single-action pulls thereafter until they were empty or a press on the decocking lever returned them to double-action mode.

The 1950s and ‘60s saw this design reborn in this country courtesy of Smith & Wesson, and for a very long time, they were the paradigm of “police duty” semiautomatic pistols.  Today, a new generation of serious American pistoleros have rediscovered the utility of these old school guns. They appreciate the fact that after the first long pull, all subsequent shots have much sweeter trigger pulls than most current generation striker-fired pistols.  National and world championships won by such masterful shooters as Ben Stoeger (Beretta 92) and Ernest Langdon (Beretta 92 mostly, but also the equivalent Sigs) reinforce the lesson.

There is also that significant matter of safety, which is what sold TDA pistols to America’s cops and armed citizens in the first place. The long, heavy pull for the first shot (which is where most unintentional discharges occur) mitigates the problem even if it’s not always enough to cure it.  Moreover, most double-action-only autos have exposed hammers, which allow the shooter’s thumb to “ride the hammer” as the pistol is holstered. This can prevent the hammer from rising and falling if anything from a too-narrow holster safety strap to the adjustment cord on a jacket to the shooter’s own finger from interdicting the trigger and firing a shot when the pistol is going into the scabbard.  The current popularity of appendix carry for concealment, which points the gun muzzle at one’s private parts and femoral arteries has helped promote the resurgence of hammer-fired guns such as the typical TDA auto.

You read it correctly: it’s not a patent number, like “17” on a Glock – it’s the year of introduction.  Why do so many people still carry the 1911 pistol? Because John Browning, who designed it, was a freaking genius, that’s why!

I can’t think of a slimmer pistol at this caliber/power level. That’s important when you carry inside the waistband all day, every day for maximum concealment.  I started carrying a Colt 1911 .45 that way behind my right hip when I was twelve years old working part-time in my gunfight-survivor father’s jewelry store, and to this day, when I holster a 1911 my body seems to purr “Ahhh…yes.”

The 1911’s mandatory cocked-and-locked carry gives you a safety net if the bad guy gets the gun away from you: case after case has shown the on-safe pistol to be a life-saver in that situation.  Tests show that people unfamiliar with the 1911 take about 17 or 18 seconds to figure out which widget to press to “turn on the gun,” creating a substantial margin of life-saving opportunity to rectify the situation.

Reliability? The 1911 .45 was historically the most reliable semiautomatic service pistol under battlefield conditions in its time, and today’s are the most reliable ever, since the good ones are engineered to feed hollow points.  The 9mm version of the 1911, considered unthinkable until 1950 and finally engineered to be reliable in the format at this point in the 21st Century, offers a pleasingly light “kick” to the recoil-sensitive.

It is a uniform trigger pull first shot to last that sells so many people on modern striker-fired pistols. The 1911 has had that since, well, 1911, and by the nature of its design gives a cleaner and crisper trigger pull.  With a single-stack magazine and a design that allows long trigger or short, the 1911 lends itself to adaptation to very short fingers or very long ones.

Old School Guns? Coping With The Cognitive Dissonance of It All

We old people with old school guns (and particularly, those of us who also use the “newfangled” guns) sometimes find ourselves wondering if we need a psychiatrist’s couch.

1973: I am carrying a cocked and locked Colt 1911 .45 as a uniform police duty pistol. I get called a “radical” and a “maverick” for not carrying an ordinary service revolver.

1990: I am giving a guest lecture for the Washington State Law Enforcement Firearms Instructors Association, and take my coat off when I get to the podium. A young cop in the front row points at the stainless Colt Government Model .45 auto in my holster and says in a loud stage whisper, “Look! An old 1911! Hasn’t this dinosaur ever heard of Glocks?”

2006: I am a sponsored shooter for Team EOTAC, where the sponsor wants us to win as many gun divisions as we can at major IDPA matches. We have world champ Robert Vogel, ace 1911 shooter Mark Redl, national Stock Service Pistol champ Tom Yost, and Super Dave Harrington on the team to shoot in the auto pistol divisions. Some old fart who remembers double-action six-shooters is needed for the revolver events, and by default, I become the Designated Dinosaur.

At my range in Florida where the local sheriff’s department SWAT team trains, I show up with a Ruger GP100 .357 Magnum on my hip, and one BOSS (Buffed-Out SWAT Stud) points at my Ruger and asks loudly, “Where’s the powder horn?”  I

In about the same time frame, I’m teaching at a range up north where a police chief I know comes out, with his little boy in tow, to say “Hi.”  The little dude looks at my holster, points to the same GP100, and shouts to his dad, “Look! An old Cowboy Gun!”

Sigh.  I’ve gotten used to it.

Getting used to it is good, and I’ll tell you why. I try to change guns every training tour, because my students all come in with different firearms, and they deserve an instructor who knows how to run more than one type of handgun.

For the month of August, 2017, realizing I hadn’t taught with a double-action revolver in a while, I made my teaching gun the Smith & Wesson Model 19 revolver, which I carried with 125 grain .357 Magnum semi-jacketed hollow points. It was the gun its progenitor, my mentor Bill Jordan, called “The answer to a peace officer’s dream” when it came out in the mid-1950s. The load was the one that when Indianapolis Police adopted it in the 1970s delivered ten one-shot stops in the first ten shootings with it, three with arm and leg hits. I carried it in a period-correct Bianchi #3 Pistol Pocket, an all-leather inside the waistband holster that I convinced Bianchi designer Richard “Red” Nichols to make with a thumb-break safety strap after I completed my beta-testing of a prototype in the late 1970s.

My significant other, a state champion shooter and a Princess of Polymer Pistols, was with me on that August 2017 training tour.  One night at our hotel she glanced down at my old .357 Combat Magnum in its old Bianchi holster and said, in her sweet and lovable way, “Honey, the 1970s called. They want their gun and their holster back.”

“Because they still work.” 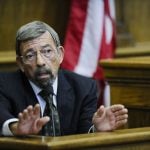