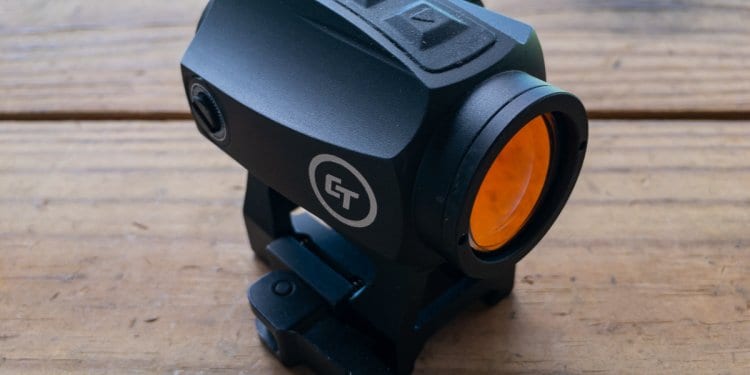 The laser recently made a big splash in the more traditional optics world. Over the past year they have not so quietly produced a family of red dot sights and a related family of traditional rifle scopes. I guess if you started out in the “aiming” business it makes sense to expand into related areas.

Many tactical and defensive firearms end up with a primary and backup aiming system of one sort or another. Whether it’s an optic combined with backup irons or a pistol geared up with traditional sights or an optic and a laser, it seems to make sense to get more of those parts from the same vendor – assuming that the gear is competitive and solid. 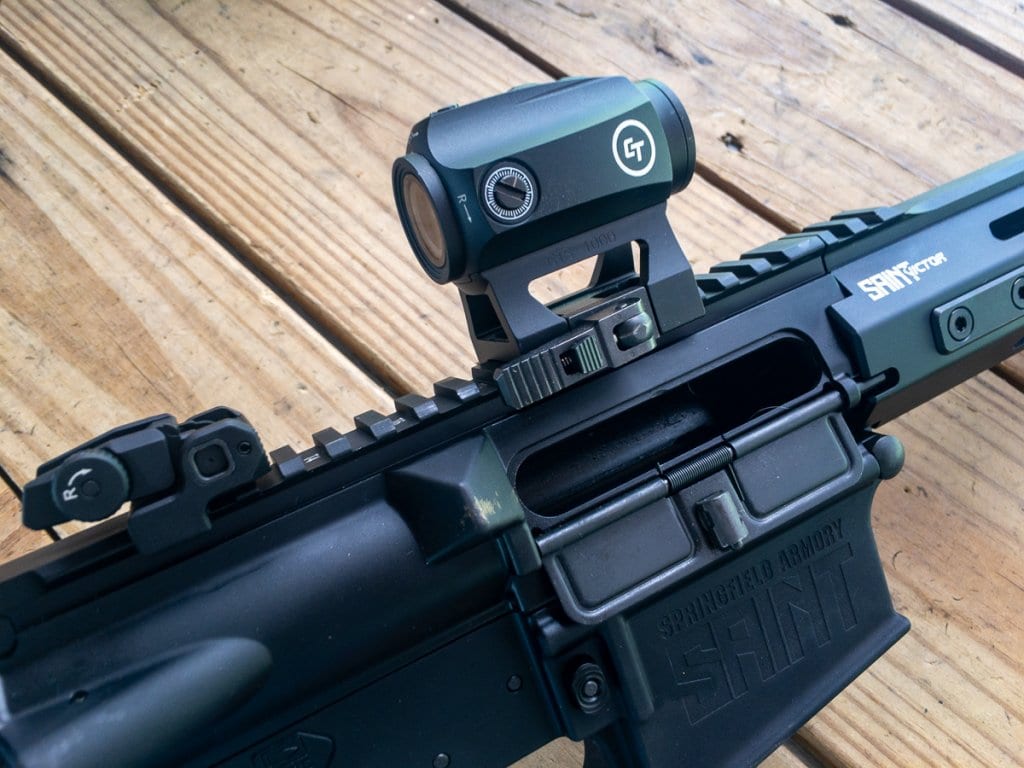 I’ve been testing the new CTS-1000 on a new Springfield Armory SAINT Victor .308 AR-10 rifle. It’s amazing how well you can hit up to a few hundred yards with the 2 MOA red dot. Note the quick release rail mount. It’s good.

I’ve been testing some new red dots from Crimson Trace, the CTS-1300 and CTS-1000. Both are zero magnification red dot sights. The CTS-1300 model is small and compact and intended for rifle and shotgun use. It’s just a hair big for pistol use.

The CTS-1000 is the big brother that’s more suitable (I think) for defensive and tactical use. That’s not only because of its more substantial size and construction, but because of the way it operates. The CTS-1300 is either on or off and manually controlled with left side up and down intensity buttons. After three hours of inactivity, the unit goes to sleep, and the dot disappears until you wake it up with a tap of either intensity button. That rules it out for defensive applications, at least for me, but it will make a solid competition or range toy optic.

I suspect that the company is fighting some technology patent hurdles, but it does strike me as strange that the folks whose core value proposition has been “instinctive activation” aren’t following a similar path with the optics. In this day and age, there are too many red dot options on the market that offer an “always on and ready” mode of operation. That’s my take but your mileage may vary. 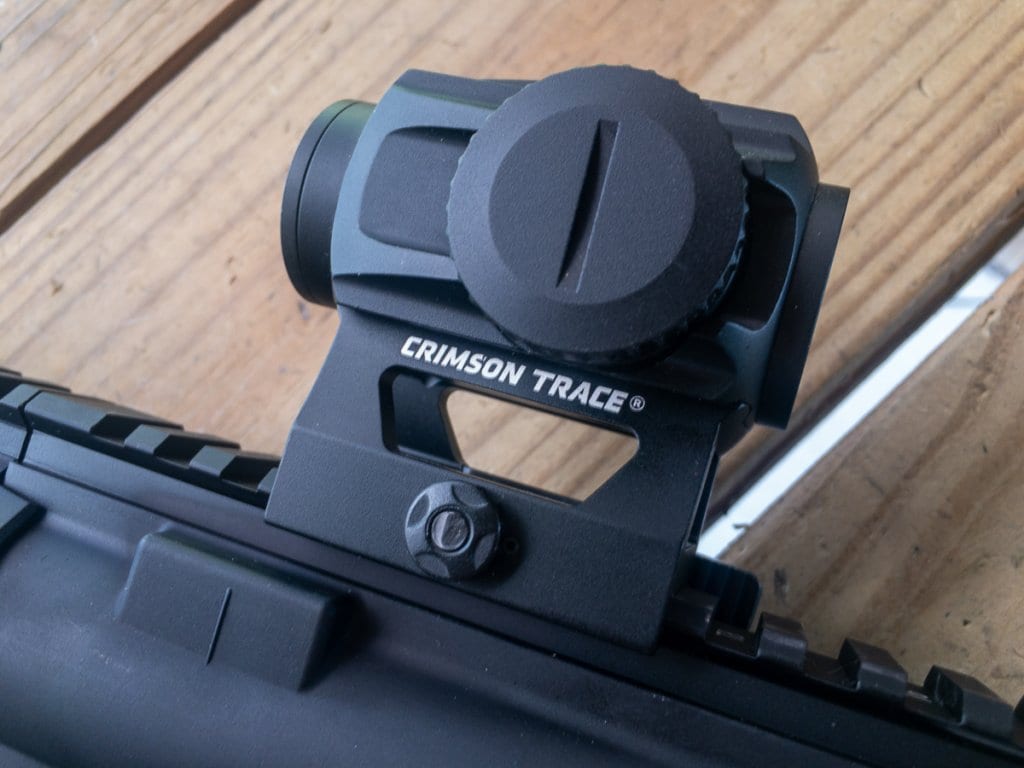 The CTS-1000 runs on a single CR-2032 battery. You can leave it powered on and after a while it drops to a lower intensity to save battery life.

The CTS-1000 can always be on if you like. Its 10 intensity levels for the 2 MOA dot range from a night vision friendly level at the low end to super bright for sunny days at the top end. If you leave this optic on at a level between 8 and 10, it will drop back to level 7 after 4.5 hours of inactivity to save battery. How long it lasts at level 7 is yet to be determined. The one shown here has been on for a week or so and I’m leaving it be so I can gauge its long-term battery life. 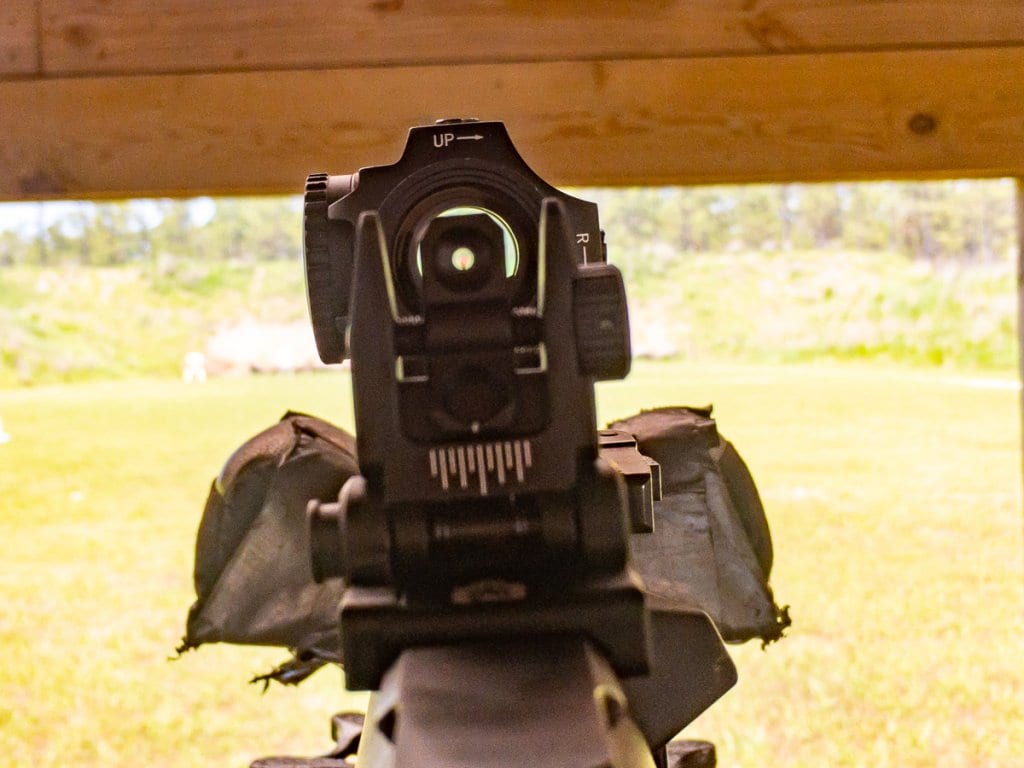 Out of the box, the CTS-1000 co-witnessed perfectly with the flip-up iron sights on the SAINT Victor.

As you’d expect from Crimson Trace, the unit itself is rock-solid. It’s all metal body has a battery compartment on the left for the single CR-2032 battery and intensity level push buttons on the top. The windage and elevation adjustments are exposed but low profile. The “Up” and “Right” turning directions are engraved on the back of the unit so you can make adjustments while looking through the optic. The mount is a good quick detach model. The throw lever has a spring-loaded lock to protect against inadvertent detachment.

I’ve been using this with the new Springfield Armory SAINT Victor .308 AR-10 rifle. As the Victor is a lightweight AR-10 variant, I’m equipping it for defensive and general shorter-range use, hence the red dot trials. I’ll be moving this red dot to a new Ruger PC Carbine in 9mm. I suspect it will be a great fit for that as well.