Pistol Caliber Carbines, or PCCs, have become one of the largest growing subsets of firearms. With so many out there I want to sit down and outline of my Top 5 Pistol caliber carbines. I’m a big fan of the concept and owner of many PCCs, and will likely own several more shortly. I’m including some guns that are legally considered pistols, but in reality are SMG-lites. So here are my Top 5 Pistol Caliber Carbines.

Of course, the CZ Scorpion made the list This gun was one of the guns that catapulted PCC popularity. This 9mm blowback gun comes as both an SMG lite style pistol and a full-sized carbine. I reviewed the carbine here recently, and I’m a big fan. 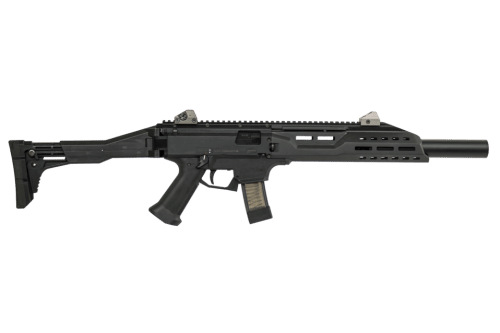 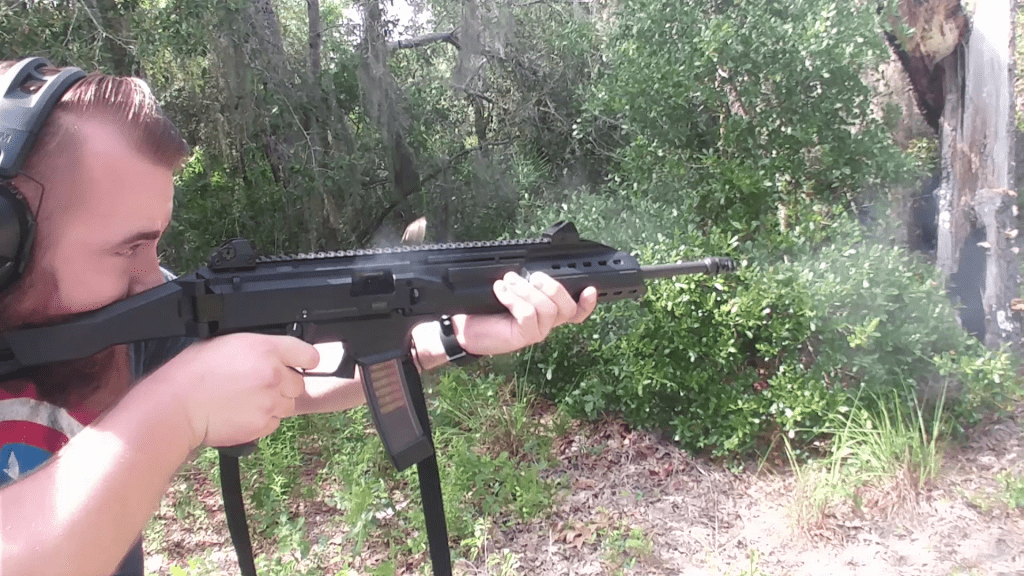 The gun is a blast at the range and looks like it stepped out of the future. It’s easy shooting, and the modding community is significant. The aftermarket has grown significantly, and CZ has been great about listening to customer feedback and designing new and exciting models of the Scorpion.

The Kel Tec Sub 2000 is a very simple gun. It’s a few tubes that happen to fold in half. That’s right this gun folds in half and gives users a very compact and easy to carry package. Kel-Tec designed a very reasonably priced but relatively innovative gun. 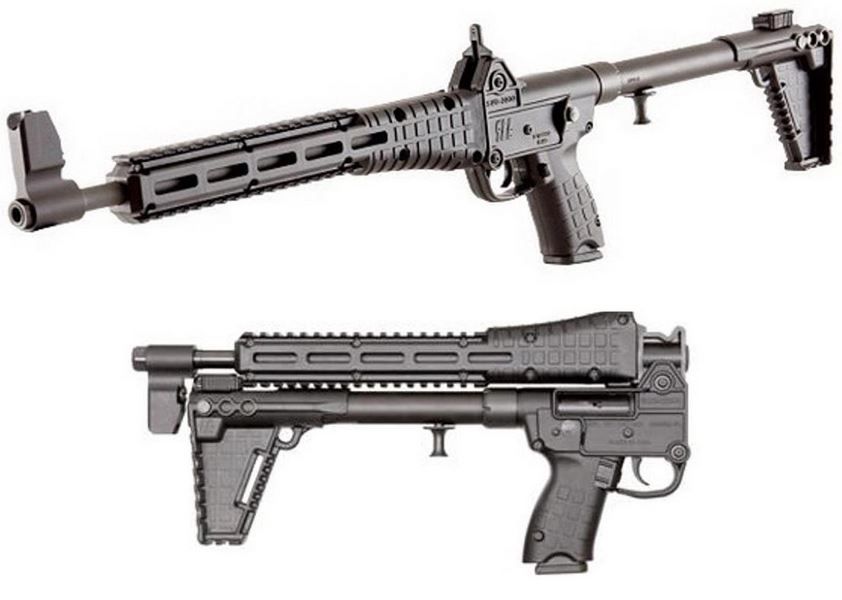 It’s predictably a blowback operated gun, which isn’t innovative, but it is useful. The gun has a wide variety of options for magazines, including Glock magazines, Beretta Magazines, CZ 75 magazines, S&W M&P magazines, and some I’m surely forgetting.

A remarkable feature is the ability to swap mag catches out with the Gen 2 model. This lets you change the magazines you use with the gun very easily. The Gen 1 is a simple rifle, but the Gen 2 made several improvements to the design and incorporated both Picatinny rails and M-LOK slots.

While it’s not the most refined gun, in my experience its been quite reliable, easy to handle, and fun. When it comes to pistol caliber carbines, I don’t think there is a better option for a trunk gun than the Kel Tec Sub 2K.

The most popular weapons platform in the United States is the AR 15, so it’s a natural extension to chamber them in pistol caliber rounds. The most popular is, of course, the 9mm round. Often known as AR9s these guns are usually blowback operated and often either use Glock or Colt magazines.

The most significant benefit would be parts commonality and the ability to radically upgrade every little thing. It’s straightforward to build an AR9 as well. You don’t need a special lower either when you consider conversion blocks from companies like Torkmag and Promag. These convert a standard AR 15 magwell into a Glock or Colt SMG magwell.

You can even start with something like an 80 percent lower and turn into an AR9. The AR9 is an excellent beginning platform for both a rifle or pistol build and one of the most affordable options for a modern PCC. AR-based pistol caliber carbines have certainly earned their place on this list.

The SIG MPX is likely the most modern and most robust PCC out there. It’s a gas operated design that is best described as modern. It utilizes some standard AR controls like the charging handle, the magazine release, and safety. It lacks a buffer, so side folding and PDW stocks are quite common. 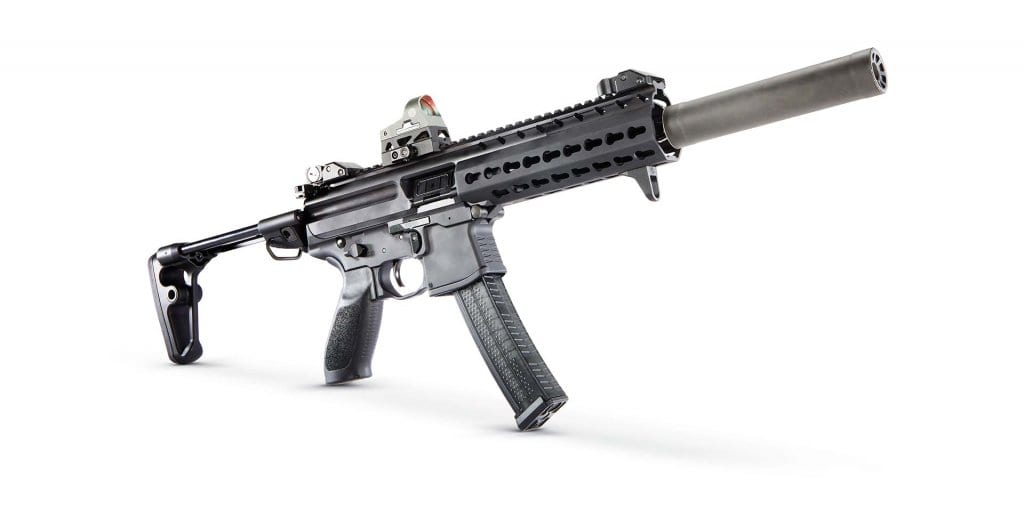 The gun is also extremely modular with easy switch uppers and quick change stock options. It’s not as modular as an AR, but very well could be. Both rifle and pistol versions of this gun exist, and they are popular SBR hosts. The modern design includes KeyMod rails, easy suppressor compatibility, and the ability to use barrels that go from 4 to 16 inches.

The MPX also uses a fantastic magazine that quite reliable, although they are a tad expensive. The SIG MPX and the CZ Scorpion are two big reasons we have so many PCCs today. As far as pistol caliber carbines go this would likely be my go-to choice for home defense.

Why is the Ruger PCC number one on this list? It’s not the fanciest, the sexiest, or even the most technologically advanced. The Ruger PCC happens to be a well made, brilliantly designed, and affordable gun made from the roundup as a PCC.

The first thing I like about the Ruger PCC was the fact it comes with an interchangeable magwell and comes with two different magwells. The first take magazines from the Ruger SR and Security guns, and the second takes Glock magazines. Glock magazine compatibility means cheap and common magazines in a wide variety of sizes, from 10 rounds to 50 round drums. I hate proprietary magazines on my pistol caliber carbines it’s nice to see Ruger be humble with Glock adaptability.

Additionally, this could mean additional magwells for different magazines in the future. Currently, the only other model is for the Ruger American pistol. An aftermarket could inevitably create new magwells for this gun. In fact, the aftermarket can make a wide variety of upgrades from integrally suppressed barrels to new stocks.

The PCC is also a takedown gun that allows secure storage and transport. It comes with a little Picatinny rail space for optics, flashlights, etc. The weapon is an amped up variant of the Ruger 10/22 Takedown, a rifle renowned for its ease of use and reliability.

Plus, it’s retailing for under 500 bucks and has received heaps of praise.

The industry could not ignore the rise of pistol caliber carbines. We see more and more every year, and the Army is even lighting up a submachine gun competition that features the SMG variants of some of the guns on this list. With SBRs, suppressors, and more becoming increasingly popular the time seems ripe for PCCs to keep growing.