Pistol Caliber Carbines (PCC) and Personal Defense Weapons (PDW) have been gaining steam in the last 10 years, but the concept is hardly new. My favorite old Ruger is a carbine in .44 Magnum. It looks like a 10/22 that’s all grown up. But it isn’t the easiest gun to feed, and that’s what we’re talking about today—the functionality of the Glock magazine.

Glock mags are, most typically, associated with Glock pistols. There are other pistols, like the Mossberg MC1, that run off Glock mags, too—but we’re here to talk about PCCs and PDWs. Glock mags are so well respected that many of these types of guns are now being built, from the ground up, to take advantage of Glock’s success.

PCCs are rifles. They’re carbines that are chambered in calibers most typically associated with pistols. For the purposes of this discussion, we’re not talking about the 7.62×39 or 5.56 or any of the smaller rifle rounds that have been growing in popularity for pistols.

PDWs are a bit more nebulous.

No one seems to agree on what a PDW is. Is it a small gun that fires a small, high-powered round? Some use the term PDW for a gun that would typically be built in a rifle form but is built as a pistol instead (because you can’t call it a carbine if it is legally a pistol). The term PDW is thrown around loosely and can include actual SBRs, compact pistols that fire rifle calibers, and even conversion kits that add functionality to a pistol by housing it in a chassis or replacing its upper.

Right now, some of the best-known guns in these categories have proprietary magazines. It is in the best interest of the brand, usually, to sell you something that keeps you coming back to them. To that end, some guns run on their own mags. The CZ’s Scorpion. The small SIGs.

Is a devoted magazine a mistake?

Ask Ruger. They’ll say no, and stick to their guns, so to speak, but think how many Mini-14s and Mini-30s they would sell if those gun ran off AR or AK mags. Ruger knows, too, and went in a different direction with more recent launches (more on that to come).

Who makes that absolute best magazine in terms of dependability and functionality? Maybe that’s Glock, maybe it’s not. But Glock mags do work, even when they’ve been abused.

Perhaps we should consider it from another angle. What if we simply wanted to make a gun that used one of the most widely available pistol mags? Glock’s 9mms still win.

Here are some really compelling reasons:

It doesn’t have to be Glock mags, honestly. The crux of this biscuit is simply having a rifle that runs on the same caliber, and with the same magazines as your handgun.

Let’s take a step back to the end of the 19th century. If you think ammo is hard to find now… Supply lines in the territories, especially, were thin. For many, a muzzleloader was a practical choice, as all you needed was the raw materials of ammo. Cartridges, though, changed that. If you had a rifle and a pistol that fired the same cartridge, you would only have to source one kind of ammo.

Those original pistol caliber carbines, old Henry’s and Winchesters, were a bit underpowered when compared to the big-bore rifles and rolling blocks, but they worked. A Colt 1873 and a Winchester 1873 chambered for the same round was a solid pairing.

The Top 5 PCCs and PDWs that take Glock mags

PCC fans know PSA. They make great rifles and pistols. Like many other AR makers, they modified the platform to include 9mm ARs that run on Glock mags. These are available in both rifle and pistol configurations.

ARs in pistol calibers provide a really solid option for anyone who regularly trains with an AR-15. The manual of arms is very similar. The muscle-memory transfers easily. Mag changes feel odd at first, but the transition is easy enough.

And the 9mm rocks from the longer barrel. Almost all 9mm is formulated to fire from a 5″ barrel. That’s where the muzzle-velocity numbers seen on the box usually represents. So having more barrel to contain the burning powder typically results in faster speeds.

If you want a high-end, AR-based Glock mag-fed 9mm Parabellum, the Wilson Combat AR9 may fit the bill. They’re not as common. I have yet to shoot one, but I’ve shot my fair share of Wilson Combat guns. They work. From their 1911s to their Beretta mods to their rifles and shotguns, Wilson Combat has a stellar reputation.

Kel-Tec has never achieved the polish that defines Wilson, but they’ve invented some gun that any of the companies in this list would be proud to call their own. And the Sub2000 is a prime example.

The Sub2K folds up. While it isn’t the easiest to charge, it is compact. The design is also ridiculously rugged. This is, in my opinion, the perfect truck gun. With a 33-round Glock mag, this becomes a formidable tool.

My only complaint about the Sub2K is that the top rail needs to be empty in order for it to fold effectively. This gun is screaming for a red dot, but it isn’t always practical. You can put a laser on the bottom section of rail, like the Viridian X5L. That makes an effective hand stop and can add a light and a laser. 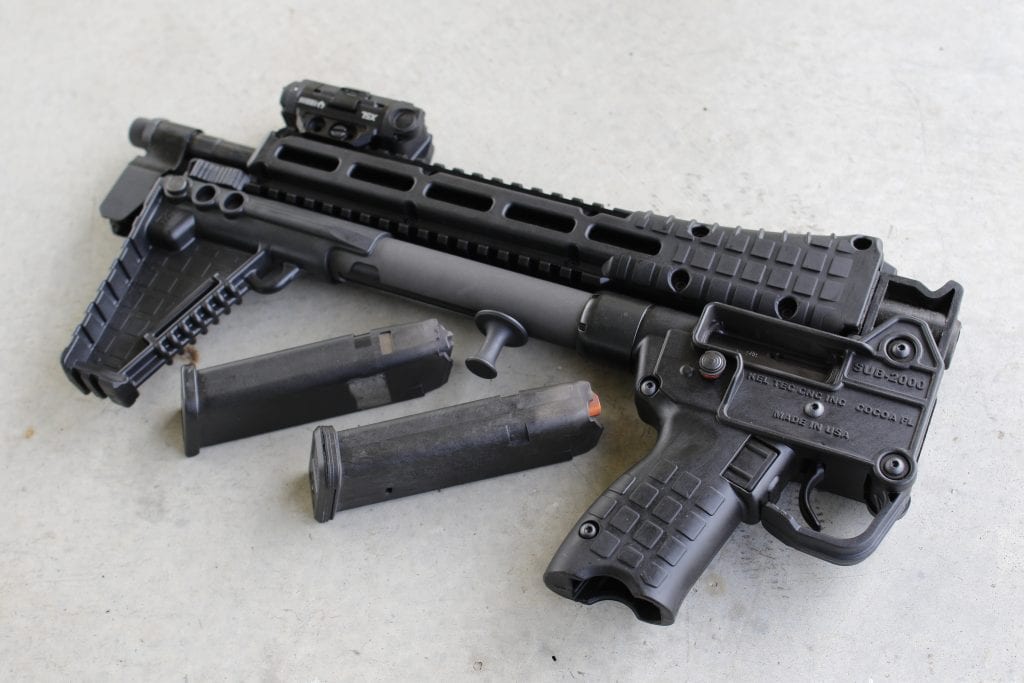 The Ruger PC Carbine is another exceptionally popular option. The gun builds in all of the adaptability that the older Ruger Minis ignored.

The Ruger builds in the functionality that makes PCCs so adaptable. They’re capable rifles in their own right. They have proven to be reliable. They continue to be affordable (when you can find one in stock). They’re easy to service and keep running… the list goes on.

Like many of these guns, the Ruger PCC has ample rail space for the addition of accessories. And the magazine wells on this gun are interchangeable, so you get even more adaptability. But really–GLOCK mags.

There are many versions, but MSRPs start at $649

The Banshee, too, comes in a variety of configurations. Each is roughly the same concept—a compact evolution of the AR platform. Several of them take 9mm Glock mags.

The Banshee has been a very popular platform in all of its calibers. CMMG has refined the actions to make each functionally reliable. That’s to be expected for guns in this price range.

Yes. Yes, there are other options. Why not turn your existing Glock into something else?

The Mech Tech Systems Classic is a pistol-to-carbine conversion. The set-up allows you to take your existing gun (many models, but we’re focused on Glocks here) and add a longer barrel and more functional working surfaces.

The Mech Tech options are not firearms in their own right, so they can be shipped directly to consumers.

The CAA Roni and Micro Roni

Similar in execution is the CAA Roni. This is one of the more familiar and best-selling versions of this concept. Again, the Roni is a shell that you put over your existing pistol. The Glock versions have been making waves for years now.

The Micro Ronis are really quite compact, but add a tremendous amount of rail space. While you may not end up with the longer barrel of some of the earlier models, you do get the functionality.

What’s next for Glock mag PCCs?

What’s next? If it were up to me, I’d make a Glock rifle. A rifle, made by Glock. That would blow sales for all of these guns, combined, out of the proverbial water. Where is it Glock? We’ve been waiting for years.