I love the classic vertical grip. I trace this back to the old school Thompson, the gun featuring the classic 50-round drum and gangster forward grip. Something about the aesthetic appeals to me. As a person, I have a weird, interconnected relationship with vertical grips. In 2022 they aren’t quite en vogue anymore, so I wanted to do a deep into the vertical foregrip and maybe talk to a few new gun owners about the old vertical grip and its relevancy. 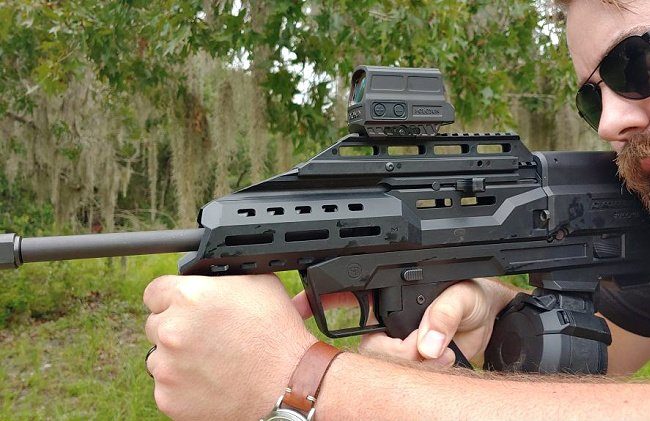 My Connection to Vertical Grips

Growing up as a kid, I always liked the aesthetic of a vertical grip on a gun. I loved the Tommy gun and later fell in love with the MP5K and the AUG. The grip often set them apart and made something unique in my eyes.

Imagine my joy when I got to the Infantry Training Battalion and received my new M16A4 in 2008. I had used the old A2 at boot camp and was surprised by the optic, rail, and PEQ 15 enhanced weapon. As part of my SL3 for the rifle, I received a Knight’s vertical grip and promptly attached it.

In fact, we were told that’s the way we shoot now. Put the vertical grip either near the magwell or midway down the rail. That’s how we gripped our rifles in SOI and when I got dumped into the fleet, Knight’s grips and those terrible bipod grips were everywhere. I got issued a SAW, and with it came a vert grip.

Later on, after these grips left the world of modern rifle discourse, I still liked a vertical grip. Not because of the look or any significant benefit, but because my shoulders are messed up. According to my Doctor, I have the shoulders of an 80-year-old man. My vert grip allowed me to handle long guns without pain.

As you can see, me and the vert grip go a long way back and are still good friends.

The Early Origins of Vertical Grips

If you don’t know what I’m talking about, a vertical grip is a device that hangs below the barrel, often attached to the handguard of the gun. It might hang straight down, or it might have a slight angle to it. These grips have been around for a fair bit.

The terrible machine rifle known as the Chauchat featured a grip behind the magazine. The Thompson famously had the gangster grip, and several machine rifles and submachine guns embraced the design throughout the world.

The SOPMOD block 1 rifle featured the Knights foregrip. The little M4 only had so much rail space, and things lights and laser emitters were huge! When mounted to the short rail section, they made it tough to accomplish a traditional grip, so a vertical foregrip gave the user enough room to grip and rip.

They became popular enough that they were filtered to the general infantry, and before you know it, boot grunts like me thought we were high speed with M16A4s and vertical grips.

What’s the point of the vertical grip?

As mentioned above, they are handy when your weapon is quite small, especially if it’s got crap bolted all over it. Modern guns like the MP7 don’t offer a lot of hand space, so a little foregrip makes it easy to shoot and handle.

On your typical rifle set up, they do provide a better hold for retention purposes. It’s a lot easier to fight off a rifle grab when you have a vertical foregrip. The same goes for bayonetting a threat and generally using your rifle as a melee weapon. Those are fairly niche uses, though.

You can use a vertical grip as a barricade rest to provide extra support when behind cover, but smaller, dedicated products can do the same. One advantage of vertical grips is the ability to avoid a hot rail. It protects your hand after long strings of fire. My SAW had a grip for this very reason. When I carried the M240 on patrol, I stuck a Knight’s grip on the side to avoid grabbing the hot handguard when we started moving.  I’m willing to bet that the Thompson had one because the handguard got hot under full-auto fire.

On shotguns, they can be great. If you use a push-pull method to reduce recoil, you’ll love a vertical grip. It allows you to push forward much easier and does a great job of mitigating recoil. On bullpup shotties, they can also help stop you from getting KSG hand.

They tended to cause shooters to muscle their weapons when attempting to control an AR. We pull our rifles into our shoulders to maintain control. A vertical grip allows you to pull back, but on an AR, it also tends to want to pull downward due to the inline stock design of the AR and similar weapons. This makes using the foregrip a bit awkward.

So we morphed the way we held vertical grips into some hybrid thing with half our hand on the rail and the back half pushing rearward on the vertical grip. We realized hell, we don’t need all that grip to do this, and stubby grips became a thing. Then someone at Magpul realized that the same ergonomics could be replicated with an angled foregrip, and that became the new hotness.

Most modern rifles in police and military service are either ARs or heavily inspired by the AR. If you ever switch to a weapon with a non-inline stock setup, the vertical foregrip is more intuitive. On an AK or Scorpion, it allows you to pull the gun back into your shoulder without muscling it too bad.

In a day and age of modern rifles, grips, and hand stops, the need for any kind of foregrip has slowly disappeared. Outside of shotguns and uber small SMG-type weapons, their purpose is very limited. They tend to be an individual ergonomic option and if you want your vertical grip, then get your vertical grip.

I’m a stubby grip guy myself, but I don’t hate you for wanting to party likes it’s 2007. The vert grip might not be uber popular anymore, but it’s still a perfectly useable tool.