The Flux Brace is sweet, right? It looks sweet, adds some real capability to your handgun, and you can even holster the dang thing. The downside is the $259 price tag and their popularity has made them near unobtanium. If you want a more affordable and more available option with similar uses, then the Recover Tactical 20/20 Stabilizer Brace Conversion Kit might be for you. It’s like a Ramen Noodle version of the Flux Brace. I think it’s slick, and the minimalist design is intelligent.

What the Hell Is It? 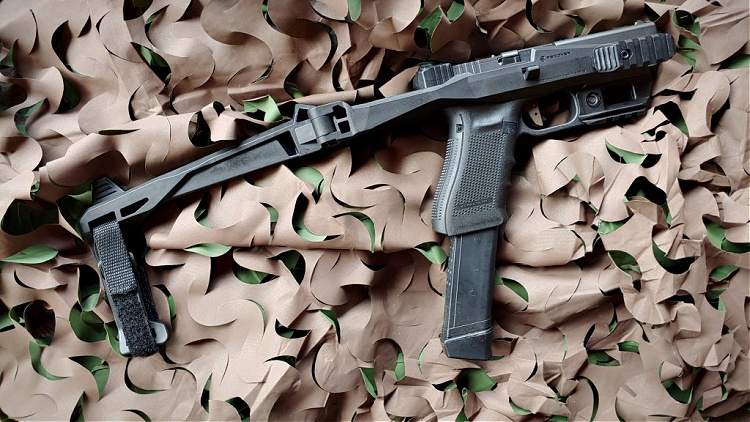 The brace also folds to the right side of the gun and locks in place on the brace system’s body. The body of the 20/20 features three positions for rails: left, right, and bottom. The bottom rail is fixed, but the side rails are optional and removable. To holster the gun and brace the left side rail has to go.

To rack the gun, you need to equip one of the charging handles, and you get two. The low charging handle is the only one that can work with a red dot. The high is more comfortable to rack with and allows for more control.

It ends up making your Glock look like some kinda sci-fi blaster. Less Star Wars and more anime sci-fi though, so weebs — eat your heart out.

Installation isn’t instant like a Roni and it does require a tool to remove and install the system. You have to loosen a nut with an Allen wrench and then open the brace to install or remove the Glock. It is a minor issue, but not a major one. Everyone loves tool-less installation, but it’s not always possible. To get a system this slim and sleek, you have to make a few compromises.

The Recover Tactical 20/20 has a multitude of options that include different packages at different price points. The base model costs only 99 bucks and includes only the brace: no rails and no holster. 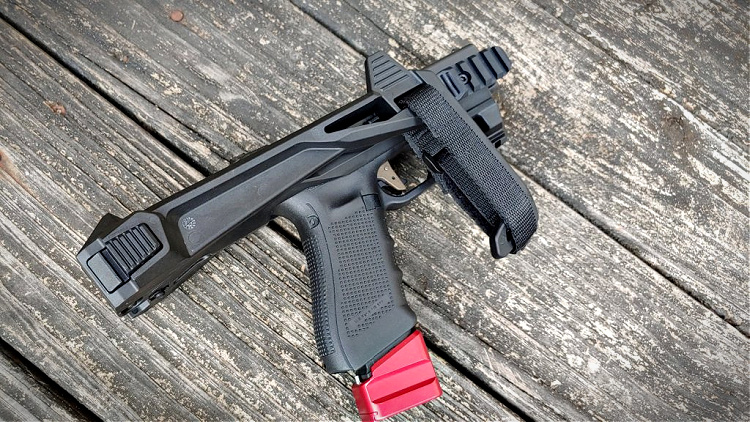 As you increase the options, the price goes with it. For the rails, holster, brace, and a one-point sling, you gotta spend about 164 bucks, but YRS Inc will give 10% off for new registered members. They were kind enough to provide the brace for this review, so give them some love.

The Recover Tactical Brace is short, sweet, and very lightweight. As far as Glock style braces go, it is the most compact system. Unlike other designs, there is no wrap-around shell that could potentially cause ejection issues.

The design allows for a good high grip on the gun. The controls are unchanged but are slightly clumsier than a stock Glock. The slide lock feels a little crowded and takes a very distinct touch to set off. I’d advise sticking with the slingshot method. 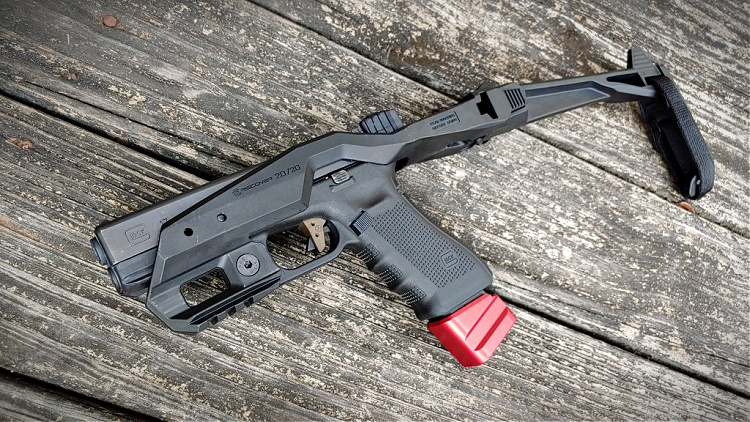 The velcro band is quite accomodating and allows you to tighten the brace down around your forearm regardless of size. It latches down, and the brace itself is comfortable and accommodating to your arm. Most braces make you fix your arm in a certain way, but the Recover Tactical 20/20 does an excellent job of allowing you to control and comfortably wear the weapon.

Range Time with the Recover Tactical 20/20

The Recover Tactical 20/20 is essentially a third arm that helps you hold your weapon. It locks to your forearm and acts as a lever against muzzle rise. The brace locks down on your arm, which gives you leverage over the weapon’s muzzle rise. It hardly moves off-target. It makes dropping 50 rounds from a KCI Glock drum as easy as a shameless plug to said drum.

The brace doesn’t keep you from running the gun with a good two-handed grip and doesn’t prevent you from shooting the gun like a standard Glock. The brace ends right at the elbow, and this allows you to move the gun into the box for reloads or weapon malfunctions. You can see the iron sights clearly and hold them steady. 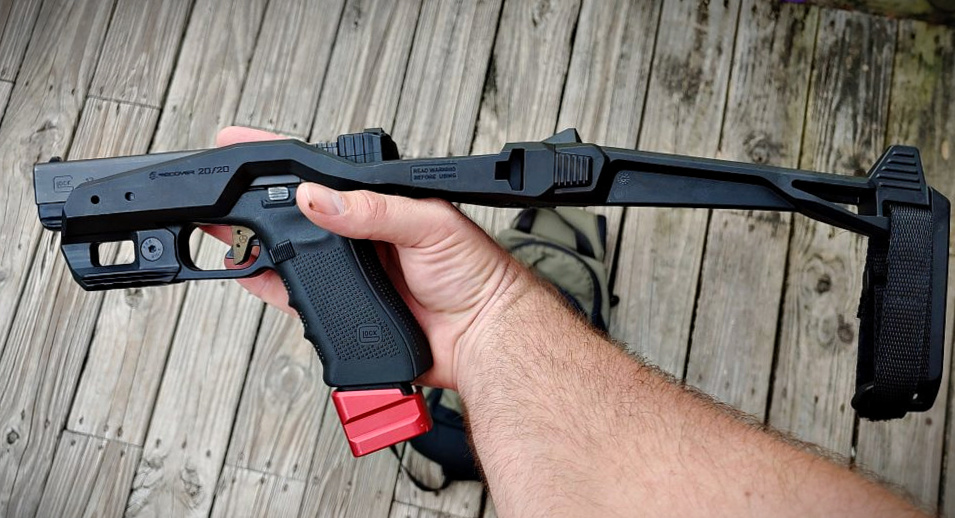 One-handed operations are much simpler with a brace. It’s much more stable and allows for controllable rapid fire. Braces were designed initially with the intent to help wounded veterans enjoy their firearms. Hell, I remember the original ARFCOM thread with the original brace abomination that became the SB 15. This model will most certainly accommodate shooters who have difficulty with one limb or another.

The Recover Tactical 20/20 is an item that’s easy to misuse, and if that happens, you could place it against your shoulder. In doing so, you might find it to be a bit short and provide menial cheek weld and a compromised sight picture. The sight picture would be a bit better with an optic rather than iron sights. The good news is that 9mm handguns have minimal recoil, and they don’t need a whole ton of support to be easy to shoot. 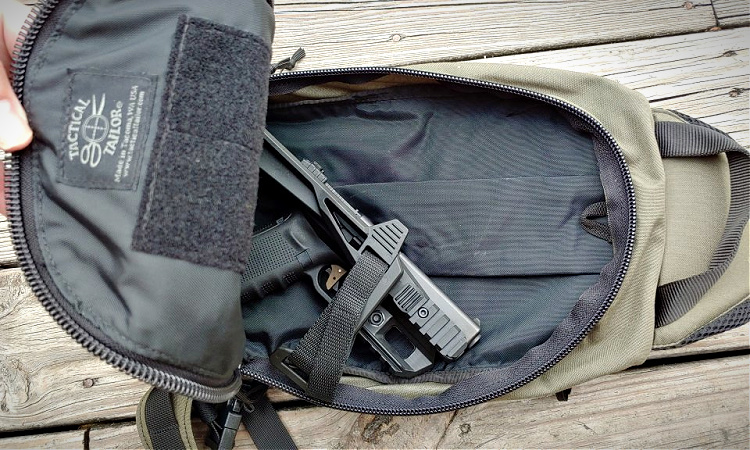 The Recover Tactical 20/20 is a neat little range tool. It’s comfortable, effective, affordable, and easy to find and purchase should you desire such a device for your Glock pistol. Let’s be honest; it also looks cool as hell, like something outta Borderlands or that terrible Total Recall remake from 2012. You know the one.

The holster is a simple system that attaches to the hanging dingus on the 20/20. This allows the system to lock into place, and the holster covers the entire trigger guard rendering it safe and effective. The holster uses a paddle to fit most shooters. It’s easy to holster the gun and Recover Tactical 20/20, and it’s simple to draw from. 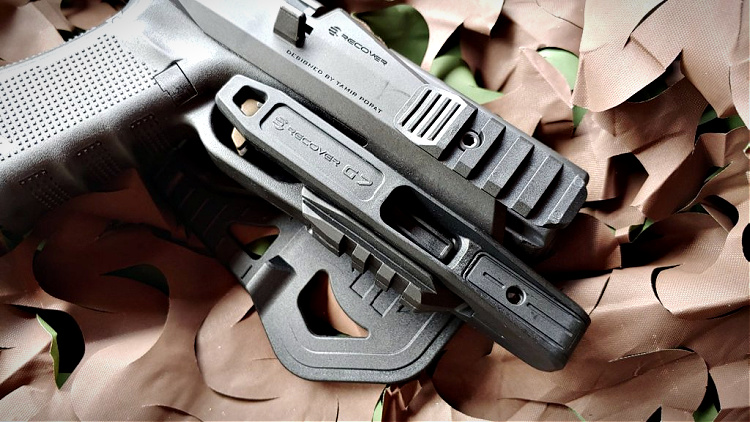 It’s not made for concealed carry, but it’s useful for what it is and what it does. The 20/20 holster is detachable and would allow for a MOLLE mount, and I think that makes it a bit better of an option for a battle belt or the like.

The Recover Tactical 20/20 is an awesome brace system that fully encapsulates your Glock. It increases your control over the gun. It’s also affordable and available, and those most certainly make it an appealing device. It’s not a Flux brace, but it’s an impressive design, and I love it enough to dedicate a Glock to it for near-permanent usage.