This is my Honor Guard. I’ve been a diehard GLOCK carrier for years. I regularly carry a 19. I carried a 42 (the .380) until the single stack 43 came out, and then I carried it. There is something comforting in the familiar manual of arms. A GLOCK is a GLOCK. 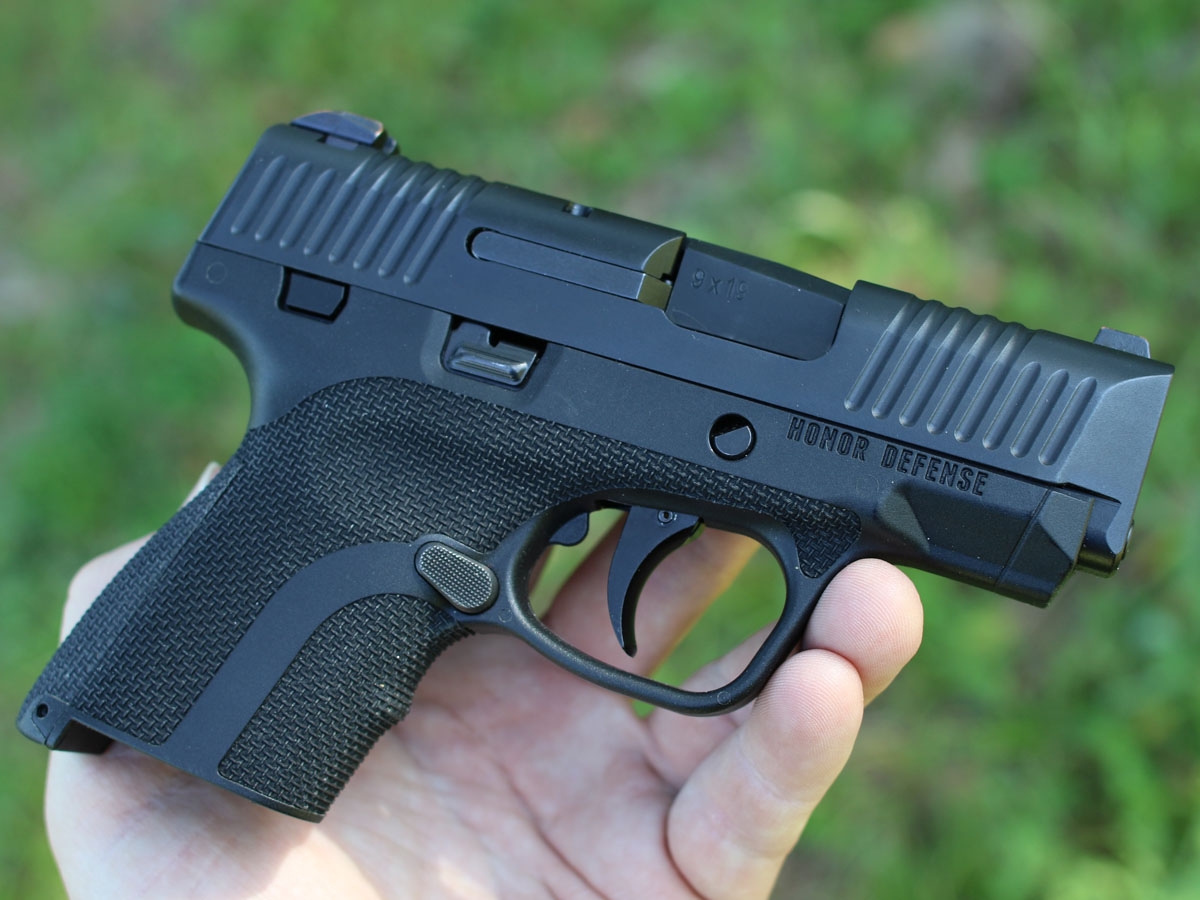 When it came time for me to find a new single-stack 9mm, I seriously considered a new 43. I also like the Smith & Wesson Shield. Both offered exactly what I wanted. I’ve spent serious time behind the trigger of the XD-S, and the Beretta Nano.

Then I happened on the Honor Guard at a trade show, and was impressed by the variety of frame options. The stand-off design seemed genuinely innovative. 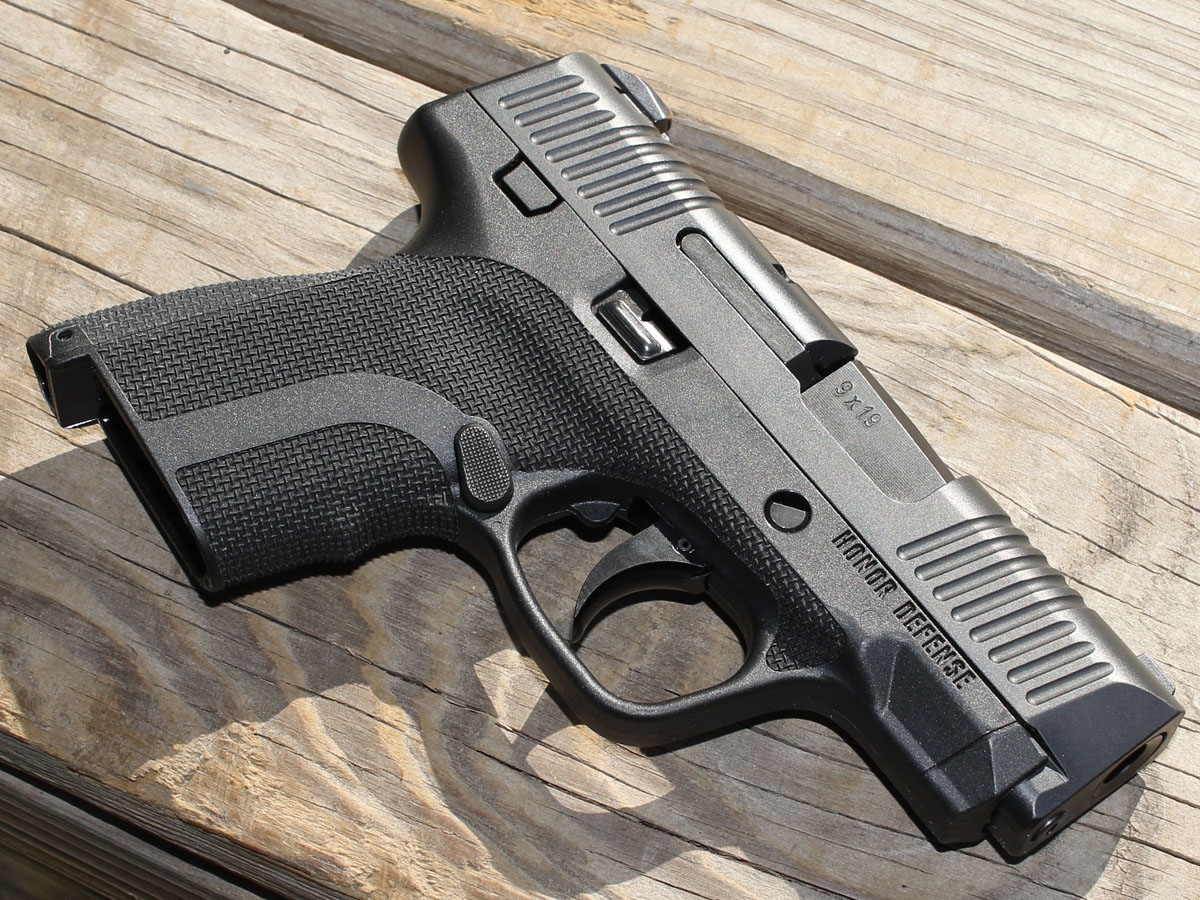 I had the company send me a preproduction test gun. The one they’d sent had more than 9,000 rounds through it before I got it, and it hummed along perfectly. I put that gun through hell, and many rounds, and it impressed me.

They wanted that gun back, though, and wouldn’t sell it to me. I kept it a couple of months and then begrudgingly sent it back.

Honor Defense is a relatively new company, though, so my local FFL didn’t have any in stock. When he could get one, it would sell the same day. I wasn’t the only one who liked the features. 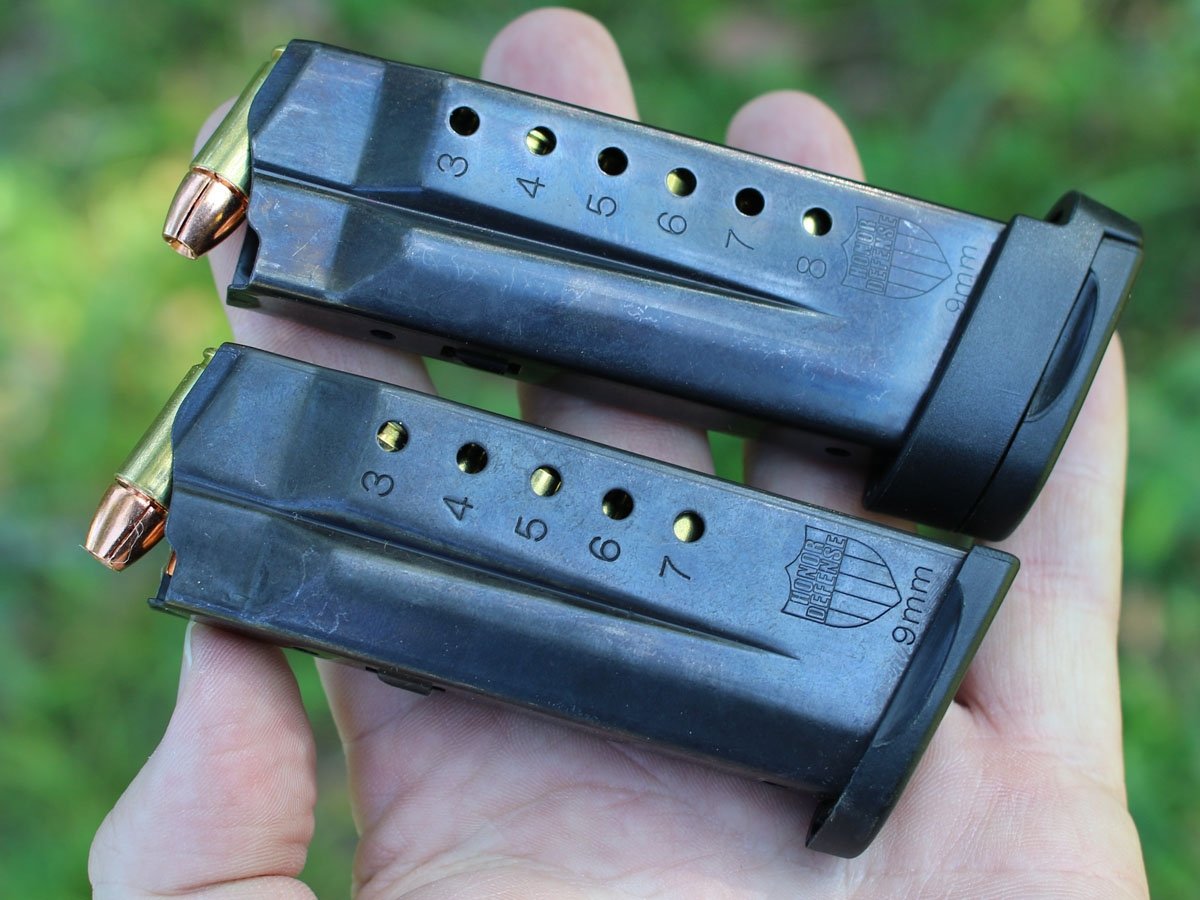 At the end of this summer, though, one came in and sat long enough for me to get in. I could have ordered one easily enough, but I’m picky. I want to get my mitts on a gun before I agree to buy it. And this one was every bit as well built as the test gun I’d seen.

I’ve got close to 1,000 rounds through this one now, and no problems. It works exactly as I’d hoped it woud.

Let’s start at the grip. While most polymer framed production guns have a slightly slick feel, the texture on the Honor Guard feels like the teeth of a fine rasp. It hasn’t been hand-stippled, but it has that feel.

The grip texture wraps around the gun and extends out to places you might apply pressure. 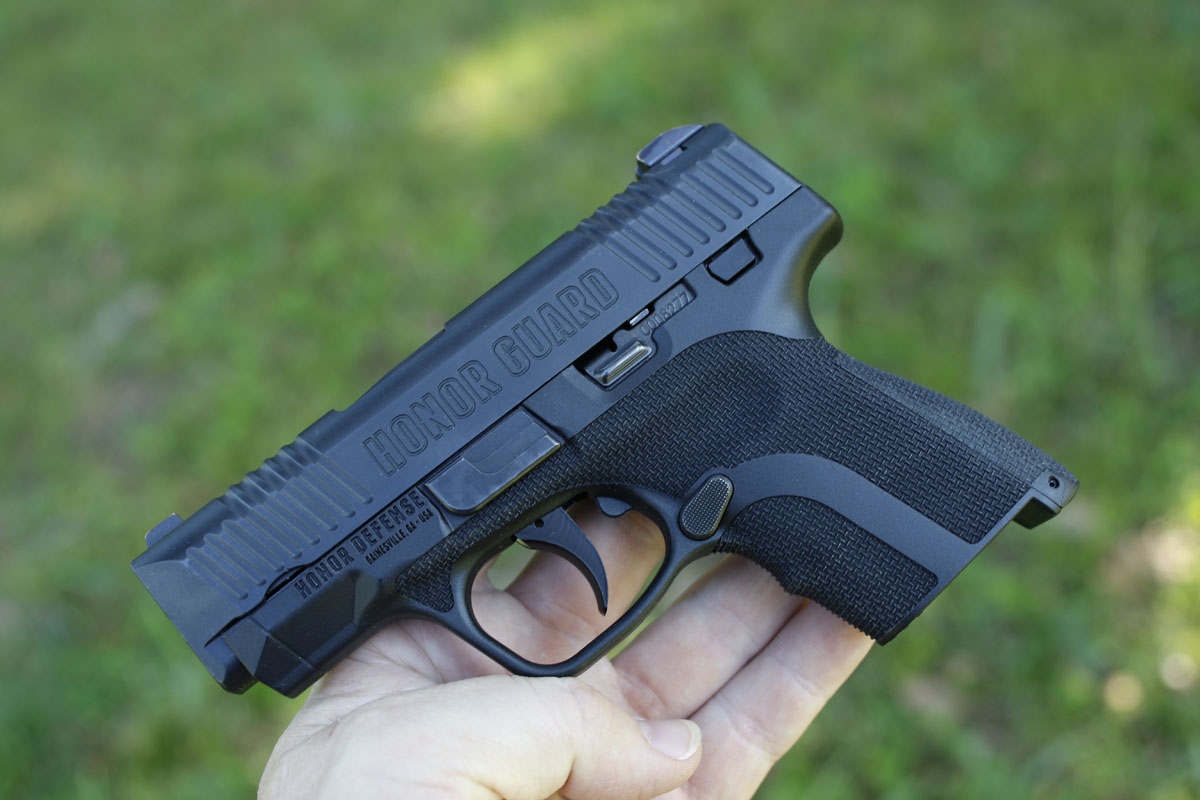 The slide serrations are sharp enough to provide grip on the front and the rear of the slide, but not so aggressive that it prevents a clean draw. As the top of the slide is rounded over, the slide is even easier to grip.

The controls are oversized. The magazine release is oversized and truly ambidextrous. The slide release is also ambidextrous. I don’t carry defensive handguns with manual safeties, but there is an option for that for those who do.

My favorite feature on the Honor Guard is the rear sight. The back of the sight is rounded over. There’s nothing to snag on during the draw. But the front edge of the rear sight is just slightly canted. That shelf allows for easier one-handed manipulation. Rack it on a boot or a belt and you’ll appreciate what I mean.

The front sight is a fat orange dot. The blade itself, just like the rear sight, is steel. That is a big advantage over the competition. The orange dot is easy to pick up. It is a fat dot, though, so don’t look at this as a target pistol.

The front of the pistol slants in toward the muzzle, which makes holstering just that much easier.

The ergonomics of the pistol are ideal. There’s enough to hold on to, and the controls are easy to access. The sights are easy to see. Yet it is very easily concealed. It is thin, not too tall, and just over six inches long. Like most of the others in this class, it is very easy to conceal and still large enough to look like a gun. 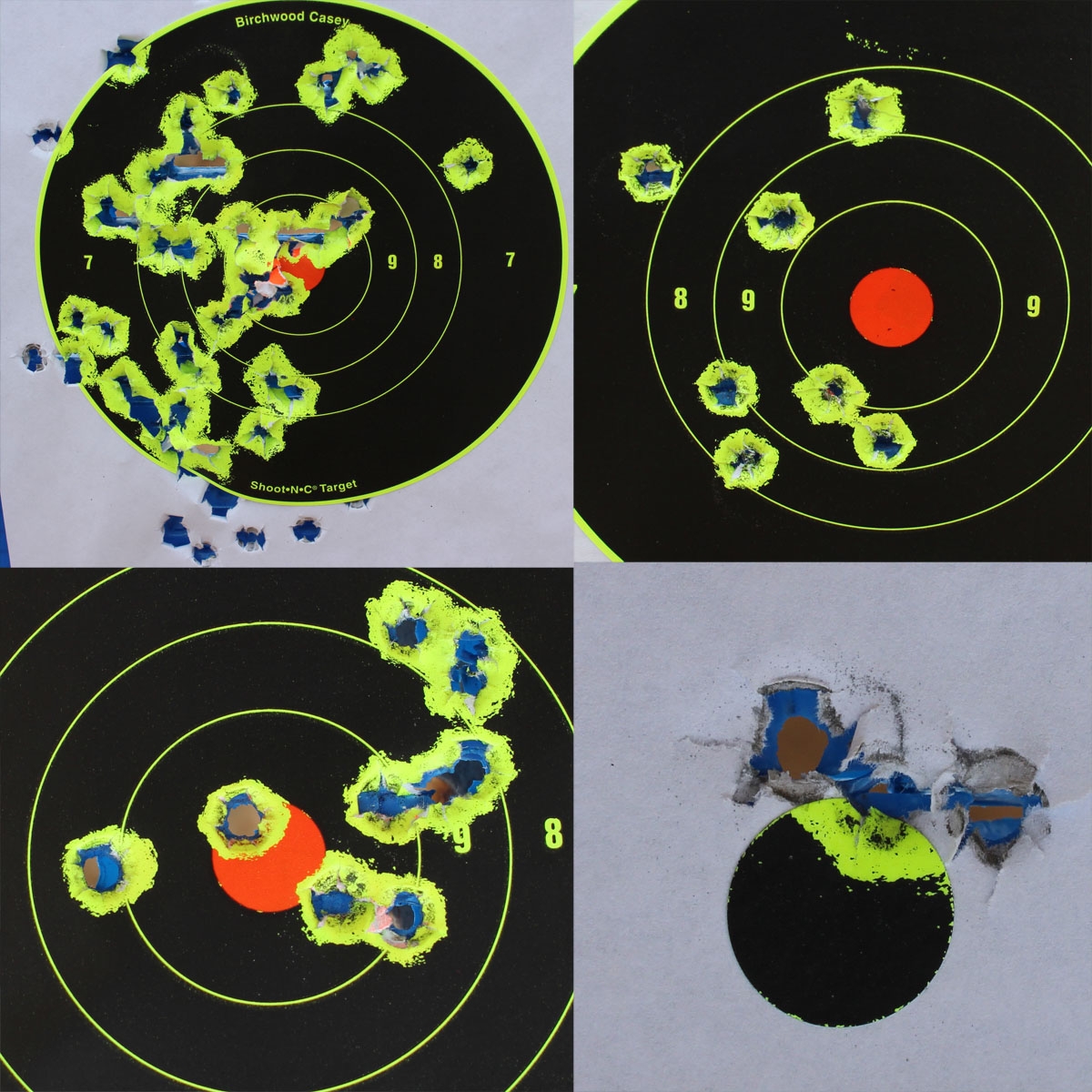 Where the Honor Guard truly excels is on the range. You may notice the differences when you’re standing in you local gun shop. Out on the range, though, the subtle differences become much more significant.

The texture helps mitigate recoil. As this is a 9mm, and it is small, it will jump. Yet the Honor Guard is easier to hold on target than most. The sights make follow-up shots fast, too. There’s nothing to slow down a draw, and mag changes are mechanically efficient. 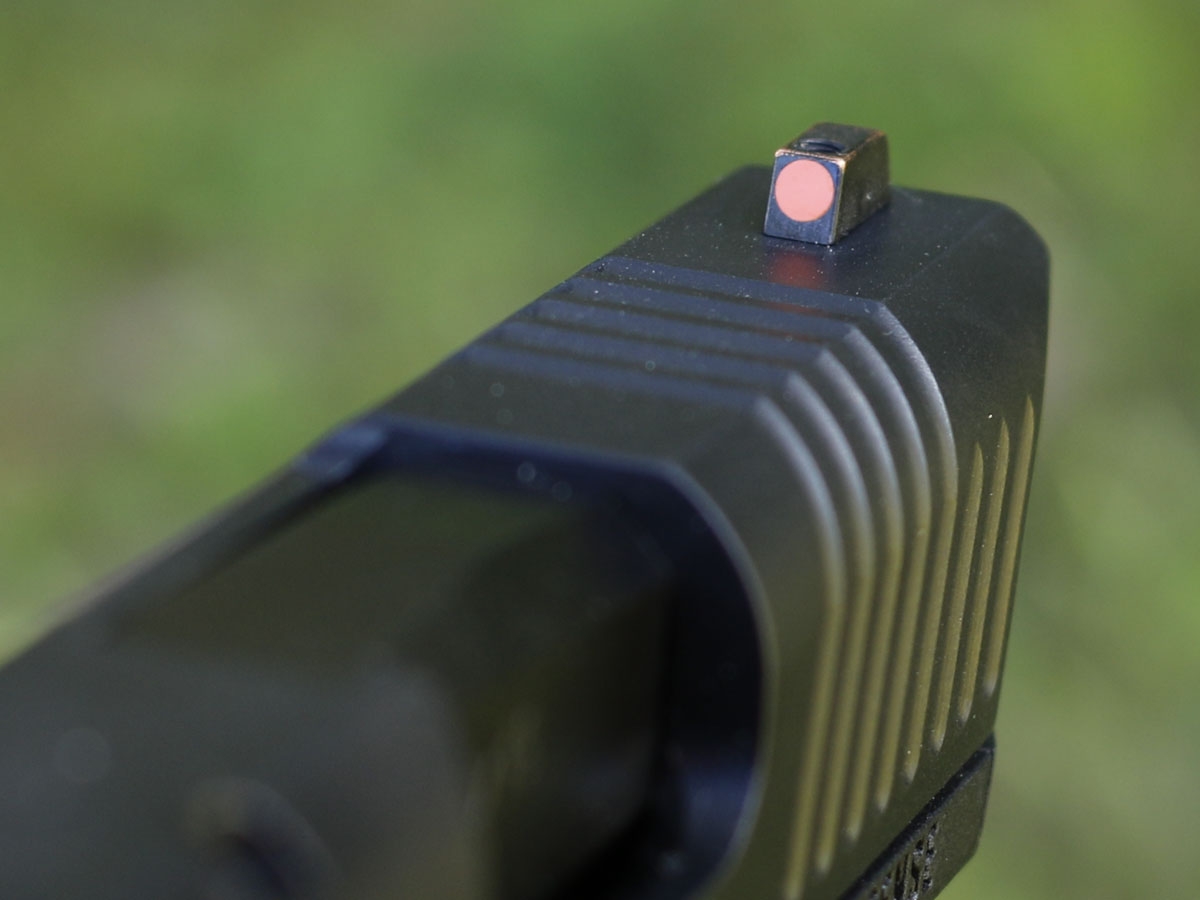 Shot placement during rapid fire is reliable. Slow down, and the accuracy shines.

The bottom line for me was this. When I went looking for a new single-stack, I was faced with so many options. On every one, there was at least one thing I wanted to change. I would want to swap out the sights, or modify the grip texture. Some need larger controls. Only the Honor Guard had every one of the features on my list. 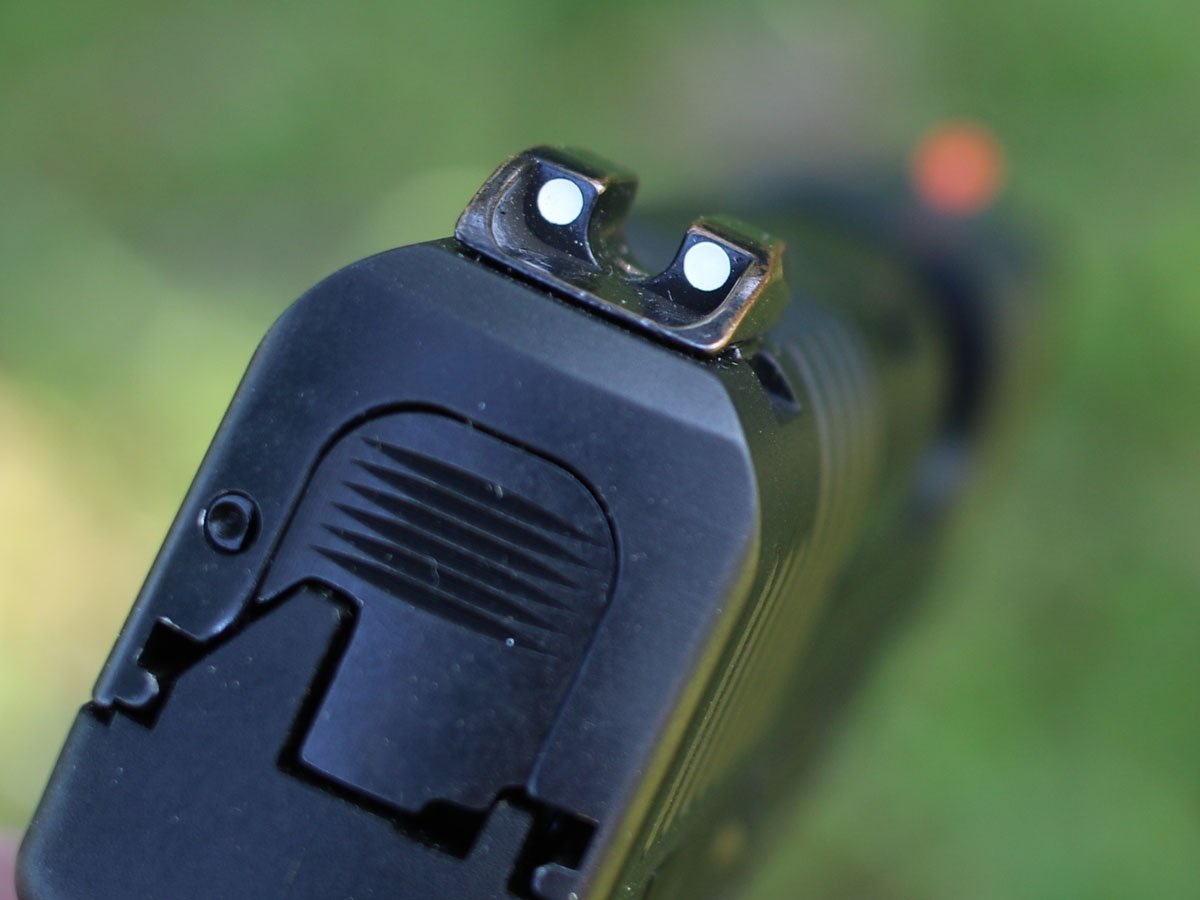 There is one down side to the Honor Guard. Maybe two. Holsters aren’t easy to find. Not yet. There are numerous options out there, but I’m not finding them in stock at any of my local haunts. I consider this to be an inconvenience that will go away in time.

The other is the price of magazines. When I wanted extra mags, I was surprised at the cost. They’re not cheap–close to $35. While they look a lot like a S& W Shield mag, it is not. The magazine is proprietary. So you’ll pay a bit more there. I’ve yet to have a problem with a magazine, but it hurts to pay that much for something I throw in the dirt. I don’t have a single carry gun for which I don’t have at least 10 mags. Yet I’d pay more for 10 mags than I would for the gun (which came with two). What the hell, Honor Defense? 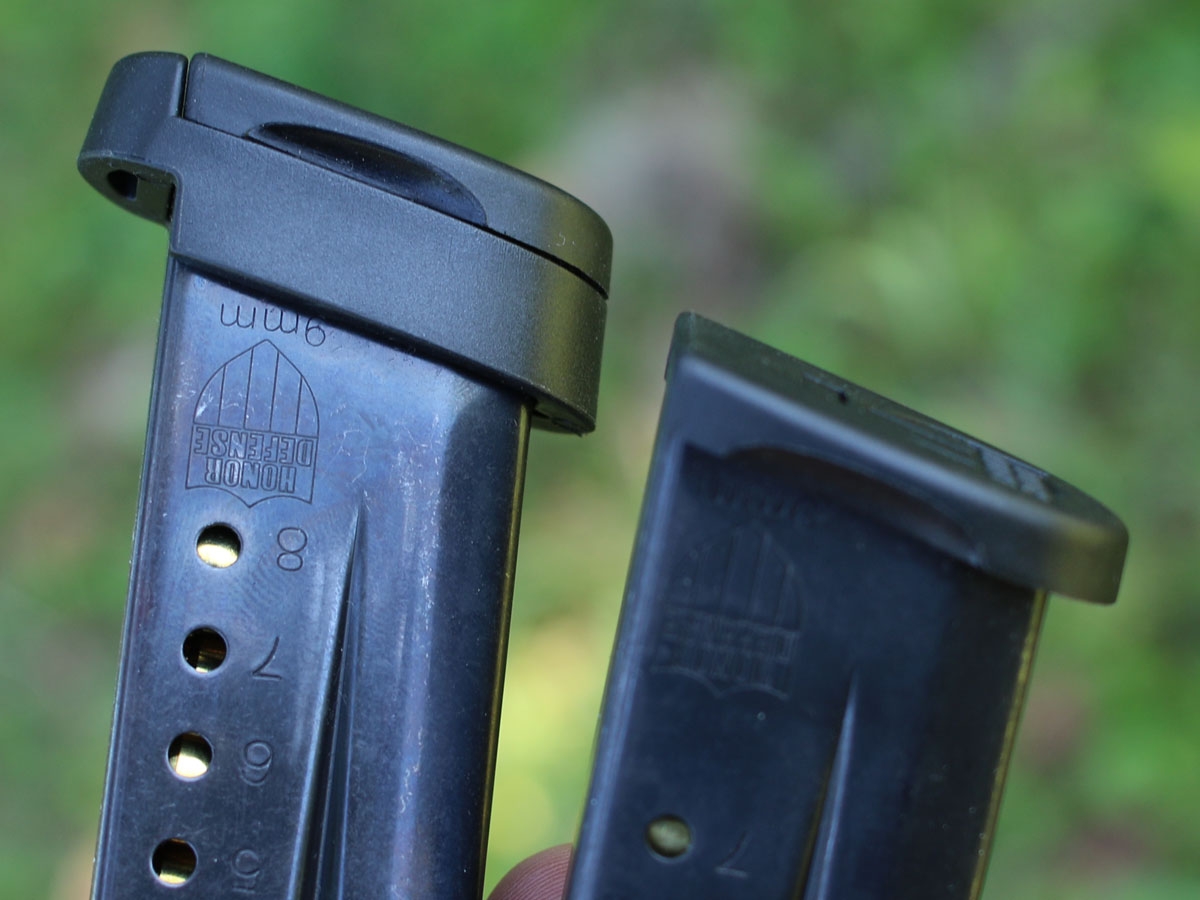 Maybe that’s as good a way as any to introduce the price of this dude. I was out the door with a gun, two extra mags, and a couple of boxes of carry ammo for what I would have paid for my second choice. And even though I wasn’t happy about the price of the mags, the rest was great. 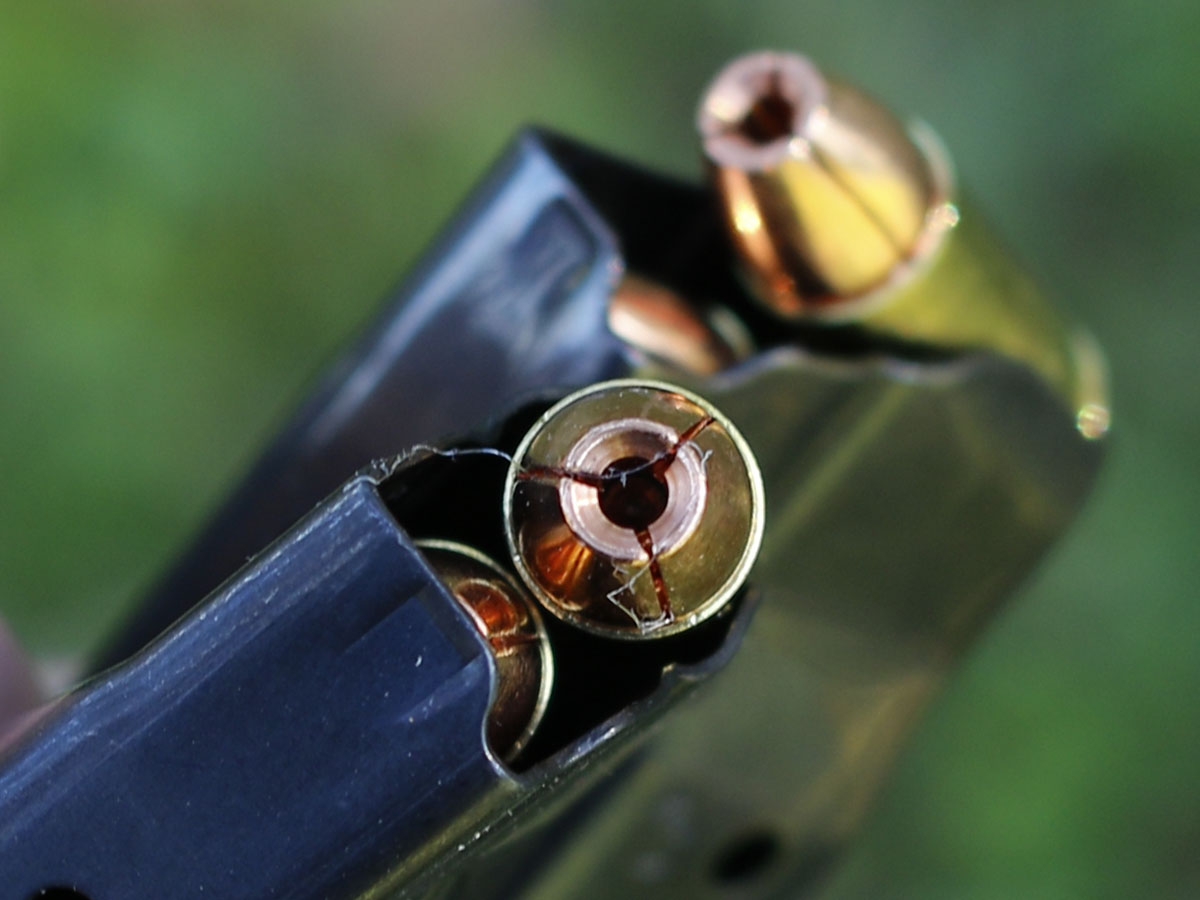 If you haven’t put you hands on one, I’d highly suggest you do.  You won’t regret it.

The Honor Guard is selling for $350 or less. When you look at the relative value, that makes this gun the obvious choice.