The Tac 14 Vs. Shockwave – Battle of the Mini Shotguns 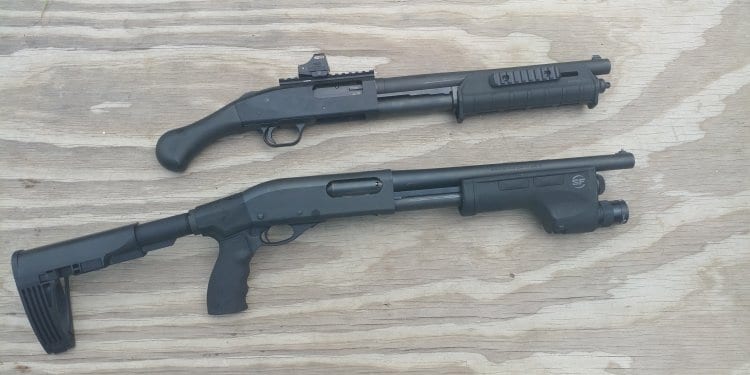 Technically these guns aren’t shotguns, so maybe my title is misleading. They fit most of the technical terms for shotguns, but legally since they’ve never had a stock, they aren’t shotguns. These ‘firearms’ captured American shooters with their NFA defying nature in 2017. I own both and love really love the concept, but which gun do I like more? Let’s find out, today we are looking a little Tac 14 vs. Shockwave.

The Tac 14 Vs. Shockwave War – A Battle Rages

Mossberg vs. Remington is basically the Glock versus 1911 of shotguns. Except both are equally effective and modern guns. So are there enough differences to really separate these guns? If there weren’t any differences this Tac 14 Vs. Shockwave article would be quite short. There are plenty of differences that separate these two guns. 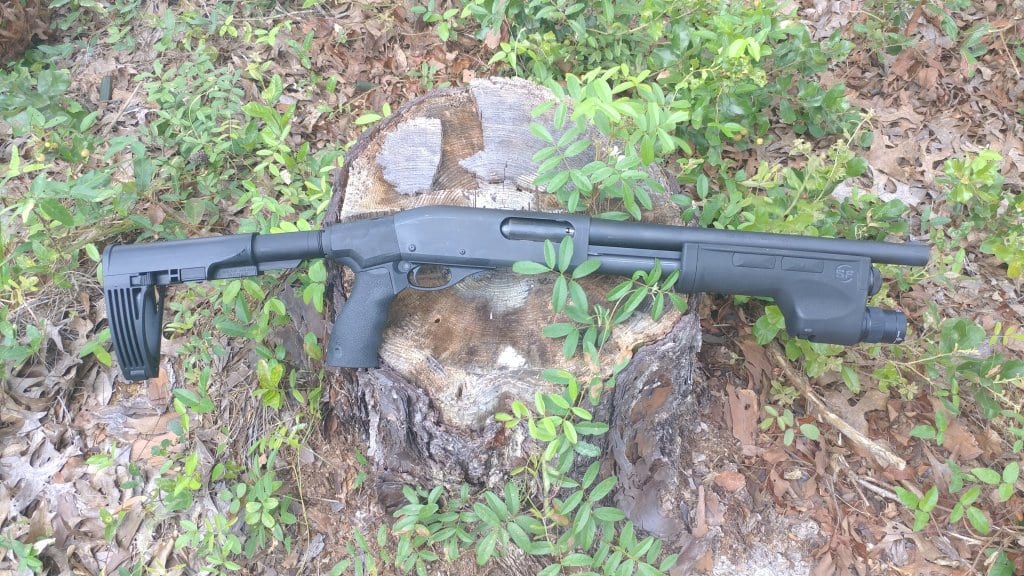 The most obvious will be capacity. The Mossberg Shockwave holds 1 more round than the Remington Tac 14. Is one round a big deal? Well in guns with low capacity I’d say so. Additionally, the Shockwave is compatible with the Opsol Mini-Clip which allows the use of Aguila mini shells. These mini shells give you 9 rounds total. 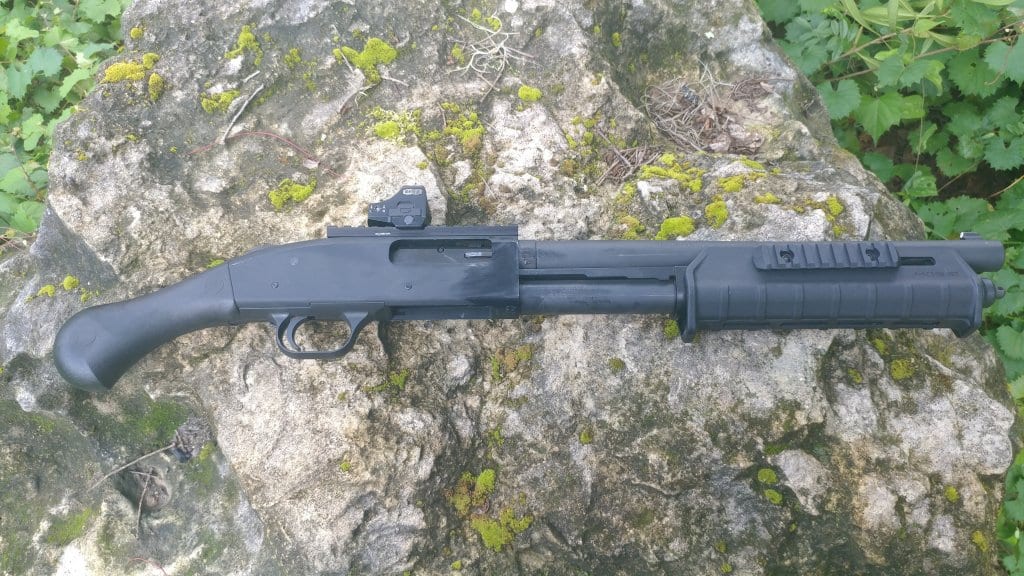 Both guns have a high degree of modularity. There are tons of different pumps, sighting options, and even brace systems to modify either of these guns. This could be a cut and dry category but the Shockwave 590 is drilled and tapped for a scope mount, and adding a red dot makes this gun extremely easy to shoot. 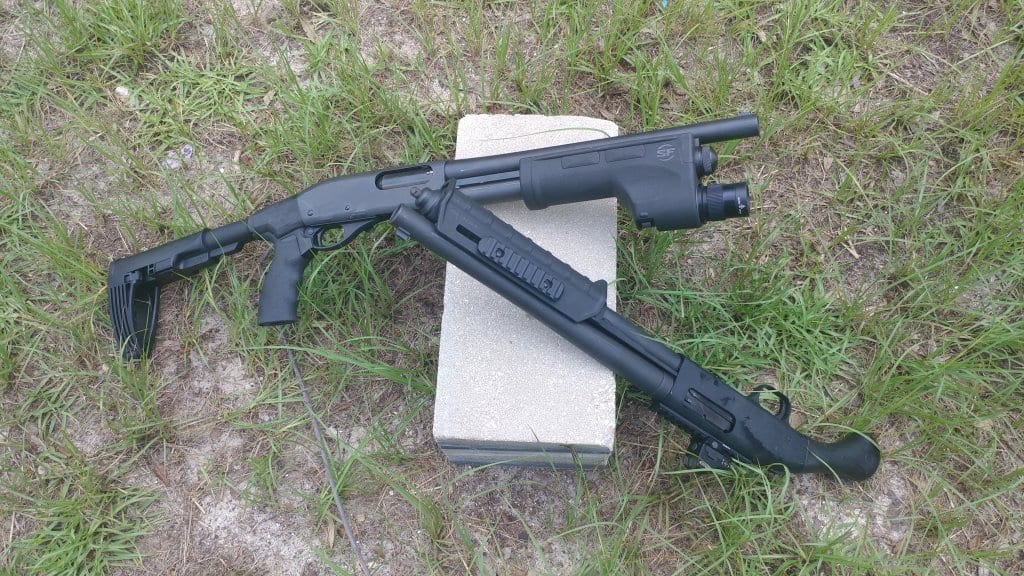 Is our little Tac 14 vs. Shockwave debate already over? The Mossberg certainly has advantages but let’s look at handling the guns.

The Tac 14 comes equipped with the Magpul SGA pump, and the Mossberg comes with a standard ribbed pump with a strap. I like the strap for safety reasons, but I love proper technique more. As you can see my Mossberg now wears a Magpul SGA pump. The Magpul pump is modular and much slimmer. The Mossberg pump had several screws that held the strap to the pump and those bit the hand frequently, often drawing blood. I’ve owned both over a year and found the strap isn’t needed if proper technique is used. 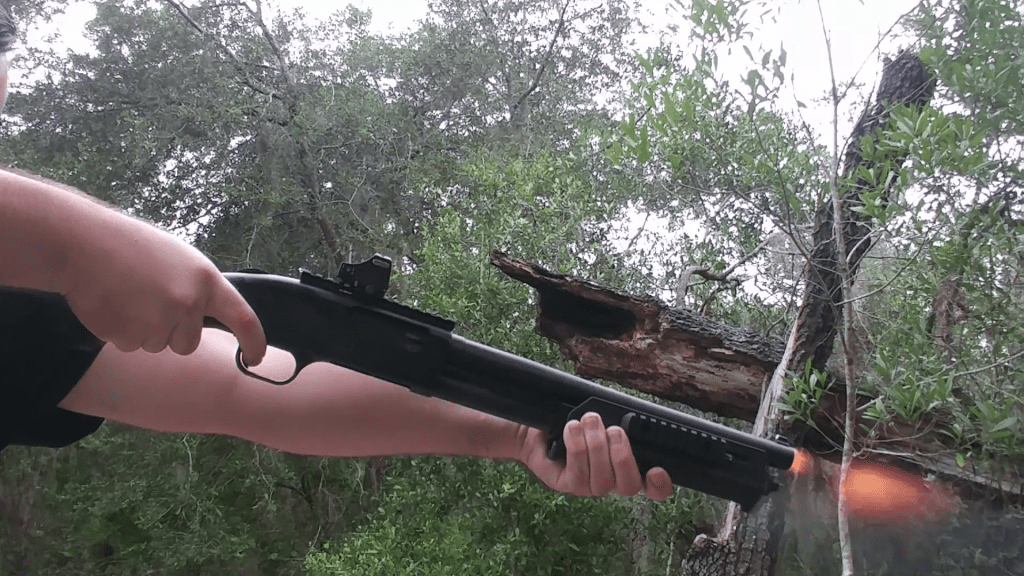 The Mossberg’s top mounted safety is more lefty friendly, but both safeties are easy to reach with the Raptor grip installed, the same goes for the pump release. The Remington’s safety is much better if you choose to go with a pistol grip and brace set-up.

The Remington is almost half a pound heavier than the Mossberg. You really have to ask yourself is this a Pro or a Con? These guns recoil a lot, so extra weight does help cut recoil. However, without a stock that extra weight literally weighs on you. Aiming at eye height is a bit more challenging. In a fair Tac 14 vs. Shockwave battle, I can’t really say this is an advantage or disadvantage so we’ll call it a wash.

Speaking of weight, you may be wondering why the Remington uses a steel receiver versus the Mossberg’s aluminum. Steel is stronger, but I’m not sure how much of a durability difference this makes long term. I’ve never heard of a cracked Mossy receiver.

The Mossberg Shockwave does have the more robust dual extractors. The Remington Tac 14 uses a single extractor. Mossberg extractors are also much easier to replace if they ever warp and break.

Finally what I really like about the Tac 14 is how smooth the gun operates. The Mossberg Shockwave does have a gritty feeling to it. The Remington seems more refined when it comes to the trigger, controls, and pump.

So who wins in a Tac 14 vs. Shockwave fight? We do. I honestly bought both to review and figured I’d sell one when I found the one I liked more. A year later here we are, and I still have both, and that’s not going to change. Both guns are fun, modular, and challenging to master.

Speaking of mastering, I’ll leave you with a little video I did for Govx on handling these guns.