Review: Sand PMAGs, Not FDE But a Blank Canvas 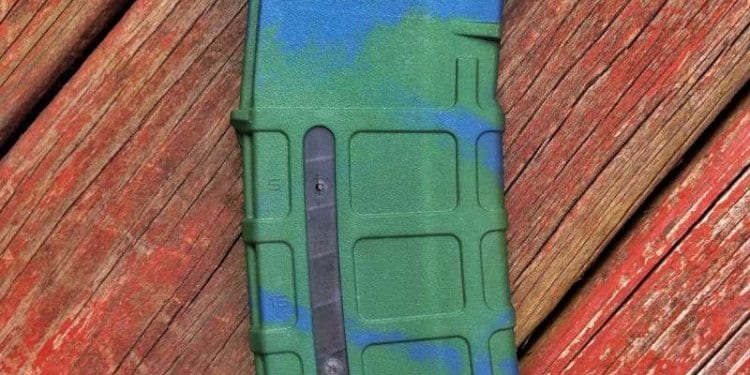 Some people have mistaken Sand PMAGs for Flat Dark Earth PMAGs. Unfortunately they are not the same at all. Flat Dark Earth (FDE) has been made ubiquitous by Magpul. However their new Gen M3 magazines only come in black or sand. These sand colored magazines look almost white and something akin to the color of vanilla ice cream. This makes it difficult to color coordinate with your gear and gun. However this does not mean you should forgo a sand PMAG or get rid of your sand PMAGs. They are the perfect platform for dyeing custom colors.

As shown in the Magpul video above, dyeing a sand PMAG is easy. It does not even require the use of the outdoors and a camp fire. You can do it in your home. You will need a few items. Rit Dye is what they use to dye the sand PMAG a different color. Rit Dye comes in either a bottle of liquid dye or a box of dry powdered dye. These can easily be found in the laundry detergent aisle at your local Walmart. Next you will need a sand PMAG, of course, and while you are at Walmart go pick up a disposable tin pan. This will hold the dye and allow you to dip and soak the PMAG in dye. Optional is the use of a metal wire coat hanger. The coat hanger makes it easier to lower and raise the PMAG in and out of the dyed water. Be careful with the dyed water as it is not safe to be ingested, so if you are working around your kitchen be mindful of where you spill. To start dyeing the PMAG, get hot water, boiling if possible. Fill the pan with enough hot water to cover the PMAG. Also, make sure you have a clean PMAG before you start dyeing it. Add the Rit Dye to the hot water. If you have the liquid bottle version then make sure you shake it up before pouring it into the pan. If you have the powdered Rit Dye, then just empty the contents into the hot water and stir until it is dissolved. Set up the wire coat hanger and disassemble a sand PMAG so that the PMAG slides over it and it holds on well. Dip the PMAG in the hot water. I went with yellow Rit Dye to be a little different. It took about 20 minutes to get the level of yellow I was happy with. Check on the PMAG’s status every couple of minutes to see how well it took the dye. Once you have achieved the desired color saturation, rinse the PMAG in cold water. Now, some colors of Rit Dye are misleading and have surprising results. I tried to dye a 30rd PMAG with Pearl Gray and it came out blue. Even Rit Dye’s Camel color is not what it shows on the box. It turned out a bright green color. I tried to salvage the blue PMAG and dipped it in the camel colored dye. It came out rather well. I also wrapped the blue PMAG in Saran Wrap to block off sections to keep the blue color. It looks like one of the velociraptors from Jurassic World. When dyeing with multiple colors, just remember that you can always go darker. But you cannot go from dark to light. For example, you obviously cannot further dye a black PMAG.

Dyeing a Sand PMAG does take some trial and error, so go slowly. Test smaller parts like the base plate and dust cover if you want to see the desired colo beforehand. Let us know what worked for you in the comments!