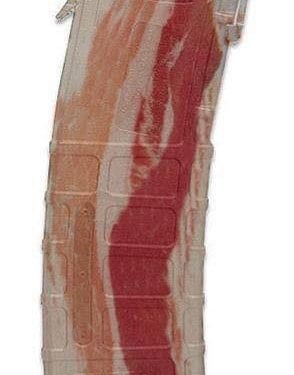 Earlier we posted our RIT DYE guide to dyeing Sand PMAGs. Click here if you haven’t seen it. I had also posted an even earlier article about Sand PMAGs and showed some custom dyed PMAGs that I made.

Recently Magpul shared this photo of what looks like a Bacon themed PMAG.

Looking at the photo, it does look like a piece of bacon. The Sand colored polymer is the fat and some dye was applied to look like the meat. Having dyed a bunch of PMAGs for the Rit Dye guide, I am curious how this was achieved. Considering how sterile the photo looks, I am suspicious that it might just be photoshop. If it was real how come we do not see other photos of it being used and displayed in an AR-15?

Ok, let’s assume it is real. How did they make it? I can only think of two scenarios using Rit Dye. First possibility is that they hand painted this with a paint brush. However looking at the subtle application of orange and red does not look like sterotypical brush markes. The other possibility would be to mask the PMAG with either vinyl or hot glue. But then it would be almost impossible to get those small sublte strokes of red you see in the photo above. This is why I think it might just be photoshop. I should try making a Bacon PMAG.