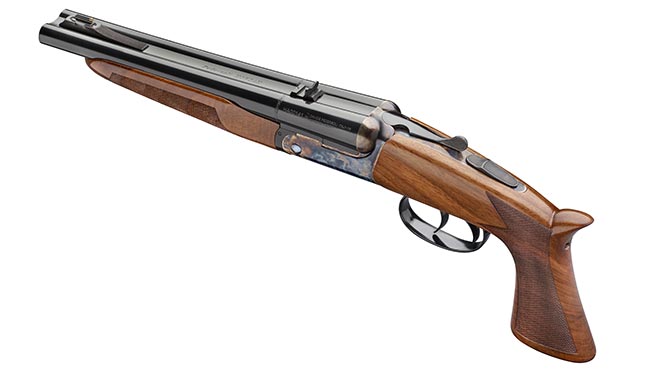 Italian Firearms Group is now importing a sexy new gun, the Pedersoli Howdah 45/410. Made by Pedersoli in Italy, the new gun is a pistol that resembles a sawed-off shotgun that you imagine might have been carried to defend a stagecoach moving the payroll for a railroad crew. In fact, the double trigger gun is modeled after the Auto & Burglar pistol made by Ithaca nearly 100 years ago.

The new gun is not a scattergun, but a pistol with rifling in both of the side by side barrels. Chambered for the .45 Colt cartridge, the gun will also fire .410 bore shotshells much like the popular Taurus Judge series of revolvers. The barrels are both a little more than 10” in length and can chamber 3” shotshells in addition to the 2.75” ones.

I was fortunate enough to get one of these early production guns for testing, and so far I’ve had a blast with it. It is not what I would deem the ideal home defense weapon due to its low capacity and somewhat unwieldy manner. However, I do love the look and workmanship of the gun. 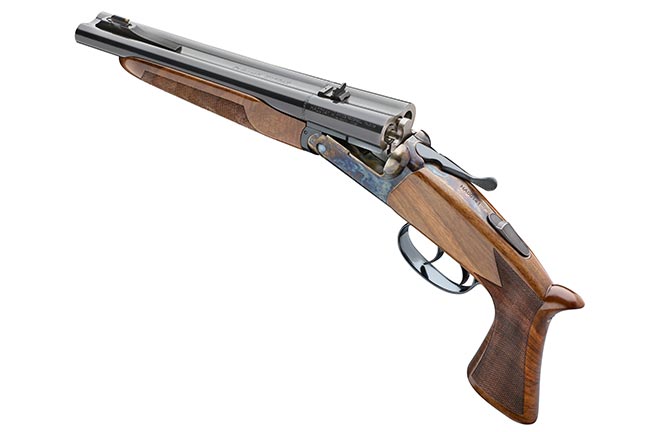 The barrels have a fine black finish and the receiver has a color case hardened finish. Both the stocks and the fore-end are beautiful polished hardwood with fine checkering.

The gun is just plain pretty.

It is, as one might expect from a double gun, somewhat heavy toward the front end. It can be aimed and shot one-handed, though the use of two hands is definitely preferred. Up front, it has a brass-colored sight on a ramp with a folding leaf-type V sight in the rear.

A tang mounted manual safety is automatically activated when the breach is opened. Once loaded, slide it forward and the gun can be shot.

Sometimes guns have a very specific purpose related to serious business: self-defense, police work, or putting food on the table. Other guns can remind us that shooting can be fun and beautiful guns can be collected without there being a need for a tactical application. I feel the Howdah is one of these. Though it can be used—quite effectively, I would imagine—to repel boarders, I think the Pedersoli Howdah would be one of my fun guns instead of a work gun.