Polymer has always been a controversial subject in the firearms world. The Glock style pistol design was not accepted readily. As a gun culture, we’ve moved on from that, and polymer is seeping its way into gun design: especially lower receivers and pistol frames. Rifles the SCAR, the ACR sport polymer lowers, the KelTec Sub 2000 sports polymer lowers, and so on and so forth. What about the AR 15? What’s the standard for polymer lowers? Well, I got my hands on the FMK AR1 eXtreme AR 15 lower.

The FMK AR1 is a AR 15 lower made entirely from polymer. I’ve experimented with polymer-based AR lowers before, and that was with the ATI Omni Hybrid. I found it to be terribly out of spec, and when I sent it back, I received a replacement model still out of spec. I also destroyed a polymer 80% lower, but that was more on me than the gun. 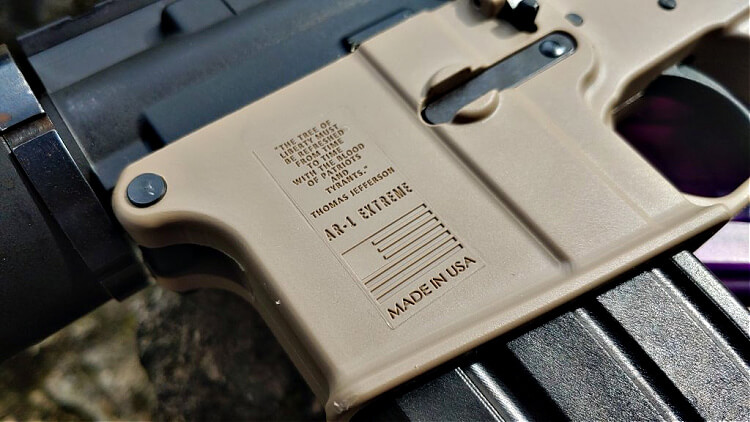 After that, I wrote these lowers off until I stumbled into my local gun store, and my dealer showed me a shipment of FMK AR1 lowers. The polymer design wasn’t what took me back; the 22 dollar price tag was what took me back.

Twenty-two bucks, plus tax and a background check let me leave with an AR lower for 30 dollars out the door. The big question was, what to build on it? Well, as fate would have it, ammo is pretty much dried up everywhere around me but I had tons of 22 LR, and a 22 LR AR sounded plenty fun.

Inside the FMK AR1 eXtreme Lower

This all-polymer receiver weighs 4.3 ounces, making it approximately half the weight of a standard AR 15 aluminum receiver. They come in a multitude of colors, including classic black, tactical as hell FDE, and even Tiffany blue.

FMK Firearms claims it will work with any caliber that squeezes into a standard AR 15 lower receiver from 22LR to 50 Beowulf. Big claims, but I went small with the 22 LR. FMK Firearms states explicitly that the lower is made to function with mil-spec upper receivers, so anything outside of mil-spec is up in the air in terms of compatibility. 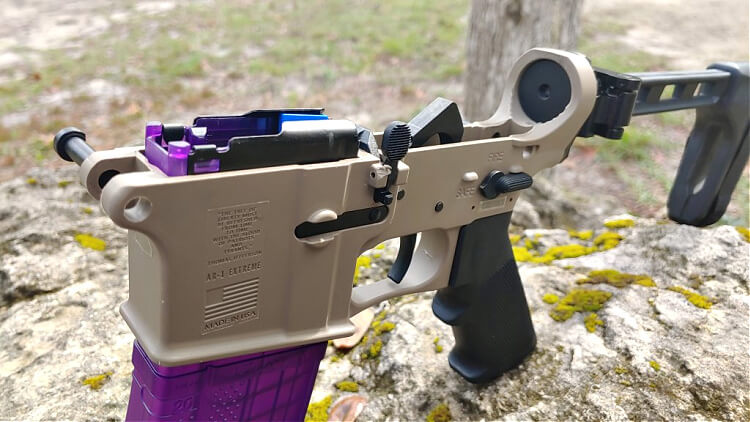 Also, when it comes to installing lower parts kits, you might have an issue with kits outside of mil-spec. The FMK AR1 lower receiver is compatible with mil-spec kits, and some kits might not be so compatible with the polymer design.

Polymer AR 15 lower receivers have a weak point at the point where the buffer tube threads into the lower receiver. This is where the most stress is placed on a gun. However, this wasn’t an issue with my 22 LR build because the CMMG 22 LR conversion kit has a built-in buffer.

Squeezing an LPK In the FMK AR1

Shoving the parts into the FMK AR1 lower was almost no different than any other lower receiver. My caveman ass uses a pair of pliers to install the roll pin, which holds the bolt release, and that scraped a portion of the receiver pretty good. I R grunt and all. 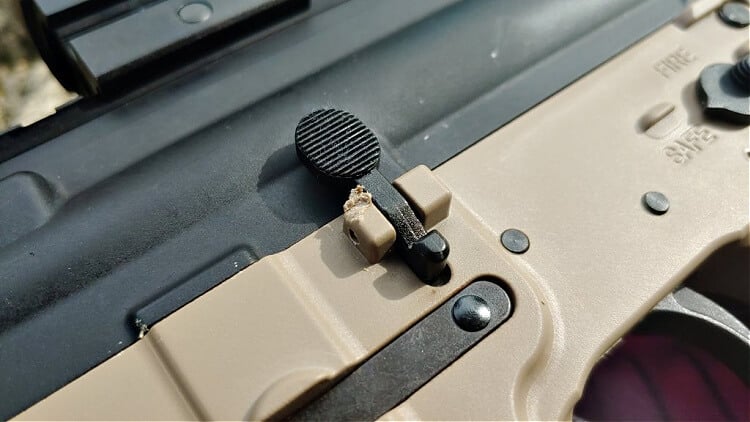 The FMK AR1 lower works perfectly with my Real Avid tools, and they fit just perfect for installing the little parts and pieces. The process was quick and easy, and I noticed no significant difference between this polymer lower and a standard aluminum model installation wise. Unlike my previous ATI Omni Hybrid experience, the FMK AR1 lower was in spec and fit the parts, pins, and springs without issue.

Once I tacked on the upper receiver, I noticed that the pins that connect the upper to the lower are incredibly tight. Detaching the upper from the lower is best done with a punch to avoid frustration.

The Build and Beyond

I outfitted my FMK AR1 with a KNS Precision MCX stock adapter. Since the 22LR CMMG conversion kit doesn’t need a buffer, I don’t need a buffer tube. Instead, I used the KNS Adapter with an SB tactical FS1913 brace.  This forms a super light and compact little 22 LR AR pistol. 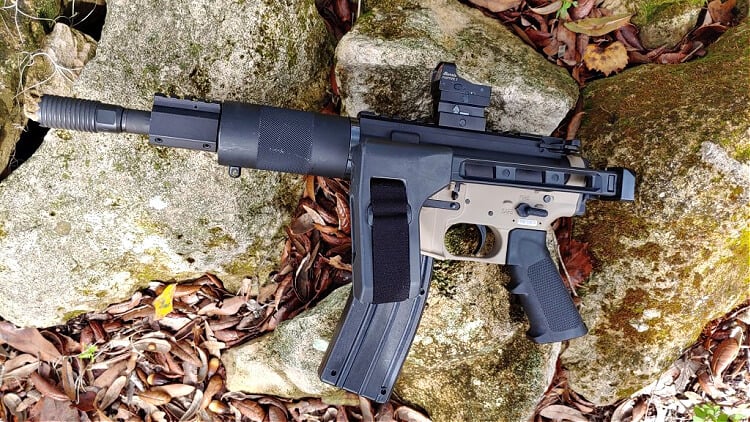 The magazine squeezed in and out the magazine well without any noticeable tightness. The magazine release and bolt lock move without issue, and they click and pop as necessary. The only apparent friction comes from the safety. It doesn’t glide; it just bumps along and is somewhat tight. It’s not tight enough to make a big difference, but noticeably so.

Since I eliminated the buffer and receiver extension, I had zero fears of the gun breaking under pressure.  I loaded up three of my CMMG 22 LR conversion magazines and went to the range.

I didn’t go alone as my precious nine-year-old saw an opportunity to play with a gun that looked like something out of Fortnite and took it. We spent a good part of our Saturday shooting steel, paper, and we even resorted to popping Coke cans in the true spirit of plinking.

The lower held itself up to 333 rounds on the first day, and another 300 CCI rounds the following week. None of the controls ever felt challenged or challenging to work with because of the lower. Rapid-fire, reloads, and more plagued the lower challenging it to give out, yet it persevered. 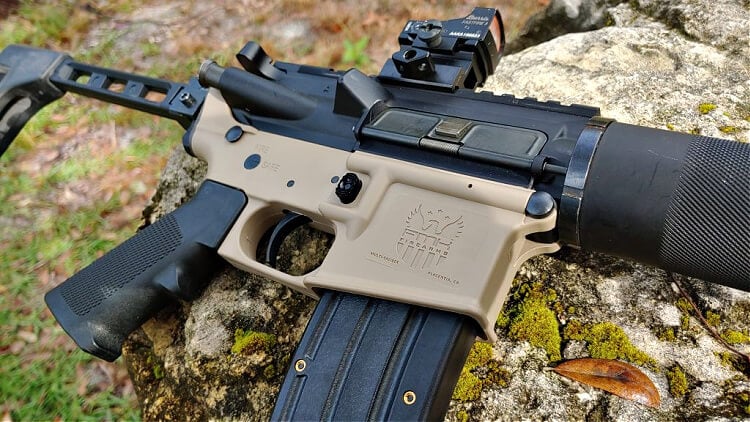 I then used a rock as a bench rest and pressed the lower into it. My goal was to see if I could cause it to flex and create a malfunction. I was unable to create a malfunction. With Glocks, I could create a flex in the grip with a good tight squeeze, so I assumed a 1990s MOUT style magazine well grip and attempted the same. I can create a tiny bit of flex, but it caused no issues. Heck, the magazine would still drop free as I created the flex.

With the current run on guns and ammo, finding the parts you need is tough, and finding them at a good price is even tougher. I was happily surprised by the quality of my little 22-dollar 22 LR lower receiver. I don’t doubt I could create a functional 5.56 on one of these lowers. In fact, I actually bought another with a plan to do so. Of course, now I gotta find the rest of the AR parts. The FMK AR1 eXtreme lower receiver has given me a little more faith in polymer AR lowers, and I’m curious to see how far they’ll go.