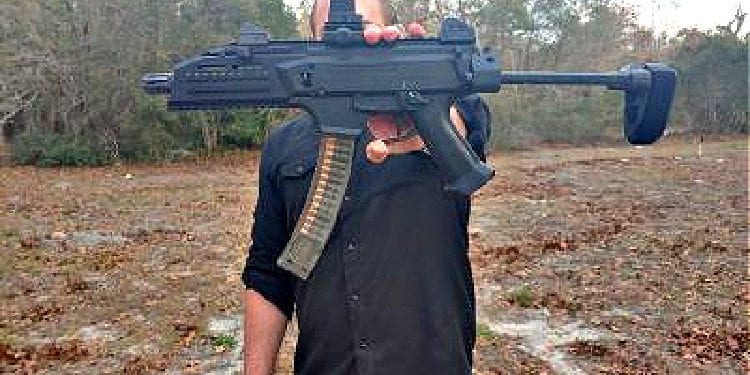 CZ’s little Scorpion SMG wannabe has become a big hit in the US civilian market. As always, whenever a new gun becomes popular, companies come out of the woodwork to outfit it with accessories, upgrades, and, if we are lucky, magazines. The Scorpion has had the likes of Magpul, Manticore Arms, and ProMag produce magazines for the little fella, and just recently, Elite Tactical Systems has joined that crew. ETS is well known for its transparent magazines they make for the AR and Glock series pistols. 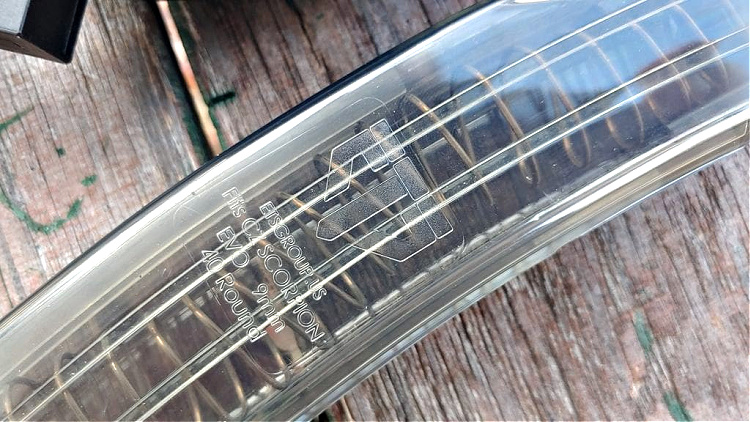 Take a peak through the ETS Scorpion magazines. The transparent design is their trademark feature. This makes it easy to see your ammo count, as well as any foreign materials that have entered the magazine.

Unlike most companies, they seem to be more open to producing magazines for various caliber’s platforms and in various capacities. If you want a Glock 42 extendo, ETS is the way to go. They’ve worked that same magic on the Scorpion and have produced both 30-round and 40 round magazines that are made in the same transparent polymer material they’ve become famous for.

Well, looking cool is half the battle, and clear magazines most certainly look cool. Being able to see the rounds inside your magazines is pretty slick. Second, clear magazines allow you to quickly see how much ammunition is left in the magazines when shooting. It’s smooth and allows for an instant ammo check.

Seeing how the springs compress in such an odd way is interesting as you load the magazines. The springs tip and move and bend in a somewhat crazy manner as you slip round after round into the magazine. 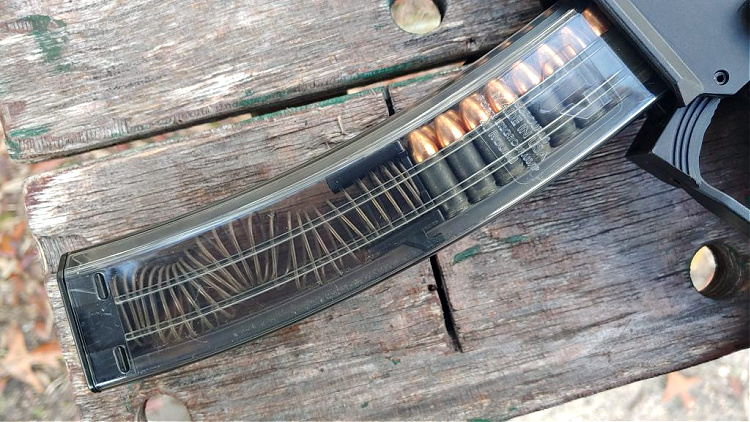 The spring starts to look awfully odd once you start popping rounds in.

Loading the ETS Scorpion magazines is relatively simple, and it doesn’t become anywhere close to difficult until the last two rounds. Even then, they squeeze in without too much thumb bending and breaking. The ETS Scorpion magazine slides right into my standard Scorpion, my Micro, and my bullpup perfectly. They do fit a little loose, at least compared to OEM CZ magazines.

How do I test a magazine?

Well, let’s examine what a magazine does and the weaknesses inherently attached to magazines. Their goal is to feed ammunition to the gun. They are quasi-disposable, at least in a gunfight, and should be able to be dropped and dirtied without issue. That’s how I approached this test and evaluation with the ETS Scorpion magazines. 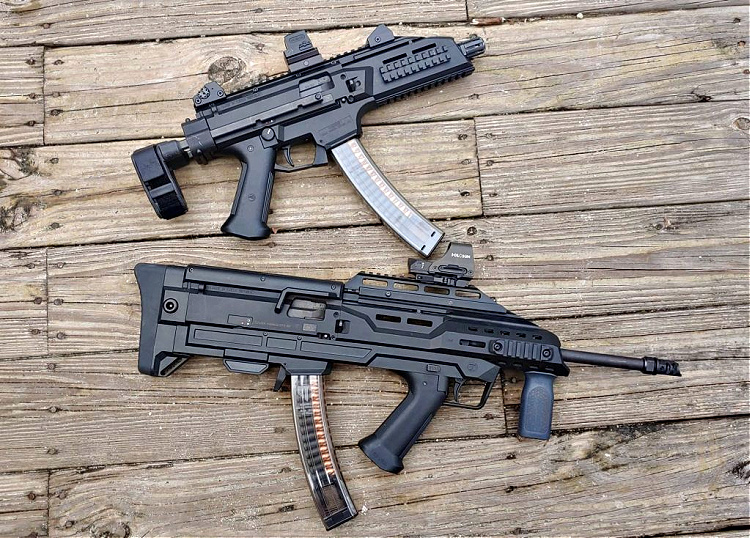 The Scorpion is a hugely popular platform, and the industry has embraced it. Companies like Magpul, Manticore, and now ETS are producing magazines for the Scorpion. The ETS magazines are the first 40-rounders on the market.

First and foremost, they gotta be able to feed ammunition.

I loaded my ETS Scorpion magazines with the driest and dirtiest ammo I had—Winchester Forged. This steel case stuff is super dry and causes all sorts of friction inside the mag. I’ve seen this stuff disable good magazines due to its crappiness. It is also super cheap, and I have lots on hand, so it worked out well.

Ammo is tough to get right now, so I focused most of my testing through one of the two ETS Scorpion magazines I had. While one magazine only saw 80 rounds of ammo, the other saw 320 rounds of Winchester Forged. In my testing, only once did I run into a magazine related feeding issue. The follower didn’t rise fully into place to allow a round to feed. I slapped the bottom, and the follower fixed itself. 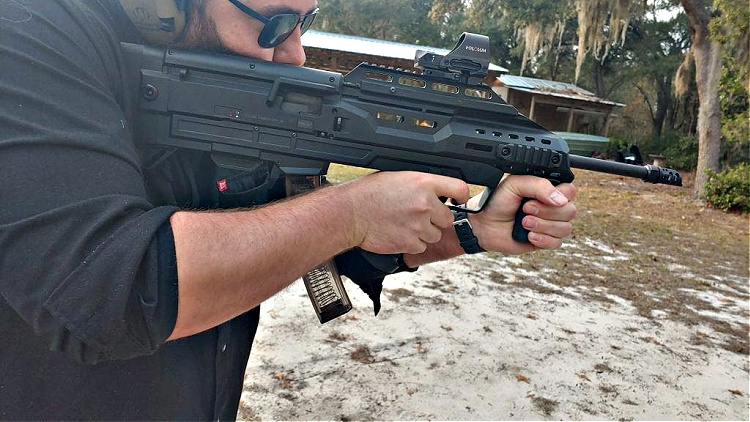 The ETS Scorpion Magazines are robust, transparent, 40 rounders that feed reliably in every model of the Scorpion.

Remember when I mentioned they were kind of loose in the magwells? Well, I decided to hold the magazine and try and shift them in various directions as I fired. While the mag moved back and forth a bit, it didn’t cause failures. Admittedly that was only in the Scorpion standard magazine. Fiddling with the magazine in a bullpup isn’t easy when shouldering the rifle.

In the past, ETS Glock magazines had an interesting issue: when dropped, they’d spray rounds everywhere. I wanted to see if this issue followed the ETS Scorpion magazines. I loaded both to the max 40 rounds they’d hold and dropped them from shoulder height onto a semi-hard limestone road. 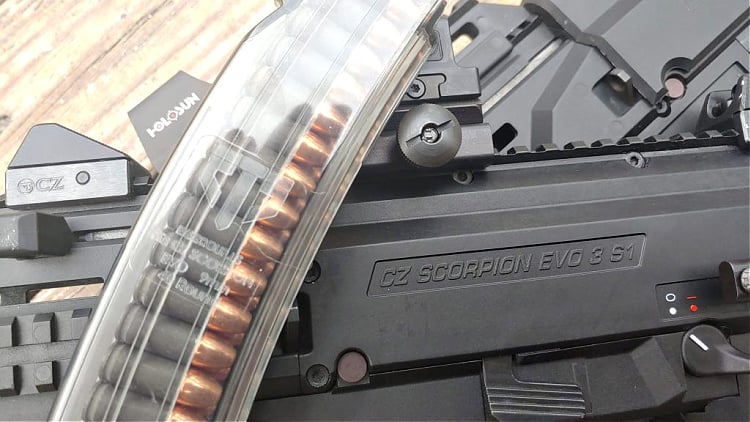 The transparent design lets you see my terrible taste in steel-cased ammunition. Winchester Forged is super dry and cheap ammunition and was a worthy choice to test the magazines.

Dropping them also didn’t seem to break anything. Nothing is rattling around, and the ETS Scorpion magazines seem to be well made. Although, they are super thin and that gives me some concern for long-term durability.

I live on a sandhill. A Florida sandhill has a thin, beautiful white sand that sinks deeply into every crevice on everything. It’s brutal on guns and magazines, so I found it a great place to test the ETS Scorpion magazines. I ran two-shot reloads and dropped the magazines over and over in the sand. I let em fly, and if they’re anything like Anakin, they hated it. 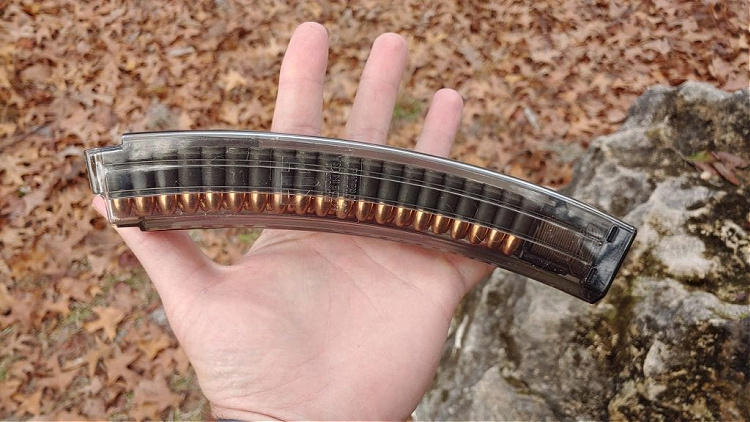 The ETS Magazine before it took several dives into a sand hill.

However, as much as they hated it, they continued to work. They fed and ejected without any issues. I could hear the sand grinding as I loaded the magazines, and the clear design allowed me to even see the sand in the magazines. Yet, the magazines flowed freely, even with the craptastic Winchester Forged ammunition.

6. On the Subject of Reloads

When I started my reloading testing, I did find that the ETS Scorpion magazines are much thinner than OEM magazines. They did not securely fit in my polymer Scorpion mag carriers. They bounced around freely with zero retention. In textile-style soft mag pouches, they seemed to work fine, especially in the BFG Ten-Speed pouches. 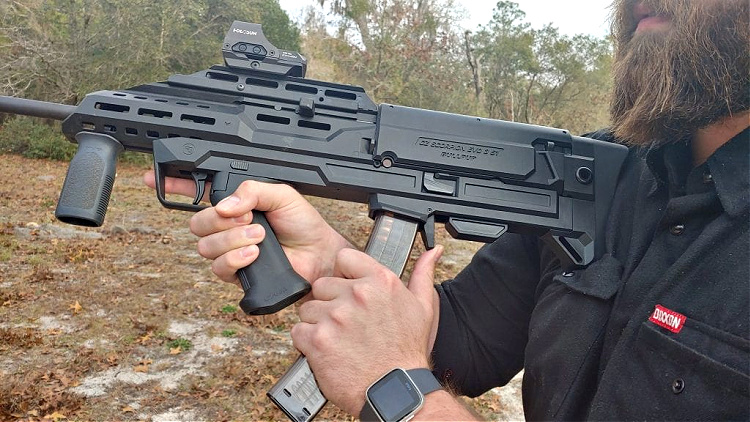 Running reloads with the bullpup is always a fun challenge.

ETS magazines have always worked well in my experience. I’ve used them in my ARs, my Glocks, and even the new P320 variants. They always seem to work well and be remarkably affordable. The ETS Scorpion magazines performed on par with the OEM variants, and I have no hesitation in continuing to use them. The additional ten rounds is not an insubstantial amount of ammunition to add to your weapon. 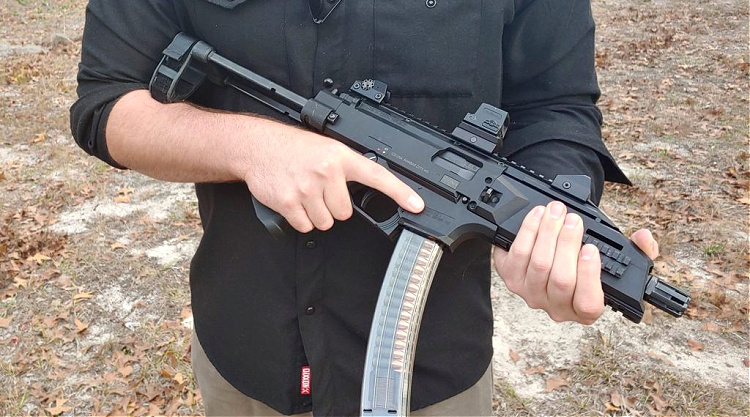 The extra 10 rounds adds some substantial length to the magazine. However, the ten extra rounds can be a great addition for home defense. Carrying spare mags when things go bump in the night is not a practical option.

From a home defense perspective, you’ll be unlikely to be carrying a reload, so the extra ammo is also lovely to have. I think Elite Tactical Systems has been refining their magazines and increasing their quality with every new model. They stand to become a significant player in the magazine market if they can keep the quality high and their prices low.

Check out the ETS Scorpion magazines now, and let us know what you think.