Do weapon mounted lights make you a target? This is an interesting conversation to have. It typically comes up when we discuss handguns. Most people seem to be fine with long guns and lights, but a light on your concealed carry handgun, oh boy, get ready. With this in mind, I decided to do some experimenting and testing to see if your weapon light actually makes you a target or not.

The Argument for Light Discipline

There is certainly some truth to the idea that a weapon light can make you a target. As a Marine, we had lights on our rifles but were also taught light discipline. We didn’t just walk around villages at night, shining our lights all willy-nilly. We only used them when necessary, which was nearly never in the grand view of things.

Light discipline is critical for someone in a duty role. You are actively searching for violence, and waving a light around an alley as you search for a guy who just held up a liquor store is certainly not a great idea. Using light in short controlled bursts is crucial, and proper training helps you figure out how and when to use lights.

With that said, let’s position this into a realistic concealed carry scenario. Do concealed carriers have the same challenges? They should certainly invest in low light training, but does a weapon-mounted light make a concealed carrier a target in a civilian defense situation?

The Weapon Mounted Light and CCW

Recently we have seen a rise of companies making comfy and well-made holsters for big, light-equipped concealed carry firearms. The Phlster Floodlight, in particular, is well known for its ability to conceal weapons wearing full-sized lights like the TLR-1 and X300U series. These lights are big, bad, and powerful.

I’m not claiming that a weapon light is necessary for concealed carry, but I can certainly see why someone would choose to carry a light-equipped firearm. I’ve done so myself on occasions where I’m far from home, traveling at night, or even just working the night shift. I can see the utility, but I don’t necessarily believe a weapon light makes you a target as a concealed carrier.

In fact, I think it’s a useful tool for positive identification. That’s not to say a good handheld light couldn’t do the same. Positive identification ensures you are engaging an actual threat. In a low light situation, things might seem confusing, and a light allows you to identify and recognize the threat.

I wish I had simmunitions to test this out at a little more realistic range, but I do have blue guns and weapons lights to see if someone could get the drop on me while I hit them with a weapon light. Your typical concealed carry encounter isn’t you actively searching for the threat. If the threat has departed and is hiding from you, your best bet tactically, likely legally, would be to find a means of escape.

I mounted my light to a blue gun and waited for the sun to dip below the horizon. A friend of mine had another blue gun. My gun had a TLR1, and his didn’t. The plan was simple enough. He would position himself randomly at ranges from five yards to 50 while my back was turned.

Upon a threatening action, I had to turn, aim the light and gun, and ‘shoot’ him. Regardless of range, I could find his gun and get a good sight picture quickly. When he hid behind some form of cover or concealment, I could find him and identify the threat.

Not only that, but the power of the TLR1 made it tough for him to see anything at ranges out to 30 yards. At 50 yards, he still really only saw the light, but it wasn’t nearly as discomforting or blinding.

Blinded By the Light

We also swapped between a weapon-mounted light and a handheld light of similar power. He couldn’t tell the difference when it was pointing at him, so it’s not like he knew a gun was pointed at him when I used the WML versus the handheld.

We also took a break and allowed his eyes to adjust to the darkness while I went inside and dealt with the light. Even without my eyes being adjusted to the dark as soon as we started, my weapon-mounted light overrode his night vision.

Realistically he was the aggressor and would have the drop on me anyway. The light didn’t make me a target because I already was the target. In a real-life situation, you only get to react. What the light did was allow me to find and identify the threat.

We practiced a situation where I identified him, and we got into a situation where both of us started moving—sprinting off the X to cover or just get away from the situation. If I ran with the light on, he could easily track where I was going, but with it off, it was just as confusing for both of us. The difference was once I got to cover, I still had a light I could use to try and find the threat’s position.

Our little experiment tested a light when it’s used solely as a device to illuminate present threats. I can’t imagine a realistic situation where I’m stumbling around using my weapon light to search for a threat while concealed carrying or even during home defense. I don’t live in a big enough or dark enough home not to have some idea of where the threat is.

Even if I did, the bad guy is dealing with the same level of darkness I am. My weapon-mounted light gives me an edge as long as I’m not walking around with it on in the holster. I can’t imagine a situation where I would just be waving my light around like Bert Kreischer taking out his trash. 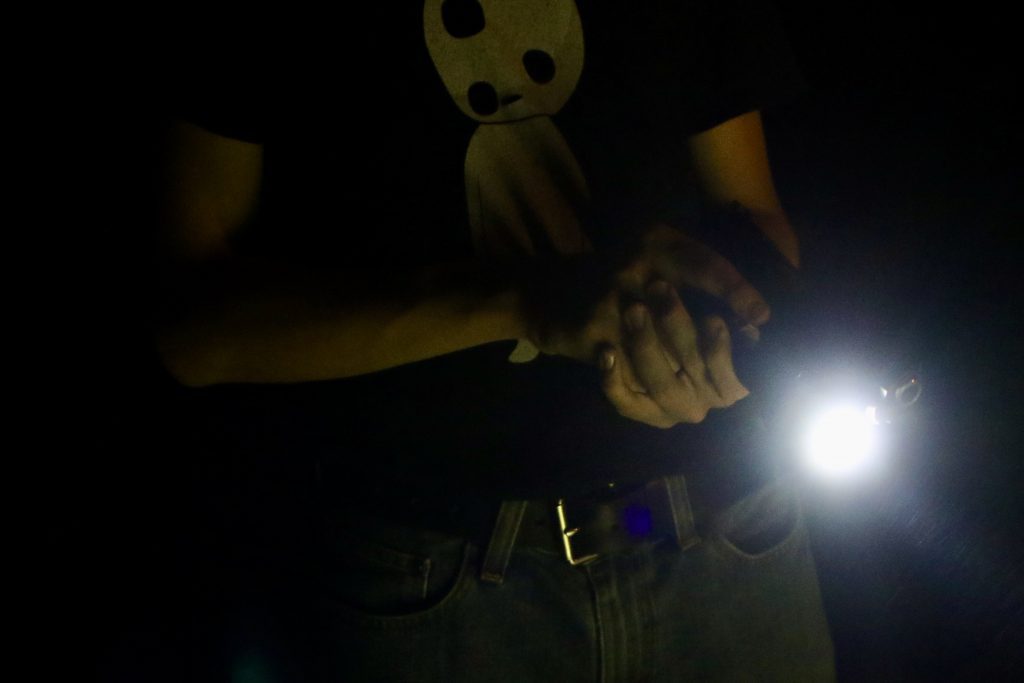 How would it ever make me a target? I’d use it after orientating on my threat and having a general idea of where they are. The light acts as a means to confirm what I likely already know. It doesn’t turn me into a target. As a defensive shooter, I have to react to offensive action, so I’m already a target in this situation.

We are beyond the old days of shooting wildly in the dark, hoping to hit a threat. I’m not planning to shoot at a silhouette that might be highlighting themselves and just hoping it’s the bad guy.

Real life isn’t going to have me play some cat and mouse game with a bad guy where we stumble around in the dark trying to shoot each other like a bad 80s thriller.

I don’t think everyone needs to carry a weapon-mounted light. It’s certainly situationally dependent on where you live and what you do. If you’re on the night shift or work in an environment that doesn’t get much sun, then it can be a very valuable tool to have, but even then, it’s not necessary. I would say having some form of light is a great idea. A good handheld can be used for a multitude of situations and is much more versatile than a WML.

What is necessary is training on how to use a WML. How to bounce light, understanding when to use the light, when to use your handheld, etc. We didn’t touch much on training, but it’s worth having.

Regardless, as an average joe, I’m having a hard time envisioning a situation where my WML would make me a target. As long as I have a little common sense and use the light only when necessary, I’m not turning myself into a B-8.

Bullpup PCC Options: Get Your Shorty On

The Blunderbuss and Thanksgiving