The California magazine ban violates the Second Amendment. So sayeth the Ninth Circuit of Appeals. Again.

But it is not yet legal to buy the banned mags!

According to our legal counsel, the stay currently (as of this writing) remains in place, but as soon as that lifts – which could be as soon as this afternoon or as late as…whenever – Californians should be able to start buying “large-capacity” mags again.

Counterintuitive as it might seem, as of this writing it is not yet legal to buy these magazines in California. A mandate has not been issued (as of this writing) from the 9th Circuit and the State of California can still take action in response — including asking for a re-hearing or petitioning SCOTUS.

Every competent legal authority we have contacted has affirmed that. Until the stay is lifted, the ban effectively remains in place!

We do not want our customers to get in a jam.

Daniel Shaw and Adam Kraut of the Firearms Policy Coalition will explain further in Episode 167 of The Mag Life Podcast (scroll down for that). Here’s the most important summation: 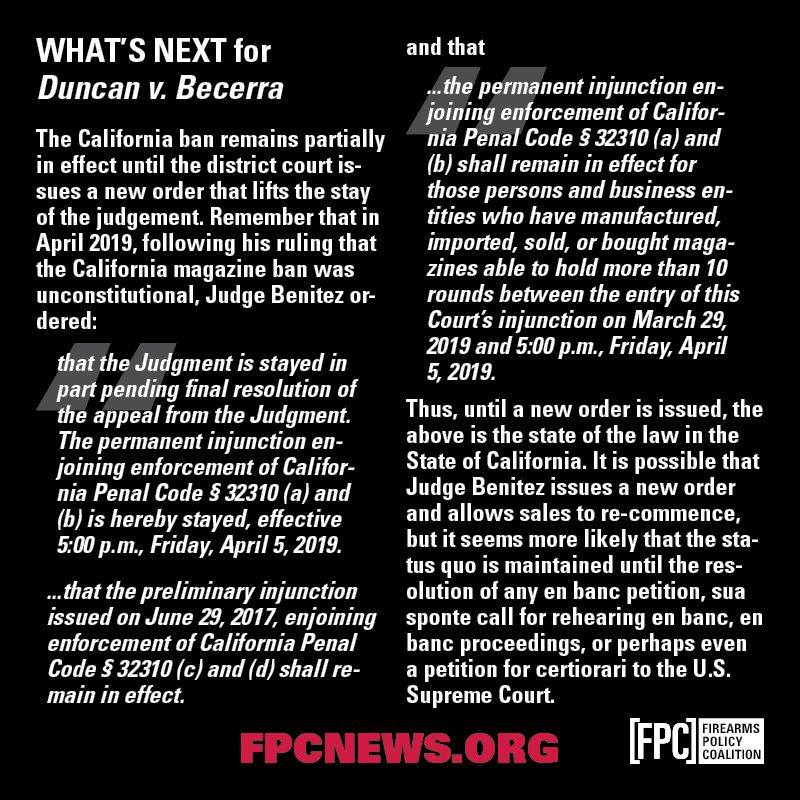 The ban was ill-advised and unconstitutional. The fact that Californians cannot yet buy the mags despite the 9th Circuit ruling, particularly given language like you’ll read below, is ridiculous. Stupid even. But that’s the way the legal system works and there’s no good reason to get yourself in a legal bind by getting ahead of the pace of events.

“…even the laudable goal of reducing gun violence must comply with the Constitution. California’s near-categorical ban of LCMs infringes on the fundamental right to self-defense. It criminalizes the possession of half of all magazines in America today. It makes unlawful magazines that are commonly used in handguns by law-abiding citizens for self-defense. And it substantially burdens the core right of self-defense guaranteed to the people under the Second Amendment. It cannot stand.”

LCM is the acronym used for large capacity magazine, the term used in this case in reference to magazines banned by California Government Code § 31310.

You may recall the previous ruling against the Proposition 63 law, wherein Judge Robert Benitez wrote in part,

“[H]undreds of thousands, if not millions, of otherwise law-abiding citizens will have an untenable choice: become an outlaw or dispossess one’s self of lawfully acquired property.”

Once again, this is not something we expected from the Ninth Circuit, but we’re happy to have it!

Give it a listen!

⚠️ Apologies in advance! In places, the sound quality is less than perfect because of our connection. Because of the urgent nature of this episode’s contents, we decided to push through and publish anyway. If you have any questions about what you hear (or don’t), hit us up in the comments!

Adam Kraut, FPC Director of Legal Strategy, sums up the decision pretty well when he says,

“We are thrilled to see a well-reasoned opinion that protects Second Amendment rights coming out of the Ninth Circuit. All too often judges apply their policy preferences rather than look at the text of the Constitution itself. Millions of Californians will soon be able to defend their hearth and home without having to handicap their ability to do so by using a magazine arbitrarily limited to holding a mere ten rounds of ammunition.”

Today (as of this writing, 8-14-20) a panel of three 9th Circuit judges ruled for the plaintiffs in the case of Duncan v Becerra.

On the Second Amendment claim, the court rested its extensive decision on three independent holdings. First, it concluded that section 32310 did not satisfy the “simple Heller test,” which queries whether the firearm or firearm component is commonly owned by law-abiding citizens for lawful purposes. Central to the court’s analysis were separate reports by two expert witnesses, James Curcuruto and Stephen Helsley. The Curcuruto report concluded that “[t]here are at least one hundred million magazines of a capacity of more than ten rounds in possession of American citizens, commonly used for various lawful purposes.”

The Helsley report echoed Curcuruto’s findings, noting that after four decades of sales, “millions of semiautomatic pistols with a magazine capacity of more than ten rounds and likely multiple millions of magazines” are in circulation in the United States. The court thus found that “[m]illions of ammunition magazines able to hold more than 10 rounds are in common use by law-abiding responsible citizens for lawful uses like self-defense.”