I should add that I’m not one that owns a safe full of bolt guns. Right now, I only own one. And this is it.  It is a Ruger American Rifle in .308. This is the Predator model. It is compact, light, and the materials of construction make it damned near indestructible.

All three of those aspects are important. I live in the South. I hunt in dense woods with limited sight distances. I never see more than 300 yards (unless I’m on the range). I typically hunt at distances less than 150 yards. So there’s no real need for a longer barrel. That said, I’ve seen a capable shooter connect at 1,000 yards with a Predator in 6.5 Creedmore, so the gun is capable.

The .308 is overkill for whitetail, arguably, but I am a fan of the .308. While others have moved to smaller, faster (and even flatter shooting) rounds, I’m sticking with what I know. The .308 offers a wide variety of bullet shapes and designs, and powder loads, so it is easy to find a round that the rifle likes. 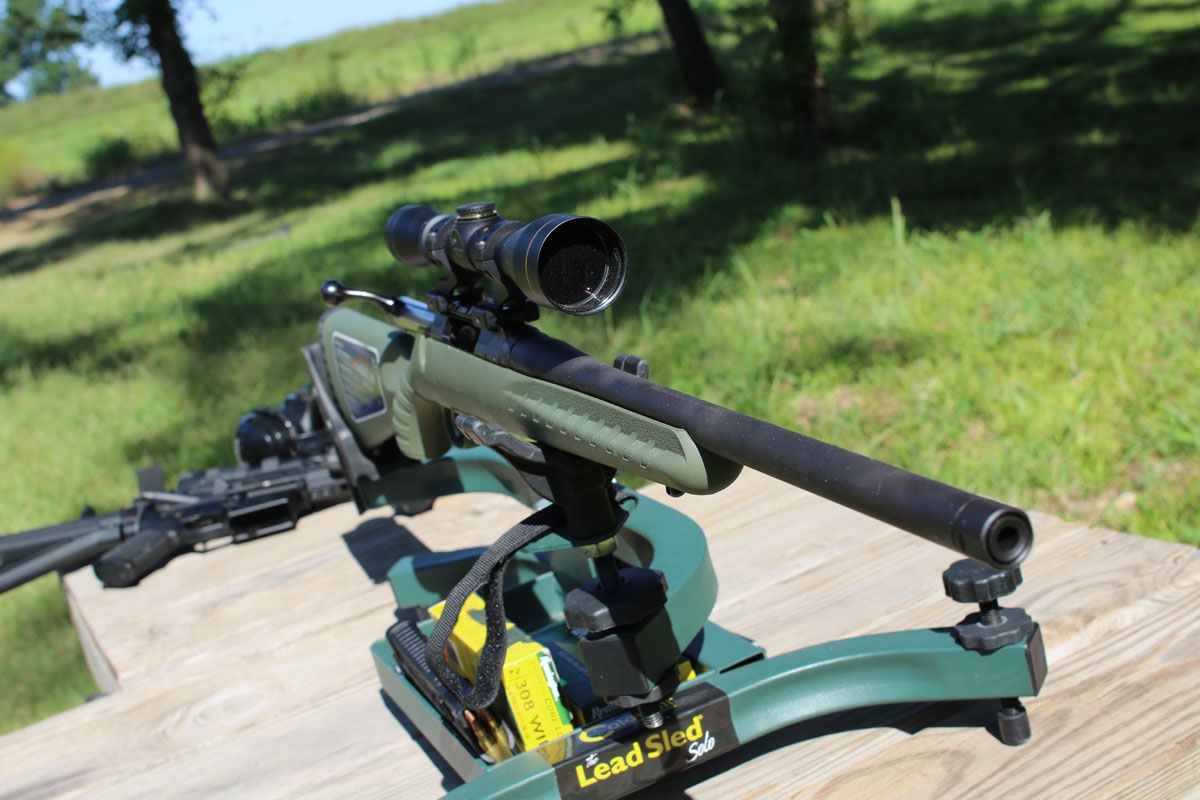 Ruger introduced the American Rifle several years ago. At first it was a basic black polymer-stocked rifle. The gun was incredibly affordable for the performance it offered. The price tag on the American Rifle helped make it popular, too.

Then Ruger made improvements and added options. This one comes with a picatinny rail. Most Rugers do not. The pic rail makes it much more versatile. Instead of working with Ruger’s more limited selection of proprietary scope rings, I had the choice of countless designs. I’m partial to a scope mount that allows me to see under the scope, so this was a plus.

The other big addition is the threaded barrel. I’m one of those yokels who thinks every gun should be silenced. Suppressors should be sold like accessories, not like firearms. When they are, or maybe before, this will have a can on the end. 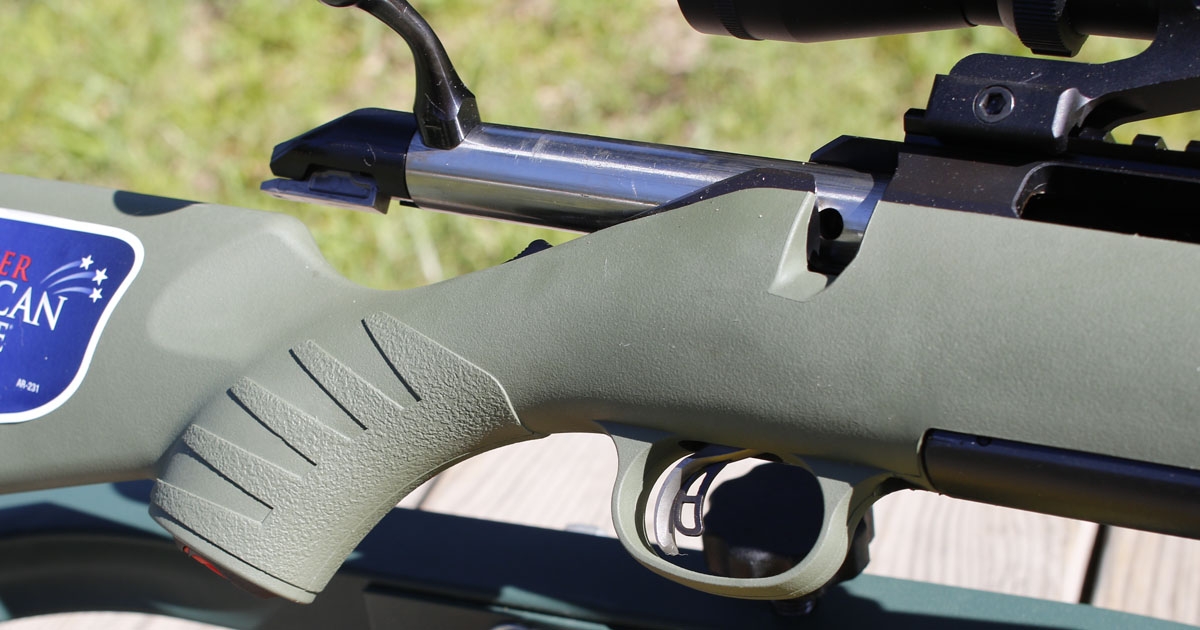 Not that the deer mind. They rarely hear the shot that kills them. Everyone else in the woods, though. The other deer. The other hunters. My ears. I could go on and on.

As for the construction, what you get from Ruger is always solid. Their plastic work is flawless. Their barrels are consistent. The 18” barrel on this one is tapered, but thicker than the one on my original American Rifle (with a 22” barrel). This isn’t a rifle that’s designed to be fired repeatedly, so heat build up is less of a problem, yet the gun remains light without feeling fragile.

The barrel is free-floated, which is important for a bolt gun. Ruger describes their patent-pending bedding system as Power Bedding. It is an integral block that requires less fitting, but is still exact. Engineering is hardly my strong suit, but I understand how it feels. The stock feels secure, even in the forend where it floats. 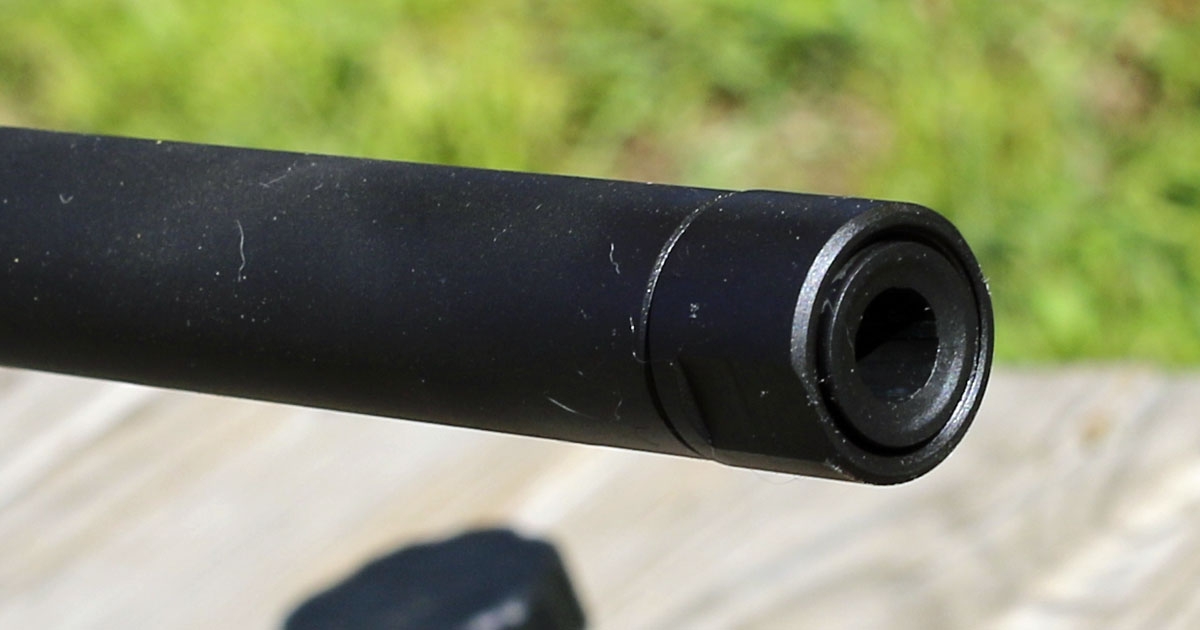 The bolt on this is a one piece, 3 lug design with a 70 degree throw. Even with larger scopes, there’s plenty of room for fast cycling from the shoulder (if you should require a follow-up shot).

The trigger is adjustable from 3 to 5 pounds. It has a clean travel and a decent break. Ruger factory triggers are consistently good, and this one is no exception. They stepped up their trigger game a few years back with their match triggers for the 10/22, and all of their rifle triggers seem to have benefitted. 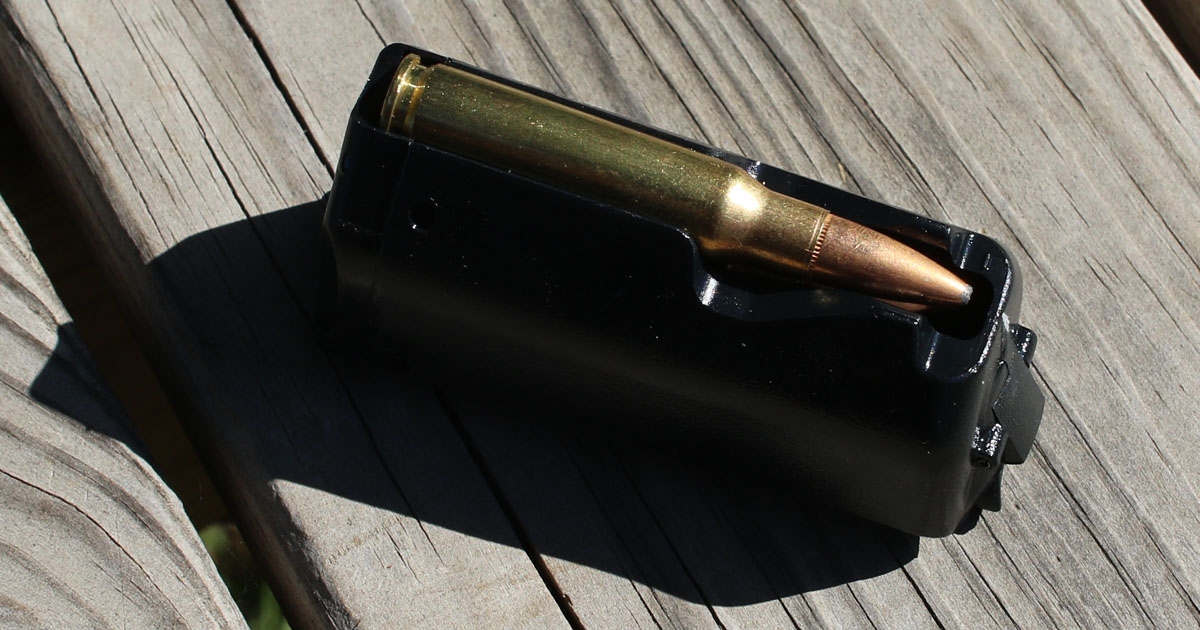 The rotary magazine is built of polymer. I’d highly suggest getting a spare (or two) to take with you in the woods. This is a bolt gun, though, and it can be loaded by hand if you have to (though it isn’t easy to get a round in from the top). Still, when a magazine goes south, it is good to have a spare on hand.

The safeties on the American rifles work in two ways. The first is a trigger safety. While they’re not foolproof, having a lever to depress inside the trigger shoe helps add another layer protection. Put your finger on the trigger, though, and the lever falls easily, then the trigger is free to move.

The tang-mounted safety is ideally placed. Most of us have experience with cross-bolt safeties. I wish I knew how many times I’ve missed a shot because I pulled the trigger with the safety on, only to have to look again. The tang-mounted safety is visible in your peripheral vision as you look through most scopes. And you can move it with your thumb, very easily. It is smooth, and makes no noise.

So how does it shoot? That’s the important part, right?

Ruger advertises minute of angle accuracy from the American Rifle. I’ve not been disappointed. With the right ammo, and a bit of patience (and maybe the help of a good bench rest), The Predator will group well. I shot three rounds through one ragger hole at 100 yards with a Leupold 3-9 x 40 on top (from a rest). The three shots above are from the shoulder.

The MOA test is a good benchmark, but I’m far more concerned with how it runs from the shoulder or the deer stand, where I only ever get one shot. That’s what this rifle is built for.

The Predator doesn’t offer many of the adjustments some rifle stocks offer. The cheek piece isn’t as high as I’d like. The length of pull is fixed. For someone like me, at 6’4”, that is something I have to live with. 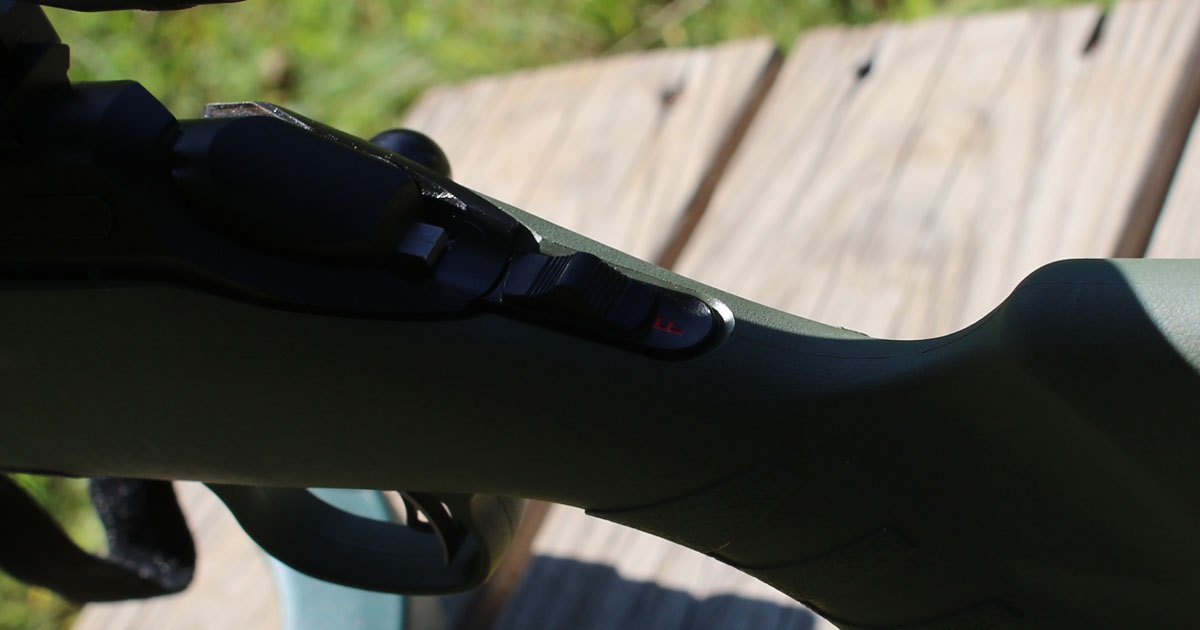 Everything else works as it should. I’m always pleased when I sight in at 100 and punch one clean hole, and dial it in at 300 and drop a round right where I want. That’s why the Ruger is in the safe.

Prices on the Predators begin at $529. Keep in mind that’s the MSRP. They are available for less off the shelf at your FFL–much less now that the fall season is behind us. 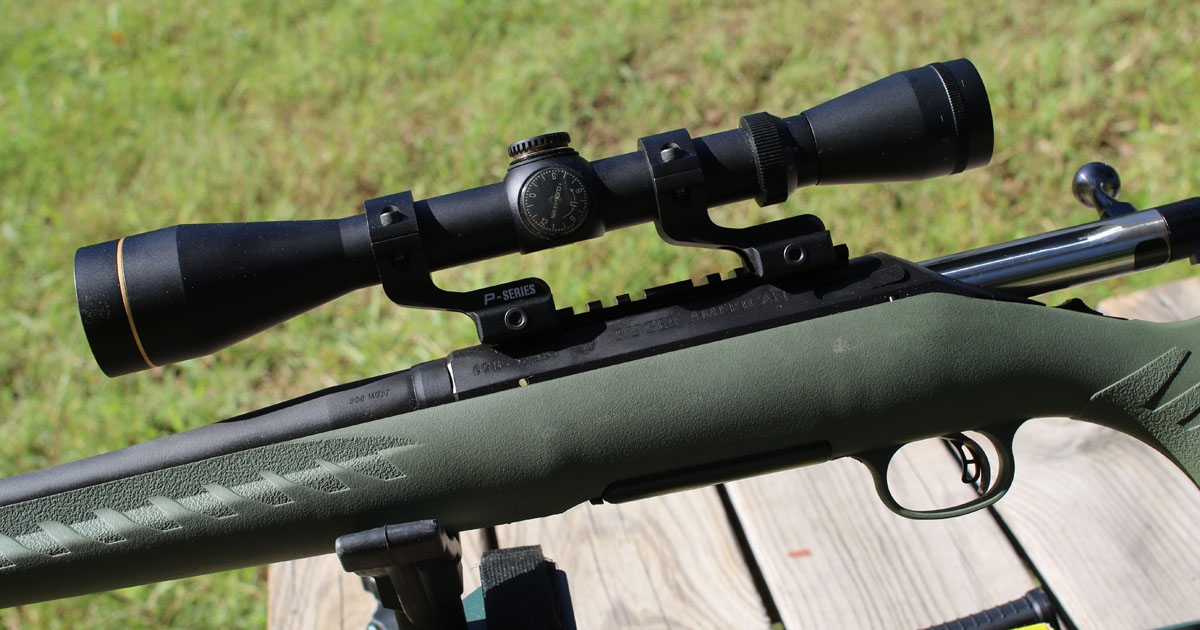 Like many of the other guns in this class, the American Rifles are made in the states. I’ve been to the Mayodan, N.C. plant where these are made. I’ve walked through their assembly lines and seen the guns being made and tested. I’ve been to many factories, and Ruger’s use of the Toyota assembly line model is inspiring.

For me, the choice was simple. I wanted a gun that was compact, but capable of reaching out. I needed a gun that was light and rugged. I wanted to be able to use any scope mount I wanted and to silence it without having to have the barrel threaded. And I didn’t want to pay too much for all of those demands. The Predator was it.

2 thoughts on “Best Bang for your Buck? The Ruger Predator”