Pistol caliber carbines have been around for a long time. Cowboys of the old west would sometimes carry revolvers and lever guns in the same caliber. Often this was done for compatibility purposes. Not only did you want to keep your load light when out in the field, there also wasn’t a Walmart on every corner where you could wander in and pick up two or three different loads whenever you liked.

Personally, I’ve been fascinated by pistol caliber carbines ever since I learned as a child cartridges like a .38 Special can be fired from a rifle. As I’ve advanced through life, my firearms interests have sometimes changed, but I’ve always retained my attraction to the pistol caliber carbine.

Today, it seems, there are many other people who also share that same attraction. I’ve seen a lot of 9mm carbines at the range in recent months. Most have been AR-style rifles, but I’ve also seen examples from Beretta and Kel-Tec. However, one of the the most interesting 9mm rifles I’ve had a chance to shoot comes from Sig Sauer.

Sig Sauer makes a lot of different products. Many of its legacy guns are considered perfect examples of precision engineering from the blended German and Swiss company. Today, the company makes a very diverse range of products for the shooting community: everything from rangefinders and optics to hunting ammunition. At its core, however, the company is still building precision guns. The MPX is an excellent example of this.

Just looking at the gun, you can immediately surmise that this is not just another 9mm AR clone. While there are some elements that are similar to the AR series of rifles, the gun is of a completely different design.

The operating system is one of the most obvious differences between ARs and the Sig MPX.

Sig uses a short-stroke piston system with a rotary bolt. This has the advantage of running cooler and cleaner than a gas impingement system that is used with rifle cartridges in the AR. However, most 9mm AR rifles use a direct blowback system. Blowback is simple, but it increases the amount of force hitting your shoulder each time the gun recoils. Also, a blowback system requires something heavy — typically a heavy buffer in an AR — to counteract that rearward force.

By using a short-stroke piston system, SIG ensures that the gun will have a much softer recoil than nearly any 9mm AR rifle. While you might not think that a 9mm rifle has much recoil, it can be surprisingly forceful with a blowback design.

Sig designed the bolt carriage assembly with a dual recoil spring system. This allows the gun to function without the need for a buffer tube assembly. Consequently, Sig can use all kinds of stocks on this rifle without having to work around the receiver extension. Folding stocks are no problem for this gun. As it shipped to me, the gun I tested had a PDW-style stock that collapses down to a very compact form.

Like an AR, the bolt and carriage can be accessed by pushing out the takedown pin. This allows the upper to hinge open for cleaning and inspection. If you want to completely remove the upper, push out the pivot pin and the halves separate.

One of the interesting features of this gun is how easy it is to replace the handguard. When you separate the upper from the lower, the handguard can then slip straight off the front of the assembly. If you want to go even farther, a pair of Torx screws are the only things holding the barrel in place. Remove those and you can slip the barrel right off. There is an index pin in the 6 o’clock position that allows you to properly align the barrel for reinstallation.

Included are two Sig MPX 30-round magazines. These are high-quality magazines that are made for Sig by Lancer. I highly recommend picking up at least three more. This is an expensive gun, but the magazines are relatively inexpensive. Good mags are crucial to keep the gun running, and you don’t want to be caught with a poorly shaped club because you failed to purchase additional magazines.

As I previously mentioned, there are elements of this gun that are similar to the AR platform. The controls, for example, will be very familiar to anyone with experience running the AR-15 or M-16 platforms.

While the two designs are different, there is some compatibility between the AR and MPX rifle parts. For example, you can replace the stock pistol grip with any standard AR pistol grip. During my testing time, I confirmed this by putting both a Magpul MOE grip and a Tyrant Designs pistol grip on the gun.

A word of caution about swapping grips:

Due to a difference in the design of the two guns, there is an extra spring that is held captive by the pistol grip. So, when removing the factory grip, be careful not to lose it.

Additionally, you have to use caution when fitting the new grip. You do not want to kink that second spring. (For AR builders, the “extra” spring is actually the takedown pin detent spring. Since the Sig MPX does not have a buffer tube assembly, the spring was relocated.)

The fire control group looks to be compatible.

However, Sig Sauer recommends against using any kind of replacement that was designed for the AR. I’ve seen reports online that an AR replacement will work, but I am unwilling to go against the manufacturer’s recommendations on such a critical component. Geissele Automatics states it is working on a replacement MPX trigger. Based on Geissele’s other products, I look forward to trying this out when it is available.

The Sig MPX — On the Range

The MPX is one of the sweetest shooting 9mm rifles that I’ve had a chance to shoot. Due to the gas system, the gun has less rearward push than blowback rifles. The gun’s weight also helps to reduce recoil and muzzle rise. The result is a very easy shooting gun that is easy to keep on target for multiple rapid shots. 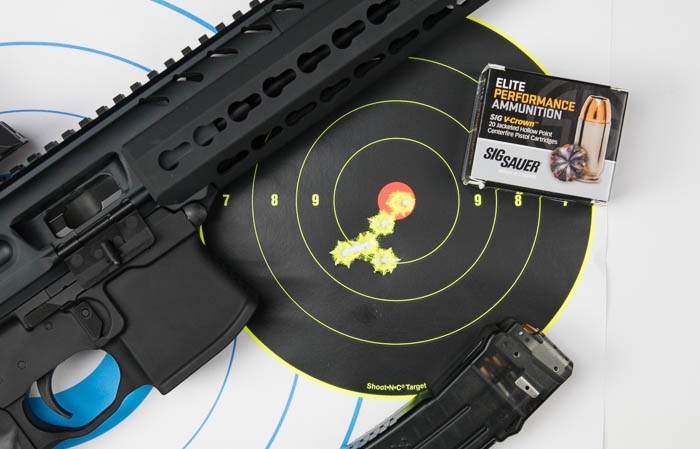 I found the gun was accurate at various ranges to 50 yards. The included iron sights were good enough to keep rounds in the important parts during shooting drills. However, I would imagine most people will want to add a red dot sight to the gun. I tried several different kinds on the Sig and found they all seemed to work very well with the rifle.

The bottom line on this gun: it is not cheap, but it is at the top of the pack for 9mm carbines. If you want one of the best 9mm rifles on the market, I recommend starting your search with this one.

The Norinco 97 | A Ramen Noodle Take on Winchester