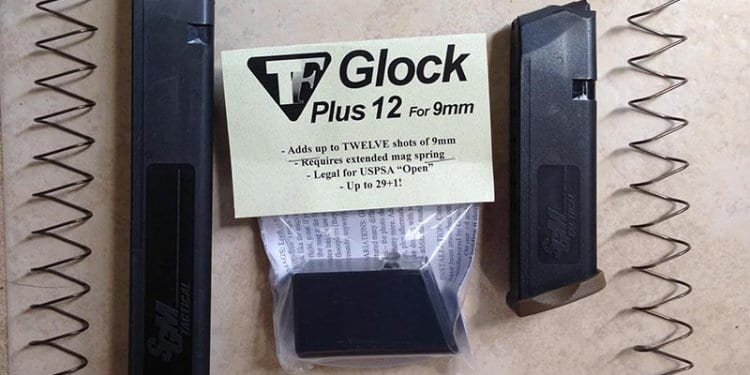 In the competitive shooting world, and in some cases the defensive training world, many people uses extensions on their Glock magazines. The added benefit is obviously more ammo without having to reload. Other added benefits include adding a bumper to insert the mag if you have a mag well on your Glock grip. Most people are aware of the Glock 17rd magazine and the 32rd extended magazine.

Well, in the world of competition, magazine size is strictly regulated. In Production class you can only use factory magazines loaded to 10 rounds. In Limited division you can use magazines up to 140mm in length. And in open division you can use magazines as long as 170mm in length. Unfortunately, the extended 32 round Glock magazine is not allowed in many competitions. However, with the onset of the Pistol Caliber Carbine division in USPSA, the provisional rules do not limit the size of the magazines. This is simply due to the wide variety of pistol caliber carbines like the MP5, MPX, Sterling MK4 etc. that have long 30+ round magazines.

If the USPSA doesn’t rule on this then an extended 30rd Glock magazine can be further extended an additional 12 rounds. Introducing the Taylor Freelance +12rd extension. Using the Taylor Freelance +12 extension on a standard 17rd Glock magazine makes it 29 rounds and stays in the 170mm size constraint for open division. Here is the 29rd extended Glock mag next to a 30rd SGM Tactical magazine. One issue I discovered with the 29rd magazine is that the Taylor Freelance extension hits my ALG Defense mag well and the magazine will not seat properly in the Glock 17. However I did not get the Taylor Freelance extension for shooting my Glock handgun. I got it to feed my Kel-Tec Sub2000 Gen 2.