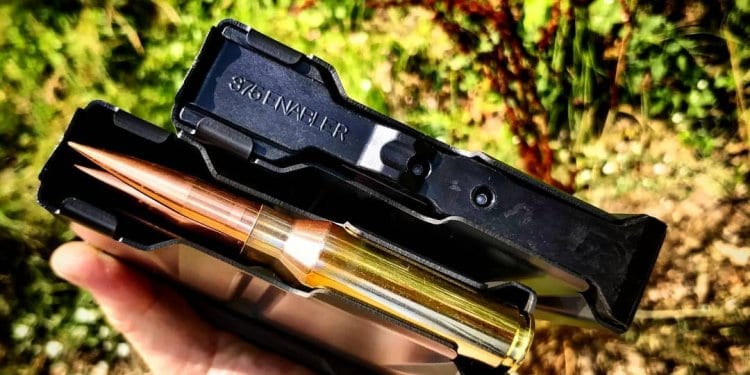 It isn’t just any cartridge (or for that matter shooter or weapon platform) that can handle the sort of precision shooting that happens during an ELR match. One of those that can is the Applied Ballistics EnABELR round.

Who doesn’t like pushing their limits with a firearm? There is no better way to test your gun handling and familiarity with (your) firearms than competitive shooting. The surprising star of competitive shooting disciplines in recent years has consistently been Precision Rifle. It seems the schedules for both NRL and PRS double in size each year with more and more matches becoming available to shooters.

Moving past the more practical style of the PRS/NRL, another discipline that seems to be gaining traction is the world of Extreme Long-Range (ELR). This upsurge in extreme distance shooting is led by a competition called the “King of 2 Mile”.

Which brings us to the EnABELR.

Earlier this year AB announced EnABELR release with a substantial amount of documentation and development methodologies to explain how and why it was designed. The EnABELR was developed by Mitch Fitzpatrick and Bryan Litz to be a “…reliable performance, low maintenance, ‘shoot all day cartridge”. The round uses the 379 gr Berger and 407 gr Solid bullets to provide a “…moderate capacity round with highly effective performance, proven at ranges of over two miles.”

“…there are larger cartridges that make more velocity, but they’re also higher maintenance and less predictable. The EnABELR was developed to provide practical, long term, reliable performance for ELR applications for many shots, making your brass investment take you further across more rounds.

What we’ve learned competing in ELR [Extreme Long Range] matches in recent years is that the value in consistent and reliable performance is more important than the extra +100 fps of a higher maintenance cartridge. These lessons are incorporated in the EnABELR design.”

So what does this mean, and why should you care? 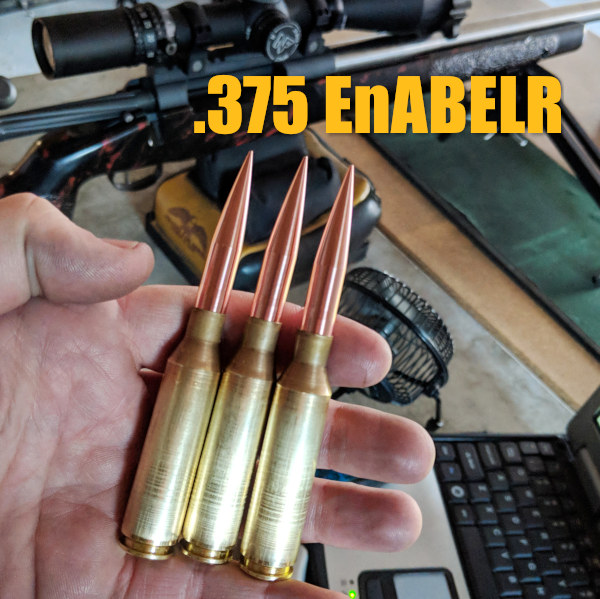 These types of competition a bullet like this is meant for is one that demands an intimate familiarity with the shooter’s weapon and ammunition. It demands an ability to judge environment out to upwards of 2,500 meters for consistently successful target engagement, and militates the use of huge, high Ballistic Coefficient (BC) projectiles traveling at Ludicrous Speed – such as the EnABELR and others like it.

ELR competitions are filed with single shot rifles shooting high maintenance cartridges and extremely limit people’s ability to engage in the sport without spending a small fortune and custom loading ammunition. Applied Ballistics (AB) and Bryan Litz set out to design a cartridge that could be more user friendly and open the sport up to a broader audience.

The key to long range accuracy is consistency. Consistency in shooting ability, and fundamentals applied by the shooter but even more so by the ammunition and weapon platform. To accomplish this at the distances required in these competitions, many of the cartridges used are developed around weapons originally used to shoot .50 BMG or similar size.

Calibers normally seen are between .338 and .50 and with modern bullet design and development, multiple companies have developed high BC bullets for this exact purpose. The problem with many of these bullets is the length required to accomplish the high BC. This length makes it hard, if not impossible to load into a magazine and require the guns to be single shot. This isn’t a terrible problem for many competition shooters but not ideal for any transfer to a military application. Other problems commonly found in these weapons are extremely high chamber pressure and very short barrel life. These cartridge foul very quickly and can cause a serious problem with velocity migration.

This migration in muzzle velocity due to extreme bore fouling is caused by the amount of powder required to get the speeds necessary for extended supersonic flight. Variation of 10-20 feet per second may be acceptable for factory ammunition and for a few hundred yards but at long range it can mean a miss that otherwise would have hit. With many popular rounds used, shooters must clean the rifles frequently to limit this variable. These pressures are also hard on brass. Many of these cartridges require a lengthy multi-step process of brass prep and fire forming to make the brass and then can only be used for a couple firings before needing to be scrapped. AB has been a major player in this arena since 2009. Team AB regularly competes in these competitions and seeing these problems, Bryan Litz and Mitch Fitzpatrick set out to develop a cartridge that could be used in ELR yet minimize many of the draw backs of currently fielded cartridges.

AB started with all of these perceived downsides and looked to design a cartridge capable of use in these competitions with many of the benefits of more “factory”-esque smaller cartridges. AB started with using the popular 375 CheyTac as a performance benchmark but loading more current high BC bullets available from Berger (379 gr. Solid, 407 gr. Solid). 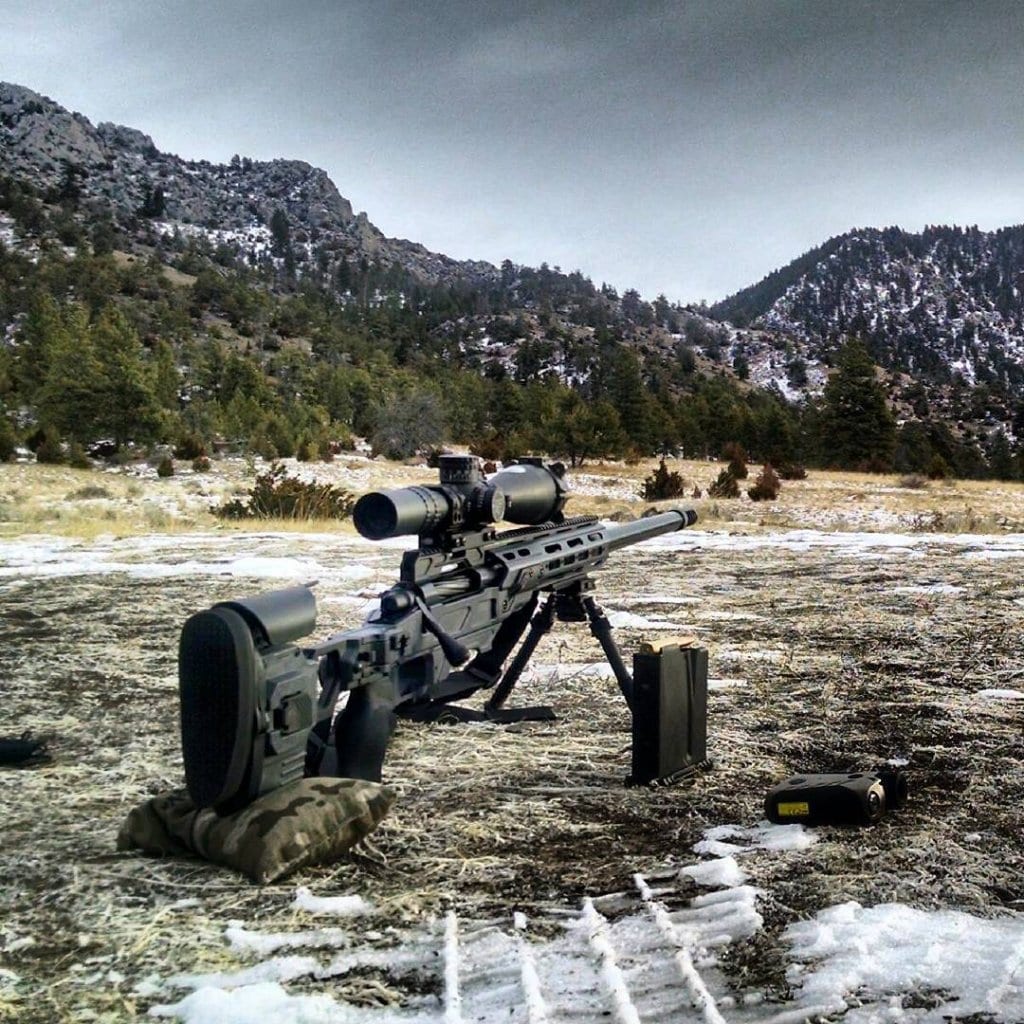 When these bullets are typically loaded in the 375 CheyTac the rounds are not magazine feed-able. AB then shortened the case design while increasing diameter to keep similar case capacity and arrive at a case design very similar to that of the 338 Norma Magnum. This gives a similar list of advantages over the longer 338 Lapua Magnum. While it may not be quite as fast, it is not as hard on brass or barrels either.

This may not be a huge issue to some shooters, but for some it can be a make or break factor.

Most of the discussion so far has been on the 375 caliber variant of the EnABELR.  During the course of development, we recognized that a natural extension of this cartridge is to neck it down to .338 caliber.  This makes a cartridge that is very comparable to a scaled up 300 Norma Mag, which enjoys legendary status for being a high performance, inherently accurate cartridge design and was selected by SOCOM for the Advanced Sniper Rifle (http://soldiersystems.net/2018/05/07/ussocom-releases-advanced-sniper-rifle-solicitation/ ).  In the same way that the 375 EnABELR is a big brother to the highly successful 338 Norma Mag, the 338 EnABELR is big brother to the highly successful, although more aggressively performing 300 Norma Mag.  – Applied Ballistics

According to Applied Ballistics, the EnABELR makes the following in a 30 in. barrel (as measured by Doppler radar). 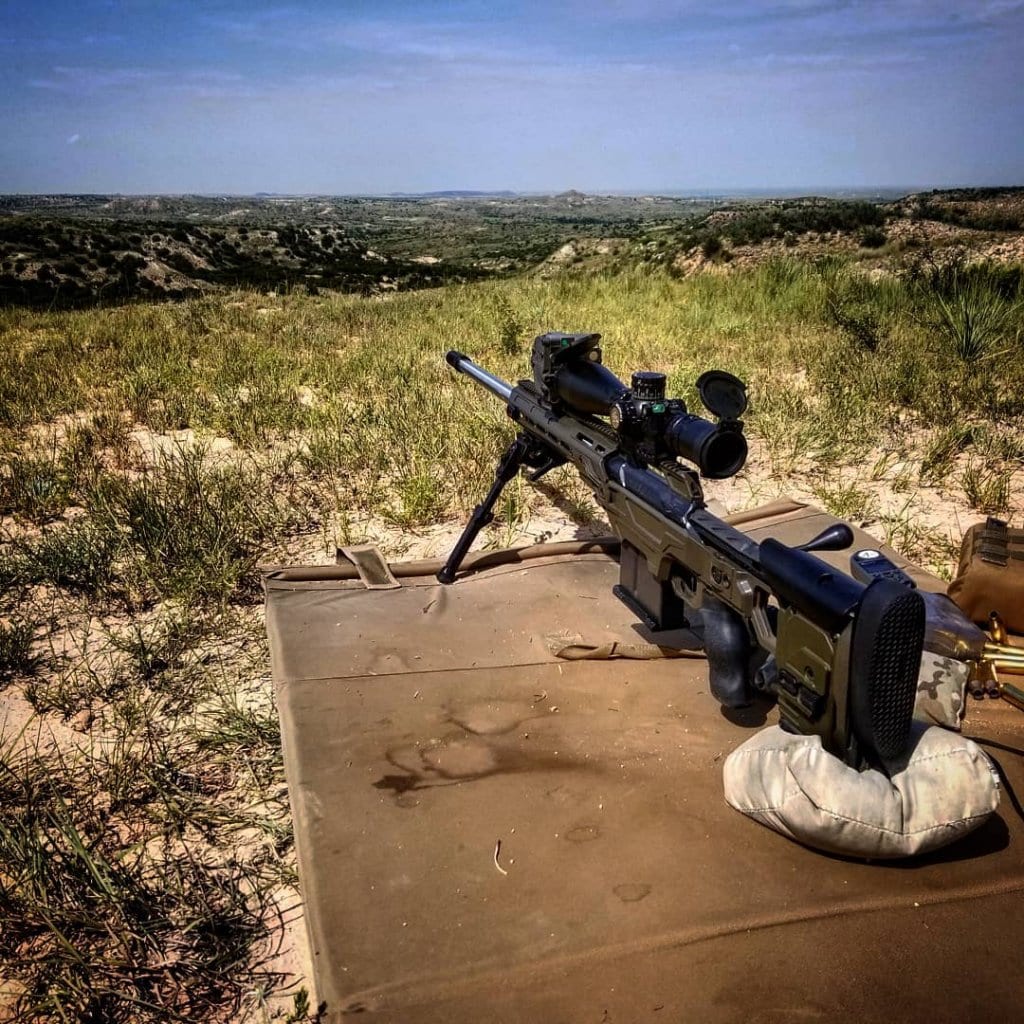 Nobody will tell you that this type of shooting is inexpensive. In fact, it requires a fairly hefty initial investment. For those without a lot of time to dedicate, this round provides and “off the shelf” gun purchase option. Peterson Cartridge Company has brass that is ready to load, ABWD has reloading dies, and of course there is factory ammunition available directly from AB.

AB also supplies starting load data, and custom drag models for the bullets to help with removing some of the guess work. I know for me personally and my experience shooting PRS, the availability of factory ammunition with consistent performance makes decisions to shoot matches much easier.

If you have ever thought about stepping up your long game and reaching out and touching some targets that are waaaaay out there, here is an option for you to consider. AB has done a lot of work to ensure that you’re set up to enjoy the sport with minimal excess work and cost.