When I worked behind the gun counter, selling guns, I often noticed how people gripped handguns. How they manipulate a handgun also tends to drive their decision on what handgun to purchase. Beginners are sometimes mislead or improperly instructed about the proper way to manipulate a handgun. Shooting a handgun well is not magic. Here are three advanced tips for people who want to cut out the learning curve and get a grip on their guns.

Let’s Start At The Very Beginning

A very good place to start. When you shoot a handgun you need to load it first. I have seen many people looking to buy their first handgun struggle with pulling the slide back. Racking the slide of a handgun is one of the most important skills to using one. Not only is it required for getting the handgun loaded, but you need to rack the slide back to fix any malfunctions. Handguns are machines; they can and will malfunction. Being able to comfortably and reliably cycle the slide is crucial.

This is where some people struggle. Pulling a slide back like this requires a lot of finger strength. You are using the sides of your index finger and thumb to pinch the slide and pull it back. This is not ergonomically efficient.  You are better off grasping the top of the slide with most of your hand. You are using the last three fingers and the meaty part of your palm just below your thumb. This area of your palm is also known as the thenar. You don’t even use your index finger or thumb at all. Now it is important to grasp the rear of the slide. Keep your fingers behind the ejection port. If the slide closes, your skin can get pinched. By grasping the slide in this manner, you are using a lot more skin to provide traction and it actually requires less effort to pull the slide back. 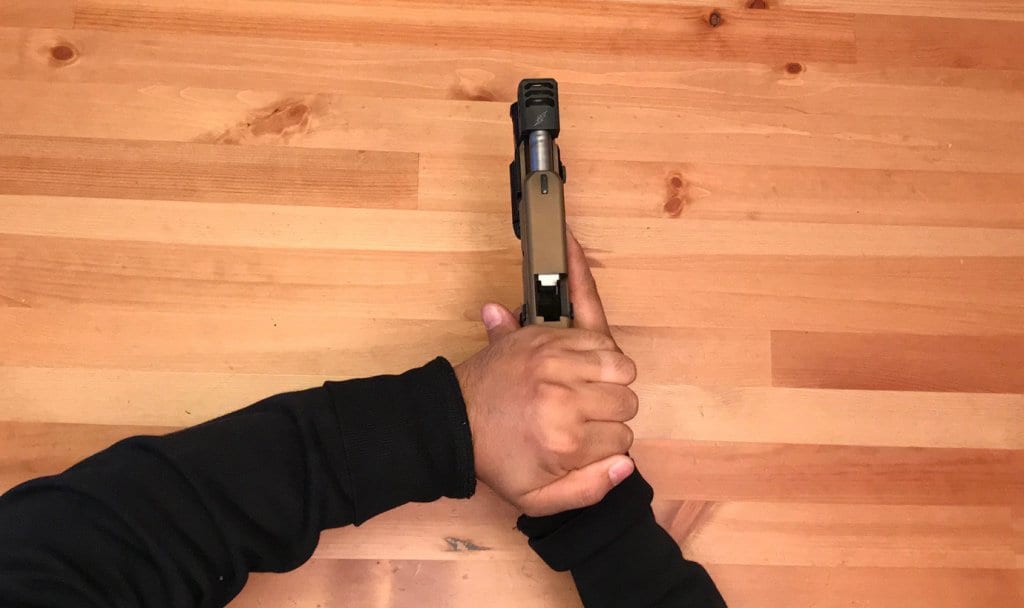 While this method is better for more advanced techniques like clearing stove pipes, some people still struggle with this. This is due to body mechanics. So rather than fighting the gun and slide, use your body smarter and work less. Position your arms so they push opposite of each other. When you do this, you need to pay attention to muzzle awareness. Know where the muzzle end of the gun is pointing. If at a range, keep it down range. Make sure you don’t point the gun at a part of your body. 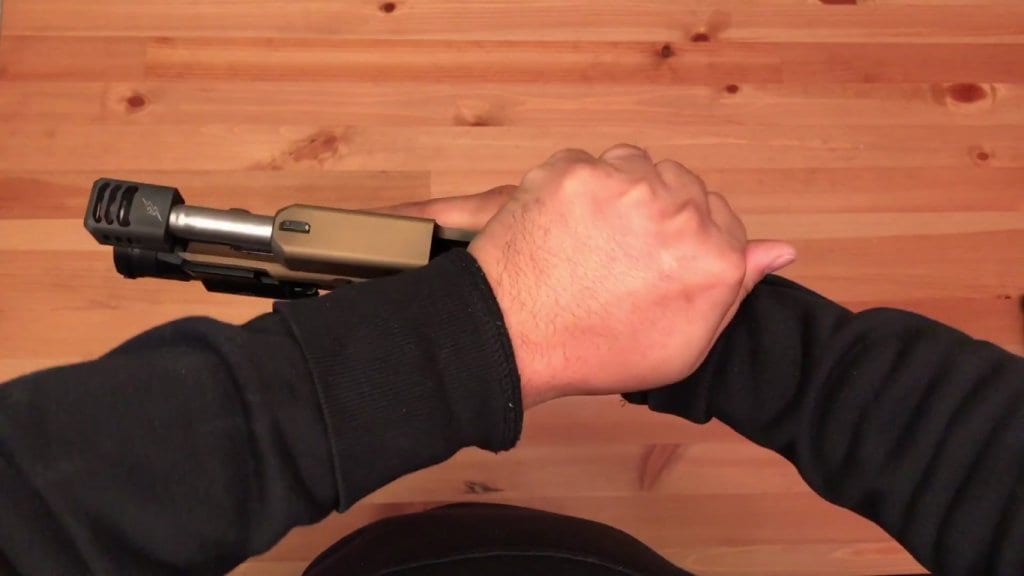 By positioning your arms opposite of each other, you will find it a lot easier to push the gun forward and pull the slide back.  This method divides the task into different muscles which makes the task much easier.

The next tip is how you hold the handgun when you shoot it. The way in which you grip your handgun does so many things to help you shoot. It helps you mitigate recoil and muzzle climb. It allows you to control the handgun. Not all grips are equal. Some are better than others and some are borderline dangerous.

The “teacup” grip is like a cup and saucer. The gun is a cup and your support hand (in this case my left hand) acts like a saucer. This grip is only good for holding up the handgun. It compensates for the weight of the gun but other than that, it does not help control the gun at all. 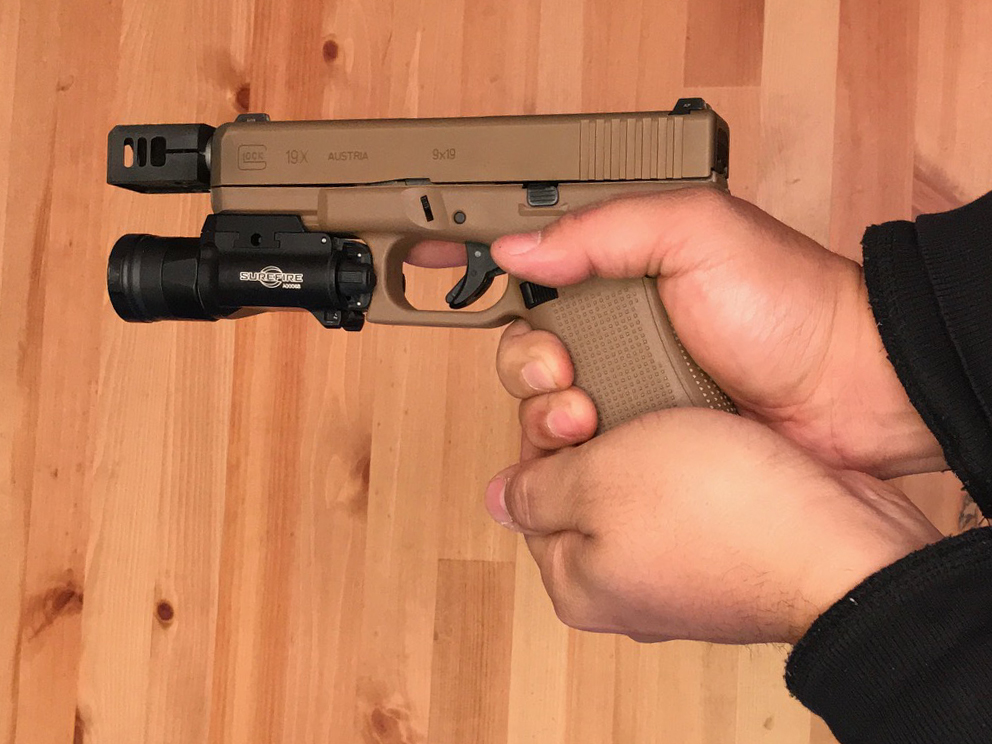 Some shooters do a little bit better with a grip like this. Where they attempt to hold onto the left side of the gun but this is not as good as it can be. Check out how both of these block access to the magazine well. 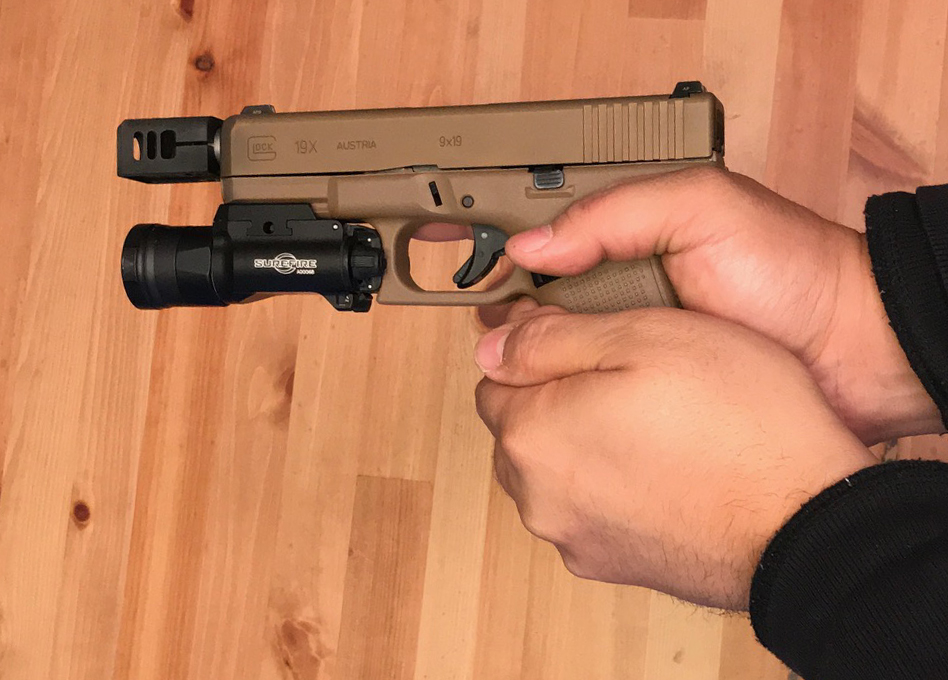 The wrap around thumb grip is an attempt to gain better control but this is inherently dangerous. You can use this style of grip on a revolver but for a semi automatic handgun you could get hurt doing this. The problem is that your thumb is directly behind the slide. When the gun shoots, the slide will cycle rearwards and you can get what is colloquially called “slide bite”. Do not place your thumb there. 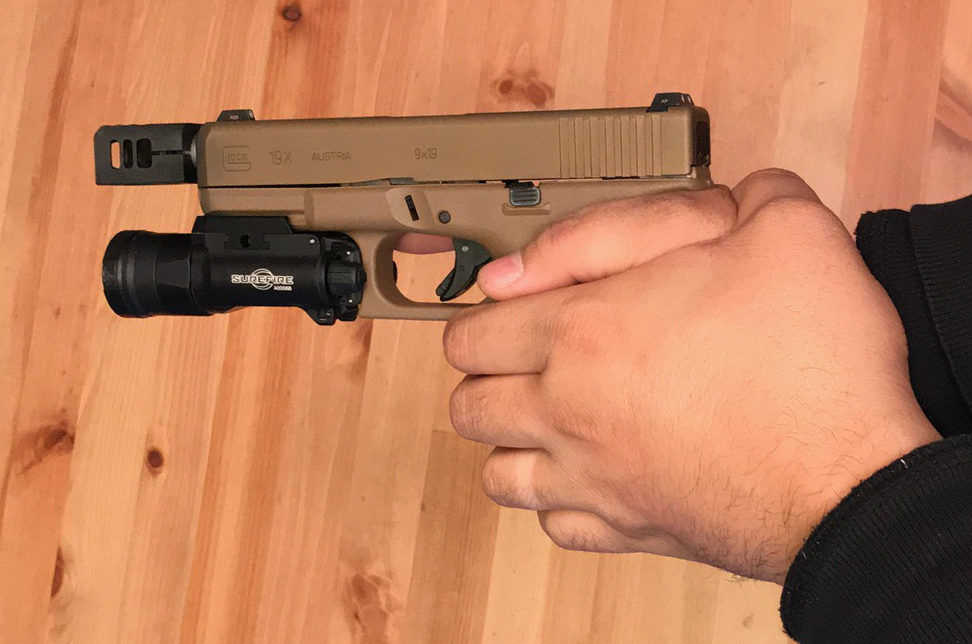 So where should you put your hand? Take a look at your firing hand as you grab a handgun. See how much of the grip it is holding onto? Do that with your left hand. 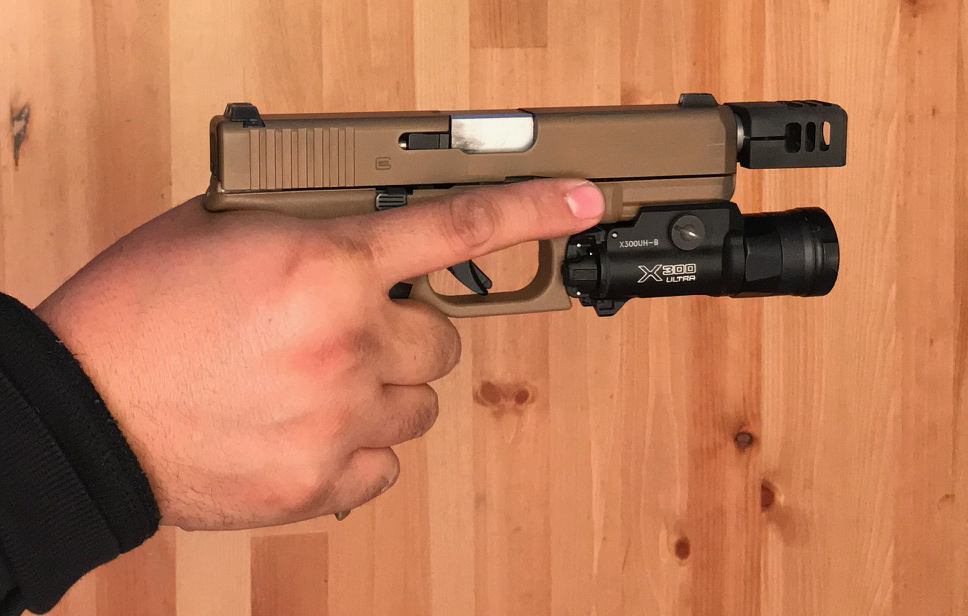 See the area I circled in blue (below)? That is a whole lot of gun that you should be engaging with your other hand. You want to get both hands as high up onto the gun as possible. As close to the slide as you can. See my thumb? See how high I have it? I get it out of the way. My thumb does not do nearly that much compared to what my left hand will do by filling in that gap. 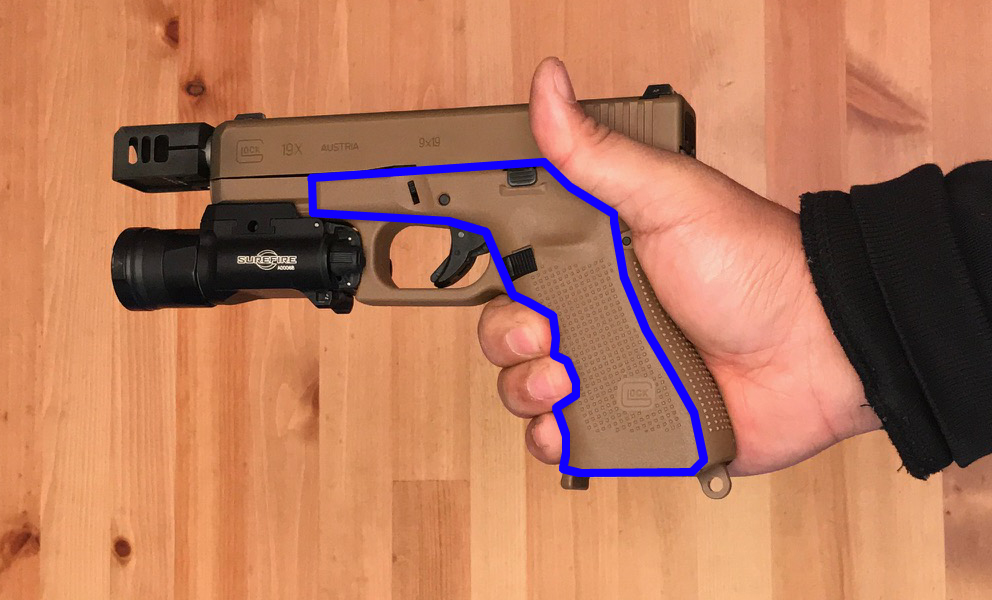 See my left hand and how high up it is? My left hand is positioned the same as if I had a knife and wanted to stab something with said knife. My right thumb is up and out of the way riding on top of my left thumb. 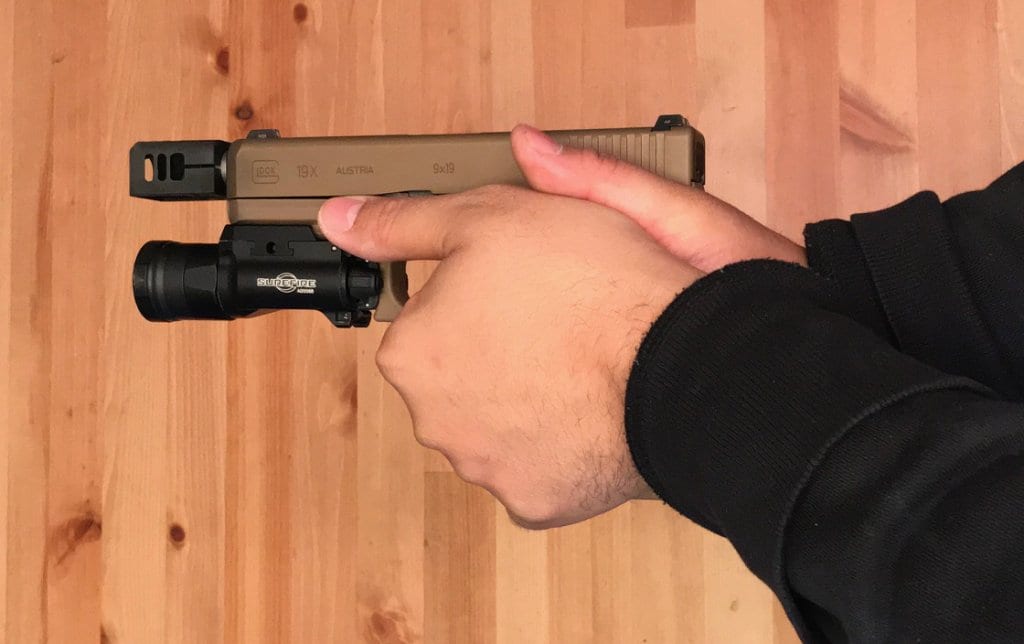 You want to get as much meat and bone around the gun as possible. The higher up you hold the gun, the more you control the gun. If I could wrap my hands over and around the gun I would but that would not be safe to do so and would inhibit the gun from shooting. This is as close as I can get to total control of the gun.

As an aside, this position allows the support hand (my left hand) to also do the difficult work of reloading. It is important to maintain the right hand’s grip though the magazine change, and to keep it high enough that the mag well isn’t obstructed.

Now What Do I Do With My Hands?

This last step is actually focusing on your arms. Just holding the gun up is not the end. The gun will kick back and jump up. It is just physics.  You need to mitigate this and my friend Paul Van Dunk has a very simple way of demonstrating this. 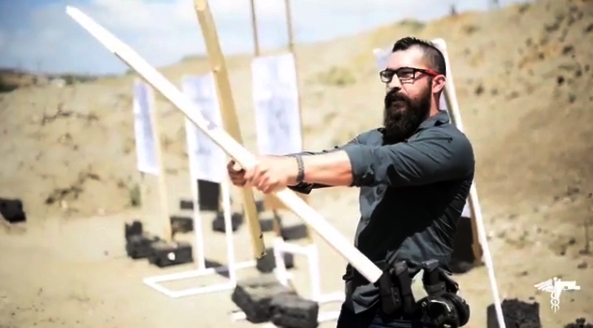 Imagine you are holding two sticks in your hands. Tilt the sticks forward and cross the sticks, making an X like you see above. You want to do that with your handgun. You are applying forward, downward and sideways pressure to the try and control the gun from kicking back and up.

With these advanced but simple tips to handgun shooting, you should be able to use most handguns. Don’t compensate by trying to find a pistol that is easier to rack. Also smaller does not mean easier to control. The problem is you are shooting the same caliber as a full size gun but now have less gun to control. They weigh less so recoil will be worse. Size of the handgun is dependent on many factors. One is concealment. If concealment is not a priority then go with the bigger gun. It will hold more ammo and be easier to control. Of course bigger does not mean bigger caliber. I mean a full size handgun like a Glock 17 not a sub compact like the Glock 26.

I hope you may have learned something from these 3 tips. Or maybe you know someone who could learn something from it. Let’s all share these techniques so we all become better and safer shooters. If you need to see the same information presented slightly differently, here is a video that may help.