Firearms’ history is full of weird guns. Some of my favorite listicles are all about weird guns, so I figured why not write one myself? I wanted to focus on weird guns I feel don’t get enough love or attention. These guns are a personal affront to my existence, but I hope they entertain you. Here are my favorite weird guns.

The Remington 870 is a classic pump-action shotgun used by generations of shooters for self-defense police and military work, and of course, sporting tasks of all types. This hardly qualifies as a weird gun. The 870 Competition defies tradition, as this is a gas-operated single shot gas gun.

Why would such an 870 exist? Why does a single shot need to be gas-operated? Well, the gun is designed explicitly for trapshooters. The gas system comes out a Remington 1100, and the goal was to reduce recoil. Semi-auto shotguns have hardly any recoil compared to a pump action. The 870 Competition model uses gas against a weight that unlocks the action.

High round count sporting events like trap and skeet are a real workout, and those ultra-weak trap loads exist for a reason. People don’t want to be beaten up by their shotgun. If the 870 competition feels like an 1100, why not just purchase an 1100? Well, the idea was that this would spare you from throwing shells at your teammates and other shooters.

It seems like a weird solution to produce for five years. But if they didn’t, we’d have one fewer gun on our weird gun list.

Magazine fed revolver isn’t something I say every day. We carry a ton of magazines here at GunMag Warehouse, but I can promise you we don’t carry these mostly because the internal magazine is not removable. The Dardick Revolver was a weird space-age gun that used weird space-age cartridges. 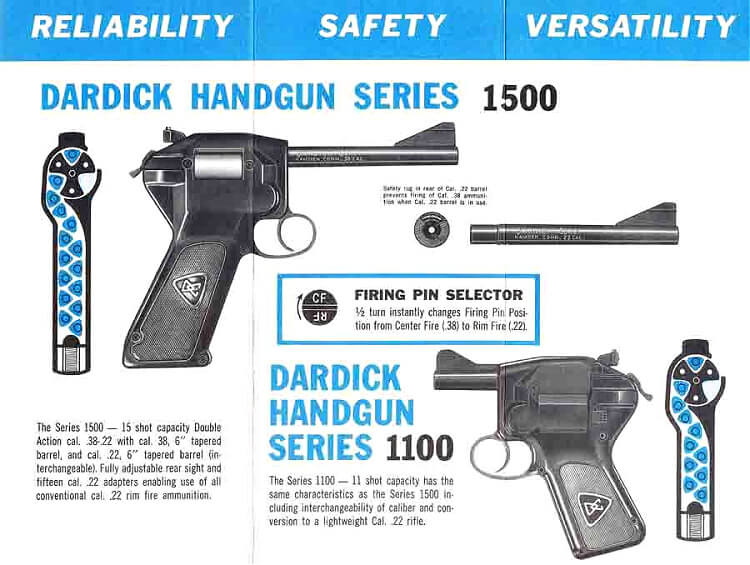 The trounds (triangular rounds) were triangular by design. The shape was necessary so the rotating cylinder could pick the rounds from the magazine. The round entered the first cylinder, rotated up into firing position, and then rotated into the third position where it dropped the empty shell.

The tround rounds were 38 caliber, and the guns came with an interchangeable barrel to convert the weapon to 22 LR. To use 22 LR, you utilized tround adapters and could use standard LR ammo. The Dardick came in the full-sized 1500 series and the compact 1100 series. You could even install a rifle kit with a stock and 16-inch barrel.

The Dardick and weird guns go together like chocolate and peanut butter, but holy heck was this thing decently well thought out. It had zero chance of succeeding, but I give ole Mr. Dardick credit for being creative.

One thing I appreciate about the Soviet Union is their love of assassination. A tradition continued on in Russia to this very day. The KGB reportedly loved the PSM pistol for assassinations; well, that’s how the legends go. What’s true and what’s not is not always clear when it comes to the KGB and the Soviet Union. The PSM pistol looks a lot like a Makarov, and therefore it also resembles a Walther PPK. 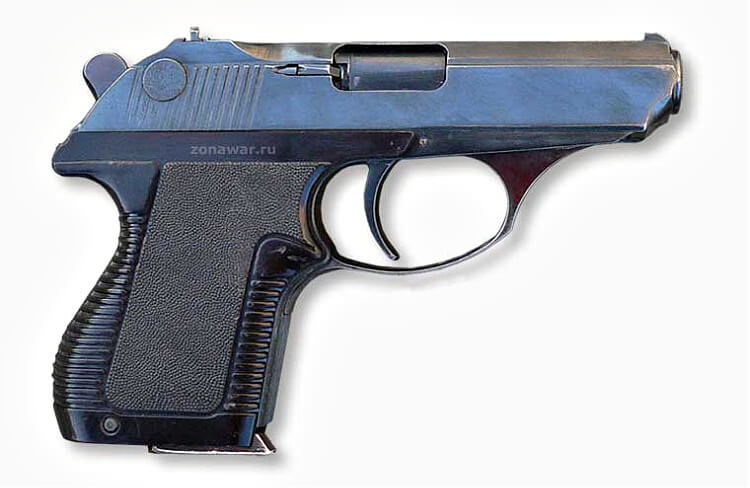 The PSM fired a 5.45x19mm round that was designed to penetrate soft armor. The projectile was a spitzer type projectile that increased penetration significantly. Allegedly the PSM and its little round could put a round through 55 layers of Kevlar.

The PSM is a slim and compact pistol that could be easily concealed. This was the initial design goal because Russian police forces most certainly required a concealed handgun for everyday ‘police’ work. The PSM is like most Russian weapons.

If you look hard enough in the dark corners of the word’s most dangerous locations, you’ll likely find one. The PSM exported all over the world, except for the United States, where it certainly couldn’t meet the sporting requirements necessary to import small pistols. Of the weird guns on this list, the PSM is probably the most practical but still odd due to its caliber and compact design.

Semi-Automatic Revolver. What’s that do for you? Huh? Not much? Well, that makes sense since very few semi-auto revolvers exist. The Mateba Unica 6 was the last designed and the best way to confuse a Fudd who clings to his six-gun. The Mateba is an Italian design that functions as a DA/SA design. 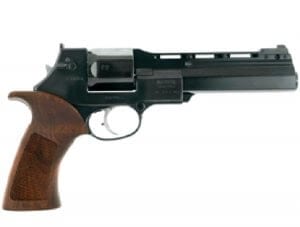 The Unica 6 fires the first round like a traditional double-action revolver. The gun then uses the recoil for the gun firing to rotate the cylinder and cock the hammer. This odd design made for an expensive firearm, but the cool factor is undeniable. As far as weird guns go, this is my absolute favorite. 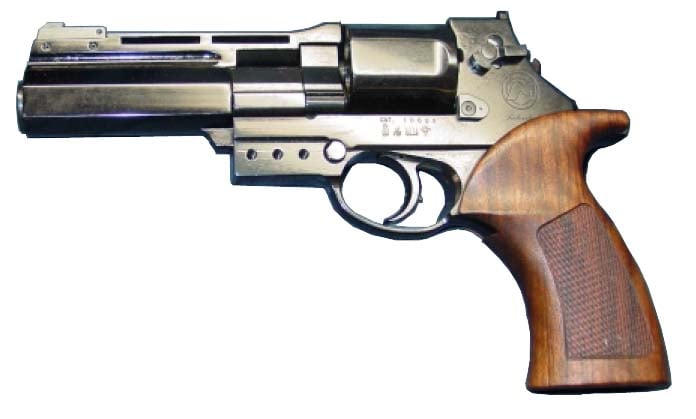 Not only does the Unica 6 have a weird overall semi-auto action, but it also has an exciting barrel orientation. The barrel is centered and aligned with the bottom chamber of your cylinder. This lowers your bore axis significantly and pushes the recoil rearwards instead of upwards.

This design is used in the Chiappa Rhino, and the designers of the Mateba aided in the creation of the Rhino. The Mateba came in various sizes and calibers. This includes 357 Magnum, 44 Magnum, and 454 Casull. Mateba promised new production Unica 6 revolvers, and they sell for around three grand.

Weird guns should be fun blips in a company’s history. It shouldn’t murder the company with no mercy. The USFA Zip did just that. It killed a well-respected revolver company The USFA ZIP is a bullpup pistol made mostly from polymer and was chambered in 22 LR. The gun fed from Ruger 10/22 magazines and seemed to be a neat little plinker. 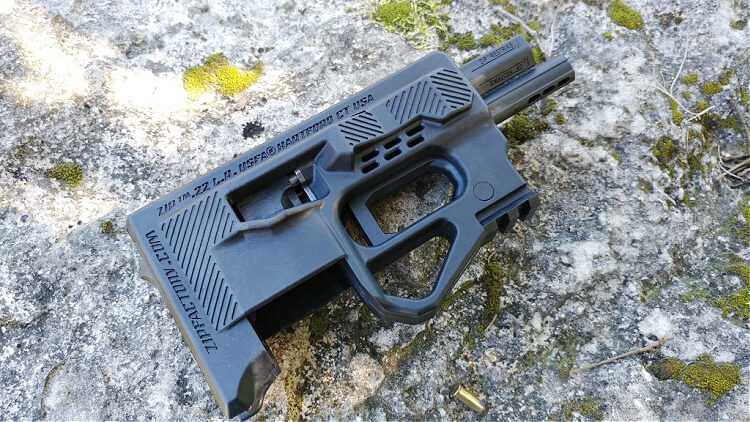 The ergonomics were odd admittedly, and somewhat dangerous. To cock the weapon, you need to place a finger nearly in front of the barrel. That’s not a promising feature, but okay. The grip was admittedly weird, and not highly comfortable, but workable. USFA promised modularity with the gun, including the ability to attach it to other guns. Why you’d want to do that, I have no idea… but you could! The USFA Zip turned out to be a rancid failure because the gun simply didn’t work. 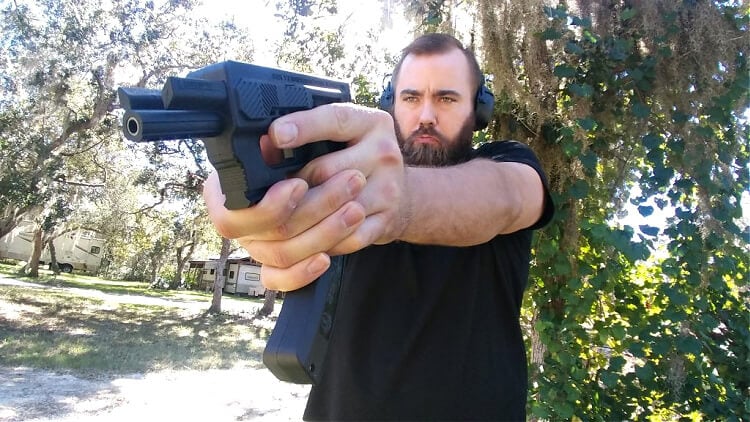 Making it through 5 rounds reliably should be considered a miracle. I own one, a fashionable paperweight, and it’s never fired more than three rounds without a failure. The gun jams very easily and very frequently. It doesn’t work and just is terrible. But it’s weird, so here you go.

You’re at SHOT Show 2014, and you wander over to Century’s boot and come across the MDL 38-3 revolver, and you likely scratch your head. It’s a revolver with a three-shot chamber that looks like something out of Blade Runner. The MDL 38-3 is a 38 Special revolver with an ultra-flat design.

The MDL is only an inch thick, which for a revolver is quite thin. It’s like a model who never quite made it. She’s thin but still kinda ugly. Revolvers already have limited capacity, and the MDL merely compromises that capacity for a thinner design. For the record, the SIG P365 is only an inch thin, and it contains ten rounds.

Like the aforementioned Unica, the barrel is mounted to align with the bottom chamber of the cylinder. This is likely quite handy in what is surely a snappy revolver. The 14.5-ounce weight won’t provide much recoil reduction, but this design will surely help.

A 3 double shot action only revolver is a hard sell and Century seemingly realized this, and the MDL 38-3 was dead on arrival. Well, it never arrived, so maybe the A word is more appropriate? Either way, the MDL was never imported, and like all weird guns, the MDL 38-3 was never destined to be a star.

The Weird Guns of the World

This is a small sample of the weird guns out there: there are more, some even weirder. I do feel this collection of weirdos don’t often get recognized when compared to famous weird guns like the Apache revolver, knife, brass knuckle thing, or the APS underwater rifle. These are the underdogs in a world of underdogs.

The 5 Most Bizarre AR 15s On the Market