I love the weird, the odd, and the fun, especially if its cheap. When the ZIP 22 premiered initially, I thought it was the perfect combination of funny, strange, and fun. At the time it seemed to be a promising gun. The company making the weapon was USFA, a firearms company known for their high-end Colt SAA clones. USFA made great guns, and while the Zip was outside their wheelhouse the gun itself seemed promising.

Note: this article originally ran in October of 2018.

It was a bullpup 22 LR handgun that utilized Ruger 10/22 magazines. Its odd box shape design was eye-catching, and the design was something no one had ever really done before.

It would be endlessly customizable with the ability to add a variety of enhancements. This included different sights, an adapter to attach the Zip to a Picatinny rail, plans for an SBR conversion and more. You can toss on a threaded barrel for a suppressor, a single shot 22 Magnum conversion, and even a plate to accept Glock factory sights over the stock Zip sights. It seemed like the sky was the limit. The best part was it was all supposed to be incredibly affordable. The platform promised to be modular, and the owner of USFA put his full weight behind the ZIP 22.

The first showing of the Zip was in a video that seemed to be aimed at going viral. A video intentionally made to drum up interest in the design. The video labeled Unidentified Firing Object was 38 seconds long and was uploaded to Youtube on June 4th, 2012. It was the only video on an account owned by a John Smith.

The video garnered 13,841 views as of this writing and did find its way to the Firearm’s blog. Here we saw a “Doug” commenting on the post, and a “Doug” apparently emailed the link to TFB. Doug Donnelly was the owner of USFA.

He commented a rather long post that reeks of marketing talk. It’s archived at TFB and a worthy read in the history of the Zip 22.

I was an early adopter and bought the first one I could. Unfortunately, it never got through an entire magazine without a failure. Different fixes were released, but the magic was gone, and I eventually traded the Zip away without much thought. I wasn’t the only one. A cursory glance at Youtube showed tons of problematic Zip guns. Issues with failures to feed, eject, and more were prevalent. There were even more reports that the Zip gun would fire out of battery, creating a hazardous situation.

Other common complaints included the placement of the charging handle and a restrike rod that put hand dangerously close to the end of the barrel. The awkward way to hold the gun, and how BX 25 magazines wouldn’t work without the Zip magazine upgrade.

Remember when I said the owner put his full weight behind the Zip? Well, he put his weight behind it. USFA was a successful company producing American made Colt clones that were revered. The owner of USFA decided to sell off all of his machinery and tooling for building those Colt clones to fund the production of the USFA Zip.

In the process, the company went under and went under hard. The Zip never really ran right. Some users got them working with the right ammo and right magazines and the upgraded spring kits, but the majority were left holding a futuristic-looking paperweight complete with plenty of frustration. This lead to the Zip factory shuttering its door and closing its website.

Imagine my shock when I discovered a new in box Zip 22 sitting on the shelf of my favorite gun store. Well, it was sitting in the back, unsold and the owner of the gun store said he couldn’t sell it in good conscience. I asked him how much he wanted, and assured him I knew what I was getting. 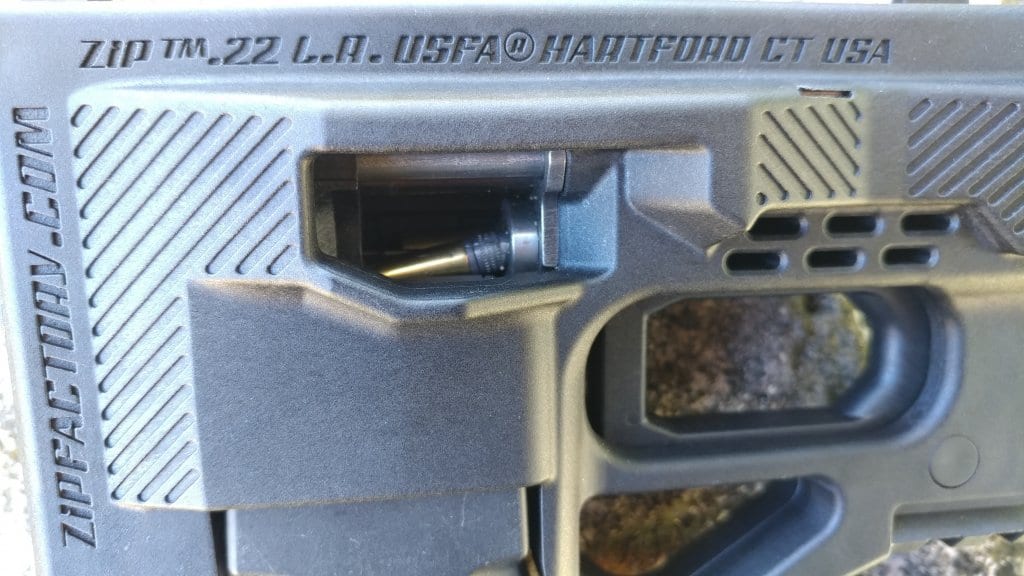 We shook hands on fifty bucks, and I left with what has to be the last brand new USFA Zip in the country. That’s easy to say because there was likely less than a thousand ever produced. I like to make the joke in 20 years I’ll have a substantial investment, and it’ll be worth a hundred bucks.

I got home, lubed it up tossed in a BX 25 and went to my backdoor range. The gun performed precisely as I remembered it. Meaning it didn’t perform at all. I actually couldn’t get past a single round without some issue.

Lots of failures to ignite, failures to eject, or extract and a handful of double feeds. The gun comes with two springs, and the ‘target’ spring is installed from the factory. I was shooting Federal Automatch, which is supposed to be high velocity and rated for automatic guns.

I swapped out the target spring for the high-velocity spring and tried again. Still no real success. Then I swapped ammo to some CCI stingers I had in the old ammo can. I didn’t get much of a change outside of firing three rounds in a row one time.

The main problem is the fact the bolt moves faster than the magazine can feed the weapon. This is just one problem, and the most common. USFA offered a magazine upgrade kit, but I’ve never actually seen one in the wild. Failures to eject are another issue which seems to be caused by too small of an ejection port.

22 handguns, in particular, tend to be very finicky, and designing one so unique seemed to be a problem waiting to happen.

The gun was an abject failure, and clearly, it deserved to be. However, did the gun do anything right? I like to think so. I find the weapon to be way more accurate than it has any right to be. Especially when you consider the crap sights. Also, the gun was cheap, with an MSRP of $199 and a standard price of $175.00. I guess you do get what you pay for.

USFA was very enthusiastic about the gun and did live up to its modular promise. They released a wide variety of different components right off the bat. This included the rail adapter, the various sights, a scope rail, a glow in the dark top rail, and more. The SBR stock was never released, or at least I can’t find any evidence of it being sold or produced.

If the gun worked, you could make a very fun braced pistol, but unfortunately, this never came to be. USFA tried hard to push the gun and wanted to make it the modular platform they promised. I do wish more companies would approach the release of their weapons with the same enthusiasm and the same amount of accessories and support as the Zip 22.

Unfortunately trying hard doesn’t always result in success. USFA is no more, and the Zip 22 is gone. It’s a remarkable end to an outstanding company.