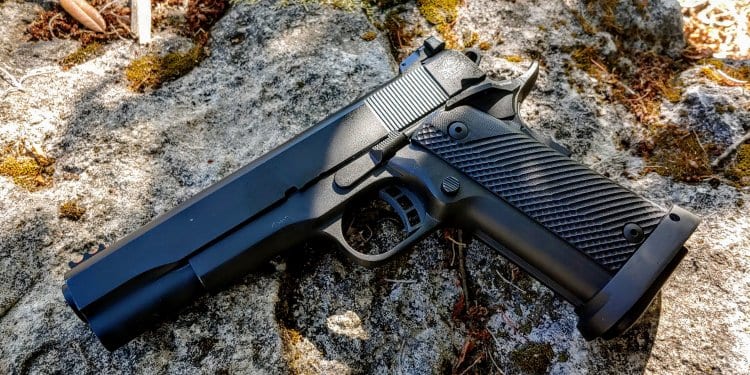 The 1911 is likely the most successful handgun ever made. Its success continues to this day and that success has also bread innovation. The 1911 is a traditional single stack weapon, but in the last decade, we’ve seen the rise in double stack 1911s. These are commonly called 2011s, but I believe STI owns the 2011 term. Either way, double stack 1911s exist and Rock Island Armory wanted a piece of that market. The Rock Ultra FS HC comes in both 10mm and 45 ACP and the 10mm model is what we are looking at today.

A lot of people like the trigger and ergonomics of the 1911 platform, but hate the fact you are limited to 7 to 9 rounds in a full sized handgun. A double stack model retains the trigger, and most of the ergonomics of the 1911 handgun while effectively doubling the capacity. The Rock Ultra FS HC, for example, offers a capacity of 16 rounds of 10mm. 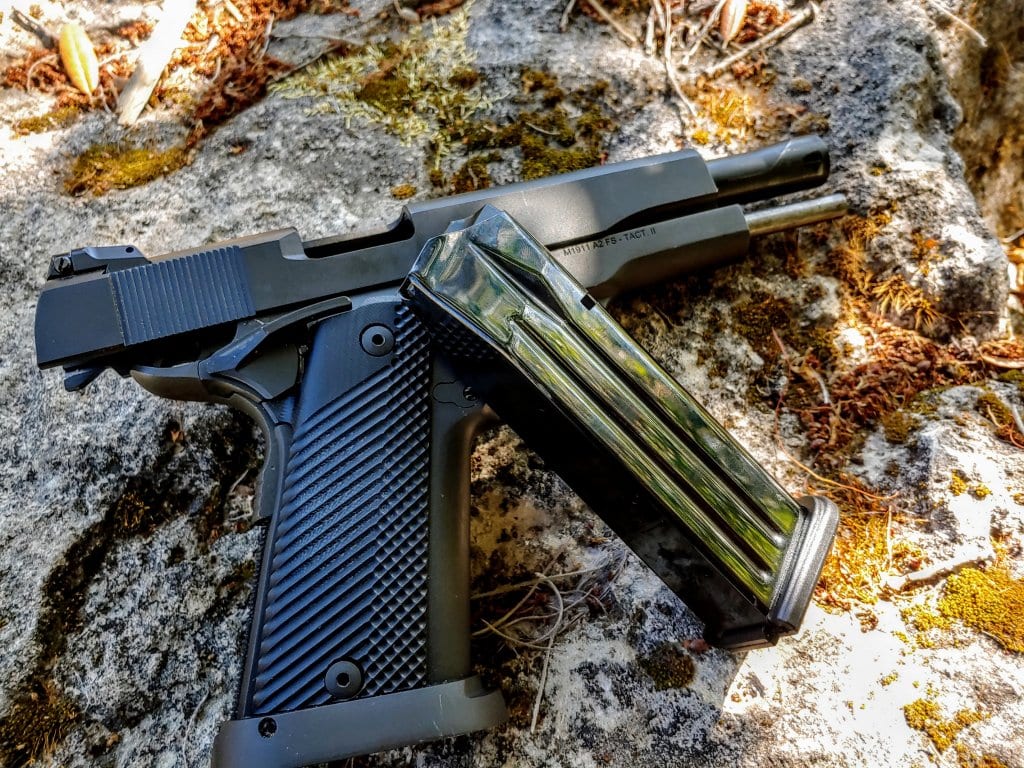 Double stack 1911s, or 2011s–or whatever else you want to call them–are expensive. They are typically high-end competition guns and crafted to be performance oriented designs. This makes them cost several thousand dollars. Rock Island Armory is producing them for hundreds of dollars. They won’t be as refined as a 2K gun, but they are functional, fun, and do offer that increased capacity.

Man, that is a long name. FS stands for full sized, and HC for high capacity, so I guess it could be longer if they didn’t rely on abbreviations. This is a big gun, a very big, grip filling gun. I wear 2XL gloves and this gun fills my hand to near capacity.

Size wise the gun is 8.75 inches long, 1.313 inches wide, and 5.5 inches tall. It weighs almost 3 pounds unloaded. It is not afraid to be big and takes no aim at being a concealed carry gun. It’s certainly a gun that’s more suitable for competition, home defense, or predator defense in the bush than daily carry. 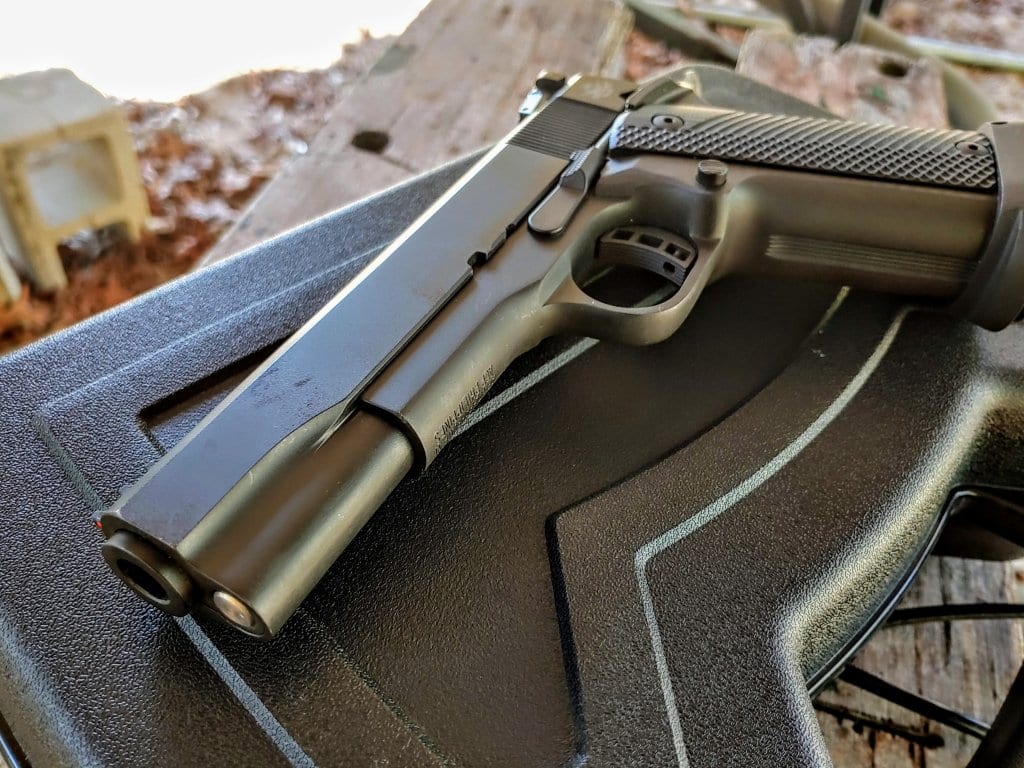 A “tactical” model exists with a rail as well

The gun comes with two 16 round magazines, and stock mags are expensive. Luckily, Rock Island uses Para pattern magazines and these will work with the affordable, but quality Mec Gar P16 40 S&W magazines.

Yep 40 S&W mags, they are long enough to accommodate the slightly longer 10mm cartridges. There is a catch though, these mags have an extended lip that’s part of the base plate. It’s a little long for the Rock Ultra FS HC, so you have to file it down, or find a new baseplate. Apparently, the Dawson Precision extension base plates work, but  I have no experience here.

Filing the lip down really isn’t that hard and to me, it’s worth it. The Mec Gar mags are half the price of the RIA mags. 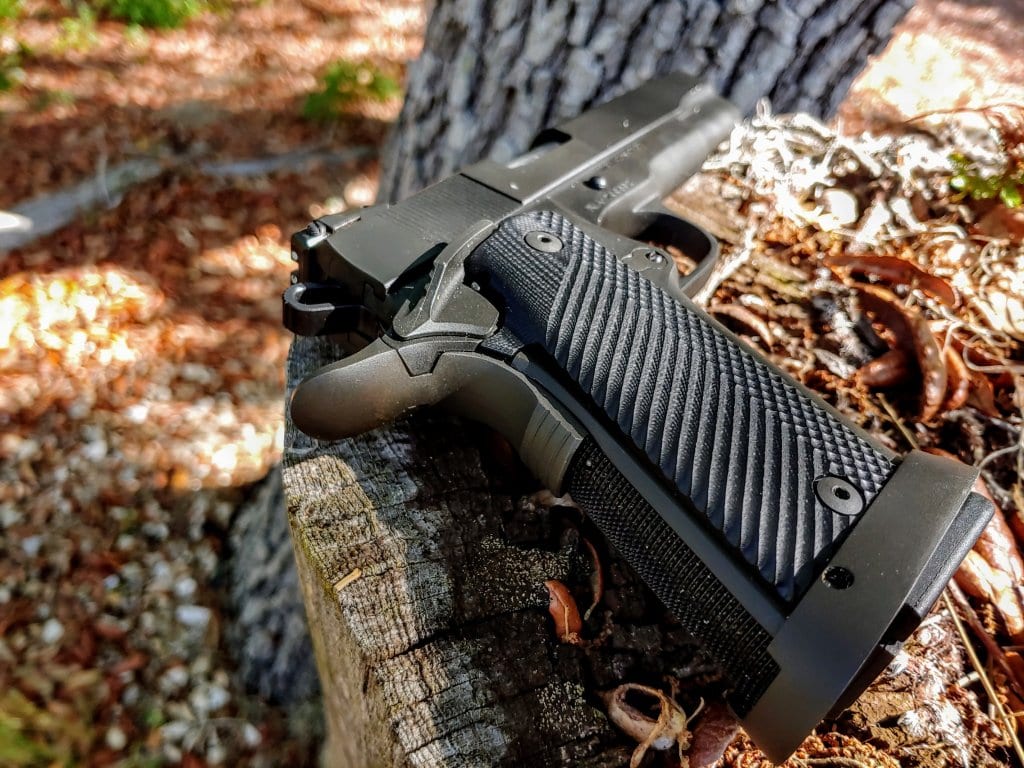 Front and rear strap serrations with G10 grips give you outstanding grip.

The grips are made from G10 material and are very aggressively textured, not uncomfortable, but aggressive. The rear and front strap of the grip is also textured for increased control. Very nice touches overall.

The Rock Ultra FS HC is chock full of features, this includes an ambidextrous safety, a skeletonized trigger and hammer, LPA adjustable rear sight, a high viz front sight, and an extended beavertail. 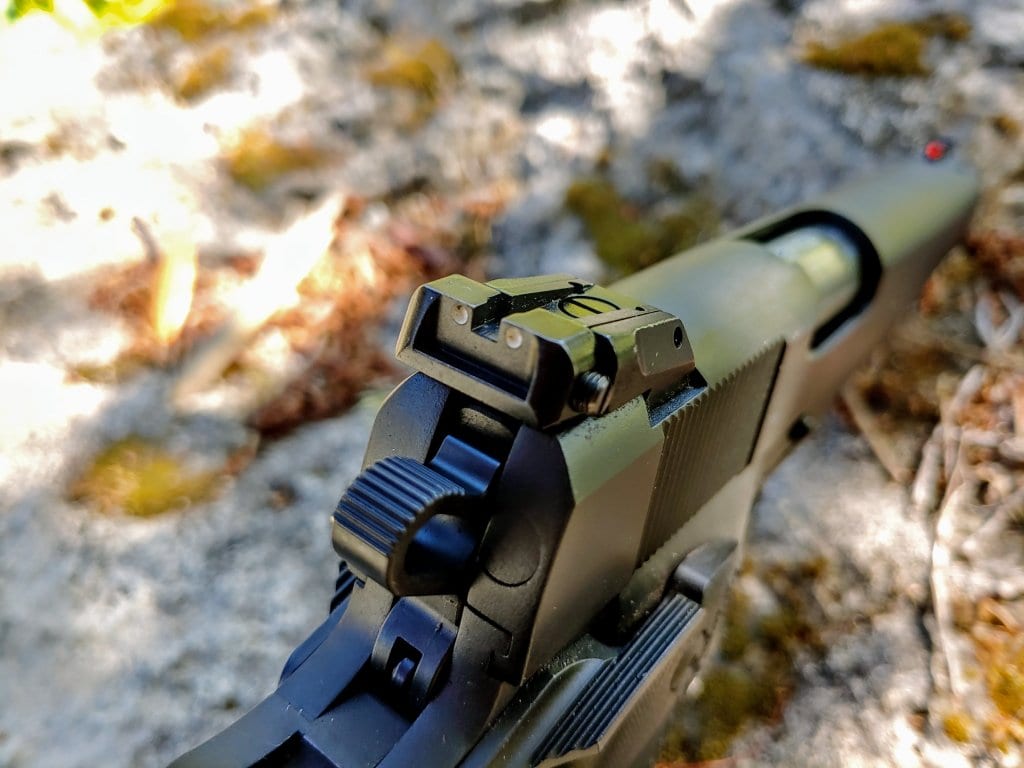 The gun is a semi-custom shop-style build. The finish is parkerized and a matte blackish gray. It’s a rugged finish and has held up well after lots of abuse. The Rock Ultra FS HC even incorporates a big magazine well to that makes reloads quick and easily accomplishable. 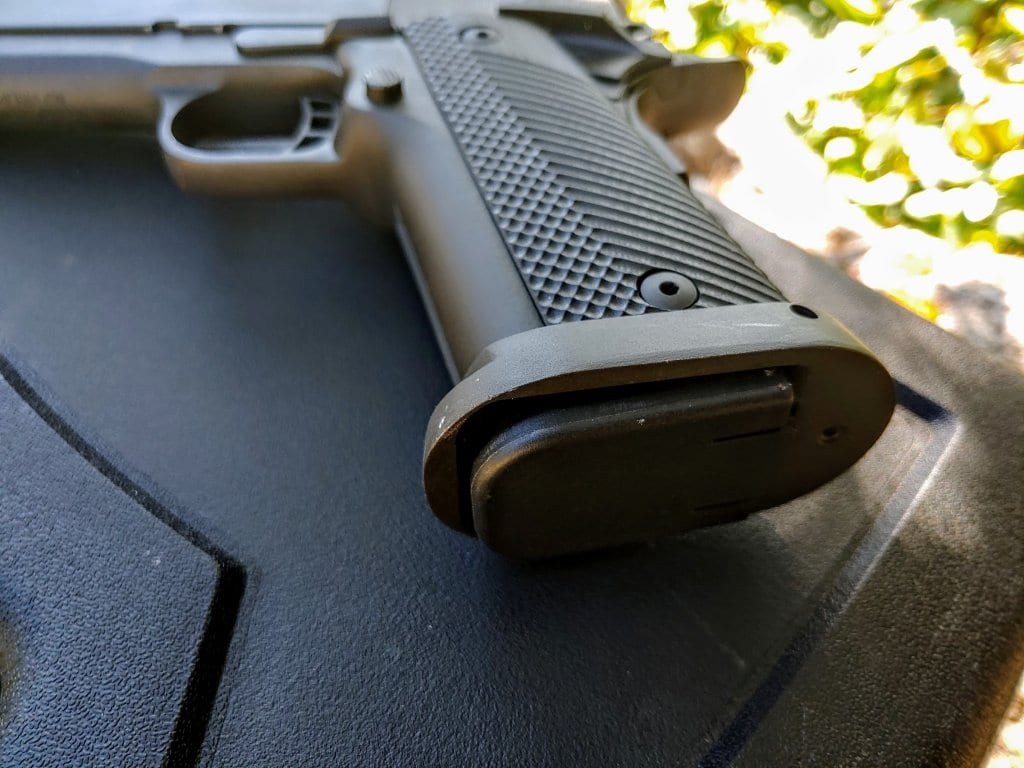 Flared magwell makes it easy for even cavemen like me to reload.

The safety is very reactive and you’ll feel it move up and down with a loud and tactile click. It’s wider than I like but does provide a ledge to rest your thumb on. The left side of the safety does dig into my hand a bit too much with heavier recoiling loads and I don’t care for ambi safeties for this reason. 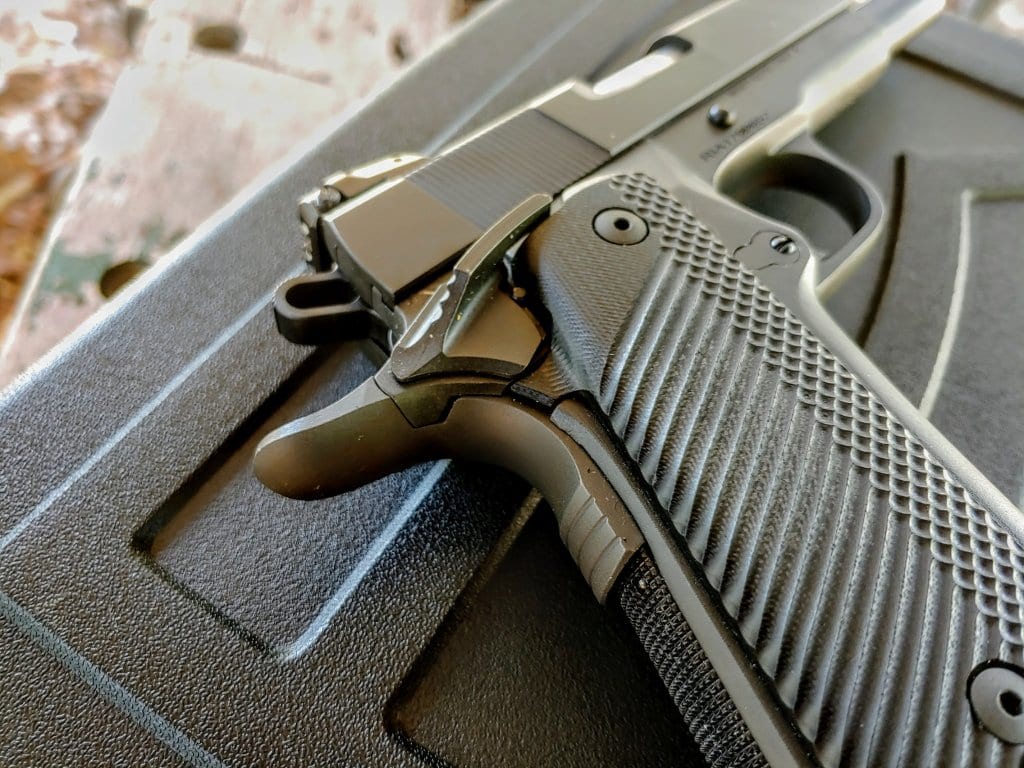 The massive beavertail and ambi safety are very present.

Beyond that, the Rock Ultra feels refined. The hammer clicks into place smoothly, the slide feels like it’s on ball bearings and glides rearwards. The magazines drop free with ease and they glide into place during reloads.

The Rock Ultra FS HC is an impressive gun for the $798 MSRP. Most important though, how the hell does it handle?

Hitting the Range with the Rock Ultra

The 10mm is a versatile round and there are lots of loads available. Admittedly I shot mostly cheap Armscor and Prvi Partizan ammo that’s mildly loaded in terms of 10mm loads. I’ve also fired a good bit of defensive 10mm, and even 20 expensive 180 grain Buffalo Bore JHPs at 1350 feet per second.

The gun runs it all and, malfunction wise, has been perfectly fine. When shooting Buffalo Bore, the front sight randomly popped off. It doesn’t seem to be secured. I tossed some Loc Tite on it and it hasn’t been an issue since. 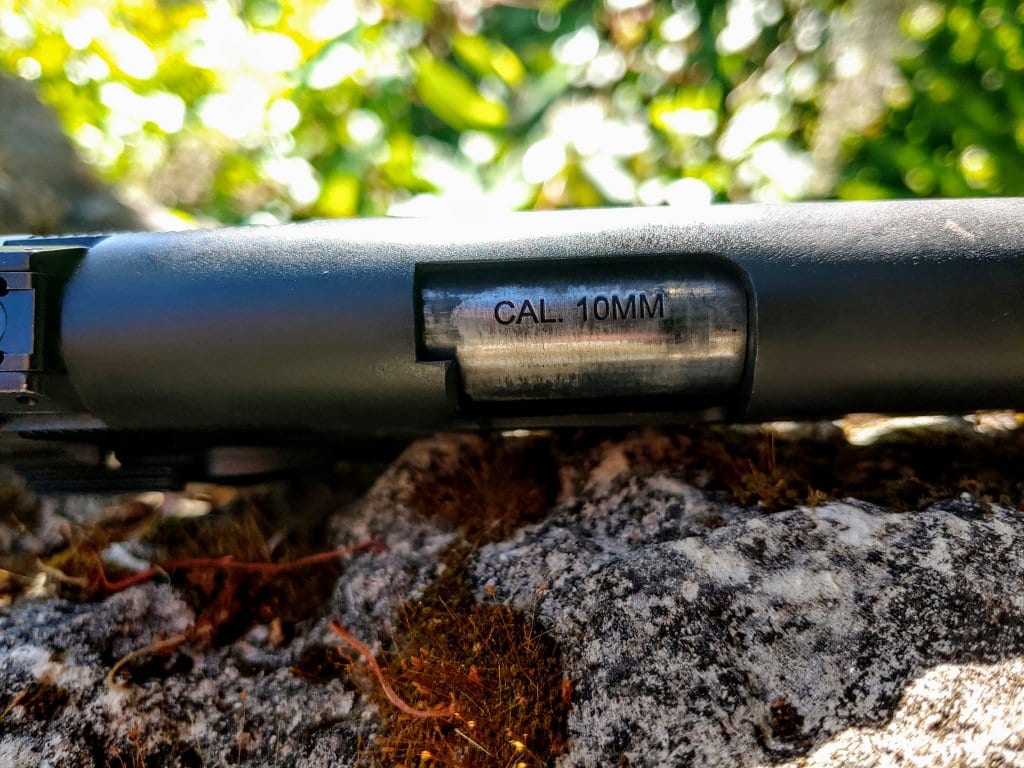 Recoil varies between loads and predictably the Buffalo Bore was the worst. However, it’s not bad. That wide grip displaces the recoil more than a thin grip, which makes it less painful. The 3 pounds of metal the gun is made from also helps. It’s a good push and a nice snap, but not painful, or difficult to handle in any way. If you can handle a standard 1911 45 ACP then you can handle this gun.

The Rock Ultra FS HC is a fun gun to shoot, especially with mid-tier practice ammo. The gun is easy to control and you can spit some real fireballs quite quickly with this 10mm. The trigger is standard 1911, it’s not special compared to one of those 2K custom guns, but still short and sweet. The reset is also very tactile and nice. 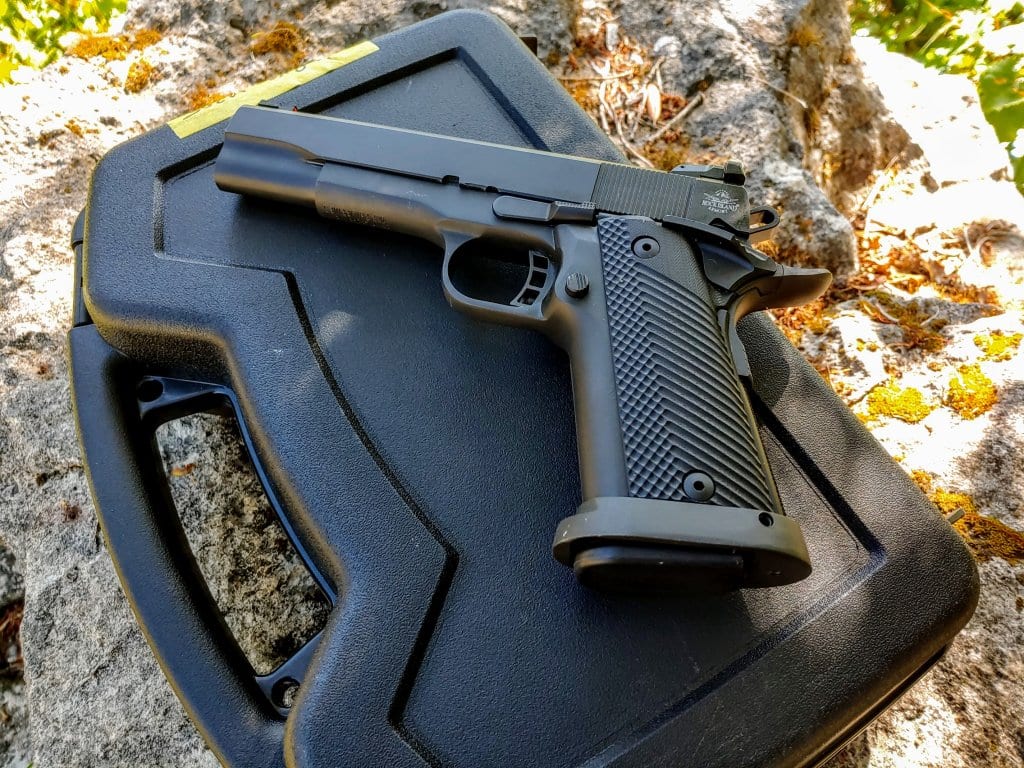 Reload drills are actually a lot of fun due to the magwell. This is the first overtly aggressive and wide magwell I’ve used and I thoroughly get it. I can have the dexterity of a caveman and still reload fast with this setup. 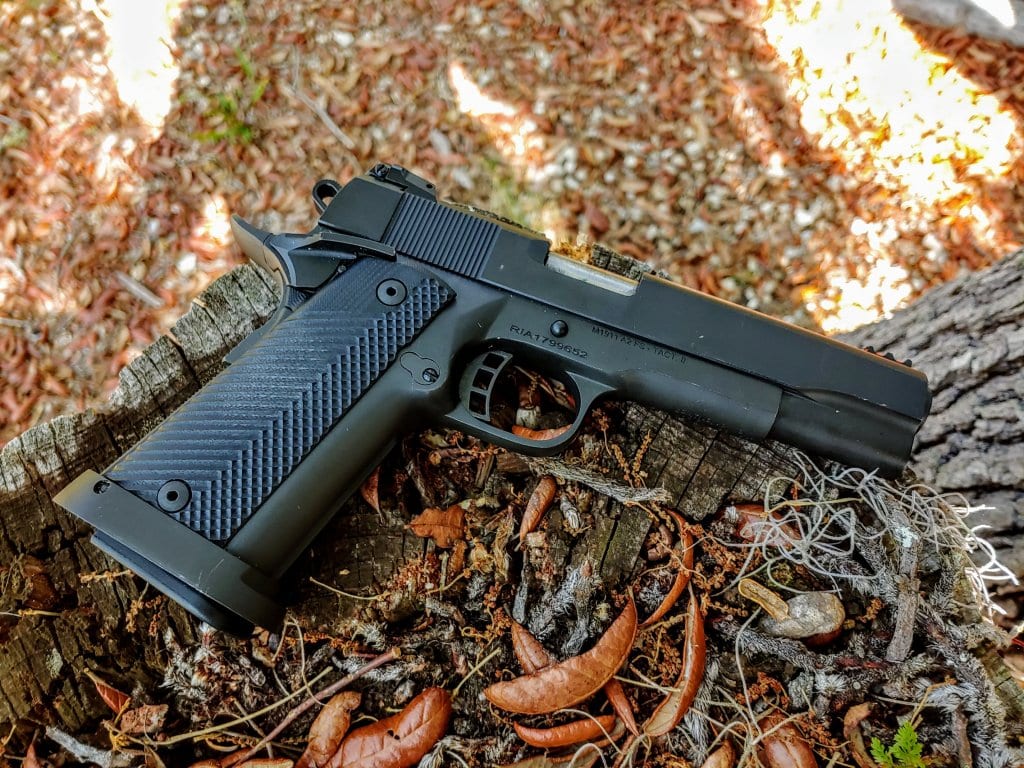 The gun’s grip width is going to be a turn off for people with small hands for sure. That would be the biggest complaint I can come up with. Other than that the Rock Ultra FS HC is a well built and fun gun. I don’t shoot competition, but this could and would be a great comp gun. For me, it’s just a fun target gun is a very capable caliber. It’s chock full of features and is the most affordable double stack 1911 I could find, and it’s in 10mm so what’s not to love?