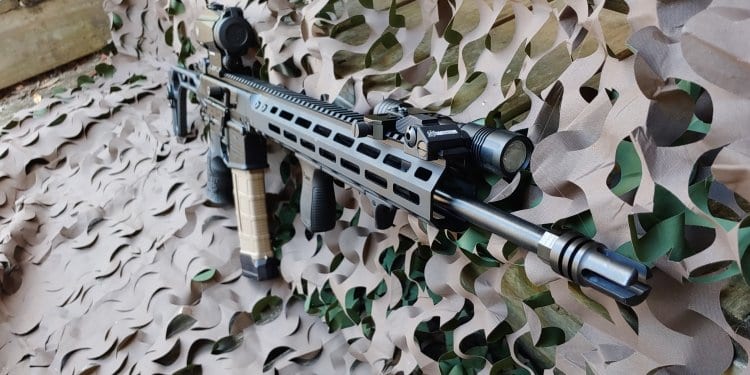 Frank Woods did it first with his Neo-Retro BRN 180, and you should certainly check that article out. He made a cool gun with an interesting concept. I went a different route. I went with a course that purely appealed to me and what I wanted from a BRN 180 based upper receiver. Why? Because I’m a contrarian and while I’ll say the AR 15 is a great weapon, I like something different. This isn’t a build article necessarily, though, and this is a review of the BRN 180 Upper receiver. The build somewhat ties into the review, but don’t dig too deep into it.

The AR 18 and, by extension, the AR 180 were not popular weapons. Armalite’s dream of selling not just a gun, but the tooling and rights to produce a gun on the cheap just never really came to be. The design itself was exciting and was quite a bit different than the AR 15.

No army every officially adopted the AR 18, but it did inspire plenty of weapons. The Howa Type 89 is the closest the AR 18 got to seeing adoption. The Irish Republican Army were big fans of their little Armalites and used them during the appropriately named Troubles. In the states, the semi-auto AR 180 didn’t sell so well either. It died, and we didn’t see it again until 2001 with the AR 180B, but that gun didn’t stick around very long either.

Brownells has been killing it with the retro line of rifles and decided to do something different. They decided hell, let’s make an AR 18 upper receiver that will fit standard AR 15 lower receivers. The gun is a weird combination of retro AR 18 design and modern influences. The BRN 180 was a joint project between PWS and Brownells, and the result was a well made, modernized AR 18 upper receiver.

The BRN 180’s use of guide rods and return springs eliminates the need for a receiver extension, buffer, and buffer spring. This allows you to utilize a folding stock, and you can fire with the stock folded. I equipped my Aero lower receiver with a KNS MCX stock adapter and a first-gen MCX stock. I utilized the full-length 18.5-inch BRN 180 upper, but imagine how small you could make a gun with the 10.5-inch upper and PDW style MCX stock. There is also a 16-inch barreled model should you want standard carbine length.

The BRN 180 utilized some old school AR 18 features, while also modernizing the gun. The old school design includes the three-prong flash hider and the dog leg charging handle. The more modernized design consists of an M-LOK rail system and a flat-top upper receiver. The BRN 180 is a very light upper receiver, even with the 18.5-inch barrel.

Controls vary on what AR 15 lower you choose to use, and the BRN 180 is indifferent to how you decide to configure the lower. I used an Aero with a DD parts kit, and I also have a BCM complete lower for when I want a more supportive stock. I thought about taking an 80% lowers route, but I didn’t feel like milling a lower out. As a heads up, the upper and lower fit is quite tight, which seems universal over every lower I’ve tried.

The BRN 180 is one smooth shooter, and it’s so enjoyable to put lead downrange with. Without a doubt, the 18.5-inch barrel also helps with that. The 5.56/223 round is designed for a 20-inch barrel, and the closer you get to 20-inch barrels, the smoother the gun feels. It also generates a bit more velocity to get a little more penetration should you need it.

The smooth shooting, low recoil, and minimal muzzle rise the BRN 180 are all great, but the gun has a problem most piston guns have. Accuracy. The 223 Wylde chamber helps a bit, as does the versatile 1:8 barrel twist, but this is not a sub MOA or even an MOA gun. Although, I’m very nitpicky. 1.3 to 1.8 MOA isn’t terrible and is perfectly acceptable.

I bet it would tighten up more with some heavier rounds, but this is being written during the ‘rona drought, and ammo is tough to find. I used both 55 grain and 62-grain loads from Federal. It’s the usual cheapo stuff, nothing fancy is on the shelves right now. Let’s be real here. If I wanted a defensive rifle, this level of accuracy is still beyond acceptable.

Nope. Well, not in my experience. Even with el cheapo Tulammo steel cased Eastern European crud. It eats it all and does so from whatever AR 15 magazines you choose to feed it. I used P-Mags, Lancers, and even the Magpul D-60 drum. There were no issues, and the gun fed, ate, and fired whatever I put through it. The original AR 18 was reportedly quite reliable, and the BRN 180 luckily kept that reliability. Albeit, there seemed to be a few issues at the beginning of BRN 180 production, but PWS and Brownells fixed those quite quickly.

The M-LOK handguards are quite slim and seem well made. I’ve attached a whole ton of stuff to them easily enough. The downside is that these suckers get real hot real fast. They can get uncomfortable quickly. I tossed on an M-LOK rail and grip kit, which helps quite a bit and keeps things decently comfortable. Some folks have developed wraps, I just go with gloves and it seems to be a simple solution.

The BRN 180 is a slick upper receiver that brings back the glory of the old and oft-forgotten BRN 180. Brownells is also producing BRN 180 lowers if you want something a little more retro and want to match your receivers. The upper is a promising start, and it quickly became a favorite of mine.