I had the good fortune to attend an invite-only Surefire, LLC media event called Back to the Bills, this past August. Hosted by Oakgrove Technologies, Back to the Bills was an incredible three-day event that showcased an array of Surefire lights, as well as master-level instruction from Bill Blowers of Tap-Rack-Tactical, and Bill Rapier of American Tactical Shooting.

The event was an amazing affair with excellent instruction, turnkey hospitality from Oakgrove Technologies, and excellent product exposure from Surefire, LLC.

Surefire, LLC premiered their newest light for us, the XSC weaponlight, which we weren’t allowed to talk about until recently. The XSC is a purpose-built little rail-mounted weapon light that will currently fit the railed Glock 43X and G48, the Sig Sauer P365 and P365XL, and the Springfield Armory Hellcat. This little weaponlight was specifically designed for the concealed carry end-user, as evidenced by the initial platform compatibility. 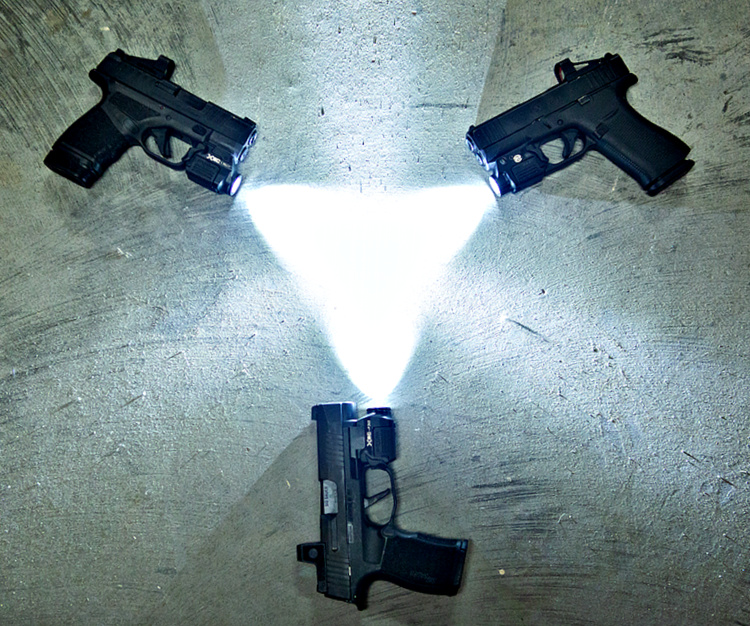 First, let’s talk about what this light is not. The XSC series is not a fighting light that one would attach to a full-frame pistol, that is what the X300U is for. The XSC will not offer face-melting lumen and candela output, so it is an unfair comparison to put the XSC series up against the X300U series or comparable lights.

What the XSC is, is a solid light that is heads and shoulders above other subcompact lights out there for sub-compact pistols. Prior to the XSC series, most weaponlights for popular subcompacts boasted a low pricepoint and anemic-at-best illumination. Surefire’s XC1 and XC2 series showed promise, but it was hard to swallow the price point, short run-time, and low output for the prices that Surefire, LLC commanded.

The XSC: a Solid Improvement Well Worth Consideration 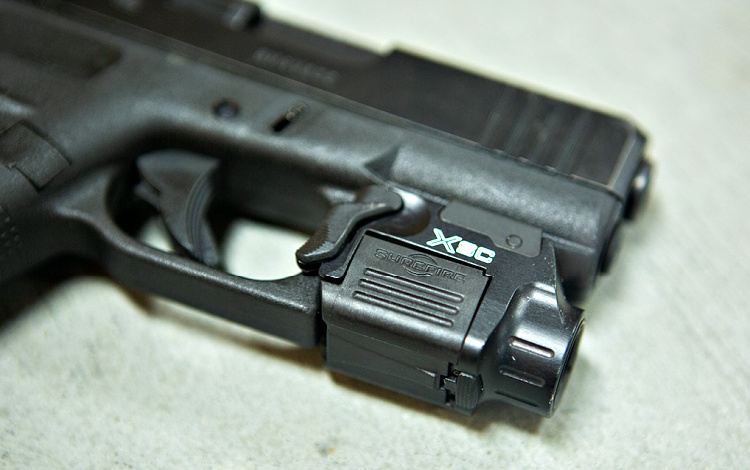 Coming in at a scant 1.7 ounces and just under 2 inches long, the XSC still maintains a svelte, unobtrusive profile. Boasting an output of 350 lumens right out of the gate as well as 2,000 candela, the XSC is an obvious white light improvement over the XC1 (300 lumens/820 candela), the XC2 (300 lumens/820 candela), and the Streamlight TRL-6 (100 lumens/2,000 candela). I’m not even going to mention some of the other options out there with 100 lumen/89ish candela options, it’s just not even worth going into.

The XSC comes with one lithium rechargeable battery, as well as a dual-bay charger. This initially raised my eyebrow, as did the advertised runtime of 30 minutes. At first, I saw this a huge drawback. Thirty minutes of runtime is not what I’m used to, running a X300U on all of my compatible duty guns, but again, I had to remind myself that the XSC was not designed or intended to be on a full-frame fighting or duty gun. It caters to a specific market, and that is of the sub-compact CCW concealable pistol.

I am fortunate enough to have never had to shoot anyone on or off duty, and I have yet to encounter a time in in the 14 years that I’ve been a cop where I ever conducted prolonged weaponlight-only searching or illumination that exceeded 30 minutes with a sub-compact pistol…or even 10 minutes at that.

Thirty minutes, in the greater scheme of things, is an acceptable runtime for this light, especially when it comes to illumination using a sub-compact pistol, even without a handheld light, which one should carry anyways (in my opinion).

Looking at the battery itself, it is kept in place by slots and a spring-loaded switch. The battery can be “hotswapped” out with a replacement; swapping batteries can be done on the fly, and does not require disassembly or removal of the weaponlight from the host platform in order to do so.

The battery itself, once removed, gives the user access to a battery status button. Once pressed, the battery will illuminate 1-3 lights on the side of the battery to indicate relative charge level, much like a portable battery bank. 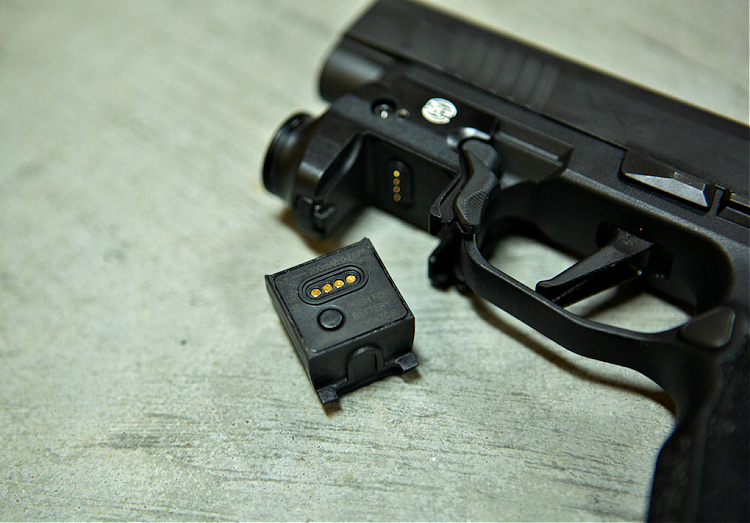 At the time of this writing, the XSC ships with a dual bay battery charger. A secondary battery will cost in the ballpark of $40, which will pay for itself easily over time, so it would not be unreasonable to have multiple charged extra batteries at the ready for extended range sessions, a concealed carry class, or simply to be prepared for when Murphy comes to town.

I’ve been pretty critical of Surefire, LLC of late, and a lot of it has to do with their Maxvision beams. I understand why they made them, and they are in fact, very well made. I will readily admit that I’m biased towards strong hotspots on my weaponlights, but that is because I’m often trying to break through photonic barriers such as dark window tint in my current job. The Maxvision beam pattern just didn’t work for me in that specific context.

That said, the XSC with its own unique parabolic reflector, has more of a hotspot that the Maxvision beams, but with a very acceptable amount of throw and spill for positive identification in short to medium engagement ranges. For reference, Surefire, LLC advertises the XSC as having an approximate 90-meter throw capability, which is a much farther shot than I’d be willing or justified to take in a self-defense, subcompact pistol situation. 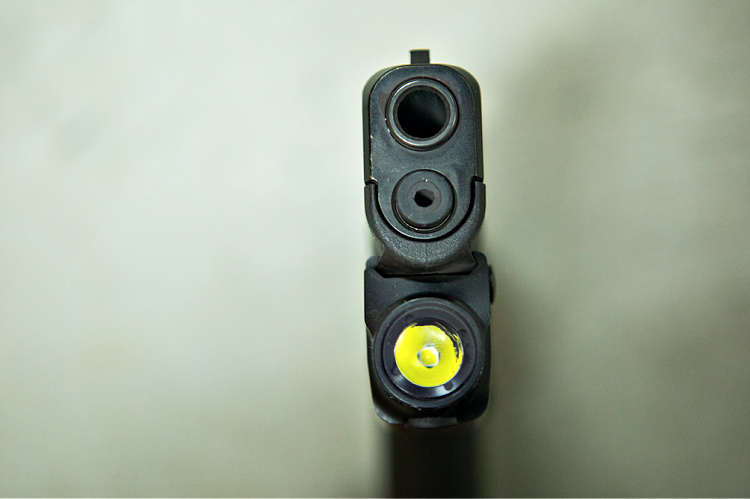 Bottom line, if you’re shooting a micro/sub-compact pistol in a self-defense situation, you’re likely to not be in the 25+ yard range. The XSC performs very well within this short to medium engagement range for target acquisition and positive identification.

Based on the small framed pistols that can currently mount the XSC, activation and weaponlight manipulation is pretty easy for a multitude of different sized hands. The light features two ambidextrous paddles situated close to the trigger guard. Each paddle is scalloped and with subtle horizontal serrations, making for an intuitive ‘shelf’ for the activation finger. A constant press down on the paddle will allow for ‘momentary-on’ illumination. A single press-and-release will activate ‘constant on’ illumination.

During my time with the XSC at the Back to the Bills event, I had no issues with light activation, although it does take some time to acclimate to the controls. A couple of the other writers believed the constant-on light setting would turn itself off during recoil on occasion. Again, I did not experience this myself, however it will be something to look for in review periods to come. For now, until reviewers have a good amount of time with the XSC, I can’t say either way whether it was operator error or a design flaw. Time will tell.

The only issue I personally encountered with the XSC was that during nighttime practical shooting, my battery popped out mid-draw, leaving me to spend an embarrassing amount of time trying to acquire the target in near-dark with a lightless weapon light. This was not so much a flaw of the light itself, rather, a failure on my end to make sure that I properly function-checked my equipment before deploying; I obviously hadn’t seated the battery completely into the weaponlight housing prior to holstering and getting ready for the next course of fire. Something to keep in mind along with chamber checks prior to leaving the house on your next trip to the grocery store.

I was not completely blown away by the XSC, being spoiled by my X300Us on my compact and full-sized pistols, but for what it is, and compared to other comparable lights out there, I will definitely be getting one for my Sig P365. It is a solid blend of light output and concealability for self-defense concealed carry distances. 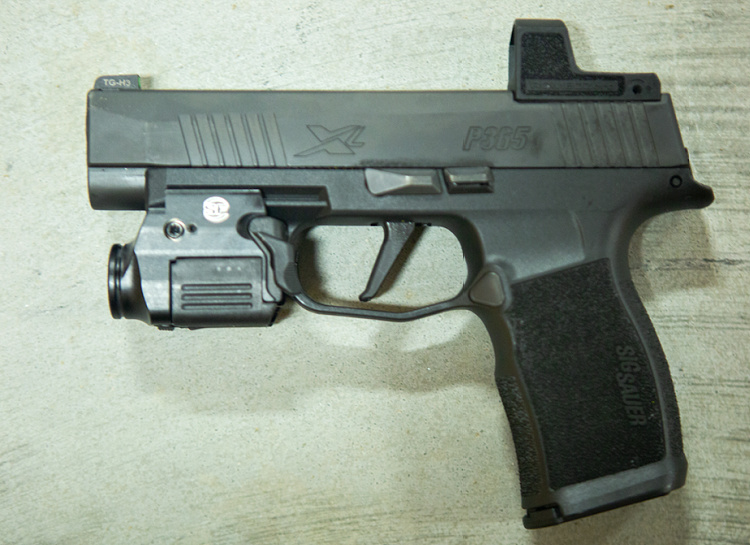 I anticipate that kydex benders will soon be offering carry holsters to accommodate the aforementioned weapon/light combos, and hopefully Surefire, LLC will expand the family for more compatible sub-compact pistols in the near future.

With an MSRP of $329, I would anticipate street pricing to be right around $300 or so. For the average American, that’s a pretty steep price for a micro-sized weapon light, but if concealability and good output are important to you, the XSC is well worth consideration.

Chris Tran
Chris Tran is a seasoned and accomplished law enforcement officer for a large metropolitan agency in the Pacific Northwest. In addition to photography and videography efforts, Tran writes equipment reviews aimed towards the everyday user with a focus on functionality, durability, and cost-effectiveness. Chris advises, "I support and will positively review any products that I find to be interesting and of quality as it pertains to normal people like me. I am not a high-speed, super-secret 'operator'. I am a normal civilian like many, if not most. Anything I review will be from an end user's perspective with my background as a cop to supplement my perspective on usability, function, and cost-effectiveness. Bottom line, I won't speak about what I don't know, and if I like or don't like it, I will candidly tell you why. Among his credits are numerous articles written for Guns & Tactics Magazine, UN12, Black Sheep Warrior, and RECOIL's Concealment magazine (q.v.). Follow him on IG, @christranfiveoh.