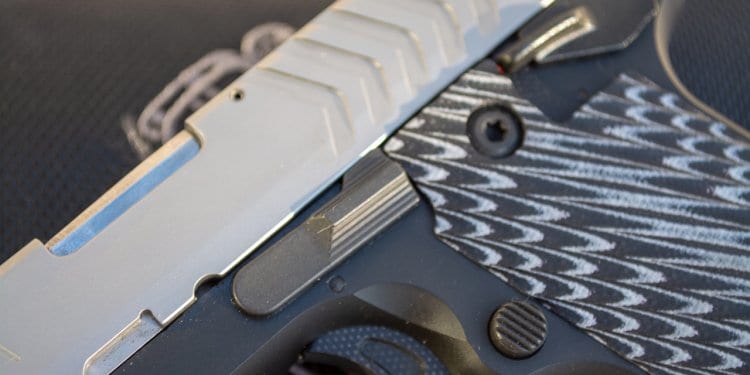 Semi-automatic pistols have a neat little lever on the side that both locks the slide open and allows it to close. This feature has both administrative and “tactical” (for lack of a better word) purposes. Administratively, it’s handy for showing an empty gun and field stripping for cleaning and maintenance. Tactically, the lever is one way to close the slide after a magazine change. In most cases, when a pistol runs dry, the slide will lock open, thereby notifying the user that it’s time to reload. After inserting a fresh magazine, the user can operate the slide release lever, allowing the slide to close, pick up a new round, feed it into the chamber, and finish (if necessary) the striker cocking process. Of course, the exact same result can be achieved by a slight tug backward on the open slide, then letting it go. 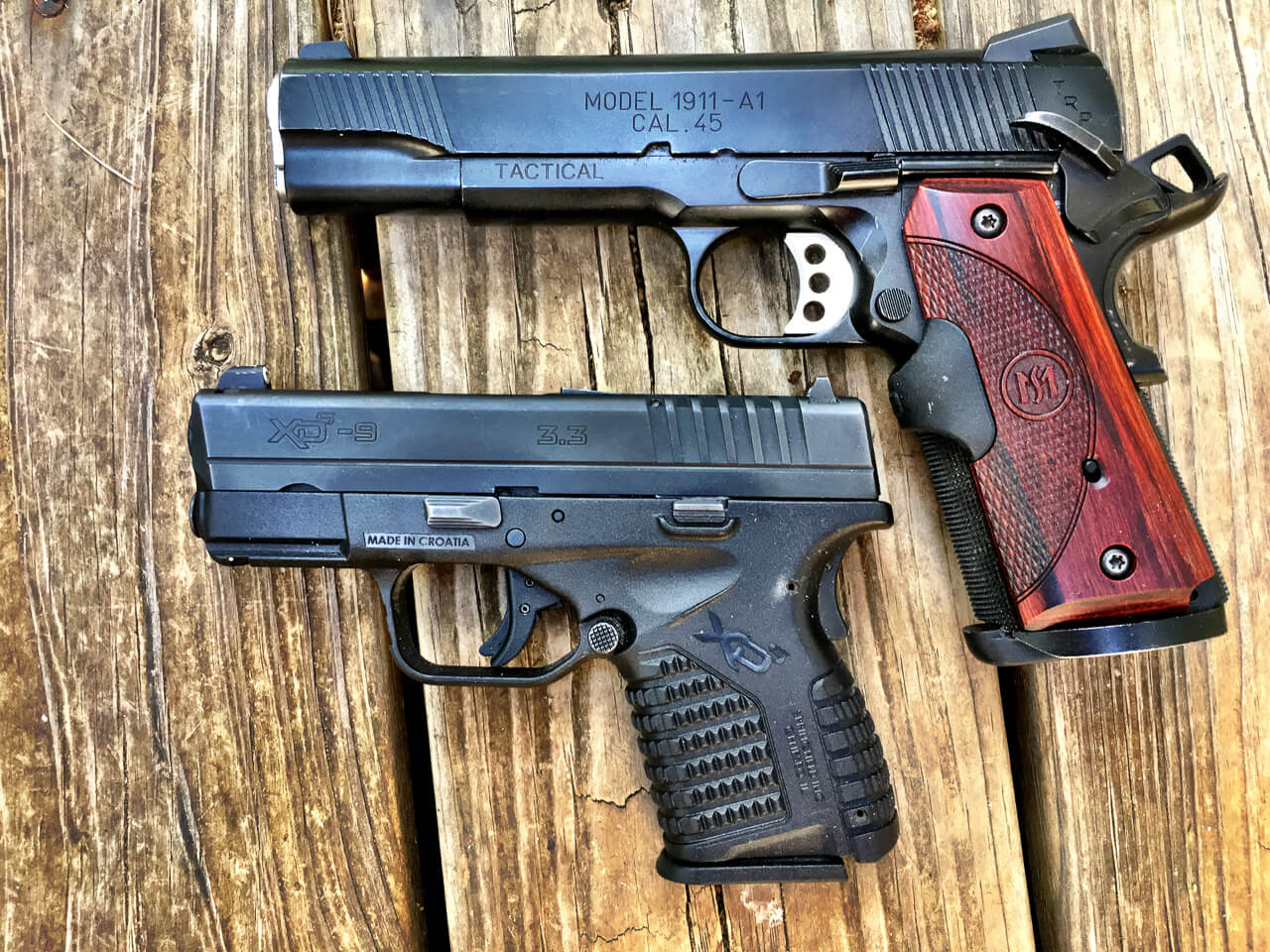 I have to twist my grip to fully reach the slide release on a 1911. I have to twist the opposite way to move my thumb back far enough to reach it on this XD-S.

For dynamic shooting, such as self-defense situations, there are different schools of thought on which is the right technique to use after a magazine change. The correct answer? It depends. Let’s take a quick look at scenarios where each action might be beneficial.

When the Slide Lever is Advantageous

Few would argue that using the slide release button is the fastest and most efficient way to close the slide and ready your pistol after a magazine change. Your hand is already in the right general vicinity and with most pistols, you can reach lever with your firing hand thumb while maintaining a proper grip. There’s no unusual movement required to release the slide and since you (probably) don’t need to adjust your grip, there is no recovery action required after you hit the slide release lever.

While the slide lever is almost always faster, there’s another big benefit to this approach. The action only requires one hand. If your support hand is occupied with a cell phone, fighting off an attacker, pushing a family member away, or a thousand other activities, you’re still good to go.

When the Rack Method is Advantageous

The alternate method is to use the support hand to draw the slide back a fraction of an inch and let it fly. Proponents of this method point to absolute reliability – it always works. There’s no part to break or wear. From those on the “racking” side of this debate, you’ll hear comments like, “The slide LOCK is for LOCKING. Using it to release the slide will wear it out over time!” Maybe, maybe not. You’ll also hear that racking a slide uses gross motor, not fine motor skills, so it’s more reliable in a fight. While these arguments may never be solved, there are other very clear scenarios that might warrant training for the racking method. 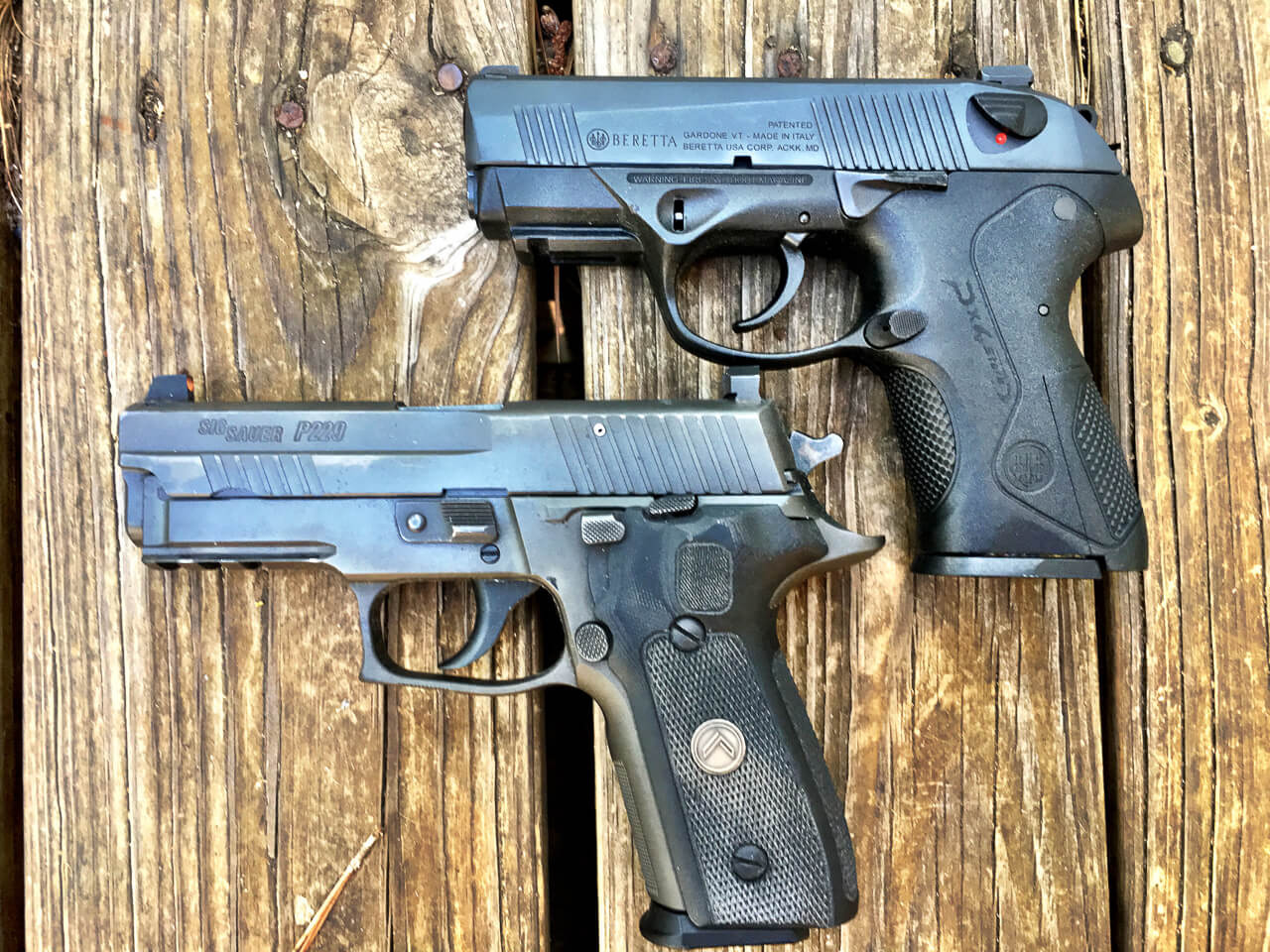 If you train to use the lever on this PX4, then switch to this Sig P229, you’ll actually hit the decocking lever since they’re in the same location.

If you have multiple handgun types in your home, they may very well have slide levers located in different positions and require different movements to operate under stress. You can eliminate any ambiguity by racking the slide – that works on any semi-automatic pistol. While it would be an unusual situation indeed to have to pick up a gun off the street and make it run, you might very well need to use your spouse’s gun.

The other big reason to consider using the racking method as your default is if your pistol has a rotten slide release function. Small semi-autos are notorious for small slide release levers that require Herculean strength to operate. That’s not something to fool with in a stressful encounter. Some of them are even well recessed and especially hard to reach.

There’s one more consideration. Training to rack a slide solves multiple potential problems. If the gun goes “click” then that’s part of the first immediate action, whatever the reason. If you have to change mags, it works. If there is a malfunction, it works. 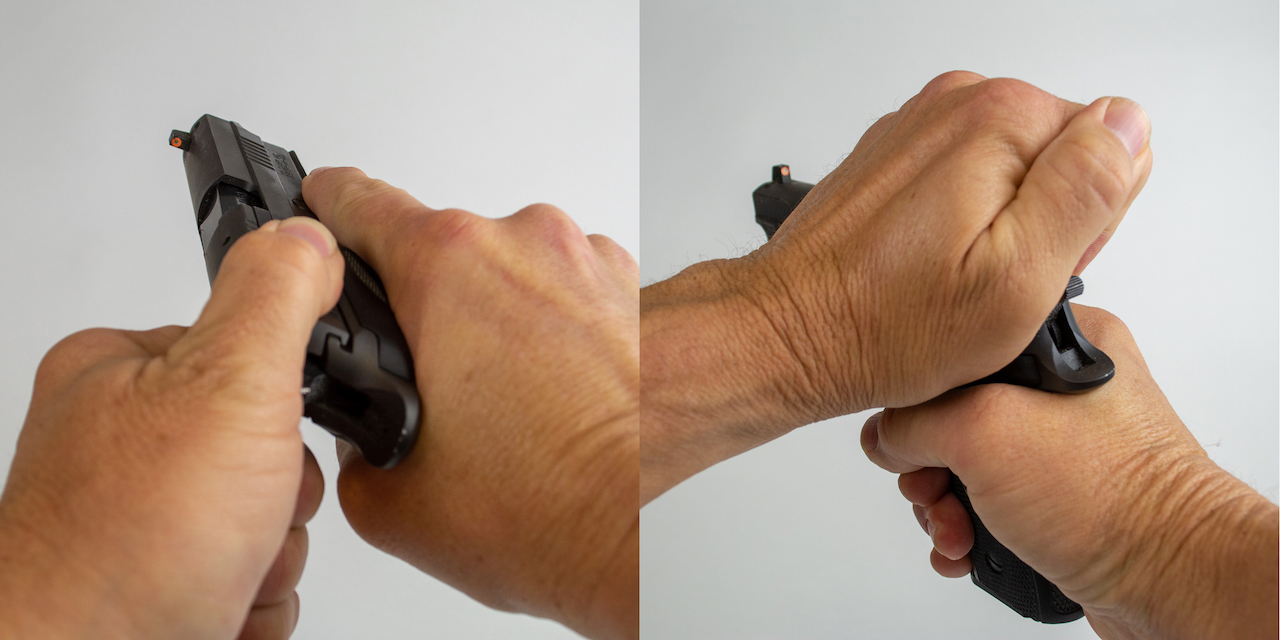 Whether you prefer the pinch or overhand method, training to always rack the slide has some advantages even though it’s slower than using the slide release.

I’ve always trained to use the rack method, so that’s my habit. I don’t necessarily do this for “tactical” reasons. My reasons are more mundane. Since I’m always using different guns, it’s just the method that works every time. If you carry one type of gun and use it near exclusively, you’ll probably benefit from using the slide release method. It’s faster and you get to keep the use of your support hand for other purposes. Like most debates in the gunnie world, there’s rarely a single right answer for everyone. It almost always depends on your specific circumstances.