Pack a Punch with the SIG P365 15 Round Magazine (Review) 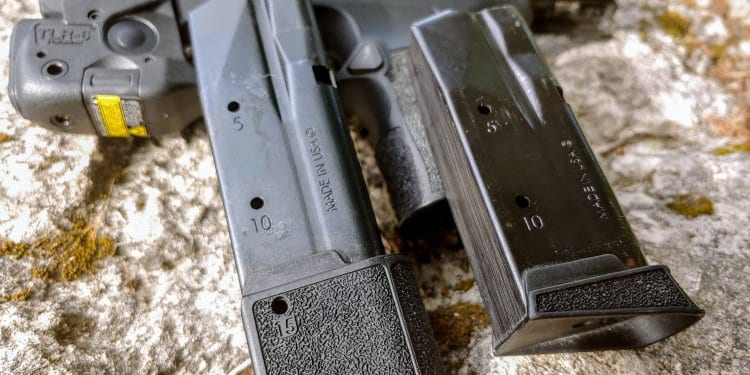 I’ve been carrying the SIG P365 for over a year now and it’s been one of the most comfortable carrying guns I’ve ever used. The magazine and its capacity have been one of the biggest selling points. It’s a gun that holds 10 rounds in a remarkably efficient way. In guns of comparative size, you’d see a capacity of 6 to 7 rounds. The guys and gals at SIG found a way to shove 10 rounds into that same amount of space. Upon the release of the P365, there was also a 12 round magazine available for sale. Now, with the announcement of the P365 XL we have a 15 round magazine available for the P365. As you’d expect it works in the standard P365 quite well. 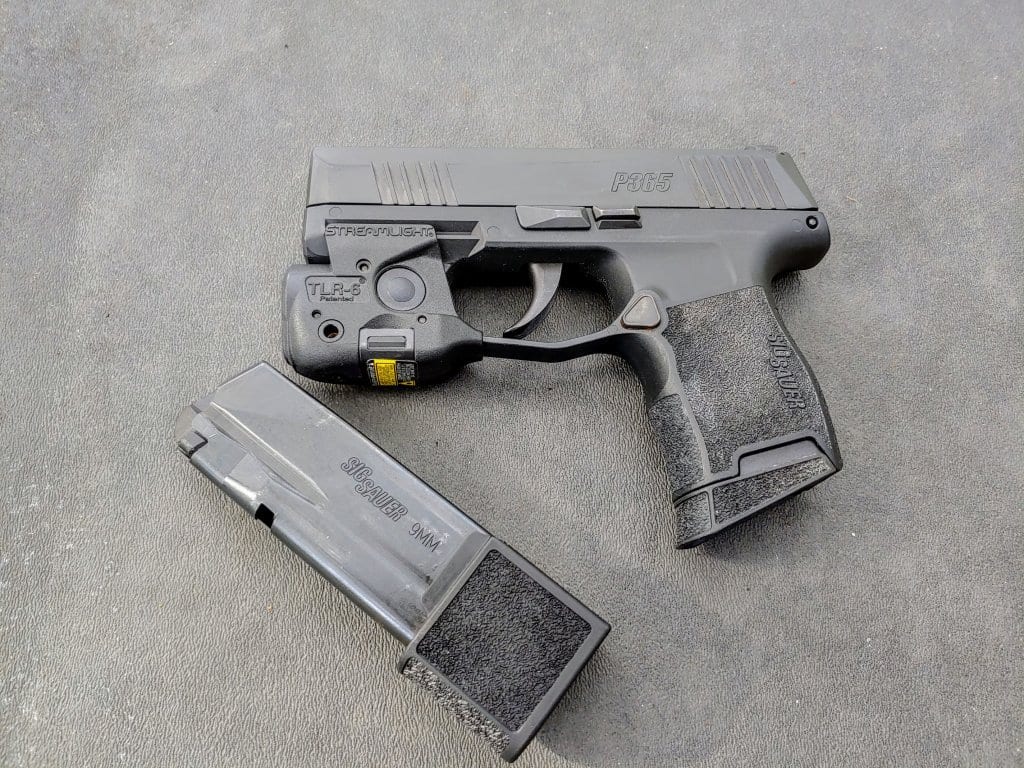 Why is it a Great Backup?

There are a number of reasons why the 15 rounder works better as a backup. As I mentioned above the point of the SIG P365 is to be small and easily concealed. Since its a larger magazine it would make the weapon harder to conceal. That extra inch or so negates the difference carrying such a small gun makes. This is why it’s not my main go-to magazine.

If I’m ever in the position where I need to change my magazine I’m not concerned about concealment. Being realistic I’m not likely to swap mags because I’ve run out of ammo. Most gunfights don’t last that long. If I swap mags it’s likely due to a malfunction. In this situation why not get a complete reload plus 50% more ammo? The same could be said for that 1 in a million chance that you have to reload because you’ve run dry. In that situation extra ammo is even more attractive. 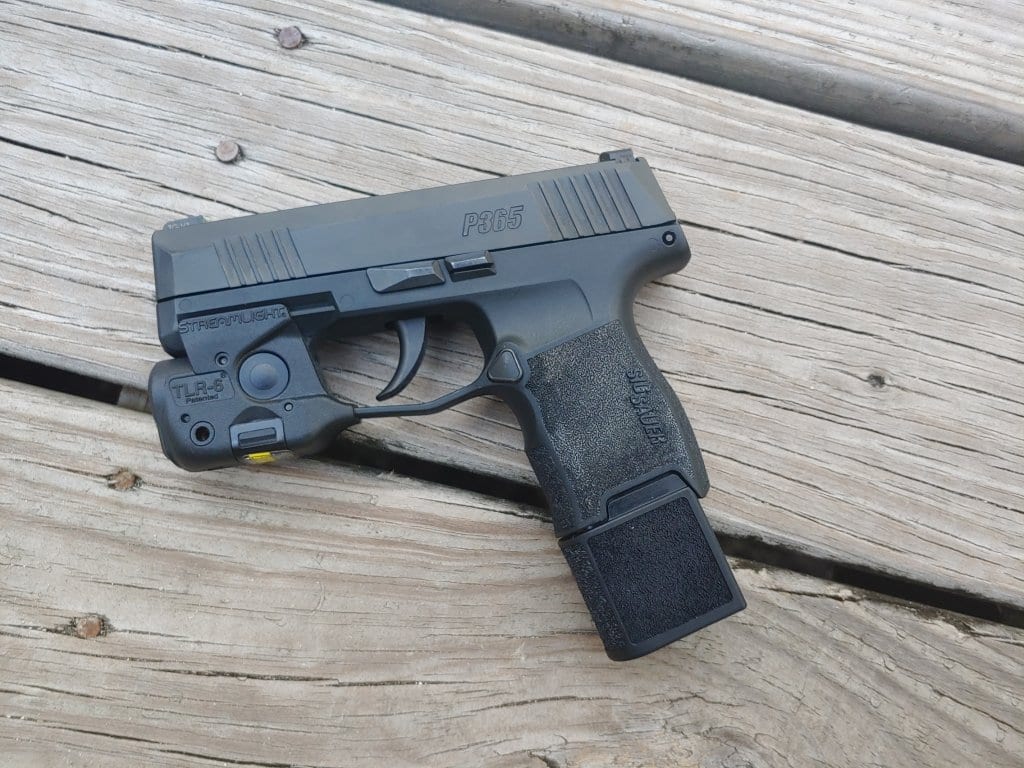 Also, because the magazine is larger, it’s easier to grab, it’s easier to reload, and easier to manipulate overall. It’s very easy to grip and easier to work as a reload than a shorter magazine. That’s one of the biggest draws to me. When I try to reload with one of the 10 round magazines, I feel clumsy and slow because my big palms and fat fingers often get in the way. 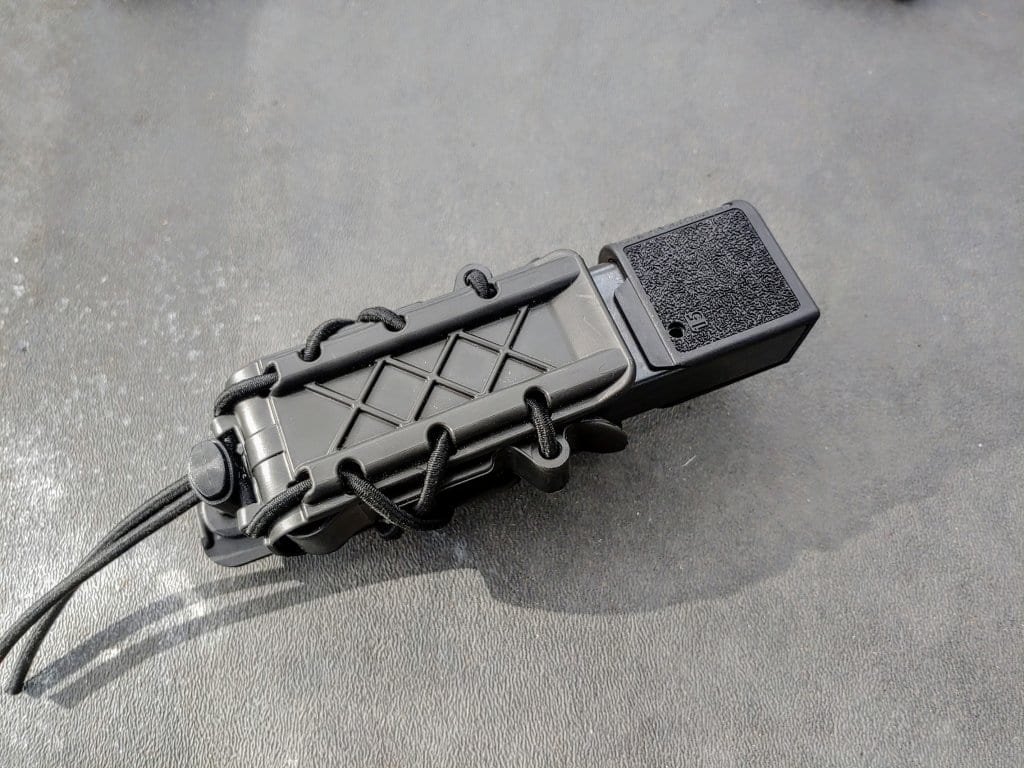 15 Rounder in the Polymer TACO 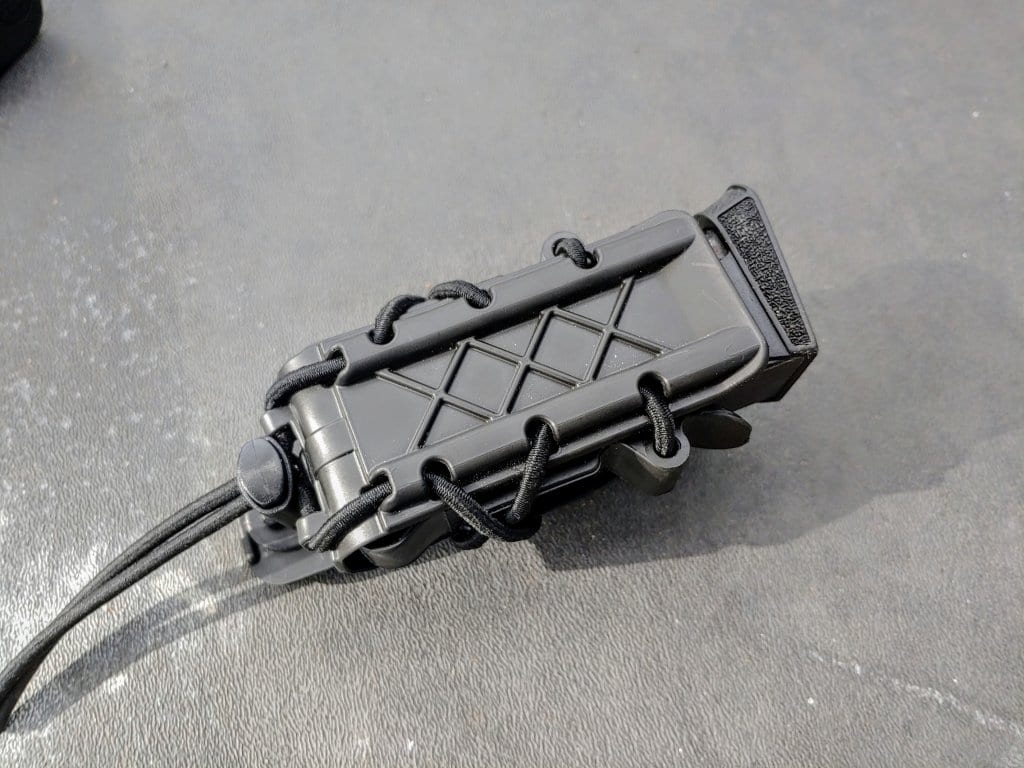 10 rounder in the same Polymer TACO

Admittedly the P365 has a weird magazine. It’s too thick to be a single stack but too thin to be a doublestack. It makes finding mag pouches hard, but I found the Polymer TACOs to be a perfect fit. It expands to fit the magazine regardless of its size. This ensures proper retention which is a must-have for a spare magazine.

How It Rocks and Rolls in the SIG P365

As a SIG OEM magazine, I expect the highest level of quality. As you’d imagine you get it with this magazine. It is very well made. It’s reliable and feeds like a champ. SIG couldn’t afford to fail in the realm of magazines with the P365. When what sets your gun apart is its magazine design you can’t mess that up. It does run cleanly and doesn’t hiccup when it is run hard. The lower base plate is heavily textured and that texturing is identical to the SIG P365’s grip. It fits well and looks clean. 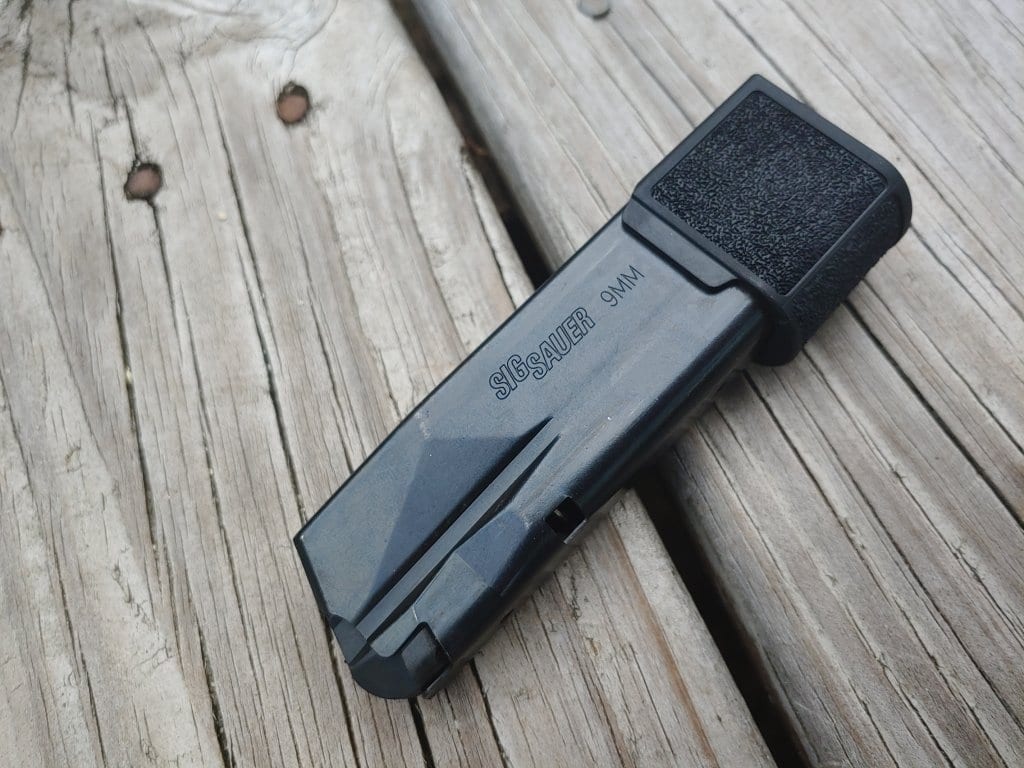 It also provides a healthy extension to the grip. The P365’s standard grip is almost hand filling. It’s at least better than most subcompacts. The 15 round magazine gives you a full-sized grip on a very small gun. The more grip on the gun the more control you have over it. On the range, it acts as training wheels for this small gun. It makes it easier to run and to shoot. When it comes to shooting rapidly that extra grip counts for a lot of control, and the same can be said for one-handed shooting. 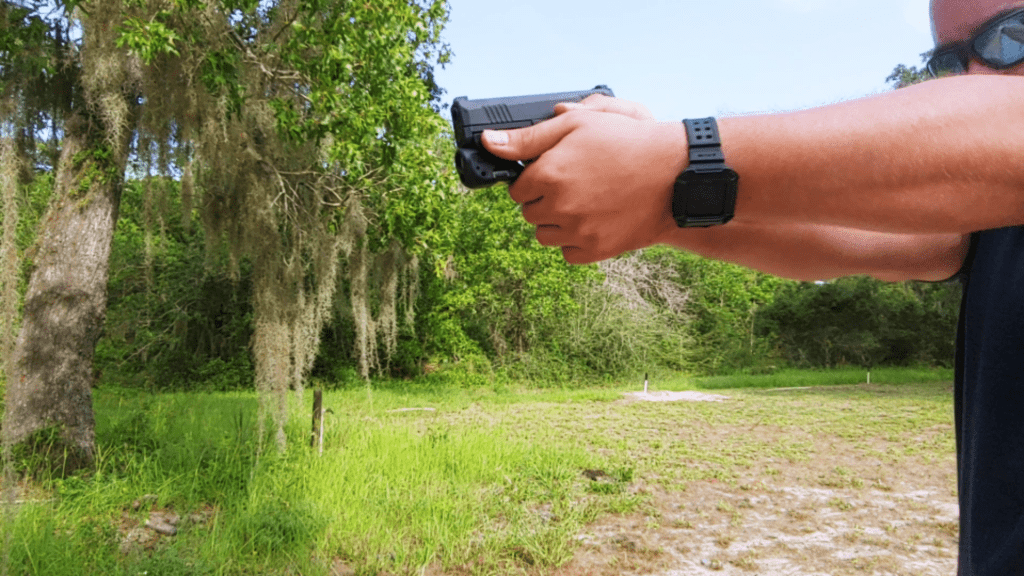 My main complaint is how hard it is to load. Not just the last round, but every round. This mag is exceptionally stiff. The last round is the worst and a mag loader might be a wise investment for high volume days.

I’m glad SIG is expanding on this platform. I can’t wait to get my hands on the P365 XL and I also can’t wait to see how they expand on the grip modules, magazines, and slides. The P365 stands to be the most modular subcompact handgun on the market and the magazines will play a heavy role in that modularity. 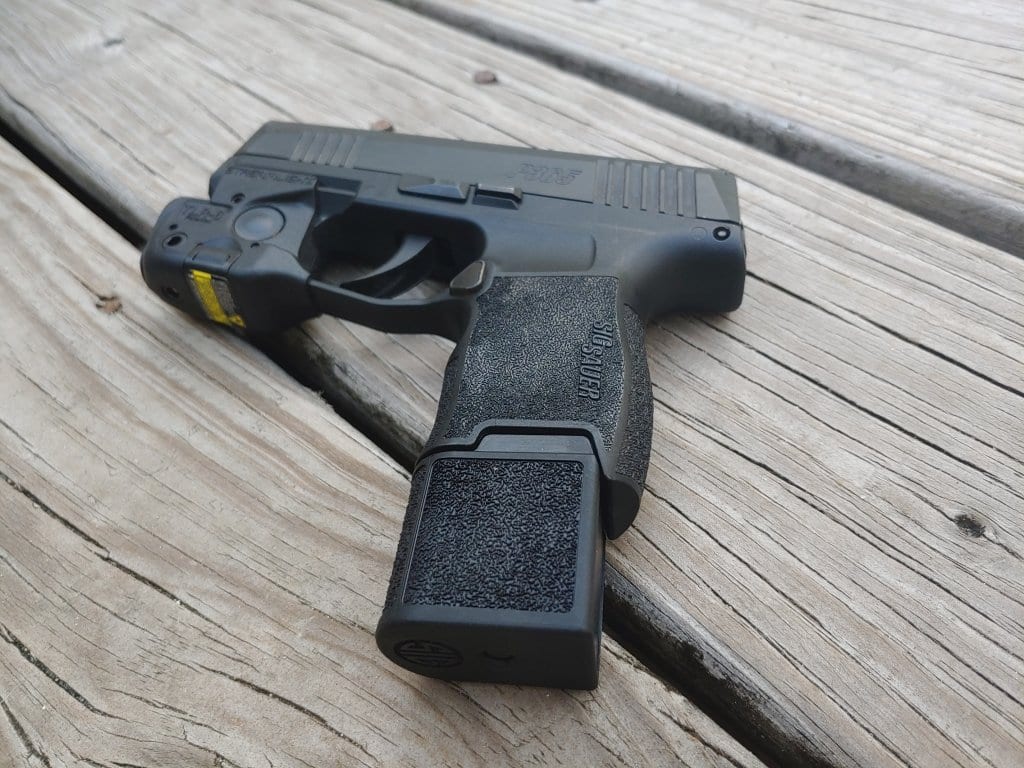 The Overall Fit is Clean

Want your own SIG P365 15 round magazine? Well, grab one here. Also, check out the TACO mag pouches if you want to carry it.