Franklin Armory has been creating binary triggers for a while now. However, this is their first binary trigger specifically made for the Glock. Coming with an entire slide and trigger, this trigger will not interfere with hooded holsters and is very attractive in appearance. With the third/binary position being located on the slide it is easy to reach and manipulate no matter what configuration you are running your Glock in, i.e. with a brace or not. Note that there are three positions: semi, safe, and binary. That safe position allows users to cancel their second binary round, the round fired on the reset. 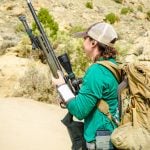