At Shot Show I came across Aimshot’s booth and they had something that intrigued me. It was a wireless remote controlled laser and light. Typically when using a weapon light or weapon laser shooters have two options with activating them. Either they directly push the onboard on button or use some sort of remote switch. All the remote switches are some form of pig tail tape switch. That is until now. Aimshot’s laser and light come with their respective paired remote switches. 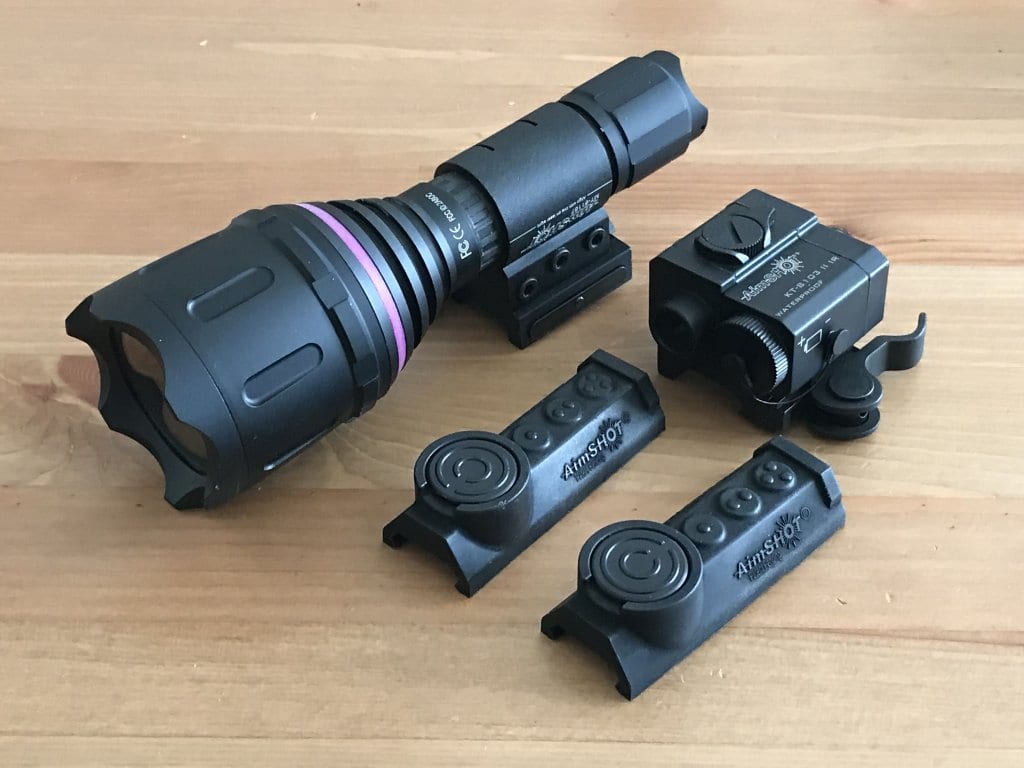 The large circular protrusion is just the battery cap. The three nubs to the left of it, in the photo below, are the actual buttons. 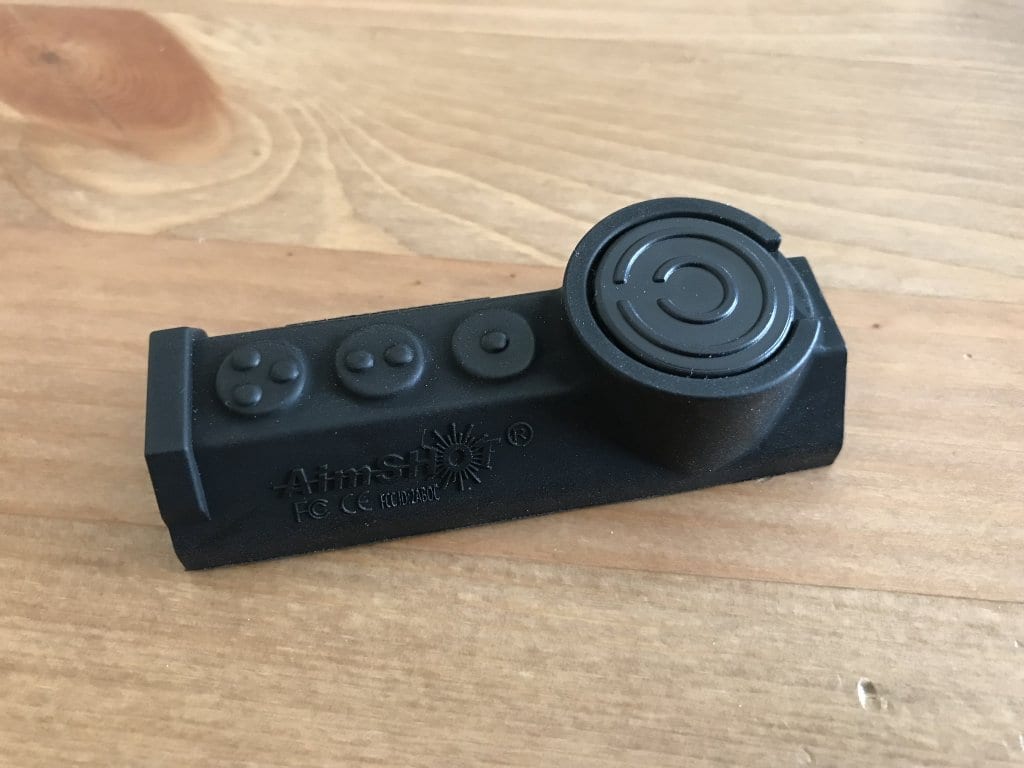 The back of the laser has a manual on/off switch that must be activated first. Then you can push the built in flush circular button you see next to it. Or push the first button on the wireless remote. This will turn on the laser and leave it on. Pushing either button 2 or 3 will momentarily turn on the laser. 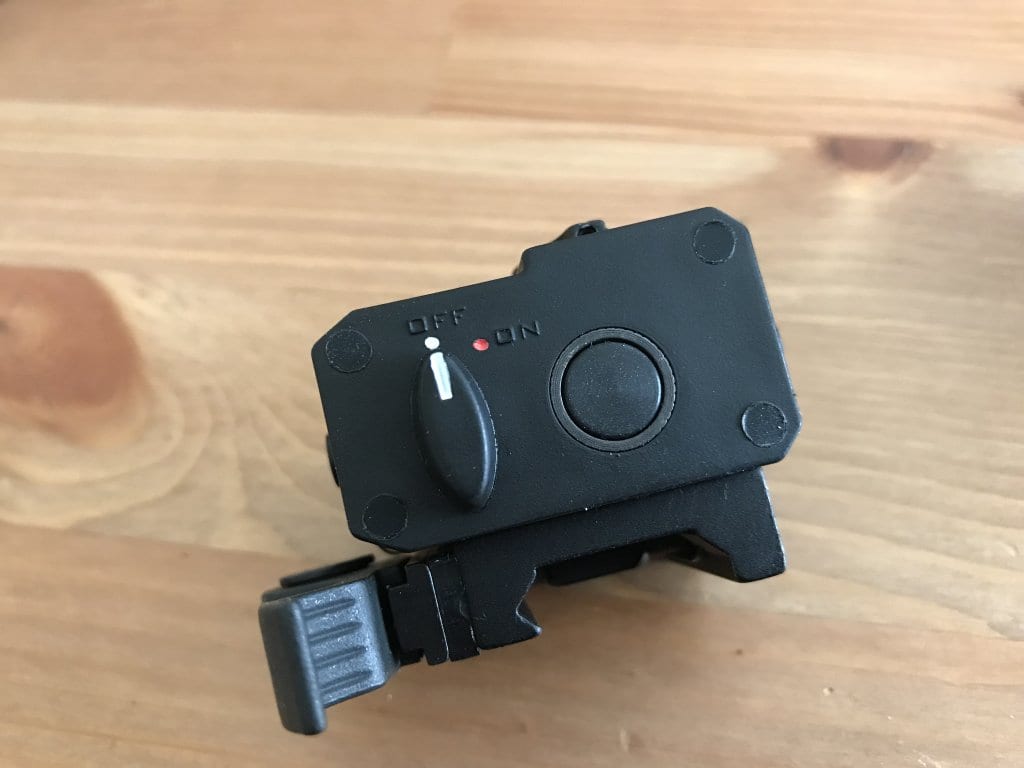 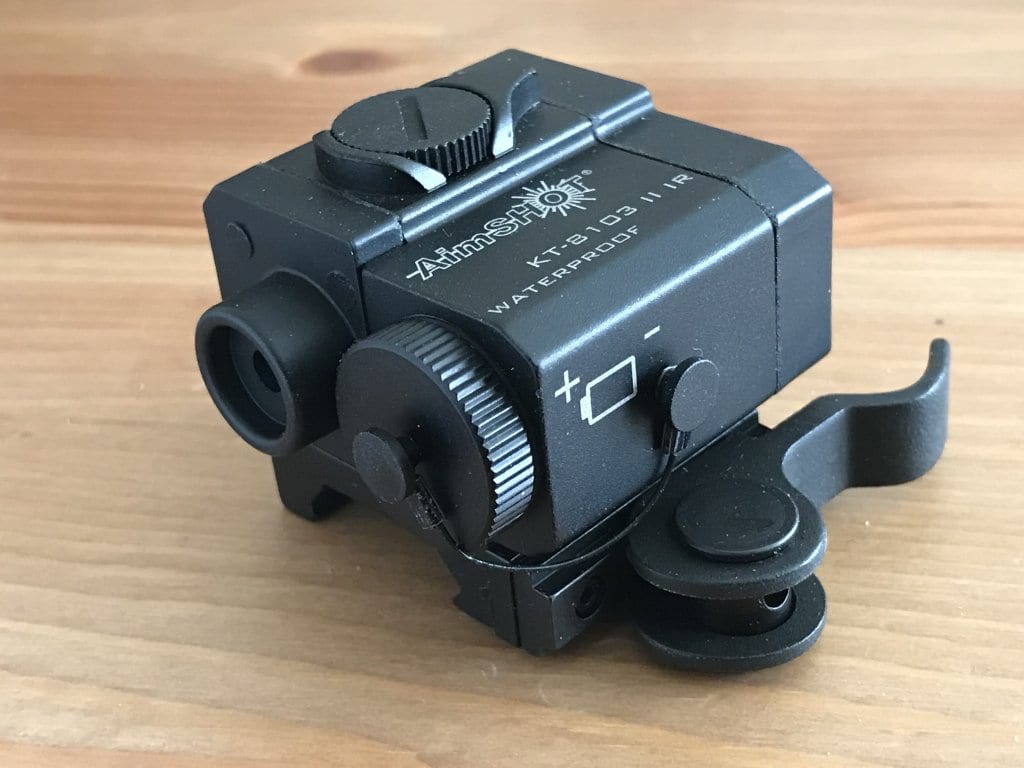 Due to the compact size of the Aimshot laser, it uses a CR2 lithium ion battery. I would have preferred a CR123 even if it means making the battery housing just a little bit bigger. 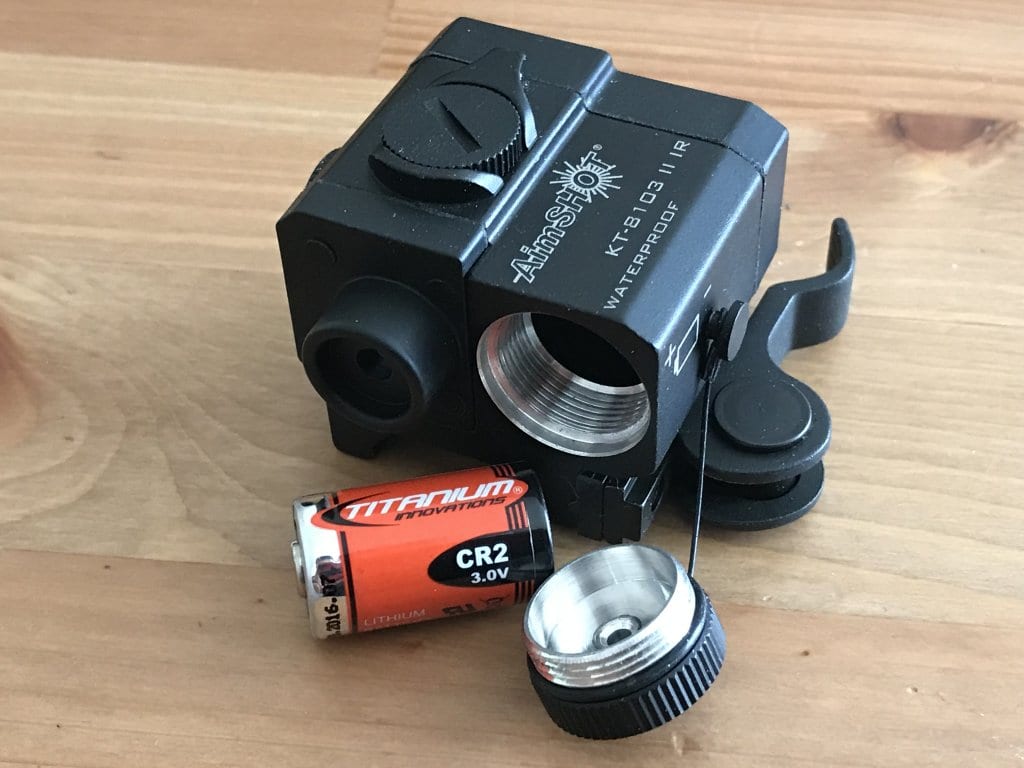 The Aimshot light can be powered by two CR123. You just need to use the included battery spacer when using CR123s. Otherwise you can use a rechargeable 18650 lithium ion battery for longer run times. 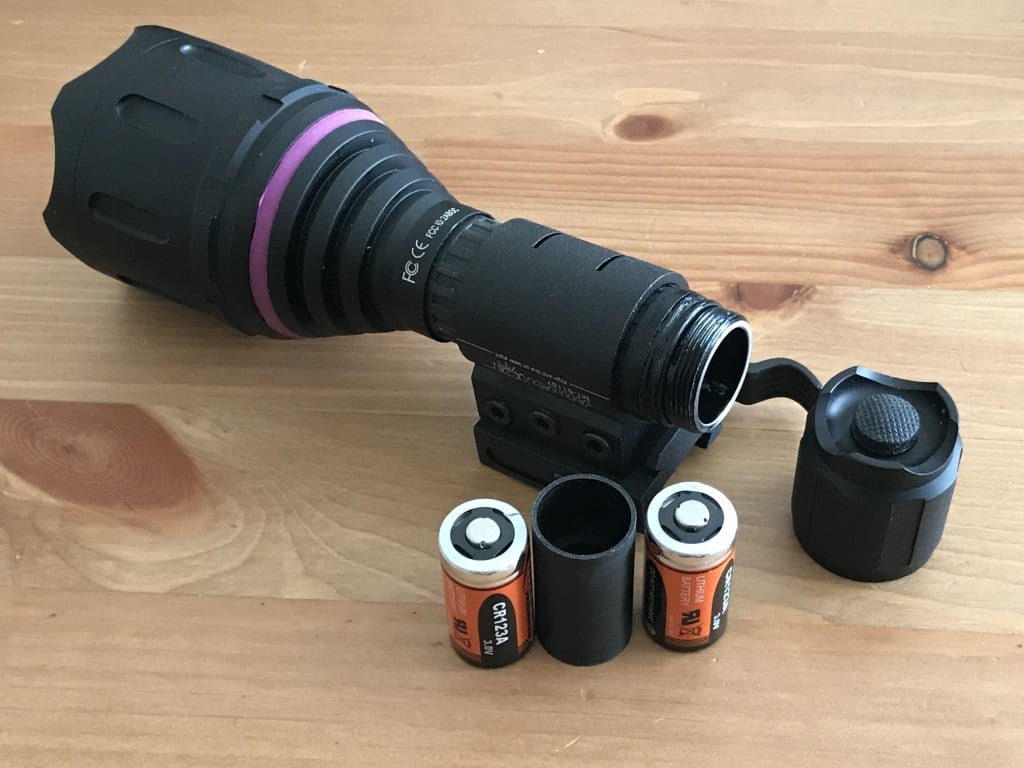 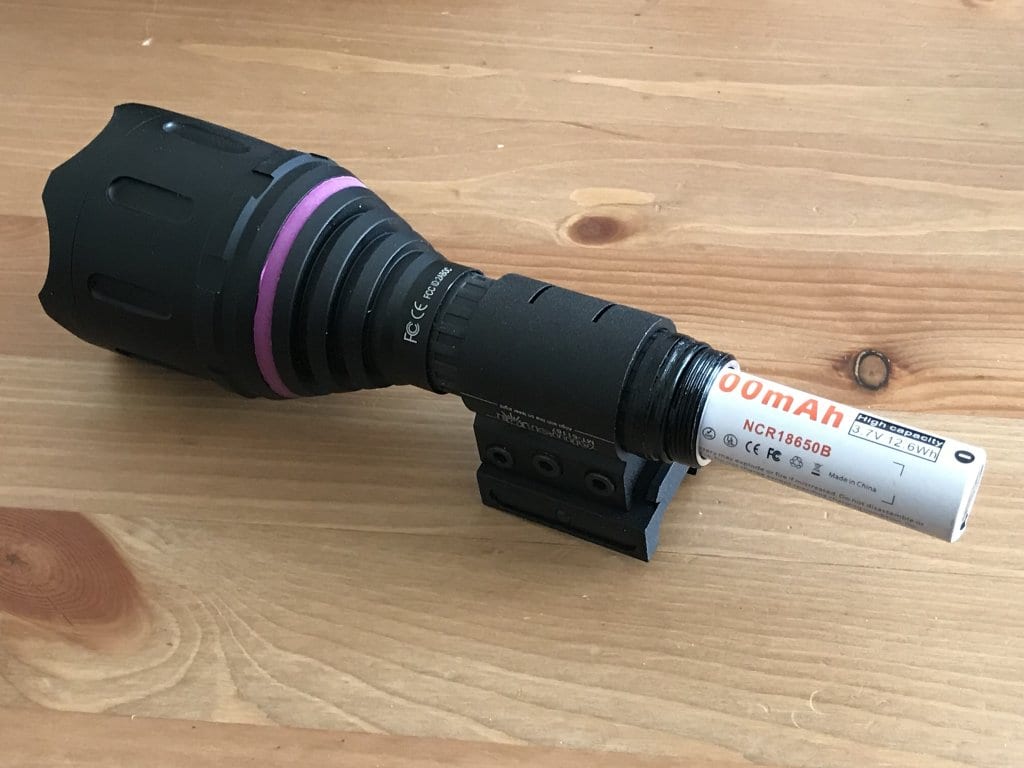 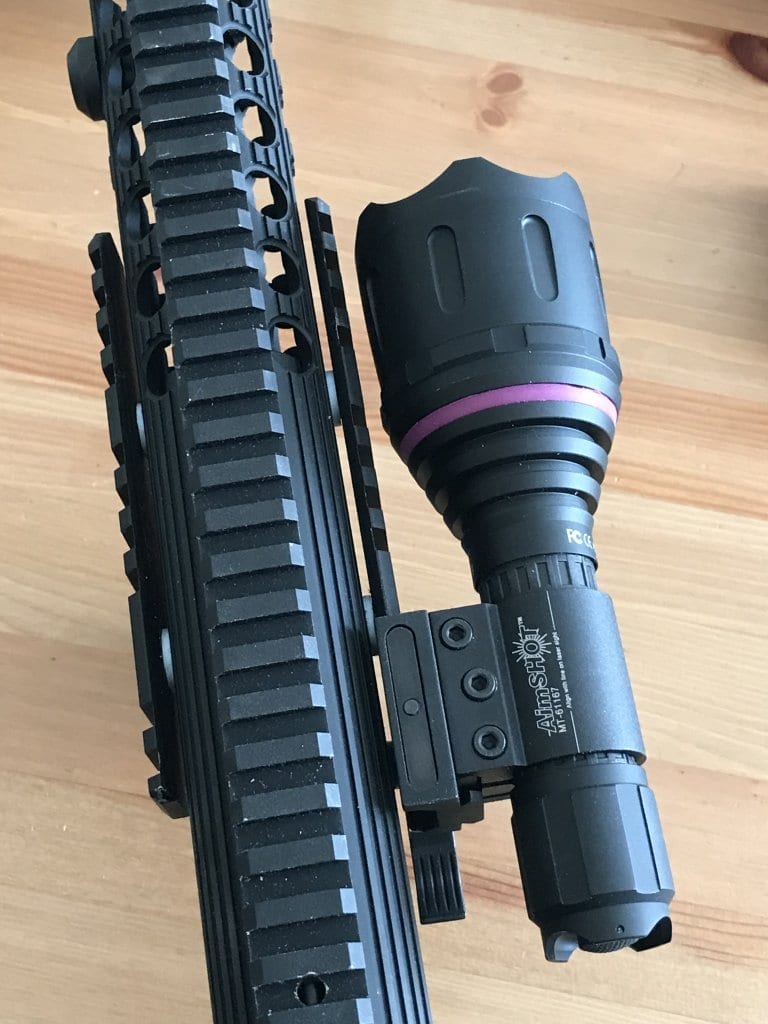 Why would you want a wireless remote controlled laser? Well, because it is wireless. As I said earlier, most weapon lights and lasers that have remote activation have some form of tethered activation which means wires. This involves using zipties or some mechanical form of wire management. However while this is usually a minor compromise on a weapon, it is nice not having wires for odd setups. For example I have have the laser mounted to the right side of my Micro Roni and the remote attached to the left side picatinny rail. I can remotely activate the laser and not have any wires running under or over the Micro Roni chassis.

Here is a video of the IR laser activation with remote.

Just as a test, I mounted the wireless IR laser to my helmet and activated the laser with the wireless remote.

The IR laser works great but the light leaves a lot to be desired. I got it because of the zoomable head, thinking I could focus the beam pattern and illuminate objects further down range. While the head does zoom and focus the light, the problem is the IR light is produced by a 4 element LED.  See the video below. The zoomed in beam pattern ends up being four really bright squares. This is distracting and not that useful. 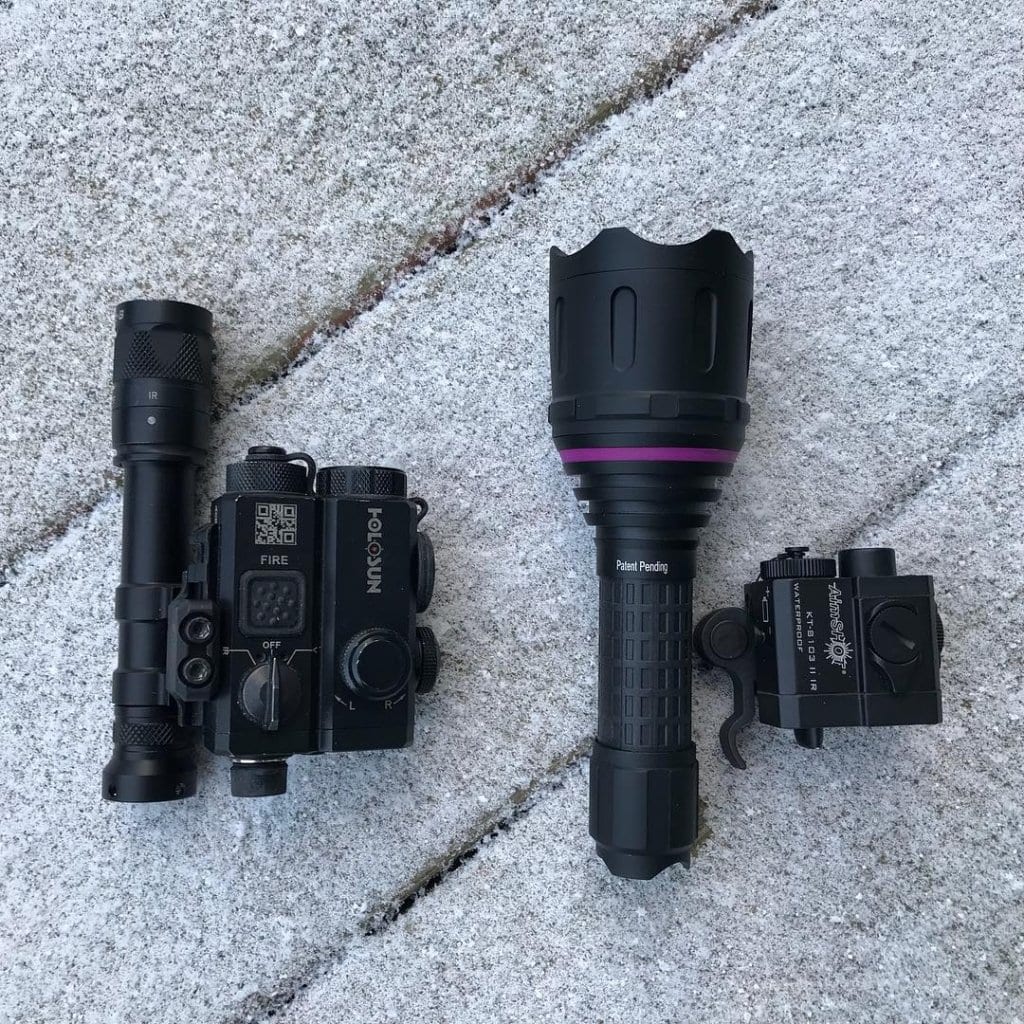 For my needs, I can use the IR laser. I did not find the light to suit my needs. Its size and weight is too much of a compromise for lack luster performance. If the light was able to illuminate long distances like 200-300 yards then it would be worth it, but it doesn’t.  The laser could be smaller or more low profile otherwise I think it should be powered by a CR123. Having a wireless remote for it is handy if you are mounting the laser in a position that makes it difficult to use normal button activation or a wired tape switch.  The light retails for $200 and the laser retails for $225. You can order them in visible or infrared versions.