The devastating power of a shotgun has never been in dispute. From the lawmen of the old west to the US Marine serving today, the shotgun has been a go-to firearm for combat and special applications. From the mighty 12-gauge to the often underestimated .410 bore, the shotgun can be a decisive tool in any deadly force encounter A detachable shotgun magazine greatly increases the effectiveness of a combat rifle, and it can do the same for the trusty scattergun. Probably the best-known example is the Saiga 12 shotgun. However, that gun is no longer imported into the US for the commercial market.

That doesn’t mean you are completely out of luck. The following manufacturers offer production shotguns and conversion kits to give you the increased flexibility and firepower that a detachable shotgun magazine can provide. 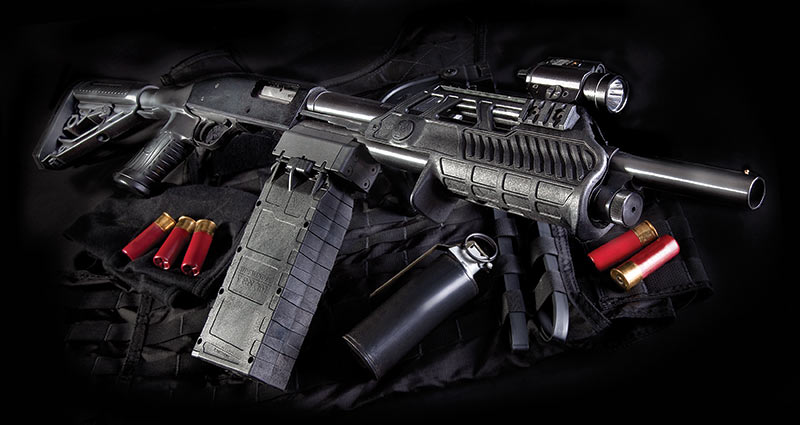 Developed for the Mossberg 500, 590, and twin action bar Maverick 88 shotguns, the Sidewinder Venom conversion kit allows a shooter to use 5- and 10-round detachable magazines. Developed by a team with a rich background in developing shotgun components, Adaptive Tactical guarantees reliable feeding with these high-strength polymer and alloy kits.

Sidewinder Venom kits can be had with both box-style and rotary drum-style magazines. In addition to standard black, the company offers kits in camouflage patterns including MultiCam and Kryptek  Highlander. While the kits can be installed by most shooters, Adaptive Tactical also offers professional installation services.

The AR platform has proved to be extremely versatile and easy to operate efficiently. American Tactical has taken the basic AR design and turned it into a short-stroke piston shotgun chambered in .410 bore. The shotgun has a 6-position stock and a 10” free-floated quad rail. Five and 15-round proprietary magazines are available for the gun.

While the shotgun will run with a range of .410 loads, including birdshot, buckshot, and slugs, American Tactical has done extensive testing with 2.5” Hornady Critical Defense ammunition. Those loads run very smoothly in this gun and each delivers an FTX slug plus a pair of .35-caliber lead balls. 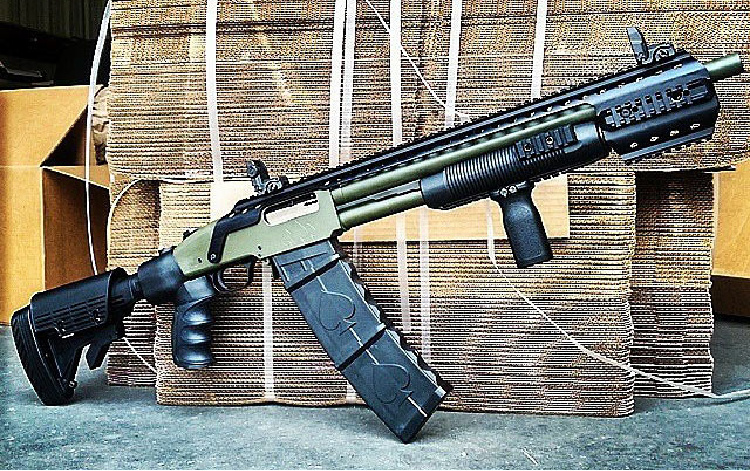 Hand-tuned and fitted with top-shelf components, the Black Aces Tactical Pro Series Street 12-gauge shotguns feed from the company’s own patented Stack Mags. All internals are hand polished, making these guns super slick. Magpul sights and vertical grips are standard. A Black Aces Tactical RB7M quad rail allows the shooter to add any number of accessories including a supplemental aiming laser and white light. The buttstock is an ATI Talon that adjusts for length of pull and folds for easier storage and carry. To finish the gun off, the company offers a range of Cerakote colors.

Inspired by the AK platform, the Catamount Fury II from Century Arms is a piston-driven 12-gauge shotgun that can handle both low- and high-pressure ammunition. Both 2.75” and 3” shells will run reliably in these semi-automatic shotguns. Each gun ships with a pair of 5-round magazines plus a 10-round mag. A short Picatinny rail under the gas block allows for the addition of a white light or other accessory, while another rail on the top of the receiver allows for the easy installation of a red dot or other optic. Included with the shotgun are three choke tubes: full, modified, and cylinder bore.

Styled after the AR-15, the MKA 1919 Match is a semi-automatic shotgun designed for law enforcement, home defense, and sporting use. Chambered in 12-gauge, the shotgun comes with two 5-round magazines and handles both 2.75” and 3” shells.

Imported by European Armory Corporation, these guns have a fixed length stock, ambidextrous safety, and extended bolt and magazine releases. Three internal choke tubes are included with this rifle. A Pro version of this shotgun adds an aluminum forearm that has Picatinny rails for the addition of a tactical light or laser. 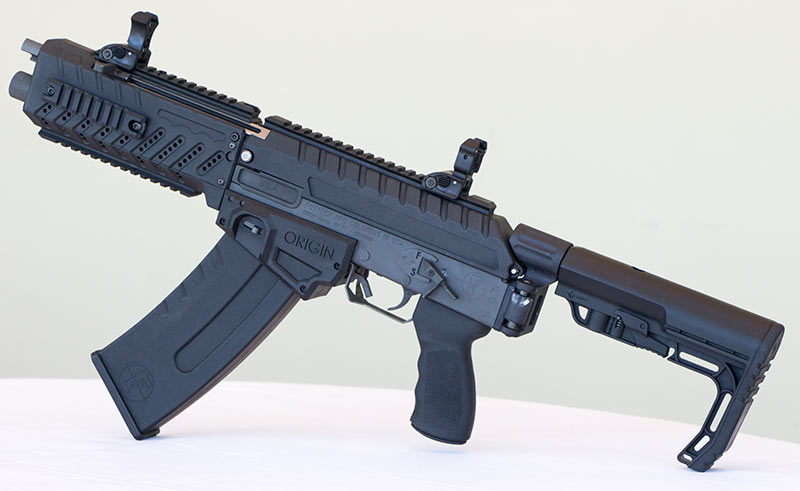 The Origin-12 shotgun from Fostech Outdoors is a thoroughly modern semi-automatic shotgun designed for heavy duty use. This design incorporates an infinitely adjustable gas block, quick change barrel and a non-reciprocating forward charging handle. A 5-round magazine ships with the gun while 20- and 30-round drum-style magazines are also available.

Mission First Tactical provides the popular Minimalist stock for these shotguns. An ambidextrous safety and magazine release makes the gun easy to use regardless of what shoulder the shooter uses. With a full length Picatinny rail, adding rifle sights or a red dot is quick and easy.

Based on the rugged AK-47 design, the US109T semi-automatic shotgun from Kalashnikov USA (formerly RWC Group) uses a gas piston system with an enlarged port and block for increased reliability with a wide range of loads. Combined with the proprietary muzzle brake, the system significantly reduces the felt recoil of heavy-duty 12-gauge rounds.

This shotgun uses a 10-round box shotgun magazine. A 6-position adjustable buttstock has a rubber cheek weld and butt pad to increase control and comfort while shooting. Kalashnikov USA uses a pistol grip that has interchangeable backstraps and finger grooves to best fit the shooter’s hand.

These guns were announced some time ago, but have never made it into full production. K-USA has stated they should be shipping in the Spring of 2017.

The BR-99 is an AR-style shotgun made in Turkey by Uzkon Arms Ltd. These semi-automatic shotguns are chambered in 12 gauge and will take both 2.75” and 3” shells. A self-adjusting gas system allows the shooter to run a range of loads reliably when the gun is shouldered. Imported by Federal Armament, the BR-99 ships with a pair of 5-round magazines with 10-round magazines as an optional accessory. Adjustable sights attached to a full length Picatinny rail ship with the BR-99, but they are removable for the addition of your choice in sighting systems.

With a different take on the detachable magazine, the Model 1216 from SRM Arms uses a rotary mag that can hold up to 16 rounds in a very compact package. Shooting from a prone position is not a problem with the 1216. This shotgun is semi-automatic and uses a roller delayed action for reliability, minimal recoil and fast cycling. The ambidextrous receiver can be efficiently run by both right- and left-handed operators. All kinds of bird, buck, and slugs will run reliably in the 1216. Additionally, specialty rounds like bean bags operate normally in this shotgun.