My defensive AR-15 is on duty for home defense 24/7 and I have it set up to work as efficiently as possible.  It has a fully loaded Magpul PMAG inserted and the bolt is closed on an empty chamber. A Trijicon MRO sits on top and an Elzetta light is mounted on the left side toward the muzzle just behind a Great Lakes Tactical Commander Muzzle break. The rifle also has an ambidextrous safety and a Magpul BAD Lever. 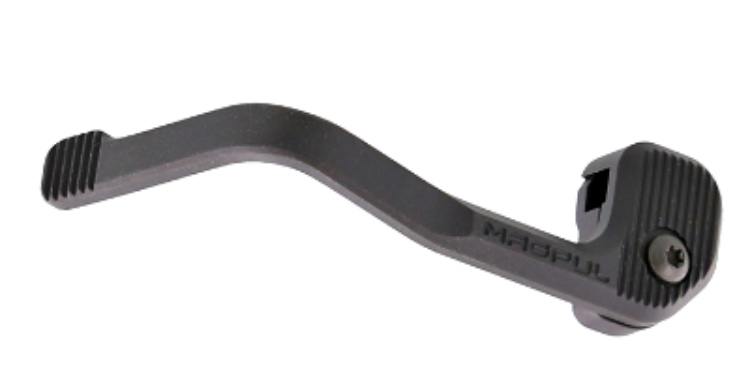 The Battery Assist Device (BAD) Lever is the part of my rifle that gets the most cheers and jeers for sure.  It attaches to the bolt catch paddle on the left side of the rifle and extends down the receiver and then through the trigger guard to the right side of the rifle.  It’s a bit ugly and it has lots of people worried when they see it on my gun.

Why BAD Levers Have a Bad Reputation

The bad reputation of the Battery Assist Device comes from the fact that it passes through the trigger guard and the idea that it encourages your trigger finger to do more than one thing.  I can see why folks are a bit worried about both these aspects of the bad lever.

Your trigger finger has an important job to do and this is the second big reason people get worked up about the BAD Lever. Your finger either needs to be pressing the trigger or not pressing the trigger and both of those tasks are critically important when they need to be done. Adding any additional work to an already overworked and under-compensated finger can be a bad deal.

And so, the bad rep of this little lever and those like it persists with little consideration for the upside of the BAD Lever.

So let’s explore that side of the argument.

Why I want a BAD Lever on my AR

The reason is simple.  I want a BAD lever to help me deal with complex malfunctions where the bolt needs to be locked to the rear. If you have spent any time with the AR15 you probably know two things;

How I Use my BAD Lever

The way I use it is simple. Any time I need to lock my bolt to the rear, I use my trigger finger to press the BAD Lever up while I draw the charging handle to the rear. This locks the bolt to the rear while keeping my firing hand in position on the rifle. Some folks use the BAD lever to send the bolt home on a reload. I don’t. I don’t find the standard methods of releasing the bolts to be a problem. The tool is simply for helping me to easily and quickly lock the bolt to the rear.

The fact that I only use the tool to lock the bolt to there rear means I only use it when I am not firing the gun. This simplifies the work that my trigger finger has to do and only employs it when it isn’t getting ready to shoot.

I recently wrote an article about the American Defense Manufacturing UIC Ambidextrous AR lower. It would eliminate the need for a BAD Lever. I don’t have one (yet) and I certainly think it is a more elegant solution.

At the same time, the two products achieve the same goal. They both improve the manual of arms used to operate the AR15.  It isn’t often that more hardware simplifies things, but, in my opinion, the BAD Lever and the UIC are tools that can really make the operation of our defensive rifles more simple.

What are your thoughts on the BAD Lever?

From Skorpion to Scorpion: A History Of Sting

3 thoughts on “My Magpul BAD Lever — the How and Why”