Modern Warfare guns….Call of Duty weapons…they’re often talked about, but usually only within the context of gameplay. CoD as a series has had an interesting lifespan. Sure, over the years, they’ve released some genuinely wonderful games. Many of them are, for games, remarkably authentic experiences. They’ve also released games no one remembers. For example, do you remember Call of Duty Ghosts? No? Me neither. The latest Call of Duty takes on the Modern Warfare moniker once more as if to promise a return to the greatness of the previous Call of Duty games — and happily, they seem to be making good on that promise.

So what about the weapons? There are plenty of articles telling you what the best guns of Call of Duty in the game are, within the game. You probably already know that there are six primary gun categories: assault rifles, submachine guns, shotguns, machine guns, tactical rifles, and sniper rifles. And then, COD also has two categories for secondary weapons that include handguns and launchers. Today though, I’m going to talk about the best guns from Modern Warfare that are actually good guns in real life.

The guns in Modern Warfare are a bit weird. They start as a base model weapon, and by using attachments, the firearms can change slightly or drastically. Some of the guns on this list are only available with attachments, so keep that in mind.

This article originally ran in February 2020.

How Did I Pick the Best Guns?

Easy, I chose them based on their reputations as firearms and their use by professional gunslingers. Successful use by police and military forces, as well as hard-earned reputations by professional shooters, is what helped these guns make a list. On top of that, I chose the best guns based on the Modern Warfare title. The Kar98 was an excellent bolt gun, but it’s not on the list because it’s far from modern.

The 9mm Glock series has been widely used by military and police forces around the world. The longer 34 has been seen in service with French Special Operations, as well as numerous police agencies. You can’t beat a Glock when it comes to an excellent working pistol.

With more and more police forces across the United States switching to 9mm, we see the rise of the SIG P320 as agencies change guns.

The MP5 is a legendary submachine gun. To understand why the weapon is legendary, you have to realize that at the time, SMGs were either big and bulky like the Thompson or cheap open bolt blowback guns. The HK MP5 was a refined weapon and still remains in service decades later. 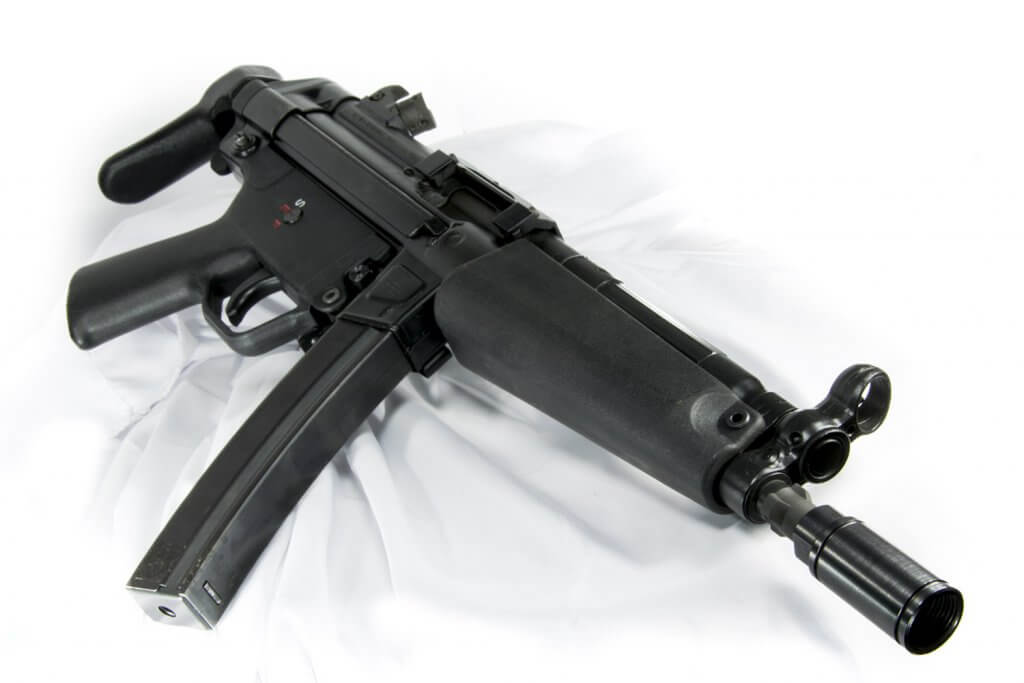 As far as real guns go, there isn’t a more proven SMG platform. It’s been used by dozens of SWAT teams, the Navy SEALs, the SAS, Force Recon, and the list just keeps going on. In Modern Warfare, you get attachments to use a variety of MP5s, including the A3, A2, SD model, and the 10mm variant.

The MP7 is the successor to the MP5, and its more of a PDW than an SMG, but those lines are blurred. This little gun uses a unique 4.6m round that punches through soft armor with ease. 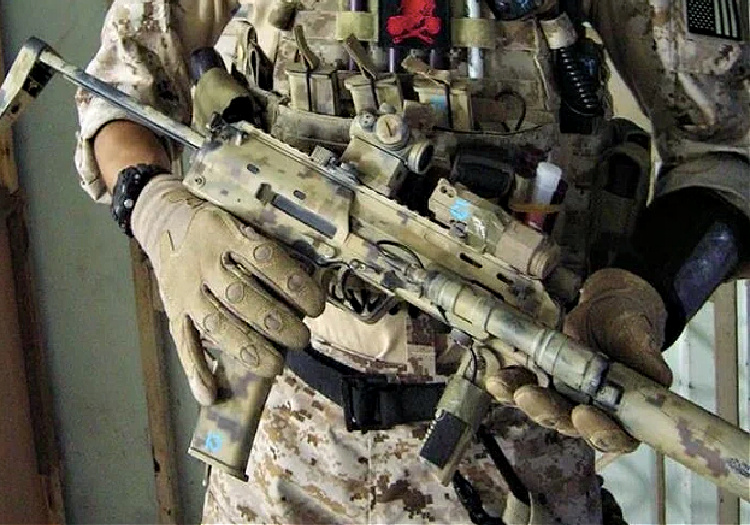 The MP7 has since been adopted by various special operations forces around the world, including the SAS, Navy SEALs, Spetsnaz, the Swiss Guard, and literally dozens of other forces. The MP7 is superbly lightweight, compact, and packs a bigger punch than the traditional 9mm SMG.

Real talk about tactics, violence, and leadership — podcasts and online gaming for those of you who are into that.

It’s hard to find a shotgun more tested by fire than the Remington 870, the Mossberg 590 series might make it, but they aren’t in the game. MCS stands for Modular Combat Shotgun, and it allows you to move from a full-sized combat shotgun to a mini breaching gun. 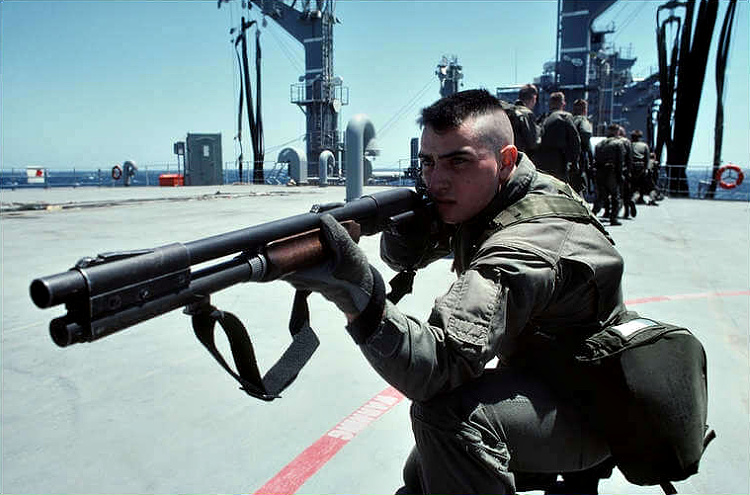 The Remington 870 has also been used by numerous countries and police forces over the last 50 years, and the 870 has earned its reputation as a close quarter’s killer.

The SCAR-H is the most modern full-powered assault rifle out there. The SCAR-L may have become a failure, but the SCAR-H has been a favorite of Special Ops troops throughout the world. 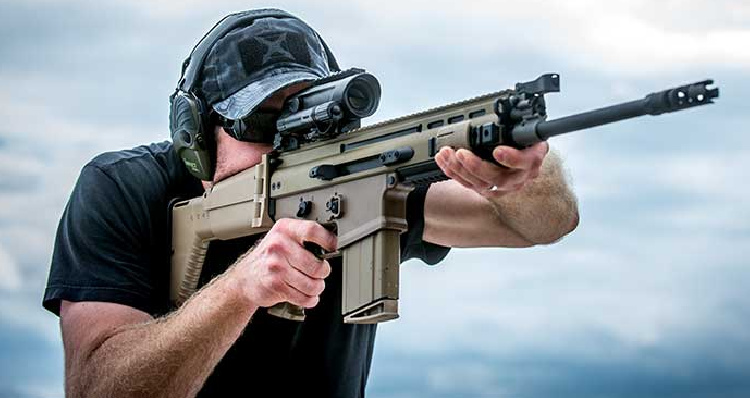 From the Marine Raiders to the Army Rangers, the SCAR-H has proven to be a powerful, accurate, and lightweight option for full-powered semi-auto. It’s compact enough to be used indoors but robust and precise enough to be a sniper rifle at intermediate ranges.

The presence of a Eugene Stoner AR-15ish design is a must-have. We have several configurations based on various AR-15/M4 variants. This includes the Colt 933, the Mk18 Mod 0, the M16A3, the Colt SMG, and even two custom AR derivatives.

These variations show one of the strengths of the Stoner platforms in terms of its modularity. The gun is extremely reliable, accurate, and has served our country for decades for a reason. As far as Modern Warfare goes, the game wouldn’t be complete without it.

If the M4 is Yin, then the AK series is its Yang. The Russian carbine is spread around the world and is known for its simplicity and reliability. It’s deadly in the hands of both conscripts and trained professionals.

The AK series in Modern Warfare comes in a few different platforms. This includes the traditional 47, the 74, the RPK, the AK 12, and a few more random configurations (and hey, you can carry virtually unlimited AK magazines).

The FAL is a bit outdated these days, but it has been used around the world for years. It’s earned the name the Right Arm of the Free World due to its disbursement over Allied countries.

The FAL is still used around the world by nations without the means to buy updated weapons. Particularly South American countries. The FN FAL was even used by British Forces up into the Afghan war in specialized roles.

The HK MG5 is one of the most modern light machine guns on the market. So far, it’s only been adopted by the Germans, but it’s a promising and sleek design.

The infantry model known as the MG5A2 weighs a mere 21 pounds, which is quite light for a medium machine gun. The MG5 is likely only beat by the new SIG M338 in terms of a modern machine gun. It’s ideally suited for the moniker Modern Warfare.

On the opposite side of the spectrum is the PKM, a simple, but rather old medium machine gun. The PKM is still one of the best guns to ever come out of the Eastern Bloc and, to this day, keeps up with more modern firearms. 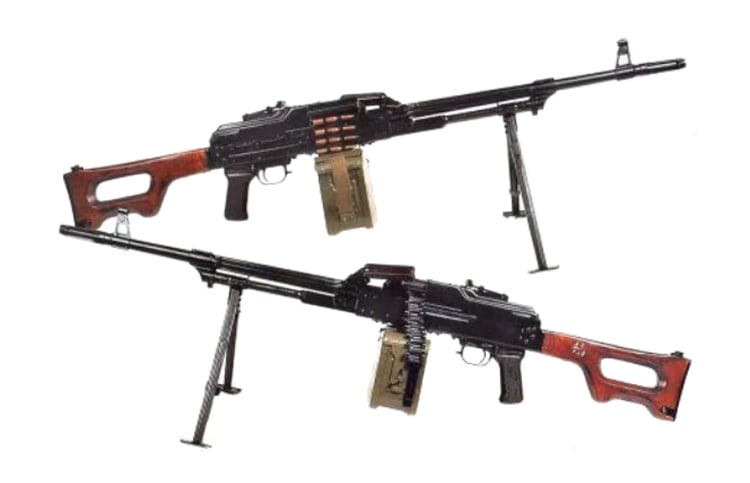 The PKM weighs less than 17 pounds, and somehow the United States sticks with 28-pound machine guns. As someone who has been on the other side of a PKM, the weapon is frighteningly accurate and capable in its role.

The Best Guns of Modern Warfare

Call of Duty Modern Warfare has a whole ton of new and old guns. It has some great guns as listed above, and it also has some weapons that are better used as novelties. IE the DP 12 and the Desert Eagle. At the end of the day, this is a video game and not real life. My favorite guns will always be the guns that were successful in real life. Firearms that have made or are currently making history will always be my first choice.

Question for the crowd

As we discuss the best modern warfare guns, let’s also talk about training. What shooting drills would you prefer to run these weapons through?

The 5 Most Bizarre AR 15s On the Market