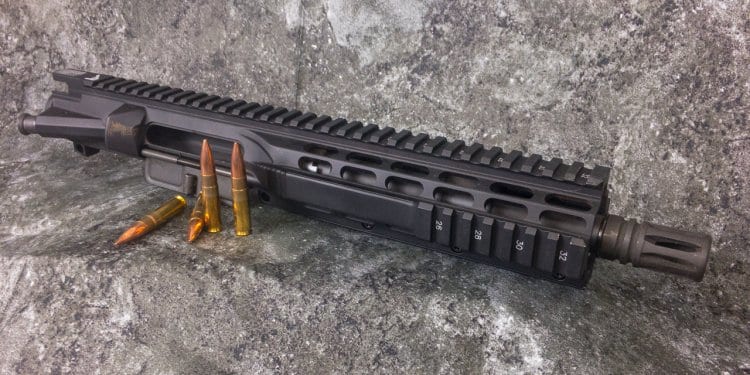 If you’re old enough to have seen the original Ghostbusters movie, you might remember this brief exchange as the final climactic scene began.

Egon: Don’t cross the streams.
Peter: Why?
Egon: It would be bad.
Peter: I’m fuzzy on the whole good/bad thing. What do you mean “bad”?
Egon: Try to imagine all life as you know it stopping instantaneously and every molecule in your body exploding at the speed of light.
Raymond: Total protonic reversal.
Peter: That’s bad. Okay. All right, important safety tip, thanks Egon.

While not as dramatic as total protonic reversal, crossing upper receivers is a very bad thing too. A couple of years ago I saw a gun at my local outdoor range inadvertently stick a magazine full of 300 Blackout rounds into an AR currently outfitted with a .223 Remington upper. You see, his buddy, the gun guy, had brought one lower and both 300 Blackout and .223 uppers along with an assortment of loaded magazines. Gun guy was shooting something else while his guest grabbed a magazine, stuffed it in the rifle, and almost saw the end of life as he knew it. 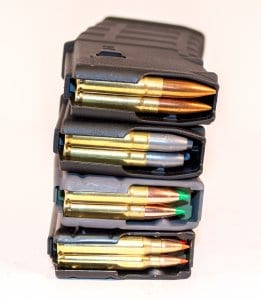 Certain .30 caliber bullets for Blackout with narrow nose profiles will fit into a .223 chamber, at least enough for the bolt to go into battery and achieve liftoff. As you might expect when said guy pulled the trigger and tried to stuff a .308 diameter object through a .224 diameter hole using 65,000 pounds per square inch of pressure, he experienced the next best thing to total protonic reversal.

The gun blew up. And I mean completely. Sure, the plastic magazine blew into tiny bits. Sure, both aluminum upper and lower receiver cracked, bent, and fragmented. What was interesting was that the barrel and barrel extension, both made of the really hard stuff, also ballooned out like Violet Beauregarde in Willy Wonka. Amazingly, after his ears stopped ringing and hands and face stopped stinging, our rookie bomb technician wasn’t injured. When I ran down the shooting line to check, he was sitting there stunned wondering what the heck had just happened.

Fortunately, there’s an easy way to engineer a safety solution if you shoot different AR-type calibers that use common magazines. You know how gas cans are always red while kerosene containers are blue? That’s an idea you can steal.

I shoot both .223 and 300 Blackout – a lot – and sometimes do the upper swap at the range. That’s why I use two different brands (and colors) of magazines. For my .223s I use standard Magpul magazines, mainly because I already have about a billion of them. They’re all black and distinctive in appearance. For my 300 Blackout use, I have standardized on Lancer L5 magazines. They not only look different as a metal and polymer hybrid, they are all flat dark earth in color. Lancer makes a few different styles, so you could go with clear or some other solid if you prefer. The important thing is that they are visibly different from the .223 magazines, and they feel different, too. 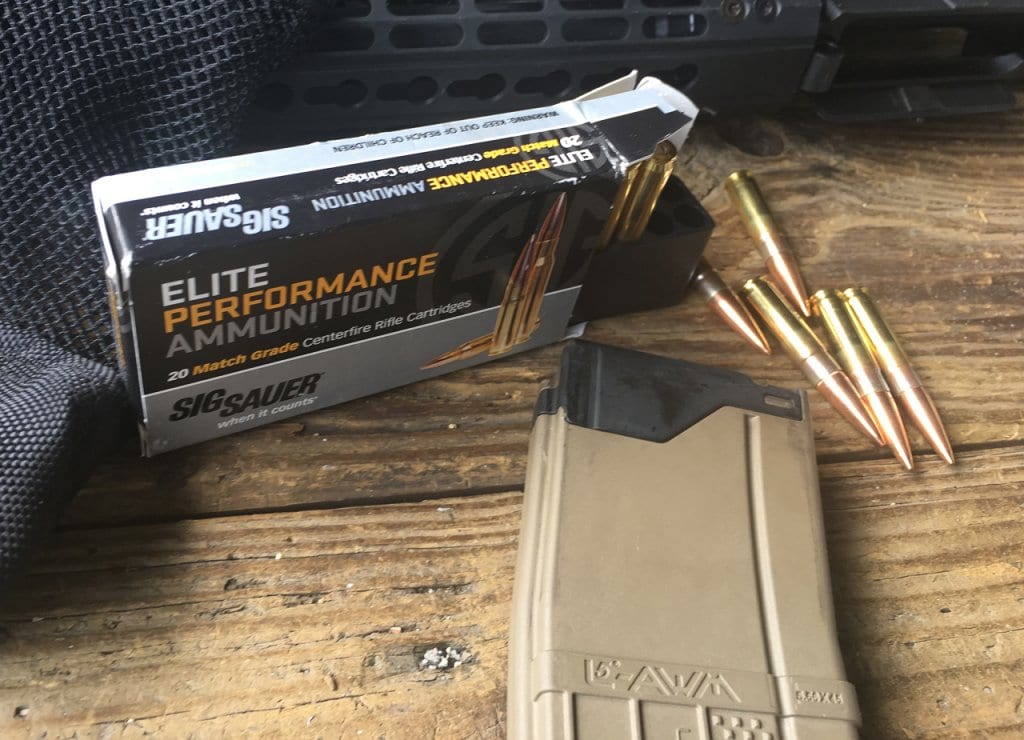 I use Lancer L5 magazines only for 300 Blackout. They feel and look different.

Here’s the really important part. I only keep .223 and 5.56mm ammo in the Magpul PMAGS. Period, paragraph, end of Hollywood awards show. I never, ever, ever put anything else in them. As you might guess, I only ever keep 300 Blackout ammo in the Lancer L5 magazines and never, ever allow anything else in there. I store them on separate shelves with their respective ammo that’s still in boxes. Integration is a great thing except when it comes to these two calibers. 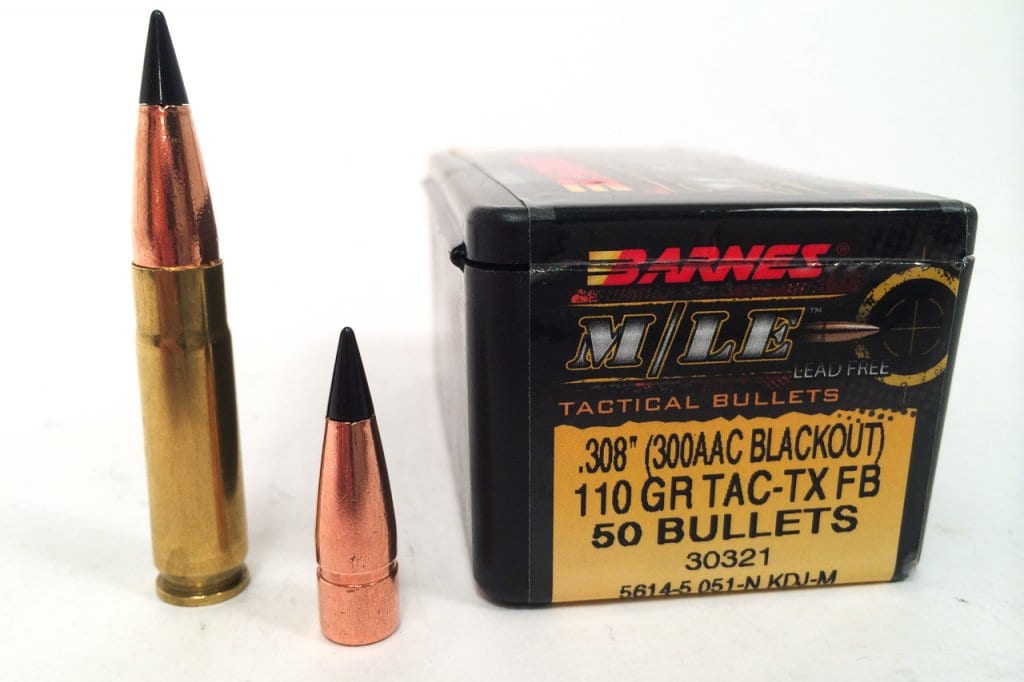 Not all 300 Blackout cartridges will fit into a .223 or 5.56 chamber, but some with the right bullet profiles will.

There are different ways to accomplish a similar result if you already have a bunch of magazines and don’t want to buy new ones.

You can try the ETS Rapid Recognition System. These are replacement followers and baseplates that come in different colors. Choose one color for each caliber and stick to it religiously. 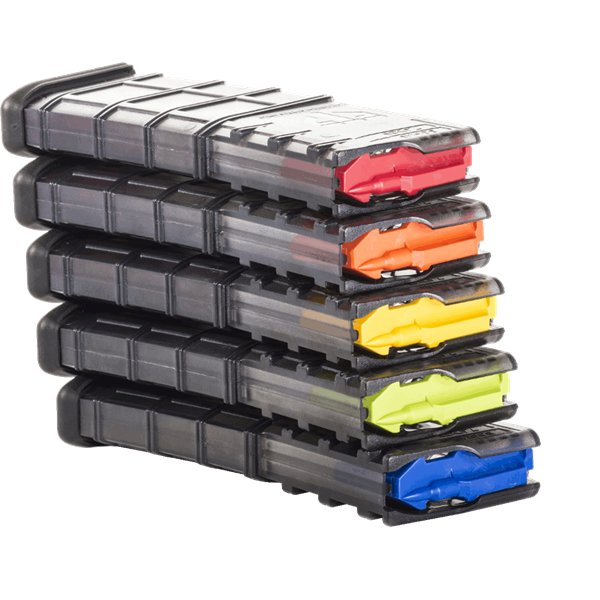 The ETS system gives you followers and bases to add to existing magazines.

You can go simple and just add original MAGPULS to your mags. Either add them to magazines for one caliber or order them in different colors if you want to use them for all calibers.

If you’re a Hexmag user, a couple of bucks will get you grip tape to fit. Use different color hex patterns to differentiate magazines for different calibers.

The goal of all of these approaches is the same: to segregate magazines and the ammo in them to reduce the possibility you’ll stuff the wrong ammo in the wrong gun. That’s bad. Really bad.