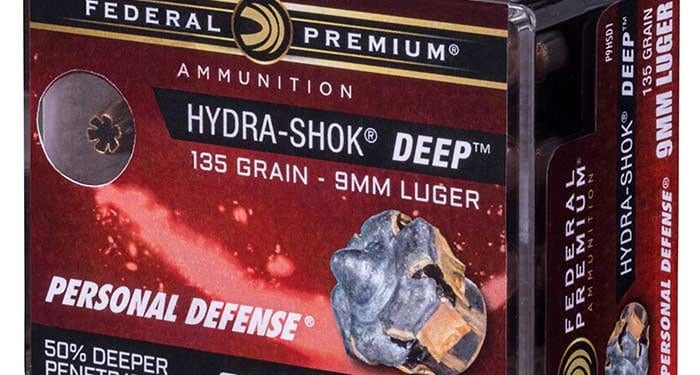 Sometimes a classic should be left alone, while other times it should be tweaked to stay relevant to the current times. For me, defensive ammunition should constantly be tested and evaluated to find ways to improve it. Just because something worked relatively well at one time doesn’t mean it remains the best choice today.

Such is the case with the Hydra-Shok load from Federal Premium. At one time, the Hydra-Shok was the king of defensive ammunition. However, the technology has long since been surpassed by other loads such as the Gold Dot from Speer and Federal’s own HST loads.

Testing in gelatin along with ample anecdotal evidence from police involved shootings show rounds like the Gold Dot and HST tend to perform better than the Hydra-Shok. Yet, because of its history, the Hydra-Shok name still carries an air of power with it.

This year Federal is launching a new line of personal defense ammunition called Hydra-Shok Deep. What is this new line of ammo? Is it worthy of the Hydra-Shok name? Let’s take a look.

Designer Tom Burczynski recognized that velocity was the only tool ammunition manufacturers had to cause a hollowpoint bullet to expand. Slow moving bullets did not expand easily, so many companies tried using soft lead alloys and thin or soft bullet jackets to ease expansion.

Burczynski’s idea was to add a center cone to the hollowpoint cavity. This center cone was a way to force expansion of the bullet as material entered the cavity. The design would mean that velocity was no longer the only tool that would cause reliable expansion. However, for bullet manufacturing reasons, a post was ultimately used instead of a true cone design. (For a good read on the development of the Hydra-Shok design, I recommend chapter 22 of the book Street Stoppers. It was written by Burczynski and offers a detailed look at design considerations and decisions.)

In general, the Hydra-Shok loads worked well. Many police departments issued the ammunition, and it was very well regarded. However, like any man-made device, the Hydra-Shok bullet design was not perfect. It did well, but performance could be increased.

Newer designs like the Federal HST and Speer Gold Dot were developed, and they bumped the Hydra-Shok from the top of the ammunition hierarchy. After I started my law enforcement career in the mid-90’s, my department issued the PMC Starfire round – another Burczynski design – but ultimately settled on the Gold Dot.

Today, the Hydra-Shok line is marketed to the personal protection market, and I know of no law enforcement agencies that issue the rounds.

The premise of the Hydra-Shok design remains an excellent one. However, with a better understanding of the effects of bullets on stopping attackers combined with decades of additional manufacturing advancements, a new version of the old bullet seems to be in order. 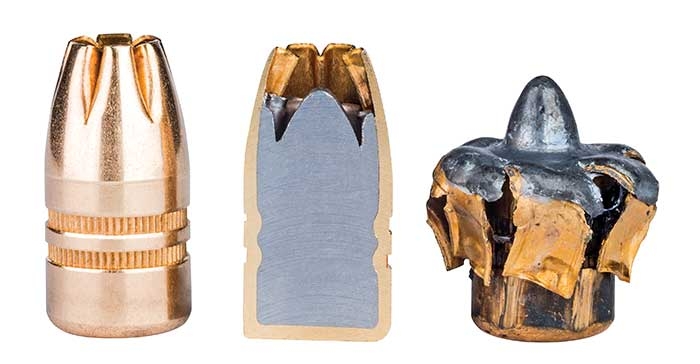 The new Hydra-Shok Deep bullet retains the center post, though it has a different look than the original design. This bullet appears to have a post that is shorter and thicker than older designs. Its shape is closer to that of a cone, and may better reflect Burczynski’s original concept.

From the side view of the bullet, it appears the jacket extends significantly beyond the lead core. From the expanded bullet photos, it appears that expansion may be less dynamic with the Deep design that with the original.

Of course, less expansion may be exactly what Federal was aiming for with this design. I find that to be ironic, as the original intent of the Hydra-Shok design was to increase expansion as compared to other bullet designs of that era. However, a controlled expansion may be key to the bullet consistently penetrating to the depths the company wants to achieve.

According to Federal, the Deep design “better meet[s] modern performance measurements.” Additionally, the new round “provides as much as 50% deeper penetration than original Hydra-Shok” ammunition.

A 50% increase in bullet penetration depth is substantial.

Throughout the literature provided by Federal, the company emphasizes how much better the new load is at penetration and scoring on the FBI ammunition tests. For example, the company states that this round shows a 70% improvement in the FBI protocol score and “penetrates 15 inches in bare ballistics gel – the optimal depth accoding to FBI standards.”

My concern, however, is reliable expansion from the Hydra-Shok bullet. Original Hydra-Shok projectiles did tend to expand more frequently than standard hollowpoint designs of the 1970s and 80s. However, they were not perfect. I had seen examples of Hydra-Shok bullets that failed to expand even with the center post.

Ammunition testing by Lucky Gunner showed that the conventional, modern manufactured Hydra-Shok loads did not consistently expand. For example, the 9mm 135-grain round was fired five times into Clear Ballistics media with a denim cover. Of the five rounds, only two showed good expansion. Two more showed partial expansion while a fifth bullet showed no expansion at all. The 9mm 124-grain and 147-grain loads performed even worse with a total of six of the 10 bullets showing no expansion. 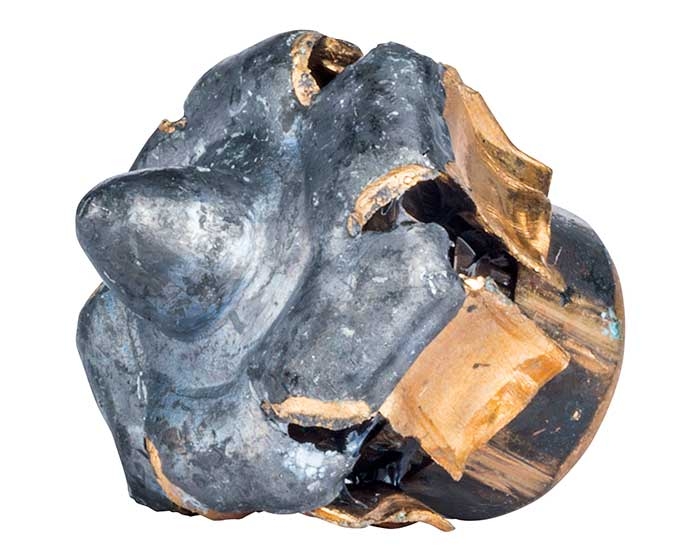 It is my hope that the new design will deliver reliable expansion and penetration. This statement from Federal is encouraging: “Hydra-Shok Deep not only outscores the competition in testing, its remarkable improvements in expansion, penetration and integrity through defensive barriers boost real-world performance as well.”

Right now, Federal only announced one load that uses this new bullet design. It is a 9mm round with a 135-grain bullet. Federal lists the muzzle velocity as 1,060 fps which is about 337 ft-lbs of energy. 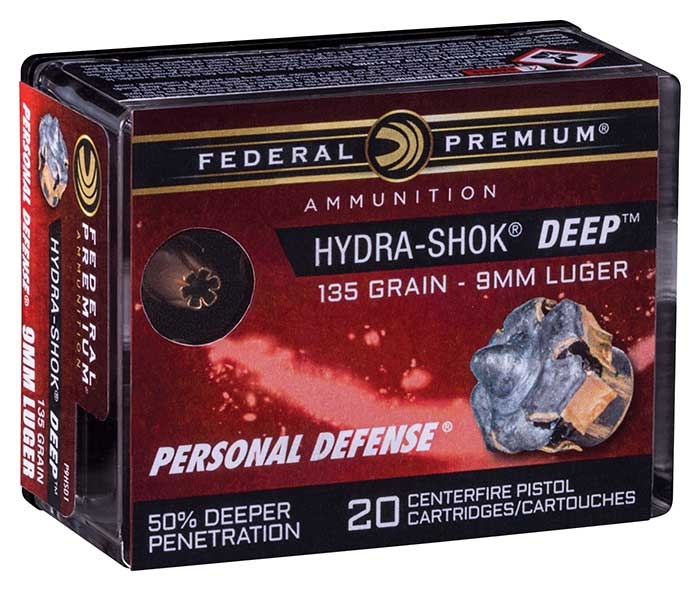 Those numbers are measured with a 4” test barrel. Out of a smaller defensive gun like a Smith & Wesson Shield or Walther PPS M2, I would expect lower velocities. Of course, the whole point to the Hydra-Shok design is that velocity is not the only mechanic to drive bullet expansion. So, this could be an excellent load for short barreled firearms. I’d like to see some additional testing before I load my Glock 19 magazines with this ammo.

Federal stated that “other loads [will be] coming soon.”