I avoid acquiring gear for the purpose of having more gear. In my opinion, there should be a quantifiable reason to pick up a piece of kit. When a piece of equipment is able to solve a problem I’ve had to deal with in the past, it catches my attention. That is exactly the case with the new Defense Mechanisms Rifle Sling.

I consider defense mechanisms to be unconscious actions that protect us from harmful events. This fits in with what I understand the mission of Defense Mechanisms to be. DM builds gear that effortlessly solves problems with existing gear. I spoke with Tim and Jesse from Defense Mechanisms in the Press Room at SHOT Show 2020 and they emphasized this point. There is plenty of great gear out there. If it already exists and it performs well, you won’t see Defense Mechanisms building it. Instead, they focus on making significant improvements in critical pieces of equipment.

That is exactly what they have done with their new Rifle Sling.

It probably isn’t big news to you, but rifles need slings. Especially defensive long guns. A sling serves several purposes. Not only does it help you carry your rifle, but it also helps you maintain control and frees up your hands when you need them.

First of all, a rifle sling can be a great tool for taking the weight off of your hands and arms when carrying your long gun. This is the purpose that the sling on your hunting rifle serves and it can be an important one. Fatigue is real, and reducing it makes life better.

Don’t think that slings are just handy for hunters though. I have several hunting rifles and I honestly haven’t given their slings much thought.

But my defensive long guns are a different story.

A rifle sling can also hold your gun while your hands are busy doing something else. Whether you are opening a door, scooping up a family member, or administering self-aid your sling holds your rifle when you can’t. It ensures that you don’t set your gun down and cause damage, leave it behind when you move on, or allow someone else to take control.

That control issue is also important when you still have your hands on your gun. A sling plays an important role in the defensive use of a long gun and needs to do its job well. If another person tries to take control of your rifle while you have it in your hands, your sling helps you maintain control of it. If you sling it properly, you are working to ensure that you won’t be shot with your own rifle.

When it comes to slinging the AR15, the Vickers Sling and its variants tend to rule the roost. They are popular for good reason. They’re versatile and they work. The Vickers Sling is a two-point sling that attaches directly to the front and rear of the rifle. The sling can be adjusted quickly with the pull tab, so you can make your sling the length you need it to be almost effortlessly.

Vickers Slings work well, but they aren’t perfect. This is where Defense Mechanisms comes in.

The Defense Mechanisms Rifle Sling is a Vickers-type sling. It’s also a two-point sling that allows for quick adjustability with a pull tab. What’s nice about the DM Rifle Sling is that it simply outperforms other slings that are similar to it with subtle but intentional improvements.

As I mentioned previously, the Rifle Sling from Defense Mechanisms adjusts on the fly with a pull tab similar to the Vickers sling. There is a key difference in the performance of the DM Sling, however. The pull tab is sewn in a manner that keeps it flagged out from the main webbing of the sling. This simple set of stitches kicks the tab away at almost a 90-degree angle, making it easy to find the pull tab by feel — even when wearing gloves.

Other slings depend on color-coding to help make the tab locatable, which can be problematic because looking for your adjustment point may not be possible. The angle on the DM sling pull tab makes it easier to find by feel and helps you visually identify it as well. No matter how you find it there is no doubt it is easier to grab with the angled attitude.

I keep my AR15 staged in a Hornady Rapid clamshell safe. One of my previous frustrations was what to do with the sling that my gun was wearing. I tried banding it to the rifle with elastic and draping it outside of the safe. I settled on the latter, but I was never happy with the setup because a long swath of webbing floating around is begging to cause problems. Those that stage an AR15 in their patrol car for duty use may have a similar set of concerns.

Defense Mechanisms has solved that issue. Their sling comes with a set of three elastic keeper loops and a nifty threading attachment making it easy to stow the sling on the side of the gun. 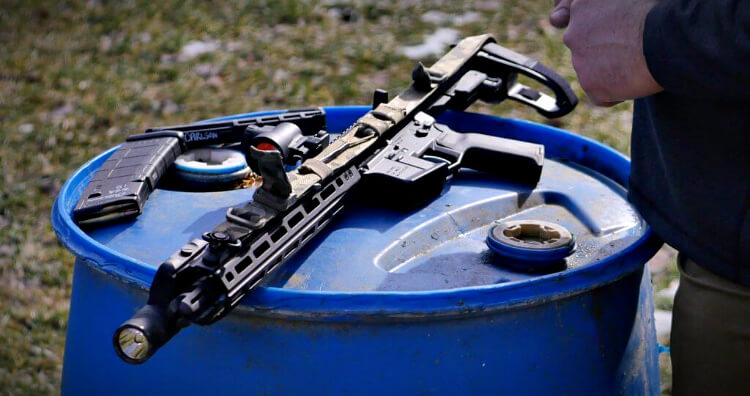 The organized stowing keepers prevent the sling from entangling with obstacles while at the same time ensuring that the sling will be ready to be used when needed with a simple tug. 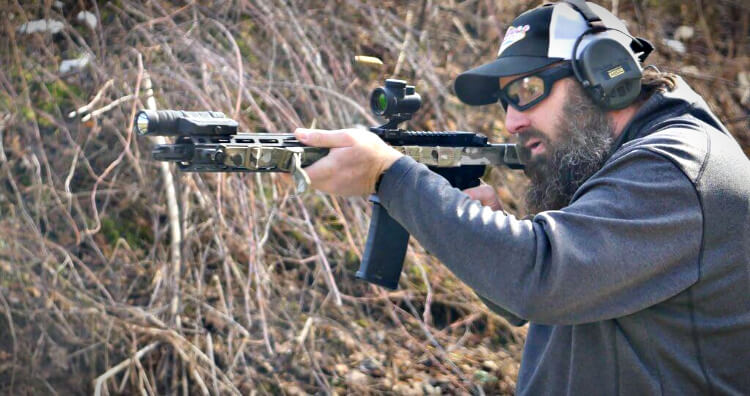 Most other slings are made from 1.25” webbing, but the DM Rifle sling instead uses 1” webbing for a specific reason. The reduced width of the sling allows full access to the AR15 (or AR10) controls while the sling is stowed on the side of the rifle. So, if your rifle is staged in a “cruiser-ready” mode with a magazine inserted and the bolt forward, you have access to the charging handle and the gun can be loaded without interference from the sling. It is equally easy to manipulate the safety and press the bolt catch should you need to lock your bolt back to deal with a malfunction.

My rifle is staged with mag inserted and bolt locked to the rear. I could use the charging handle to send the bolt home or simply use the bolt catch/release. The release is easily depressed under the sling. The 1” webbing is just as comfortable to wear as typical 1.25” slings, but it is infinitely more functional should I need to operate my rifle with the sling stowed.

I consider myself lucky to know that Defense Mechanisms exists. I also had a heads up that this new company was ready to start doing business. It wasn’t luck that made my Rifle Sling the very first order Defense Mechanisms received. That was me paying attention to what was important and knowing that adding this sling to my AR15 was actually going to make a difference.

DM would have been happy to send me a sling to use, but I was very pleased to pay for it. The price is reasonable. It’s custom made to order and is a significant improvement over other slings on the market.

I have other AR15s that need slings and although I have a small pile of webbing in my gear I’ll be putting more Defense Mechanisms Rifle slings on my long guns.