COVID-19: your Guns and your Money 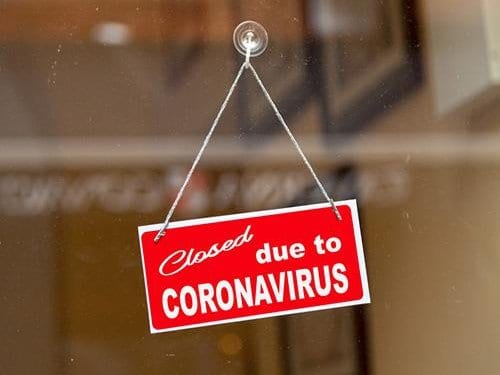 It is hardly breaking news that gun sales have gone up significantly as the impact of coronavirus on the United States continues to develop. What began as social distancing and hygiene remonstrations have evolved into a wide range of drastic, in some cases arguably unConstitutional, measures enacted at virtually every level of government. Massive spending programs and “stimulus packages”, a ban on large gatherings, the closing of “non-essential” businesses, international and intra-national travel restrictions, stay-at-home or shelter-in-place orders have been enacted all across the country. These things are objectively reasonable actions based on the responsibility and authority of the government(s) to “…regulate on behalf of public health, safety, and welfare.”

The extent and necessity of these measures, however, rightly remain a topic of concern and discussion. In this article, we’ll be addressing two things specifically affected by coronavirus response: your guns, and your money.

“Anybody making their responses to events contingent on political office not being held by narcissistic ass-clowns is putting their fate in the hands of circumstances they can’t control. They’re making a false virtue of dependency.”  J.D. Tuccille

Although there have been no Federal efforts (yet) to implement gun control measures under the guise of coronavirus response*, there have been many at the state and local level. Some of the alleged motivations for these actions have been out of a “concern for public safety”, others because gun stores, FFLs, etc. have been deemed non-essential.

*H.R. 5717 Gun Violence Prevention and Community Safety Act of 2020 was introduced by Rep. Hank Johnson (D-GA) back in January. It was later referred to the Subcommittee on Crime, Terrorism, and Homeland Security. (You can read that bill via online here.) Misinformed and nonsensical as Rep. Johnson’s statements have been, it is hard to credit this bill with any coronavirus connection given its timeline — which doesn’t mean the COVID-19 emergency isn’t being used to promote it.

• Just a few days ago, Los Angeles County (CA) Sheriff Alex Villaneuva told local news Fox 11 that his office would be directing deputies to close area gun stores, saying they are “…not an essential function.” Sheriff Villaneuva is also the County’s Director of Emergency Operations and thus the POC for both FEMA and National Guard requests for assistance. In the case of the latter organization, Villanueva said he’d ask for help only under dire circumstances.

LASD’s suspension efforts were suspended the next day and then reinstated shortly thereafter.

• Wake County (NC) Sheriff Gerald Baker recently announced his office would stop issuing concealed carry permits until April 30, 2020  ̶  including a backlog of nearly 800 applications still awaiting attention. Sheriff Baker said the need to purchase a pistol during a pandemic is “…not an emergency situation,” and that his decision was more about public health (i.e. the coronavirus) than public safety.

“This decision does not limit anyone’s right to purchase a handgun. Over the past several weeks, our staff has been inundated with high volumes of permit applications that has [sic] made it impossible to process by law. This decision is not a violation of anyone’s Second Amendment Rights. Most importantly, this action will limit persons encountering one another during this time of State of Emergency, consistent with Governor Roy Cooper’s Executive Orders and that of Wake County Commissioner Greg Ford.”

• Guilford County (NC) Sheriff Danny Rogers took the same action, with a release saying in part, “…as a result of the impact of the on-going Covid-19 virus, Sheriff Rogers is temporarily suspending the issuance and processing of concealed carry handgun…permits.”

• The Philadelphia (PA) Police Dept. shut down its gun-permits unit earlier this month though gun stores remain open (see below). Inspector Sekou Kinebrew, Philadelphia PD, said officers would continue to arrest people who carry a firearm without a permit, though narcotics, theft, burglary, and other offenses would be handled via warrant in lieu of arrest.

• The Montgomery County (OH) Sheriffs Office has suspended Concealed Carry Weapon Licensing Services until further notice. Much as the PPD’s closure, this does not affect the ability to purchase a firearm but does impact the local legality of carrying a weapon concealed.

• New Orleans Mayor Latoya Cantrell specifically addressed firearms in her declaration of emergency: “…the Emergency Authority is hereby empowered, if necessary, to suspend or limit the sale, dispensing, or transporting of alcoholic beverages, firearms, explosives, and combustibles.” 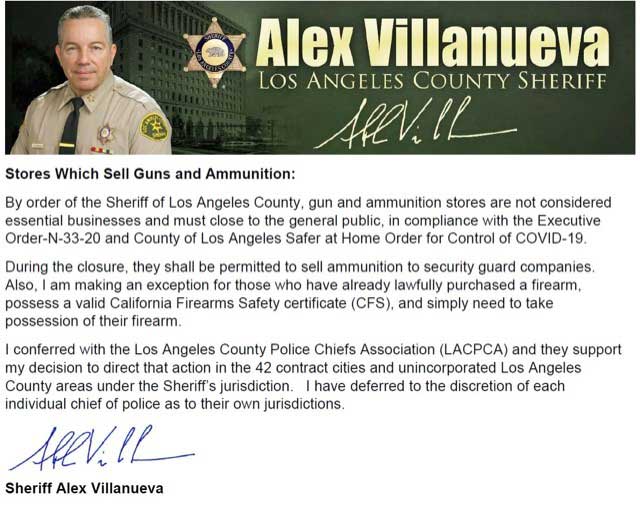 • Although firearm retailers were not called out as specifically non-essential, New Mexico Governor Michelle Grisham has reportedly had State Troopers making contact with store owners and ordering their businesses closed.

• New Jersey Gov. Phil Murphy’s business exemption/closure guidelines led the New Jersey State Police to shut down its background check website. The effectively made it impossible to purchase a firearm. This action has also been challenged by the Firearms Policy Coalition (and by the Second Amendment Foundation as well).

• Pennsylvania Gov. Tom Wolf initially excluded gun dealers from the “essential business” list but reversed that position after a challenge by the Firearms Policy Coalition. Pennsylvania’s Life-Sustaining Business FAQ now reads in part, “Firearms dealers may operate physical businesses on a limited basis to complete only the portions of a sale/transfer that must be conducted in-person under the law.”

• California Gov. Gavin Newsom did not (initially) exempt firearm and ammunition suppliers and retailers from mandatory closure, though that is currently being contested (and vague language is just making things more confusing anyway).

• Delaware Gov. John Carney initially categorized firearm retailers as non-essential but later changed that order — albeit with significant restrictions that will impede the ability to purchase a firearm.

• Other executives shuttering gun and ammunition retailers include (as of this writing) New York’s Andrew Cuomo, Massachusetts Gov. Charlie Baker, Maryland’s Larry Hogan, and the District of Colombia’s Muriel Bowser. Some of those restrictions may be loosened as challenges from the FPC, SAF, and others are filed.

These are just some examples of current events, though it should be noted that not all the news here is bad.** The situation will evolve and other polities will assuredly follow New York, New Jersey, Wake County, and others.

Not surprisingly, exemption decisions seem to be made along party lines, though we do appear to be seeing substantial growth in the number of previously disinterested, anti-gun, or just 2A-lethargic people who are realizing the government cannot be relied upon for immediate security (or for that matter rescue).

**Illinois governor J.B. Pritzker exempted gun retailers, .e.g. “… and firearm and ammunition suppliers and retailers for purposes of safety and security…” So too did Ohio’s Mike DeWine, though like Wolf and Carney he required some convincing.

To keep up with ongoing legal battles over Second Amendment violations, we suggest the following resources:

The NRA also has a page dedicated to COVID-19 updates.

The $2 trillion dollar “Phase III” emergency aid package recently passed and is on its way to becoming law. Its avowed purpose: [To provide] emergency assistance and health care response for individuals, families, and businesses affected by the 2020 coronavirus pandemic.”

The thing people are most talking about regarding the pending bill is the stimulus checks: $1.2k for every adult ($2.4k for couples filing jointly) plus $500 for every (minor?) child. As reported income climbs this amount is reduced until for example, you reach a stimulus check of $0 for a single filer making $99,000. (Read more about the stimulus checks on Forbes).

It goes to several places, with the intention of shoring up the economy, fighting COVID-19, and other efforts, to wit:

▪ Over the counter medical products without a prescription

That seems reasonable. Here’s how roughly 80% of the “emergency supplemental appropriations package” was targeted:

So far, so good. The $2 trillion dollar package has some additional allocations:

We then get into some line items that ought to raise a few eyebrows (assuming the definition of “critical for national security” didn’t already push them up).

The numbers in green below reflect what is in the current bill going forward. Numbers in blue are for comparison to what House Democrats1 put forward (q.v.). Both numbers make it clear there’s at least as much opportunism as there is altruism in the legislation.

Note: I have tried to be as accurate as possible with these numbers, but it’s possible I got something wrong or just fast-typed a typo. If you see something incongruous or incorrect, let us know in the comments and we’ll double-check it.

$50 million ($500 million):  The Institute of Museum and Library Services

$150 million ($600 million): the National Endowment of the Arts and the Humanities

You might think my selection of those line items could be construed as an attack on Democrats — you might think that, but you’d be wrong. I’m slamming all the politicians engaging in their love of pork during a time of national emergency.2

Need an example of Republican tomfuckery?

Ask yourself why the Treatment of Sunscreen Innovation Act made its way into the bill? Perhaps it’s intended to help protect everyone who is spending more time outdoors now that they’re bored? Or maybe it’s related to Ashland Inc. and L’Oréal  ̶ both of which are in Senator McCollum’s home district.

But wait, there’s more. Some of these may be completely legitimate. Some might not.

Now, keep in mind that all that money — all $2 trillion of it — is in addition to the money already included in H.R. 6201, the $2.4 billion Families First Coronavirus Response Act, which was signed into law by the President on Wednesday the 18th. Nor does it count anything from the $8.3 billion emergency health package that was passed earlier in the month.

How does all that break down for you and me?

That’s a little more than $6,000 in principal debt, each, for every single living human being in the United States.

Not everyone will be helping to work that debt off, however, so let’s confine the numbers to current taxpayers only.

That’s just over $14,300.00 in debt they just hung on every individual currently paying taxes.3  That puts everyone in the US at over $71k in debt each, and taking the US Debt Clock to over $23 trillion. None of it, insofar as I’ve been able to determine, has been countered by a corresponding reduction in spending anywhere else.

Some of this spending is justified by the current crisis. Some of it is indisputably not.

Well, unless you want some sunscreen or want to visit the Smithsonian while you’re quarantined.

Read H.R. 748 for yourself: follow its progress at Congress.gov.

3The entire population is estimated to be right around 330 million; a little less than 300 million of those are citizens, and as of 2016 140 roughly million (reported in 2018)  of them are taxpayers.