What features would you expect in a sub-$500 gun? Not a lot, I imagine. Nor would I. Bells and whistles are typically reserved for moderately expensive pistols such as FN, H&K, Glock, and a host of other well-known and well-established companies that grace the shelves and display cases of gun stores all over the country. Those guns certainly earn their excellent reputations and their price tags. But what if I told you a “bargain” gun came with a whole host of fanciness not normally found in its monetarily equivalent competition? Enter the Arex Delta Gen 2 M, stage right.

The Slovenia-made pistol hit American shelves a couple of years ago, so it’s not a brand-new gun, per se, but it’s certainly not one that will roll off the tip of most gun enthusiasts’ tongues. You get a lot of “what it’s called, again?” looks when bringing it up in casual conversations.

But it deserves to be part of the conversation when talking about some of the best guns for concealed carry because it offers many of the same features as its higher-priced brethren – and a few they don’t.

It’s clear what Arex had in mind with the Delta Gen 2 line, which includes a longer barrel L model, a shorter barrel M version, and a shorter barrel but longer grip X version. They are targeting the Glock 17, 19, 19X, and other similarly sized polymer striker fires. And they’re doing an impressive job.

Think of it like this (~ish). Then read on. You might be as surprised as I was.

Arex sent me the M version, which has its sights set on Glock 19 buyers. The dimensions of the two guns are nearly identical.

There is also a 10-round Arex Delta M mag available. 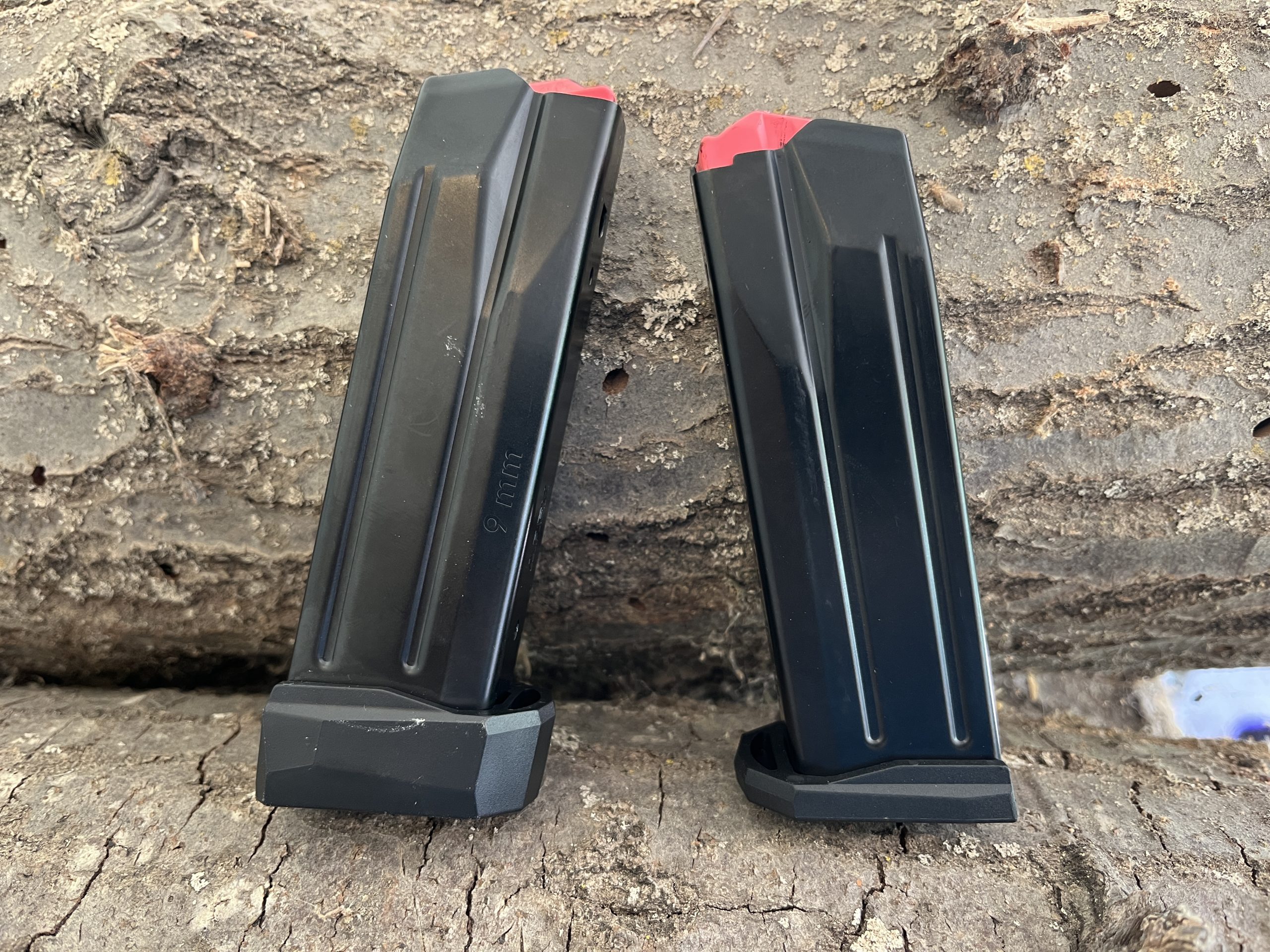 Aesthetically, the Delta Gen 2 is reminiscent of classic science fiction movie guns, with its futuristic angles and cuts, not the typical polymer gun design we are all used to. It’s certainly not a blocky gun, although it was clean corners and looks beefy and ready for action.

The Delta Gen 2’s trigger surprised me. Normally, guns in this price range have sloppy triggers, slow to reset, and lots of slack travel before engaging. Not this one. Sure, there was slack – every trigger has at least a little – but the 5-pound bladed trigger with integrated safety broke cleanly about halfway back and reset crisply, quickly ready to reengage.

On one of my testing days, I also shot a Hellcat Pro for comparison and found the two triggers handled nearly the same way. Blindfolded, I’m not sure I could have told the two apart. (As an aside: have you ever tried blindfolded archery? You don’t know what you’re missing.)

Considering the Springfield is about $200 more expensive, that performance speaks highly for the Arex.

Arex built a ton of great features into the Delta Gen 2 M that you won’t find on anything at a similar price point. Sure, you’ll find a few of them, but you’d be hard-pressed to find them all on the same gun.

First, they included four interchangeable back straps. It’s not uncommon for guns to come with one or two extra back straps, but this one comes with four, each significantly different from the others. Changing them out is simple, with a single push pin a the bottom of the grip that only requires a small punch to remove. Once the pin is out, the back strap slides right off. Reverse the process for the replacement and you’re back in business in under a minute. 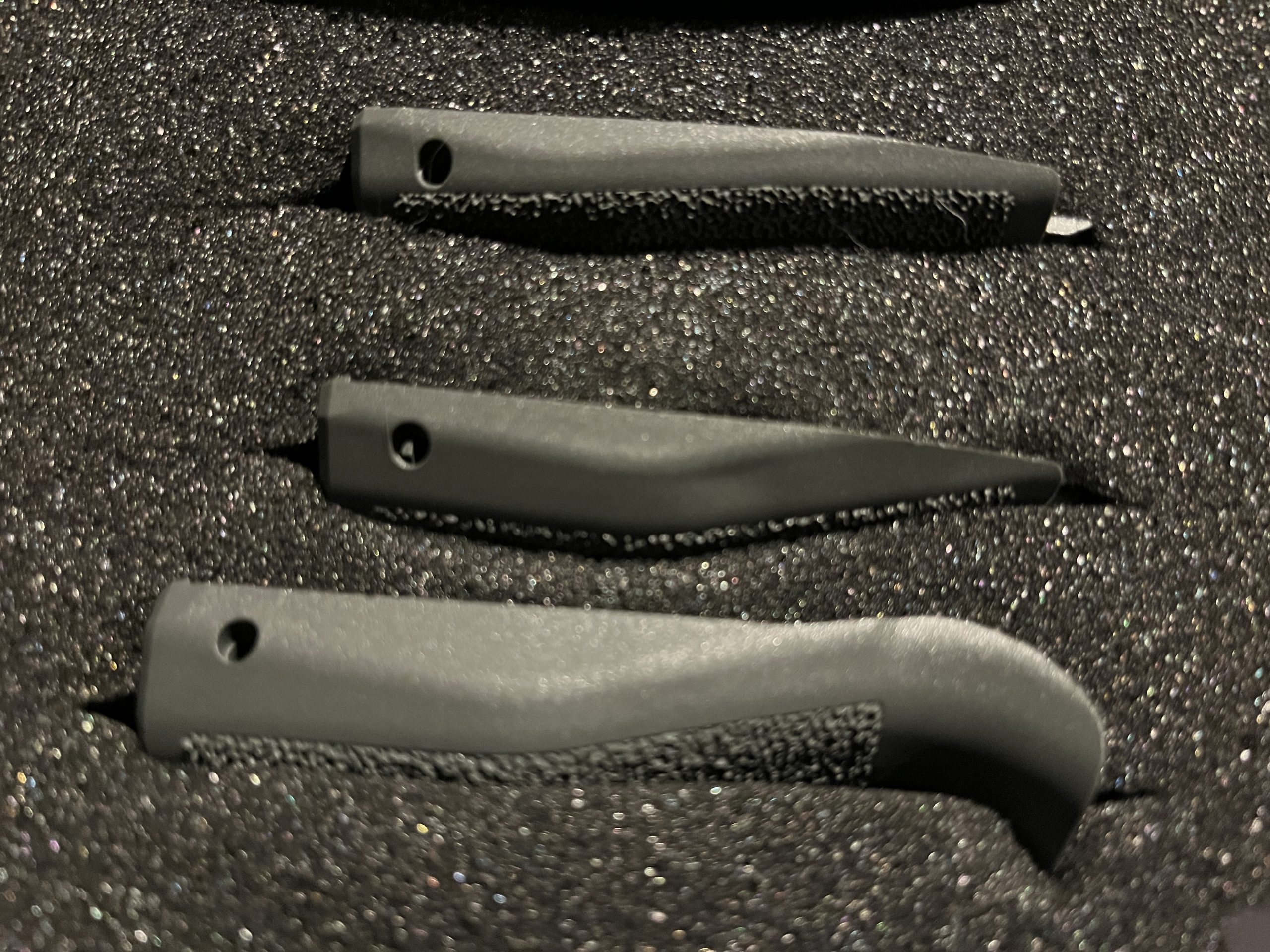 Grip texturing is not too rough and not too smooth, thanks to a sandpapery pattern that wraps the grip in a just-right density rugged enough to maintain solid grip with sweaty palms but smooth enough that your hands won’t feel raw and beat up after a day at the range.

The Melonite slide is enhanced with an isosceles triangle pattern on the front and rear for a distinct look and easy grip for racking and press checks – better than the rival Glock 19. I love my Glock, but these serrations are better and more stylish.

Speaking of the slide, the recoil spring is robust enough to take the punishment of repeated cycles for a long time but with a lighter pull weight for easier racking. You can check the gun’s condition with two great features: a tactile loaded chamber indicator on top and a visible red striker indicator on the back.

Need to attach a light or laser? A full Picatinny rail under the nose will accommodate full-size accessories, something many of the Delta Gen 2’s competitors can’t boast. Usually, you get one, maybe two accessory slots for tiny accessories. Not here. Got a full-size Streamlight or SureFire? Bring it.

If you’re a lefty, you’ll jump for joy over the Delta Gen 2’s completely ambidextrous controls, yet another nicety normally found on pricier hardware. Everything is duplicated on the right side, including the slide stop and magazine release. The slide stop button is relatively flat, which is great for preventing accidental release. In addition, it incorporates a tiny self that is easier to operate with the thumb than it first appears. I thought it would be difficult, but it let the slide flip forward effortlessly.

While we’re on the topic of releases, here is where I experienced my first concern: the magazine release. Right out of the box, it was hard to activate. It’s flush, like the slide stop, and for the same reason, which also is great for preventing accidental mag drops, but it makes deliberate mag changes a bit more challenging. However, with a few practice pushes and a bit of break-in, it loosened up nicely and worked perfectly from then on out. If you watch online reviews of this gun, you’ll hear the same complaint from almost everyone. The mag release does get better, but it’s annoying at first to work so hard to change magazines.

However, when you get it working, mag changes are fast and simple, thanks to a slightly flared mag well interior that quickly eats up the new magazine, providing a solid seat and firm lock in place.

You just have to be patient.

Remember the comparison to the Glock 19 mentioned above? One more way the Delta Gen 2 is aimed at the Austrian gunmaker: the take-down system is almost identical. (The sincerest form of flattery?) I say almost because it shares the same “Glock Squeezies” system of the pull-down tabs on both sides of the slide. However, the rails inside the slide are much shorter those of the Glock, so the slide comes off by only moving it a fraction of an inch instead of the entire length of the frame once the tabs are squeezed. 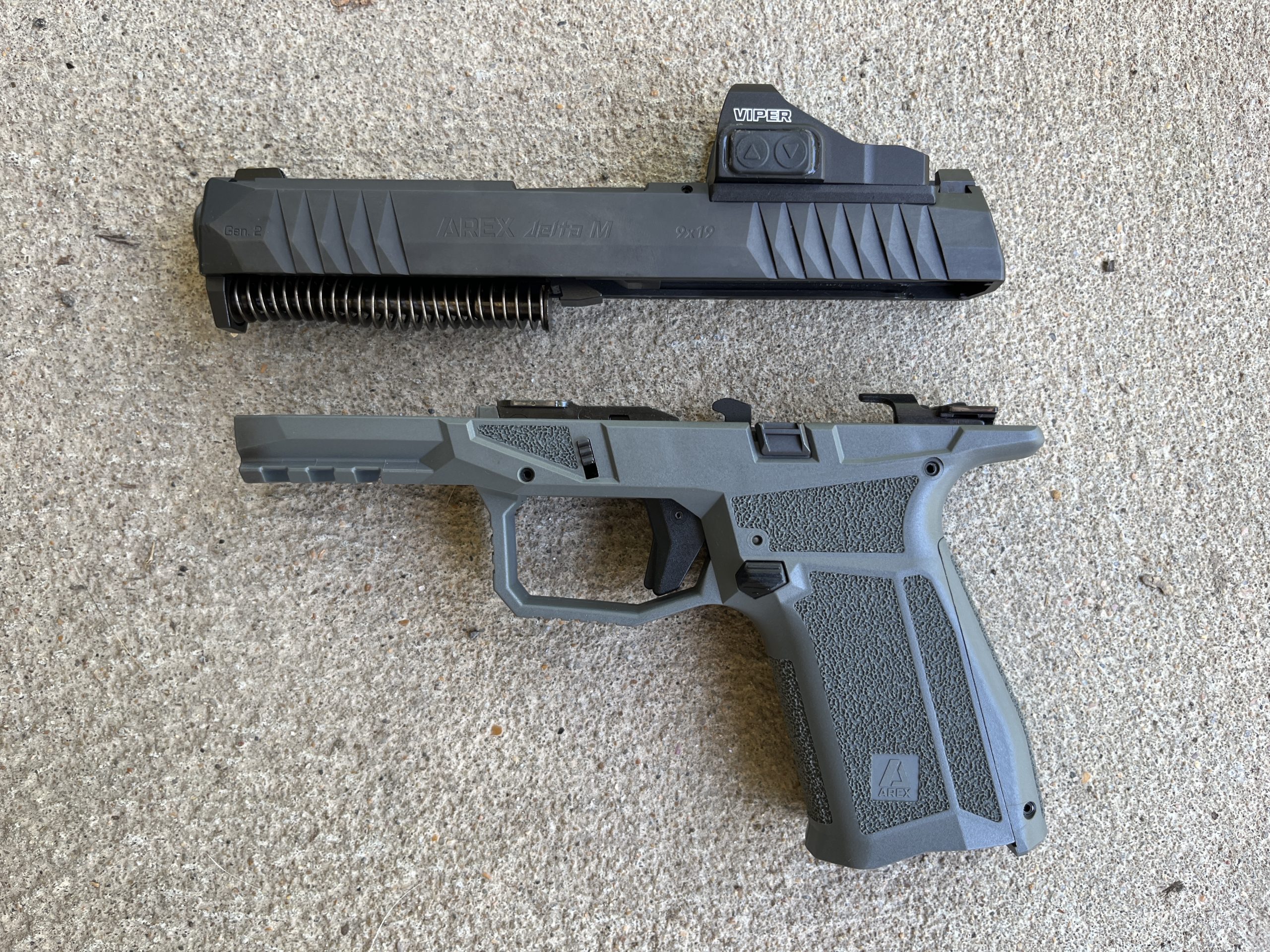 The Eyes Have It

Of all the great features the Arex Delta Gen 2 offers, the one that probably stands out the most is the optics-ready system. Of course, it’s not just optics ready. That’s been done before and should be standard on all new handguns. But how many optics-ready pistols at this price range (or any price range) come with adaptors for just about every popular red dot on the market at no extra charge?

The Delta Gen 2 comes with optic plates for Vortex, Holosun, Eotech, Trijicon, Leupold, and over a half dozen more popular brands. Arex also includes the screws and adaptors needed for a clean fit. I installed my Vortex Viper in about 10 minutes. 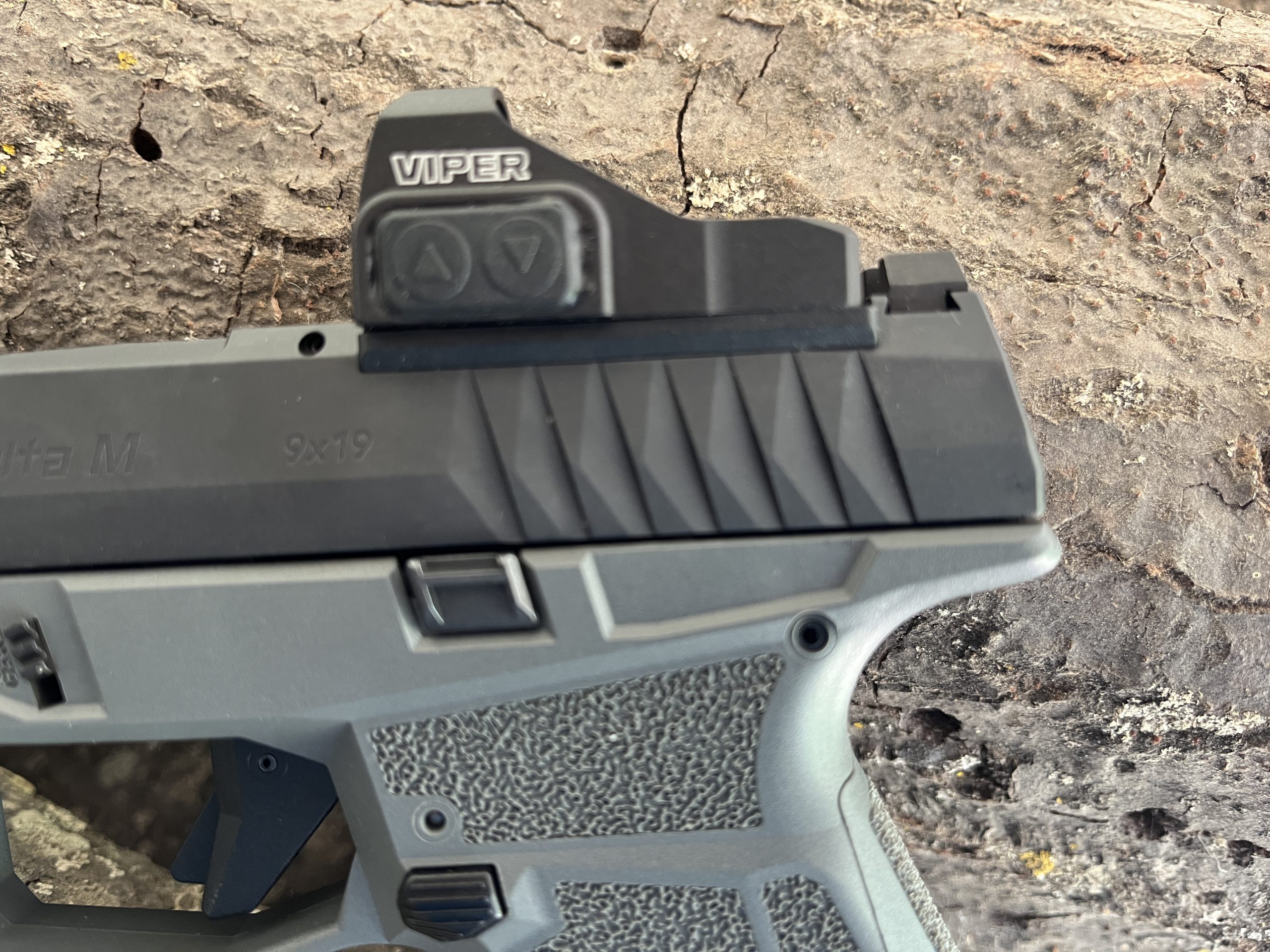 Not optic ready yourself? The iron sites are blacked out rear with anti-glare texturing and a single white dot on the front post. The rear site is squared off for easy boot, belt, or table rack yet low profile enough to reduce the chance of snagging on the draw or reholster. I am not a big fan of blacked-out rear sights, so I would replace them with a more traditional set, but then again, I’m a big red dot guy, so maybe it won’t matter since I’ll be aiming through the window anyway.

Despite the Arex Delta Gen 2 M’s laundry list of reasons to be a popular gun, one thing that might drive me to drink more is the lack of aftermarket support. Good luck finding a Kydex holster for it. I’m not kidding. You’d think there would be more options for a gun that has been out in the wild for a couple of years, but there are very few companies that make gear for it – at least not that you can easily find. This is obviously because the gun is not as popular as many of its market competitors.

Still, anyone who makes a holster for it now will find their brand very popular among Arex owners (and at least one reviewer). Rumor has it that Glock 17 holsters work with it, but that’s only somewhat true. A few of them do. But most of them don’t. And anytime you carry a gun, it’s best to hold it in a holster designed specifically for it. It’s a shame more holster makers haven’t stepped up and filled the void.

ANR Design makes some, we hear Crossbreed may be making some, and of course there are holsters like the PHLster that provide retention based on WML geometry. Hopefully more places will be providing us some good holster choices.

As you can probably decipher by now, I am more than a bit impressed with the Delta Gen 2M from Arex Defense. If my testing is any indication, it seems to be a reliable, easy-to-use polymer striker fire with a smorgasbord of great features normally found on my more expensive guns. Of course, time will tell if I still like it after shooting thousands of rounds through it, but I’ll add it to my Favorable Guns list for now.

The Delta Gen 2 M’s MSRP is around $450 for the optic-ready version and beneath $400 for the non-optic version. Out the door, you’re looking at around $400-425 with the optics package, a darn good value for a gun with a ton of reasons to recommend it.