The Avtomat Kalashnikova (Kalashnikov’s Automatic Rifle) was easily the most prolific small arm of the 20th century. Adopted by the Soviet military in 1949, the AK saw service all over the world. The rifle’s descendants are still the frontline weapons of several major nations and many smaller ones. One in five of the world’s firearms, some 100 million, is estimated to be some kind of AK.

But where did it come from? This “revolutionary” firearm didn’t just spring into the Red Army’s hands from the aftermath of World War II. Well, that’s a long and detailed story, but we’re going to cover it briefly and at least hit the high points. When we’re done, we might just conclude that the AK was more “evolutionary” than “revolutionary.” This is Part 4 of the ongoing AK 101 series. If you’re a new gun owner and interested in AK rifles, consider checking out Parts 1, 2, and 3. The AK’s story is best understood through the career of designer Mikhail Kalashnikov.

Mikhail Kalashnikov was an interesting guy. The communist government forcibly relocated his family to Siberia from their home village of Kurye when he was 11 years old. Flashing an early glimpse of his creative mind a couple of years later, Kalashnikov studied the area commandant’s stamped seal until he could reproduce it from a piece of wood. He then forged some travel papers, stamped them, and had himself approved to go back to Kurye. The only problem was that he had to walk. So, he did. Almost 1,000 kilometers.

Once he returned, an acquaintance gave him an old nonfunctioning Browning pistol. He spent hours trying to repair it. But the Soviet Union severely restricted private gun ownership. The local police got word he had a gun and he had to leave town quickly to keep them from confiscating it.

Kalashnikov found work as a mechanic at a tractor factory, where a Communist Party organizer noticed his manual dexterity and intuitive knowledge of machinery. The Party transferred him to a nearby weapons design bureau where he tested the fit of rifle stocks.

The Red Army conscripted Kalashnikov when he turned 18. It was 1938, and his knack for machines got him assigned as a tank mechanic and driver. It wasn’t long before Kalashnikov drew his superiors’ attention by inventing an engine hour counter for his tank. The Kiev Military District’s Tank school, and soon the entire Red Army, adopted the device. General Georgi Zhukov, commander of the district, personally presented Kalashnikov with a wristwatch in recognition of his achievement.

Kalashnikov transferred to a Leningrad factory to aid the production of his invention. While there, he also invented and developed a switch to save the charge on a tank’s batteries. The Army later adapted the switch for use on self-propelled artillery pieces. Such devices already existed, but Kalashnikov’s was smaller, simpler, and more reliable. That philosophy eventually became his calling card.

The sudden and shocking assault by Nazi Germany in June 1941 sidetracked Kalashnikov’s budding career as a tank designer. The Germans decimated his old unit at the Battle of Dubno that same month. The Army sent Kalashnikov to help rebuild it. Traveling south from Leningrad, Kalashnikov met his old tank commander. Soon, the former mechanic was a senior sergeant with a tank of his own.

Kalashnikov’s unit returned to combat in August as part of a Soviet counterattack that went terribly wrong. The Red Army’s command and control was not up to the task in the fall of 1941 and the Germans stopped them, surrounded them, and all but annihilated entire army groups. Heavy fighting saw Kalashnikov wounded in early September. His division’s remnants evacuated him when they broke out of the German encirclement.

While he recovered in the hospital, Kalashnikov turned his mind to designing a light, compact submachine gun for tank crews. Soviet tanks were provided with PPSh-41 or PPD submachine guns, but Kalashnikov’s experience showed they could be unwieldy when exiting a damaged tank in a hurry. He also overheard some of his fellow soldiers complaining about how unreliable their infantry rifles were.

He conceptualized the new submachine gun in the hospital. Kalashnikov completed his recovery at home after the hospital released him. He developed a prototype with the help of the engineers of the nearby Moscow Aviation Board. The German threat to the Soviet capital had forced them to relocate.

The Red Army accepted the gun for trials in 1942. They designated it the Pistolet Pulemet Kalashnikova (Kalashnikov’s Machine Pistol or PPK). The testers rejected the gun despite its performing well. The design required extensive milling and complicated lock work, making it unviable for mass production in a fully mobilized war economy. But the testers noted the gun’s quality. Kalashnikov was assigned to the Central Scientific Developmental Firing Range of the Red Army’s Chief Artillery Directorate.

Kalashnikov’s new post boosted his natural ability. He had not advanced past the seventh grade in school. Now, he was working with university graduates who helped him fill in the gaps and grow from a talented mechanic into an engineer.

1944 saw Kalashnikov and a colleague named Petrov enter a competition for a carbine using the new intermediate 7.62×39 cartridge. Several of their design elements borrowed heavily from the American M-1 Garand, including the locking mechanism, trigger mechanism, and the rotating bolt. The rifles were tested early in 1945. Veteran gun designer Sergei Simonov’s SKS beat out the Kalashnikov-Petrov carbine. Critically, their rifle failed to operate after being submerged in swamp water for ten minutes. Kalashnikov took that lesson to heart.

Despite its success, the SKS was always a stopgap solution for the Red Army. Captured German Sturmgewehr-44 (StG-44) rifles showed the way to the future. But the Soviets didn’t rip off the German weapon. Russian gunmaker Vladimir Federov designed and produced an intermediate cartridge automatic rifle in 1916, so the concept was not new. Federov recognized the value of the smaller cartridge to recoil control, especially in automatic fire. The weight savings for the soldier was valuable as well. No Russian intermediate caliber existed at the time, so he used the Japanese 6.5mm cartridge, which was smaller and lighter than the standard Russian 7.62x54R.

Kalashnikov no doubt had access to the StG-44 by 1945. But despite assertions to the contrary, the designs of the two rifles are quite different. This isn’t a technical article, but Kalashnikov’s AK-46 and AK-47 rifles show evolutionary design elements from the SKS (gas system and recoil spring), the Tokarev SVT-40 (recoil spring and double stack, double feed detachable magazine), the M-1 Garand (2-lug rotating bolt, trigger group, and possibly the bolt carrier/operating rod), and the StG-44 (stamped steel receiver, ribbed gas tube, and long stroke gas piston with gas rings).

Keep in mind that there was no such thing as a patent in the Soviet Union. Everything belonged to the State. Policy required sharing of available information and technology. Weapons design is influenced by what came before, like all technology. Mikhail Kalashnikov took the best of what he saw, employed his natural ability and experience, and came up with a winner.

The AK is Born

The AK-46, his first try at the new rifle, was rejected. The AK-46 was chambered in 7.62×41 and lacked some of the features of its successor, such as the final form of the gas piston. The charging handle was also on the left side. Kalashnikov was close, though, and encouraged to continue. The next year saw the AK-47 win the trials and earn adoption by the Red Army. A lack of accuracy with the new 7.62×39 cartridge was a concern, but the rifle’s robustness was more important. They ironed out the accuracy issues later. Only two years after entering service, the SKS was obsolete but, again, the Soviets knew, and hoped, that would happen.

Kalashnikov showed he had learned from his experience with the submachine gun and carbine trials too. The AK-47 was simple, durable, and reliable. Simplicity combined with looser tolerances allowed it to absorb punishment from the elements, including swamp water, and keep running. The AK-47 is remarkable in many ways, but its reliability is legendary.

There are some who say that Hugo Schmeisser, who was instrumental in developing the StG-44, actually designed the AK-47, with Kalashnikov receiving the official credit. Kalashnikov vehemently denied that rumor, and for good reason. There is no evidence to support it. The operating systems and ergonomics are different, other than being designed for the human form. As Forgotten Weapons host Ian McCollum says, “Form follows function.” All rifles are designed for people to use. And people are generally laid out the same, whether Russian, German, or whatever.

It is true that Schmeisser worked for the Soviets at the Izhevsk Arsenal after the war. But Kalashnikov did not begin work at Izhevsk until 1948, the year after the AK-47 was accepted. The only real contribution that Schmeisser seems to have made was to help the Soviets learn to make stamped steel components. Though Kalashnikov designed the AK-47 for a stamped receiver, Soviet technology couldn’t get it right. That’s why the first AK-47s are of milled steel. Schmeisser knew the process and the Soviets worked it out by the late 1950s, leading to the introduction of the stamped receiver AKM in 1959.

The AK-47 was not revolutionary. Kalashnikov combined proven design elements and the experience of past failures to create something whose sum was greater than its parts. I contend that the AK-47 was evolutionary because of those influences. Technology is not created from whole cloth. It builds on what came before. But it takes the right person with the right vision to pull all those things together. That’s what Kalashnikov did, and he did it brilliantly.

Mikhail Kalashnikov never reaped much financial benefit from his invention. He lived in the Soviet Union. That’s just how it was. He did receive many medals and honors, including earning a Doctor of Technical Science degree in 1971. He won just about every medal the Soviet Union could bestow on him for non-combat service and retired as a major general.

Today, there is a statue of Kalashnikov in Moscow’s Red Square. Russia issued a special postage stamp in 2019 to honor his 100th birthday.

His hometown of Kurye hosts a museum dedicated to his life and work. The Memorial Museum of M.T. Kalashnikov is in the old school building where Kalashnikov received his early education. It contains a re-creation of his office, complete with a bearskin rug, his workbench, design table, and other artifacts like uniforms and his personal firearms. 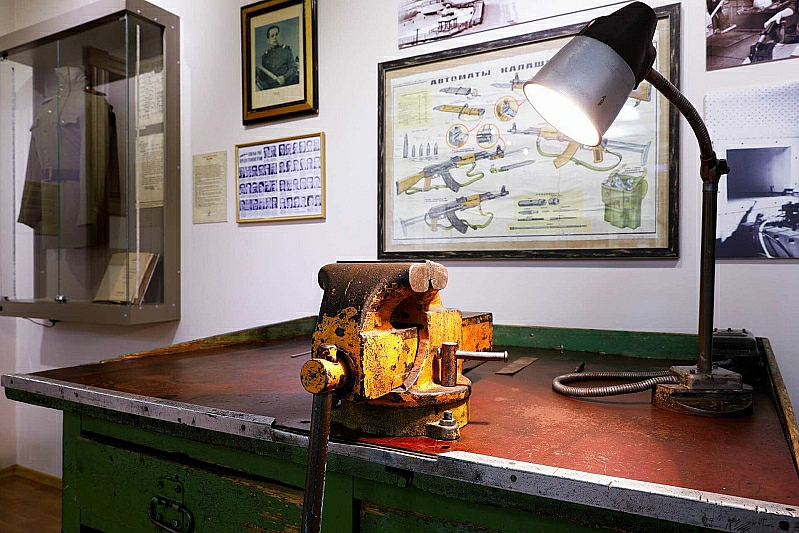 Toward the end of life, Kalashnikov wrote to the Patriarch of the Russian Orthodox Church expressing his worry that he was to blame for all the people killed with the rifle he designed. “I keep having the same unsolved question,” he wrote, “if my rifle claimed people’s lives, then can it be that I…a Christian and an Orthodox believer, was to blame for their deaths?” The Patriarch told Kalashnikov that he “was an example of patriotism and a correct attitude toward the country.” He added that “the Church has a well-defined position when the weapon is used in defense of the Motherland. The Church supports its creators and the military, which uses it.”

Covert and Crazy — The Special Weapons of World War Two