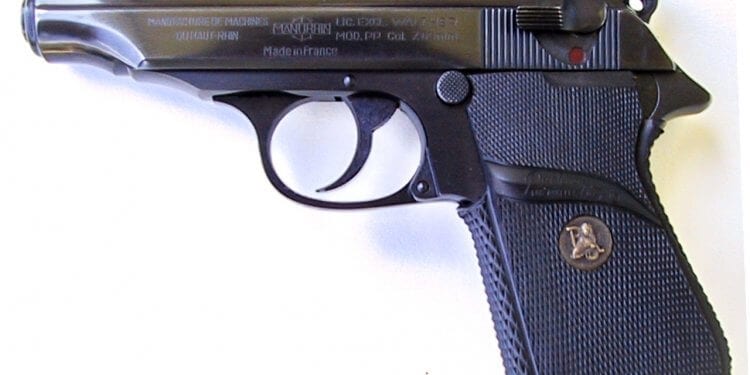 Some years after I bought my Walther PPK/S restoration project, my wife and I ran across something a little weird in a Tampa area gun store.

In the case, it looked like a Walther PP. It had a beautiful blued finish, the expected double-action with a safety / de-cocker lever just as you would expect, and plastic grips. This pistol was a .32 ACP, and parts were fit like those on a fine watch. It appeared to be in mint condition and even came with the original box – a reddish cardboard one with a pebbled finish.

Things got weird when I looked more closely at the slide. The first thing I saw was “Made in France.” Shortly after finishing up with the airsickness bag, I noticed a “Manurhin” logo just above that. Apparently thankful that I didn’t mess up his floor, the gun salesman proceeded to educate me on exactly what I was looking at.

A Manurhin PP with its original box (not a PP or Walther PPK). Apparently pistols destined for a police officer had the officer’s name printed on the box too. Photo: TexasGunTalk.com / OIF2

Anyway, with Walther equipment and know-how, the French company made pistols from 1952 until about 1986. Even some of newer pistols in that date range marked with German slides were made in France.

So enough about the history, let’s talk about the pistol itself. The PP (Polizeipistole or police pistol) model is a blowback design so the barrel is fixed to the frame. As this PP is a .32 ACP caliber, that works just fine as the mass of the steel slide is plenty enough to delay and control the recoil action. Since the barrel is fixed, it also acts as a guide rod of sorts for the recoil spring which wraps around the barrel itself.

The PP sports an exposed hammer and classic double-action / single-action operation. The first trigger press (when the safety / de-cocker lever is in fire mode) cocks and releases the hammer. From then on, everything operates in the single-action mode with a short, easy trigger press.

In the years we’ve had it, there have been no problems digesting any type of ball or hollow-point ammunition, even though it’s a classic design. That’s an interesting, even if unintended “feature” for an old gun designed to shoot only ball ammo. For carry, we’ve swapped out the original grips for rubberized Pachmayr models. The sights are still teeny, tiny steel post and notch so popular in the first half of the 20th century. They’re great for precision but not so hot for fast or defensive shooting. If you appreciate precision machining, real metal, and fine slick operation, it’s a fine little pistol.

Who knew that the French were capable of producing other items of quality besides fine wine and attitude?