4 Lessons I learned from Hurricane Matthew 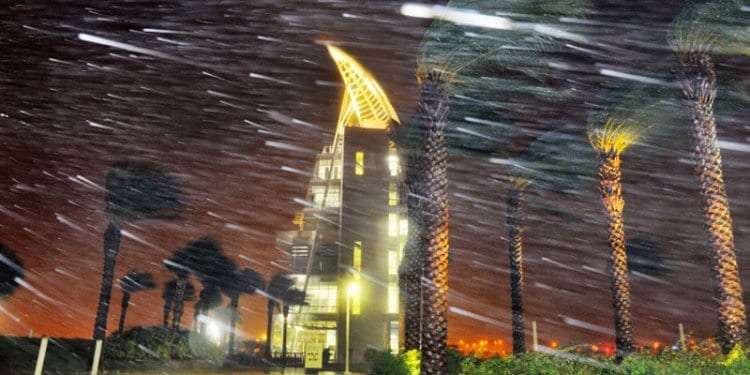 This is my first October entry into GunMag Warehouse’s blog, and to be honest, I had initially planned on penning something about Glocks or suppressors, but Mother Nature had different plans. Last week I was at Big 3 East near Daytona Beach, FL. The event was supposed to last until Saturday, giving a handful of writers a chance to meet with some companies in a more intimate setting than larger events like SHOT Show, allow.

Unless you’ve been living under a rock, you know that Daytona was exactly where Hurricane Matthew landed last Thursday. As such, my buddy Nick and I decided to get out of dodge, and head North and then inland towards my house in South Carolina. While I don’t live on the coast, my area was hit pretty hard with 75 percent of the residents being without power within the first eight hours.

As of writing, some folks are expected to be without power for an additional six days. This means some people are going to have to make do with what they have, for eight days. I was fortunate in that I didn’t even have to wait a full 48 hours for power to be restored, but in that short time, this experience with Hurricane Matthew taught me a few lessons about being a prepared gun owner during a natural disaster.

Lesson 1: Some people are awful.

Despite being some 60 miles inland from the nearest beach, Hurricane Matthew managed to knock out 128 roads and 3 bridges — in my small town alone — within the first few hours of landfall in the Carolinas. On Friday morning around 7:00 am, the power went out in my area —and within two hours, looting began at a local pharmacy.

These unscrupulous individuals didn’t simply make off with pain killers and opiates, but also reportedly antibiotics and other life-saving medicines. Point is, don’t expect bad guys to wait a reasonable amount of time before looting (if such a thing even exists) — they are criminals after all, so logic and morals aren’t their strong suits.

What can you do to be prepared? Stock an extra week or so (at least) of any critical medications, and don’t expect pharmacies to have the meds you need in the wake of a disaster. Many medications are temperature sensitive, and even if not stolen by looters, they will expire once power is cut to a pharmacy’s HVAC unit.

Lesson 2: Gas will run out days before the storm hits Even though the United States didn’t get hit by Hurricane Matthew nearly as hard as Haiti, and even less so further inland, plenty of people treated the event like the apocalypse — buying out all gas and non-perishables from gas stations and convenience stores.

I saw this primarily on my drive back from Daytona along the coast, particularly in Georgia. Florida residents along the border seemed unconcerned with the impending storm, presumably because this wasn’t their first rodeo. Along I-95, roughly 80 percent of all gas stations we passed had lines around the block, with the remaining 20 percent having been sucked dry of every last drop of gasoline.

You may be thinking, “So what?  I intend to stay put during a disaster!” Keep in mind, you’ll need to get reserves of fuel for your generator from these same stations, which brings me to an important side note: don’t store your fuel or your running generator indoors. No, not even inside your garage.

Every year, some poor fool gives himself carbon monoxide poisoning, because he left the equivalent of a running car inside his garage. Gasoline, too, is equally as dangerous when kept in large quantities inside an enclosed space, but obviously for different, more explosive reasons.

The preventative measure to take in regards to gas shortages is to simply have enough on hand (kept inside an appropriate container) to run your generator sparingly for a few days. That doesn’t mean powering your whole house, but supplying power to a well-pump if you’re off the grid, or to heating in the winter. Prioritize the essentials, and take 5-minute showers to preserve fuel.

Lesson 3: Two-point slings are worth their weight in gold

Do you know what’s more awkward than sharing an elevator to the 50th floor with a crazy ex? Carrying a rifle around all day while performing chores and general maintenance.

While single-point slings are great for tactical stuff and freeing up a hand for using a sidearm or manipulating light switches, total hand-free retention of a long gun is much preferable. Why not simply get a pistol and a good holster? Well, first off, you should have that already. But, if a mob of looters was to show up at your home, would you feel safer with a 9mm Glock and, at best, 17+1 rounds of ammo, or an AR-15 with 30 rounds in a regular magazine? Keep in mind the AR has a longer range, is much easier to shoot accurately, and can be used as a club in a pinch.

On a plus side, if you live out in the sticks like me, having a carbine or rifle on your back can act as a great deterrent to criminals of opportunity. Not every looter will be a hardened bad-ass, many could just be desperate people.

Regardless of how you feel about firearms as a deterrent, having the ability to carry your rifle with you all day while still keeping both hands free is invaluable.

Lesson 4: Keep your magazines loaded, batteries charged, and your finger off the trigger. 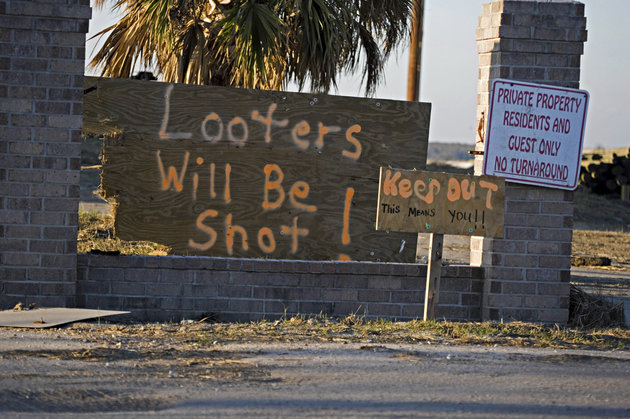 The first part of this is obvious: if you need a loaded magazine in total darkness, you’re already screwed yourself. I personally like to keep three 30-round STANAG magazines loaded for either my X95 or my SIG 516 within arm’s reach. Three loaded mags are enough to deal with anything short of a fire team charging your house but are light enough to store in cargo pockets.

The day after Hurricane Matthew left our area, word came down from other houses that suspicious people were wandering through backyards dressed in winter clothing in the middle of a tropical storm. This is where the second part of this lesson comes into play.

Identifying a possible threat, and distinguishing it from dumb kids is next to impossible at night without some form of illumination. This is why it’s important to keep both a simple, crappy flashlight for non-crucial lighting, like navigating your home to reach the bathroom — and a second, high-powered flashlight to ID intruders on your property. In both these cases, you’ll need batteries. So don’t waste the tac-light batteries on taking a leak, save those for, “bumps in the night”.

This brings me to the final portion of this lesson: keeping your finger off the trigger. You should already be doing this unless you’re ready to fire. That said, in what your brain might believe is a fight-or-flight situation, your instinct is to get ready for war.

Turns out, those suspicious fellows spotted in backyards, were actually a combination of first responders wearing heavy rain gear, and a few teenagers from a local shelter giving workers a hot cup of coffee as a thank you for their hard work. Putting a bullet in either would ruin more than a few lives.

Bottom line: keeping a level head in any bad situation is the key to making the best decision.

Sometimes you get that luxury, other times not. Lastly, the above lessons don’t exist in a bubble. Stock up on water, non-perishable food, and personal hygiene items in case whatever situation you’re in lasts longer than expected.  Above all else, be safe, be deliberate. EMS will be dealing with bigger fish than some guy who fell off a ladder while boarding up his second-story windows.