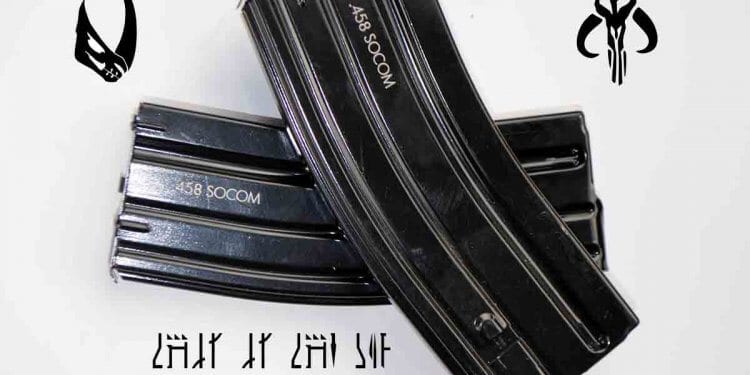 This is an interesting AR build. It was put together by a Star Wars fan in the same homage sort of way some of our writers have built their art guns. The aptly titled “Beskar Build” is Mike Searson’s take on a Mandalorian gun, chambered in .458 SOCOM. That means, of course, either modified AR15 magazines or a purpose-built 458 SOCOM magazine is required to feed it. 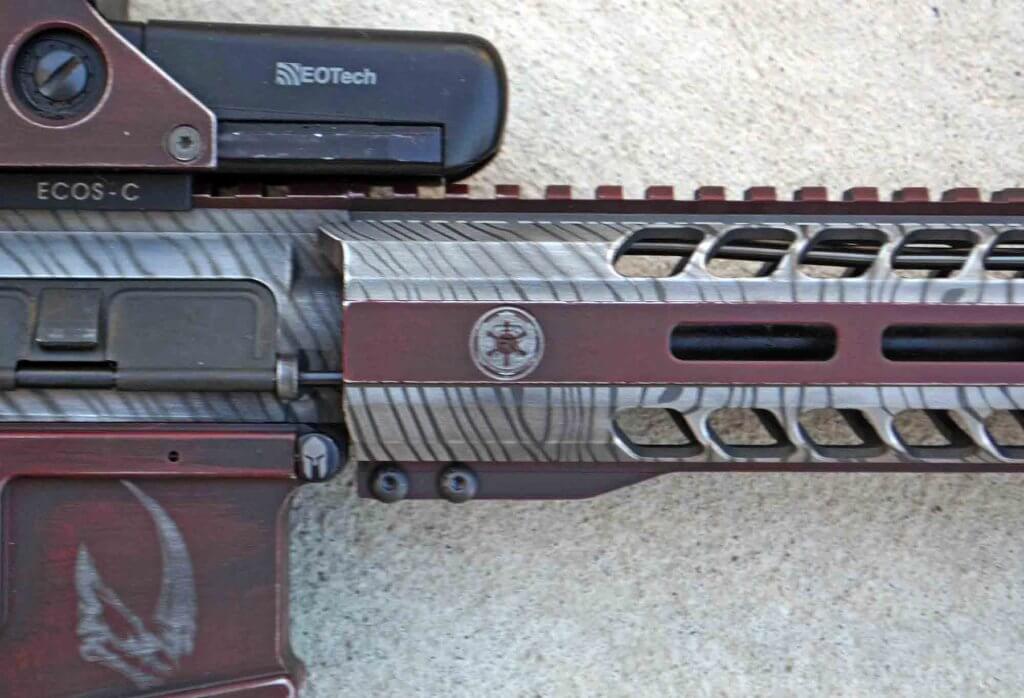 The weapon has an interesting Cerakote scheme and several nods to Mandalore the Great’s various descendants.

The rifle is comprised of a Radical Firearms 458 SOCOM upper receiver on a (fittingly enough) billet “Battle Born” lower receiver from Reno Guns and Range. The “paint scheme” (so to speak) was done by a fella named Russ, from Nevada Cerakote. Additional pieces hail from Rise Armament, Hogue Grips, Magpul, EOTech, LaRue Tactical, and other manufacturers.

We bring this to your attention because, 1) we enjoy Mando’s ongoing adventures and sense of humor as much as the next person, and 2) as the article’s writer Mike Searson says,

“458 SOCOM was designed with AR platforms in mind; primarily the original 5.56 versions. Standard magazines can be used for the bigger caliber, but do have to be modified slightly, and the sheer size of the round significantly reduces magazine capacity. A lot. It turns your 20-rounders into 7-rounders and your 30-round magazines into something that’ll hold just 10 or 12, though some companies do make a dedicated 458 SOCOM magazine.”

And we have just such a selection of .458 SOCOM mags in the warehouse!

Duramag magazines for the 458 SOCOM cartridge.

This is what the build looks like if you’re curious.

Sadly, it isn’t actually Beskar, and it doesn’t have two bident-style prongs sticking out the front, but this is still a handsome Mandalorian gun. Good for hunting big game like feral boar for sure…maybe not so much for a krayt dragon.

Read the full description over on Breach-Bang-Clear.