We are tirelessly working through an incredibly high volume of orders. See current processing times at checkout and know that your order will be filled as fast as humanly possible.
Product was successfully added to your shopping cart.
Related Products 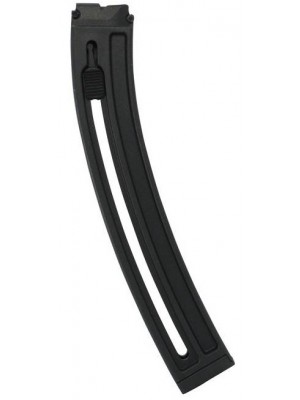 Walther U.S.A. manufactured this magazine for the H&K MP5 rifle, chambered in .22 long rifle. The maximum capacity for this magazine is 10 rounds.

Walther Arms has been a leader in the firearms industry for almost 130 years. Walther has been renowned throughout the world for its innovation since Carl Walther and his son, Fritz, created the first semiautomatic pistol in 1908.

The Heckler & Koch MP5 is a 9mm submachine gun of German design, developed in the 1960s by a team of engineers from the German small arms manufacturer Heckler & Koch GmbH (H&K) of Oberndorf am Neckar. There are over 100 variants of the MP5, including some semi-automatic versions. The MP5 is one of the most widely used submachine guns in the world, having been adopted by 40 nations and numerous military, law enforcement, intelligence, and security organizations. It is widely used by SWAT teams in North America.