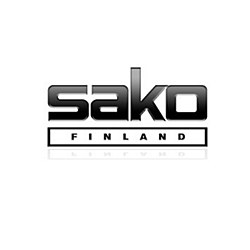 Since before World War II, Sako has been earning its reputation as one of the world’s best producers of precision rifles and cartridges, which has continued since becoming a member of the Beretta holding group just a few years ago.

Formed just two years after Finland declared its independence from the Russian empire, Sako opened in a former Helsinki brewery to recondition captured Soviet weaponry so that it would reach their higher standards for quality and reliability.

Since then, Sako has committed painstaking effort to carefully manufacturing, inspecting, and test-firing each weapon to ensure maximum quality. In 1983, they incorporated fellow Finnish manufacturer Tikkakoski and began producing Tikka rifles—now well-known for their amazing value and performance.

Sako focuses on offering a wide variety of calibers and construction on just a handful of its most proven and reliable platforms. The Sako Model 85 is geared towards hunting and typically finished with a walnut stock, steel trigger guard, and double-stacked stainless steel magazine. With three different action sizes and over a dozen calibers to choose from, the Model 85 is an inspired choice for hunters and target shooters all over the world.

The Sako Model A7 is a more modernized, lightweight polymer rifle with a special steel action and a 70-degree bolt angle for lightning-fast cycling. The Model A7 only features two action sizes (Small and Medium) and impact-resistant polymer magazines.

With a focus on developing ultra-accurate bolt-action rifles for hunting, competition, and long-range shooting, Sako’s extensive line of heirloom-quality production rifles come with factory magazines that are just as reliable and well-built.

Sako rifles are inspected and approved according to C.I.P. standards and sold with a 2-year warranty to ensure superior craftsmanship and built quality.