California Residents: Please click here for an update.
Shop By 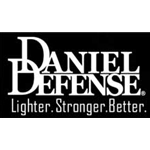 Daniel Defense: Turning One Man’s Dream into the Country’s Most Trusted Provider of AR-15 Parts & Accessories

When Marty Daniel needed a $250,000 loan to fund his new startup, he bet the farm—quite literally staking his family’s fourth-generation farm as collateral for his loan.

And shortly thereafter, in 2006, Marty’s tiny new business went head-to-head with each of America’s biggest defense contractors to win a SOCOM contract for their Rail Interface System (RIS II).

Since then, Daniel Defense has continued to build their reputation and following one accessory at a time—from their initial “Big Hole Upper Receiver” to their LW Rail System for the United Kingdom’s L85 rifle, to overmolded AR-15 grips, DDM4 upper receivers and flash hiders.

Eventually, Daniel Defense had enough unique parts and offerings to build a whole rifle all their own; with offerings like the DD4 and DD5 V1, along with the Ambush family of hunting-oriented AR-15 rifles.

Daniel Defense even offers their own Armorer’s Course to help law enforcement agencies and gunsmiths make the absolute most out of each product and accessory they offer.

One product at a time, from one battle to the next, Daniel Defense has established themselves as an industry leader whose gear can be trusted for peak performance in practically any environment. The same is true for their factory magazines; combining features like enhanced 32-round capacity with strengthened feed lips, aggressively textured grips, high-visibility followers and impact-absorbing baseplates into a coherent patent pending design that’s perfect for combat, competition, or just everyday target shooting.